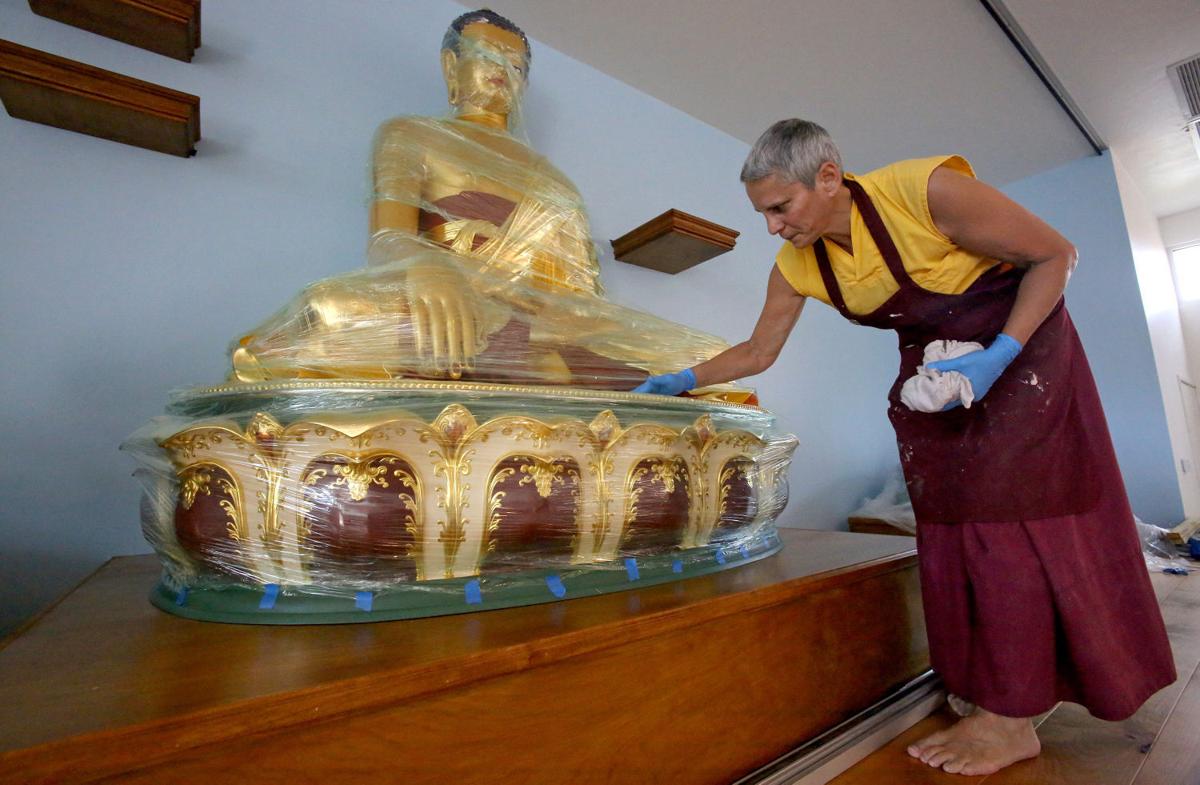 Lead artist Kelsang Gewang removes the dust and other small debris around an 8-foot tall golden Buddha statue after it was moved into place in the main meditation room at the Kadampa Meditation Center, 5326 E. Pima St. 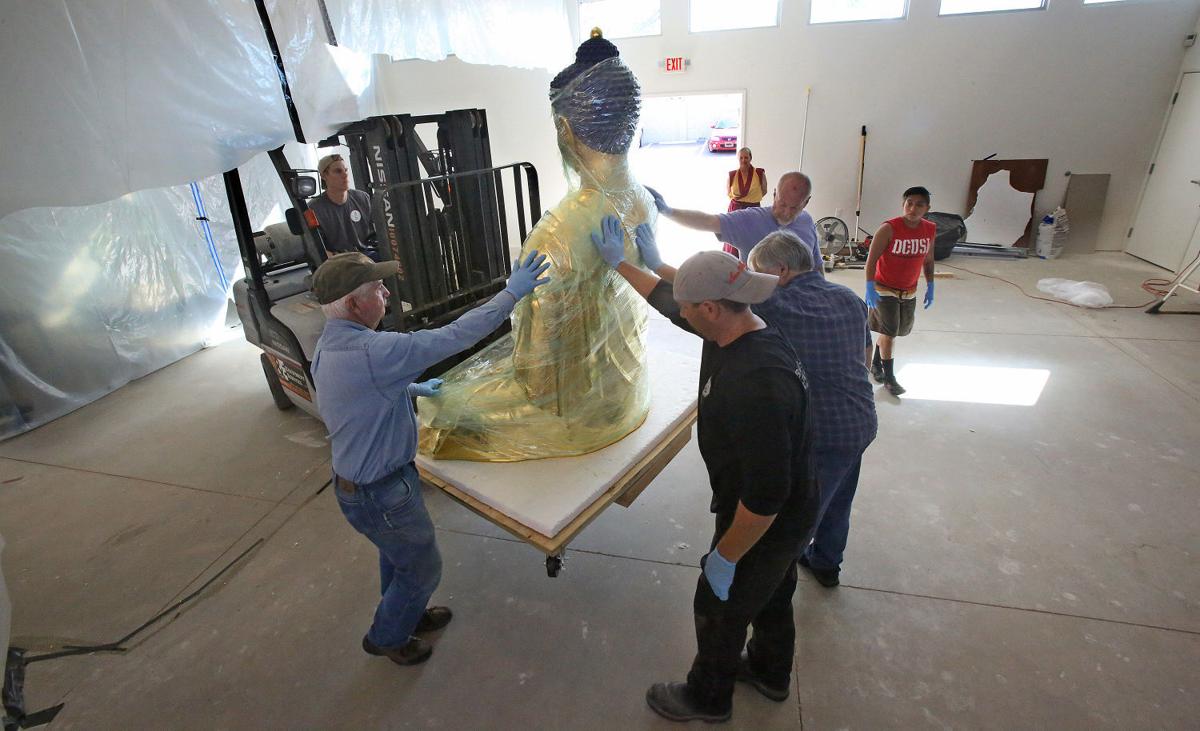 Using a forklift, a group moves an 8-foot tall golden Buddha statue while being supervised by Gabriela Buendia, far right, inside the main meditation room at the Kadampa Meditation Center.

The Kadampa Meditation Center Arizona has a new location with a big upgrade.

At the previous location, the meditation hall could hold only about 80 people. The new hall at 5326 E. Pima St. can fit 250 meditators.

And an 8-foot-tall gilded Buddha statue.

In 2012, the temple, then called the Tara Mahayana Buddhist Center, was appointed the main center for the state, hosting all the special events and guest speakers who come to Arizona, said Gen Kelsang Lingpur, the center’s resident teacher. The appointment prompted the move and name change.

Lingpur started the center in 2002 with classes in the Little Chapel of All Nations on the University of Arizona campus with six of seven attendees. In 2004, the growing group moved into its first temple — a former Jehovah’s Witness Kingdom Hall in a residential area near Broadway and Campbell Avenue.

The New Kadampa Tradition emphasizes presenting Buddhist teachings in a way that modern people can understand and was founded by Geshe Kelsang Gyatso. It falls within Mahayana Buddhism, one of the religion’s three main branches. There are about a dozen centers of the New Kadampa Tradition across the state, including a temple in Phoenix, Lingpur said. The Tucson center has about 100 regulars now.

From Friday, Oct. 16, to Sunday, Oct. 18, the Tucson temple will host a grand opening at its new location.

Lingpur guesses that the selection of her temple as head center in the state may have something to do with the few years Gyatso spent in Tucson about 15 years ago.

“He was writing books (here), and it caused some special karma for Tucson,” she said.

The construction of the new facility began more than a year ago and includes a new building and remodel of a space that once hosted the child development program The Parent Connection.

Lingpur estimates the price tag of the entire project comes in around $900,000, financed by private donations, the sale of the center’s old building and a mortgage.

Like other New Kadampa Tradition centers, the Tucson temple seeks happiness and compassion through study and meditation.

“We wish to obtain Buddhism so that we can help others,” said Catherine Krasnow, the center’s education programs coordinator. “We feel like at moments when we try to help others, we see it go awry because we lack the wisdom to know what they really need. Only a Buddha has this wisdom, so that is what we would like to become.”

The new facility is already hosting three classes each week in a smaller meditation room. Through retreats, classes on Buddhist teachings, guided meditation and chanted prayers, the center has options for all levels.

In addition to the large meditation hall, the new temple will also have a book store and gift shop, a community room, a commercial kitchen and a small apartment for staff.

Lingpur guesses that the new temple is “probably three times the size” of the old facility.

What: The grand opening of the Kadampa Meditation Center Arizona includes ribbon cutting on Friday and classes on Modern Buddhism by the retired spiritual director of the New Kadampa Tradition, Gen-la Kelsang Khyenrab.

More info: For more detailed information about the classes or to register, visit meditationintucson.org/oct-2015-opening.

Dinner and a movie at Tibetan Buddhist meeting

It has a mission-style design, with groundbreaking set for October.

Religion and faith: Classes on Tibetan Buddhism to begin

A roundup of what's going on in Tucson's faith communities.

Lead artist Kelsang Gewang removes the dust and other small debris around an 8-foot tall golden Buddha statue after it was moved into place in the main meditation room at the Kadampa Meditation Center, 5326 E. Pima St.

Using a forklift, a group moves an 8-foot tall golden Buddha statue while being supervised by Gabriela Buendia, far right, inside the main meditation room at the Kadampa Meditation Center.