Step into The Village Church for Sunday evening vespers and make yourself at home.

The front entrance leads into a kitchen where dinner is already cooking — Hawaiian food on an evening in early May. Kids dart around in the backyard. Early arrivals lounge on couches in the sanctuary, waiting for the service to start.

There are no designated greeters, no churchgoers in their Sunday best.

About 80 adults and 50 kids call this community home, not just on Sundays but throughout the week. Many live within a few miles of the church and scribble their names on a detailed sign-up sheet, volunteering to cook, watch kids or clean bathrooms.

“Our community is very flat,” says Eric Cepin, one of the church’s two co-pastors. “Almost everybody in our church has a key to the building, which is kind of unheard of. They come in and clean and cook, and at some level feel, like the building is their home, too.”

In some form, The Village Church has existed since 2001, but moved into its current building at 1926 N. Cloverland Ave., about seven years ago, transitioning from a focus on college students and young adults to young families.

Beyond the hodgepodge of sofas and chairs in the sanctuary and the shared dinners following Sunday services, The Village differs from many other churches in its identification on its website as a “neo-monastic mega house church.”

That’s a fancy way of saying The Village doesn’t just talk about the values of the Bible, but is serious about living them — even when it’s messy.

The Village emphasized hospitality and community long before adopting the label “neo-monastic.”

“St. Patrick had his monasteries inside the townships and invited people in,” Cepin said, referring to a book he and co-pastor Rod Hugen drew inspiration from — “The Celtic Way of Evangelism: How Christianity Can Reach the West ... Again” by George G. Hunter III.

New monasticism is a movement within American Christianity that has roots in the 1930s, says Jonathan Wilson-Hartgrove, a leader in new monasticism and a 2003 founder of the Rutba House community in Durham, North Carolina.

The movement experienced a resurgence in the early 2000s “out of the sense that the established institutional churches in the culture became considerably compromised by their alliance with the powers that be, be that business or political or whatever,” he says.

Around 2010, about 100 communities identified with new monasticism, Wilson-Hartgrove adds.

That identification can vary in meaning. The Village, for example, doesn’t share daily meals or economic resources in a formal sense. It also differs theologically from communities that associate themselves with the emerging church movement.

The Village calls itself orthodox, and bases doctrine around the Apostles’ Creed and “values what Jesus is valuing,” including truth, authenticity and creativity, Cepin, 43, says.

Although Hugen, 63, and Cepin are ordained ministers through the Christian Reformed Church, The Village affiliates with no particular denomination and falls somewhere between evangelical and mainline Protestant traditions.

“I see a trend of post-denominationalism in these communities,” Wilson-Hartgrove said by phone from North Carolina. “People are more concerned with how faith calls them to live than with the particular tradition they grew up in.”

has something to offer

The kids at The Village squirm free during the opening and closing parts of the Sunday vespers service. A group dances in a back corner to live music, while others shake small maracas out of time.

Her oldest has Down syndrome and hasn’t always been well-received in other churches.

She isn’t the only one who feels this way. Ryan McCulley also has two children with special needs. More than acceptance, McCulley, 42, and his wife feel as though their 9-year-old daughter and 7-year-old son are treated like they have something to offer fellow churchgoers.

“We started the church, but really worked on empowering other people,” Brunson says. “Because it’s an organic model rather than organizational model, as people come in, that changes things about the church.”

Throughout the month, members might attend Pilgrim Groups (like Bible studies) and then monthly Monastic Communities, which focus more on community service.

“We have an autistic man on our leadership, and he has preached several times,” Cepin says. “In the middle of one sermon, he completely had a meltdown.”

“He said, ‘I’m having a panic attack. I’m going to sit down,’” she says. “And everybody was just like, ‘OK,’ and brought him a chair and a glass of water, and pretty soon he got up and went on.”

Because The Village “offers relationship that is long-suffering and is willing to be in-depth with people” who are struggling, financial stability can be challenging, Cepin says. Many in the church come from difficult backgrounds.

“This year, after 15 years, is the first year we’ll be fully self-sustaining as a community, meaning we can pay reasonable salaries to our pastors and the mortgage on our building,” he says.

“So what do you do with them?” he says. “If you say, ‘I’m not on the list’ and hide, then we’re going to confront you and not let it go. But if you’re here and repentant and sorrowful and honest, then we can talk about it” and get parents involved, perhaps restricting Sunday attendance or building access.

And people have been asked to leave.

“There’s no secret-keeping, because it’s not one-on-one; it’s collective,” says John Cepin, Eric’s father and a marriage and family therapist of more than 30 years. John and wife, Patti, have attended The Village for several years.

“You don’t get to hide here,” Hugen says.

When Cepin stands up to preach on the Apostles’ Creed in early May, he’s wearing a plaid shirt, ripped jeans and Nikes.

Every now and then, someone rises from a sofa, wandering out of the sanctuary to return with a mug of coffee or glass of water.

The casual atmosphere attracted Kristina Henry, who first discovered the The Village while church shopping for her cousin. Already a Christian, Henry had cut ties with church, mad after her brother’s suicide, and was using drugs.

“I came to The Village bringing someone else, angry with God, not intending to stay, just trying to get her comfortable,” Henry, 33, says. “She ended up not sticking with it, and I did, for some reason.”

A year and a half later, Henry, who has multiple sclerosis, says she has stopped using drugs and is making progress toward healing from a traumatic childhood.

Church members have picked her up from the hospital late at night after an MS flare-up and cared for her in the midst of guilt following a drug-use relapse.

“I had nothing at all, but now that I have something to look forward to, these people might love me and I might have a community. Now I have a reason not to do this,” Henry says. “If I have a problem, I call somebody.”

All are In process

The Village is liturgical with its commitment to certain rites — the singing of “Happy Birthday,” for example — yet casual in its style.

“The Village is traditional and liturgical in terms of following the Apostles’ Creed and having their own church rhythms, but in a way that’s really open and inviting to creativity and open for discussion,” says Corey Gilchrist, a 29-year-old member of the leadership team and musician in one of the church’s bands.

Most of its music is written in-house, based on biblical scriptures. Art made by members hangs on the walls.

A roundup of what's happening in Tucson's faith community.

Survivors Network of those Abused by Priests starts Tucson meetings

BRIEF: Training continues for those interested in hosting Bible study

Bible study sessions starting in the book of Genesis.

The Village Church doesn’t just talk about the values of the Bible, but is serious about living them.

30-minute film chronicling Tucson’s Christian heritage will get its premiere.

Religious or not, seekers of understanding gather in Sacred Space

A place for the spiritual and the secular.

The residents of Holy Trinity Monastery in St. David, Arizona — some permanent and some snowbirds — participate in the prayer schedule and wor…

Many have been coming to the quiet spot for years.

Chapel a hidden oasis on UA campus for 80 years

The ones who find it are those who need it most.

There they find a place to build relationships and work through doubts.

In 2006, Arizona Daily Star staff photographer Dean Knuth set out to show religion in Tucson through a series of single images – one a week. I…

The Rev. Robert Hendrickson III is 39. That's young for the Episcopal Church.

Christian actor's tour on strengthening marriages to stop in Tucson 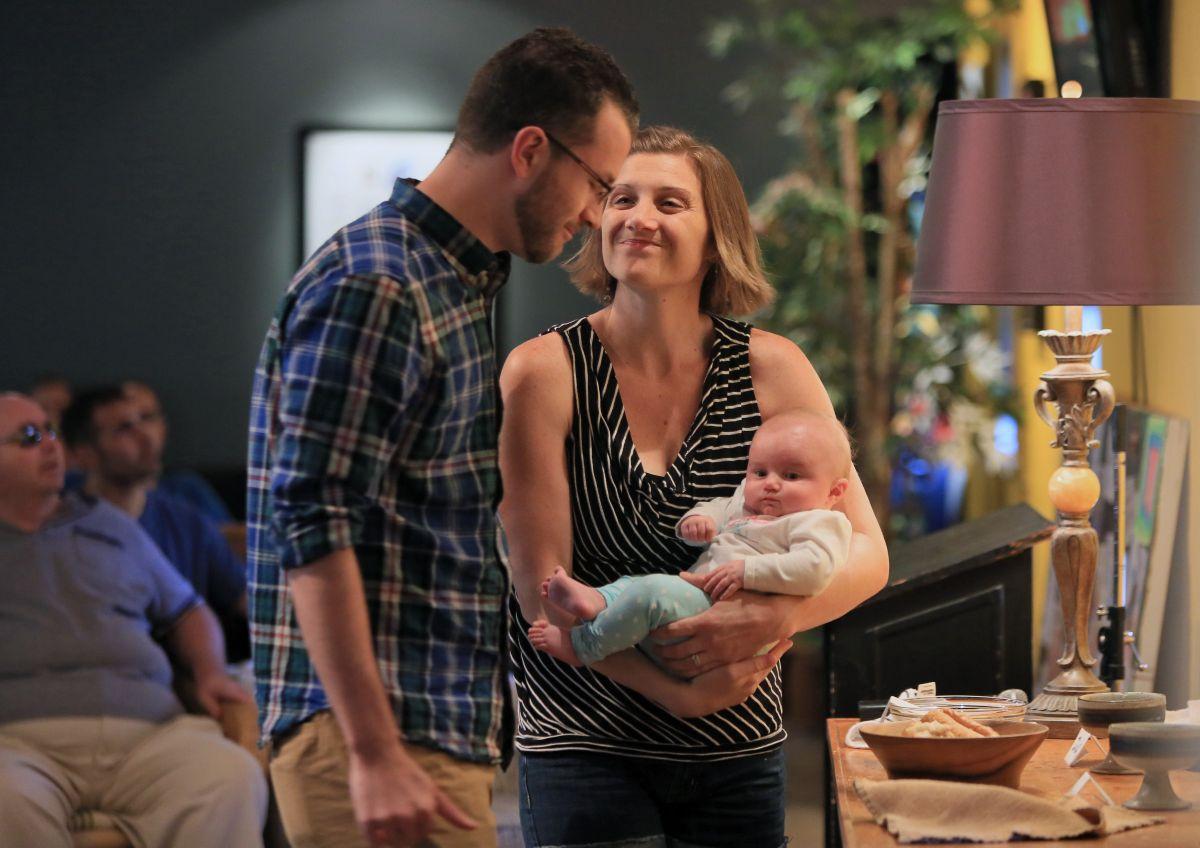 Coleen Gilchrist, holding baby Cate, shares a moment with her husband, Corey, at The Village Church. The church identifies itself as a “neo-monastic mega house church,” and has a more casual style than many other churches. 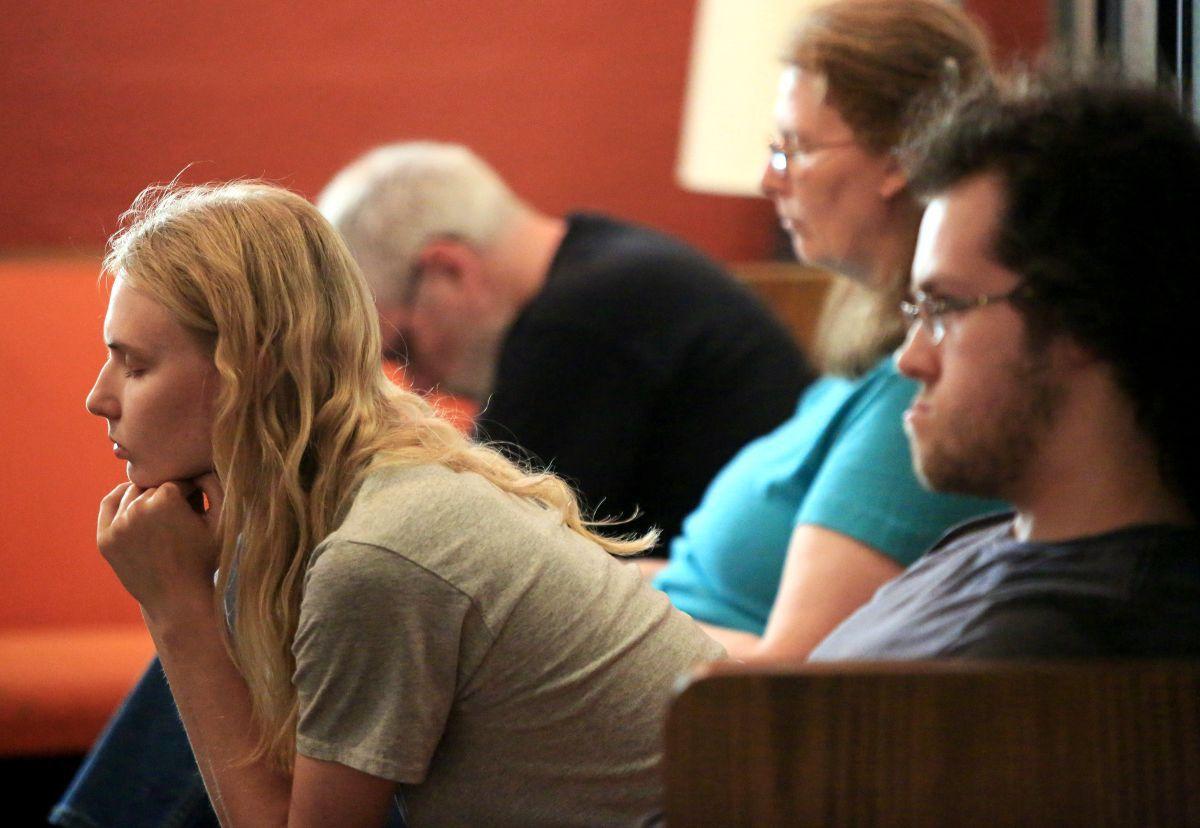 Fiona Williams prays during services at The Village Church. The church calls itself orthodox, and bases its doctrine around the Apostles’ Creed and values like truth, authenticity and creativity. 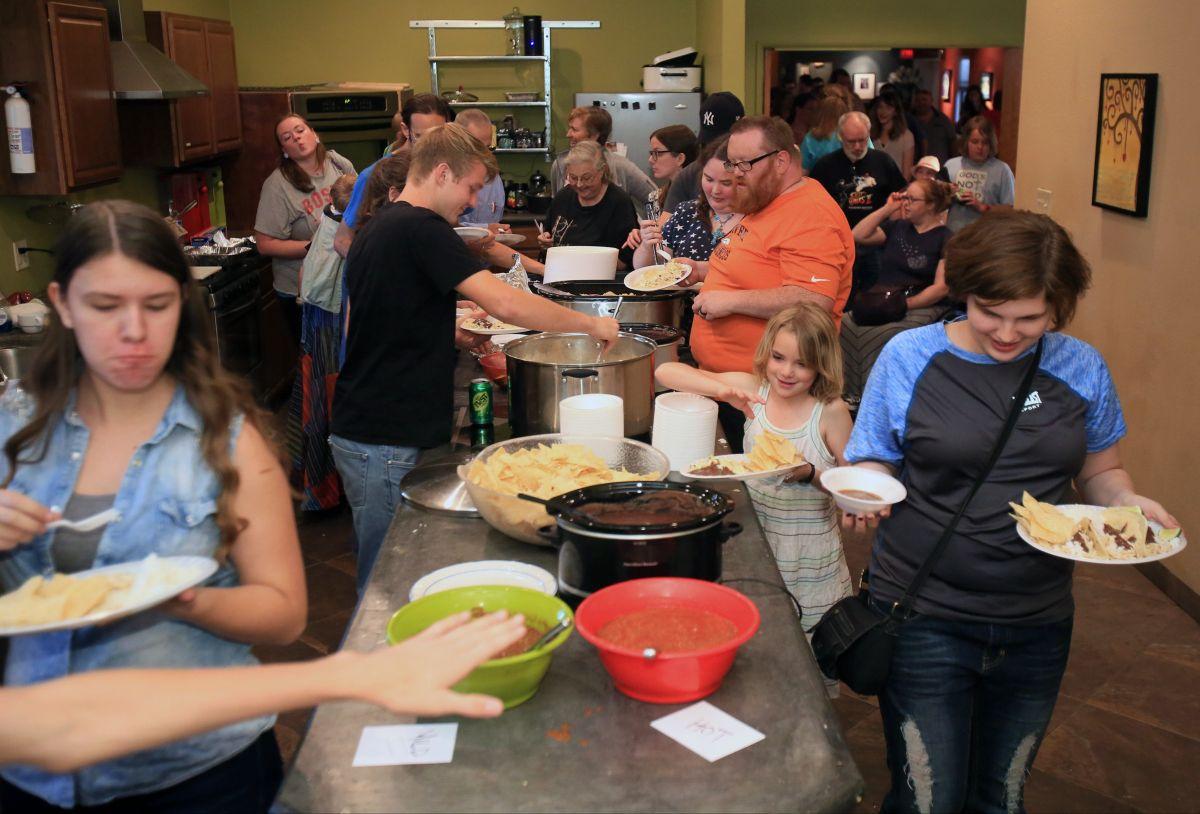 The kitchen is a hub of activity as church members gather for a meal following services on April 24. 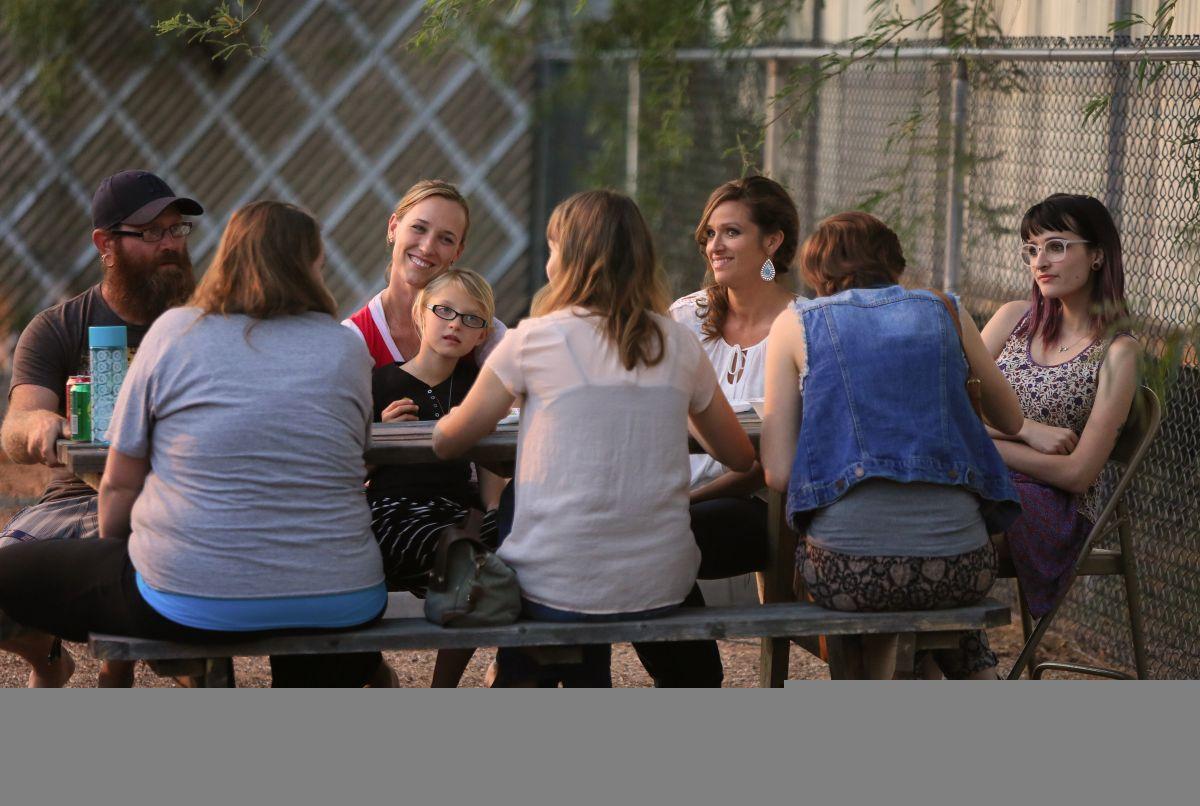 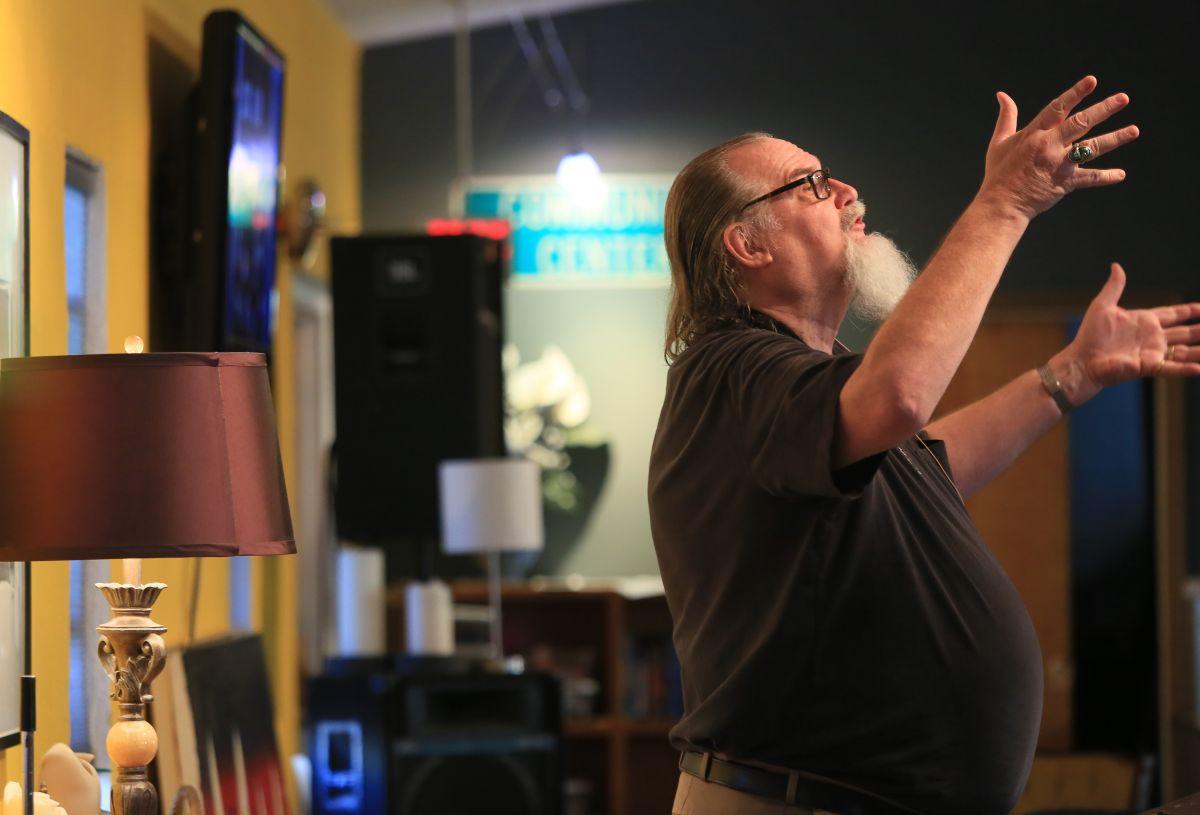 Pastor Rod Hugen lifts spirits at services at The Village, which does not affiliate with any denomination.