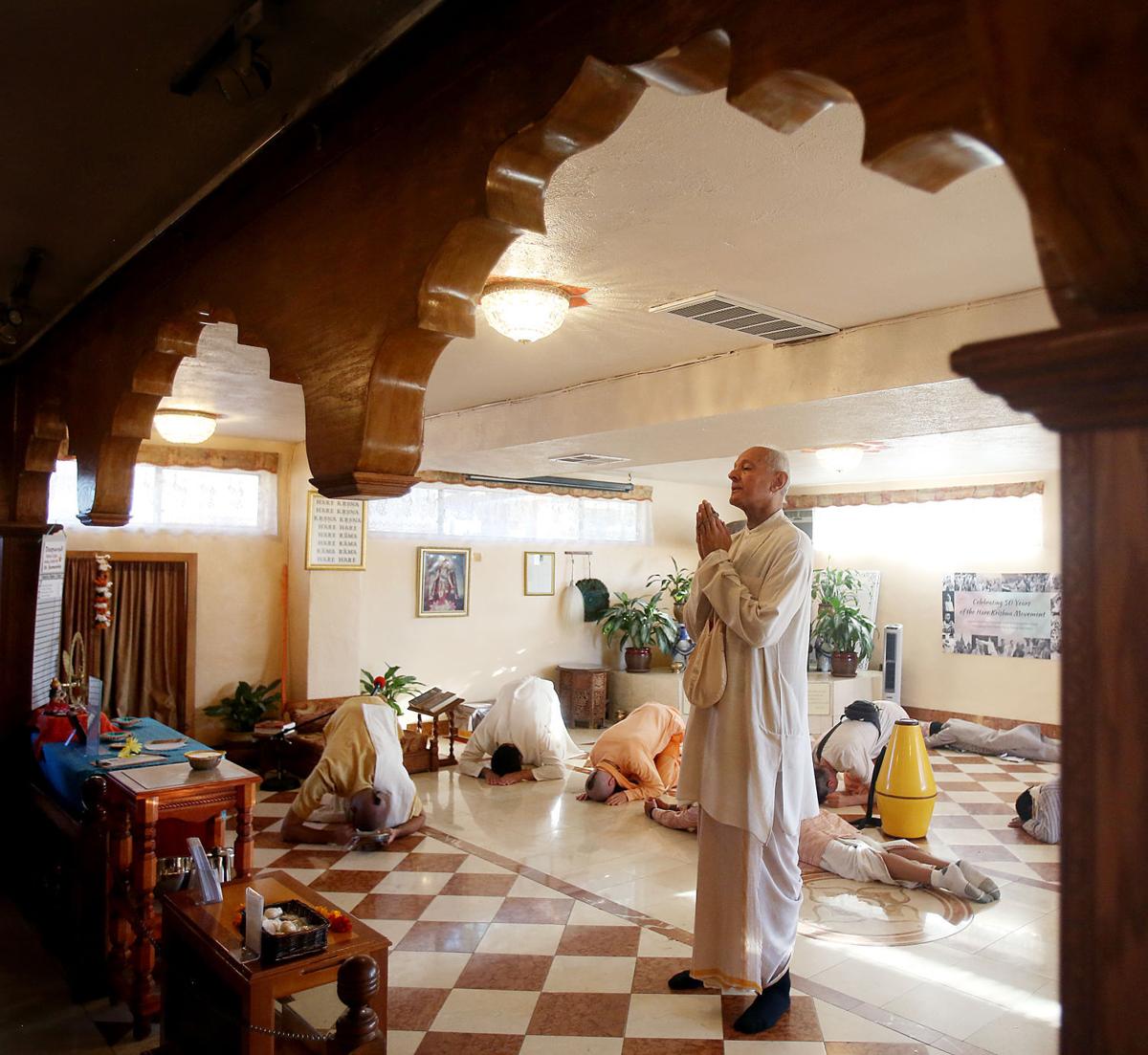 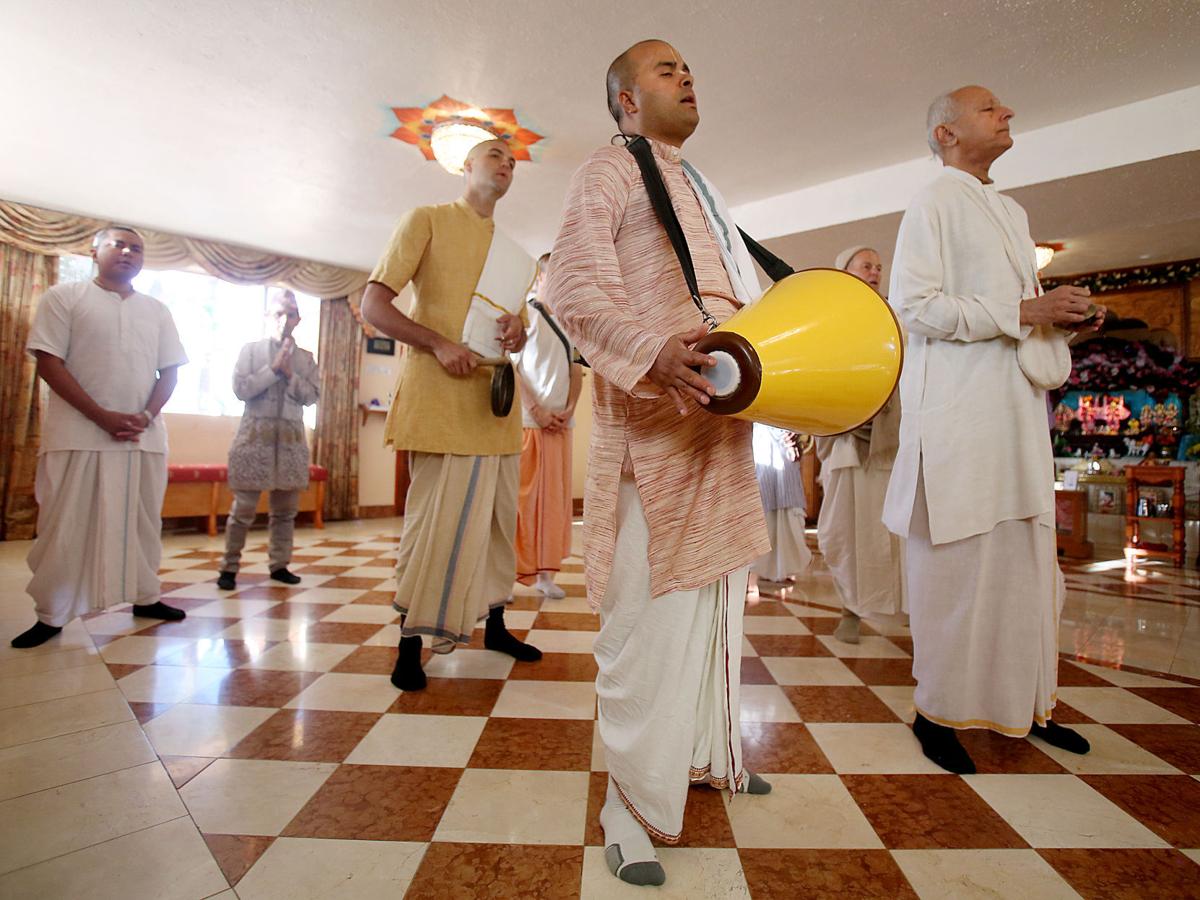 Kirtan Yajna Das, foreground, plays the khol, an Indian drum, during a morning service at the cultural center. Members of the Hare Krishna community are celebrating the 50th anniversary of the movement. 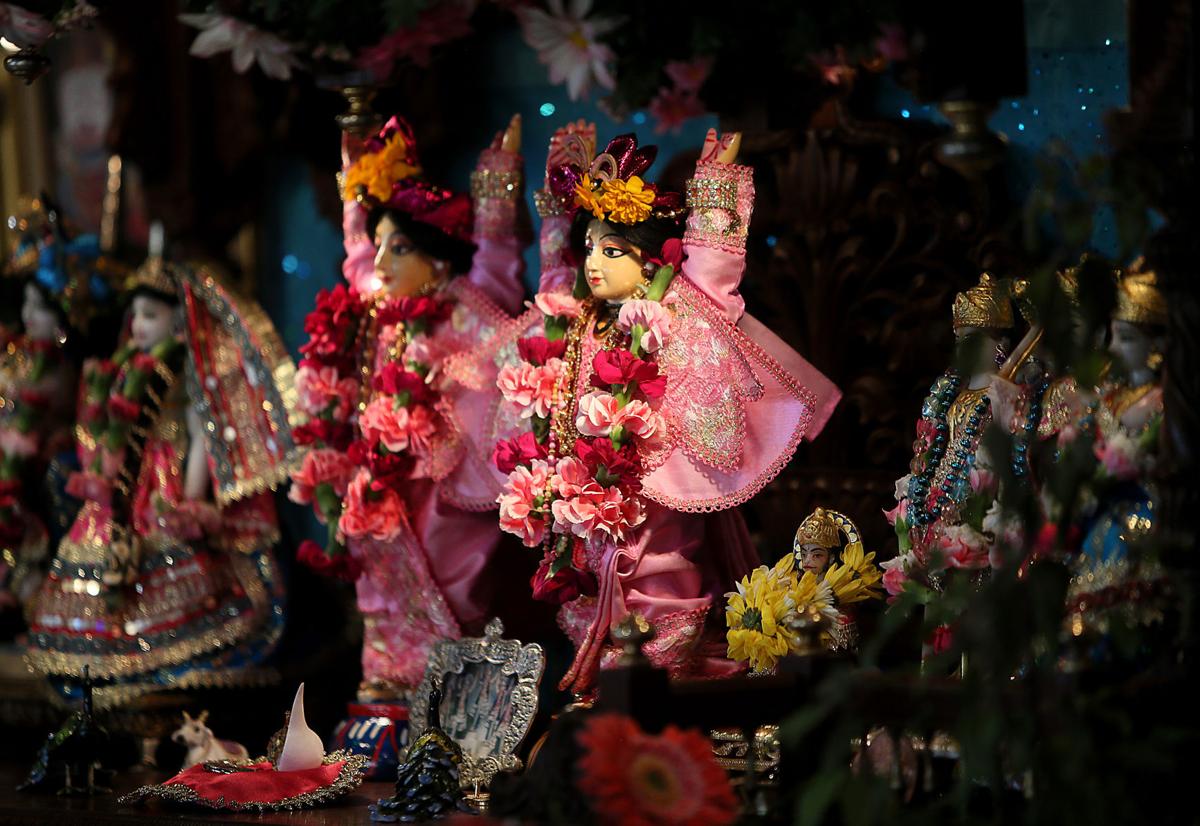 Deities are displayed in an altar for worship at the center. About 20 members live on site, with 100 more that attend services on Sunday evenings.

Hare Krishna devotees remove their shoes as they step into the meditation room each morning.

Outside, birds chirp and a waterfall cascades into a koi pond. It is quiet — for now.

The wail of a conch shell signifies the start of a ceremony and the room fills with music as devotees bow and chant, acknowledging both Krishna, a name for God in Hinduism, and A.C. Bhaktivedanta Swami Prabhupada, the founder of the International Society for Krishna Consciousness (ISKCON).

Looking back on 50 years

Around the country, Hare Krishna devotees are celebrating the 50th anniversary of the movement, founded in 1966 by Prabhupada in the United States. Earlier this month, Gov. Doug Ducey congratulated the movement on the anniversary.

To celebrate, Tucson’s temple shared a meal Saturday with religious leaders from other faith traditions, a nod to the movement’s desire for people to connect with the spiritual, even through other religions. The mayor also spoke at the gathering.

“Our mission is to re-spiritualize society in a nonsectarian way,” said Atula Govinda Das, a 29-year-old who has lived on site for about four years. His legal name is Aaron Lieberman.

But in 21st-century America, devotees have their work cut out for them.

In a material society prone to over-schedule, many Americans put soul-searching on the back burner — not to mention the rising number of individuals who choose not to identify with any particular religious tradition.

The Hare Krishna movement “comes from within Hindu tradition, and it expresses itself in a unique way with modern society,” said Konden Smith, a visiting professor of religious studies at the University of Arizona. “It’s responding to a global world.”

“(Society) wants to acquire fame and wealth and be in control,” Lieberman said. “Krishna Consciousness wants to put spiritual development back in the center of society.”

In the last 50 years, the movement has grown globally and within the United States.

There are about 60 temples nationwide and about 600 around the world, in addition to farms, restaurants and schools, said Anuttama Dasa, the international director of communications for ISKCON and a member of its Governing Body Commission.

The Tucson temple opened in 1987 at 711 E. Blacklidge Drive, followed by the vegetarian restaurant Govinda’s Natural Foods Buffet in 1992.

With about 20 members living on site and a congregation of about 100 showing up for Sunday evening services, Tucson’s community is on the smaller side, said Sandamini Dasi, legally Sharon Cooksey.

In its lifetime, the movement has changed its emphasis to support congregations of devotees that don’t all live on site.

“The lifestyle is different from mainstream America,” said Cooksey, the president of the Tucson temple. “It’s for everybody, but not for everybody deeply.”

Cooksey and her ex-husband Dasarath Das, or Charles Cooksey, founded the only other official ISKCON temple in Arizona in Phoenix about 10 years after opening the center here.

As far as she knows, Sharon Cooksey is one of three women presidents running Hare Krishna temples in the U.S.

“Tucson is a unique place,” said Lieberman. “There are a lot of seekers in Tucson ... I grew up in the South, and I see more open hearts and minds in Tucson.”

Although the Tucson congregation has not grown in “leaps and bounds,” the restaurant is hopping, Sharon Cooksey said.

When the restaurant is open, the meditation room doubles as a meal hall, with a partition separating diners from the divine.

Right now, temple leadership is considering opening a satellite Govinda’s maybe on the east side or near the University of Arizona, Cooksey said.

“We consider vegetarian food like communion,” Cooksey added. “It has a spiritual component that purifies. ... Almost like eating your way back to God.”

Vegetarianism is one of the vows taken by devotees, along with commitments to abstain from intoxication, sex outside of marriage and gambling. Those vows help the devotees abide by the four pillars of the tradition: truthfulness, cleanliness, mercy and austerity.

One of the main spiritual texts is the Bhagavad Gita.

“We are part of the Vaishnava tradition, which refers to a monotheistic or theistic devotional tradition within Hinduism,” said Anuttama Dasa.

Once known for showing up in airports to sell literature in saffron robes, the movement has toned down its approach in recent years, followers say.

Gone is the sentiment: “We have to convert the world by tomorrow,” Cooksey said. The movement grew quickly in the beginning, attracting overzealous young people.

In these 50 years, the movement has had to contend with public opinion shaped by fanatical proselytizers in years past, issues of leadership following Prabhupada’s death in 1977 and allegations of child abuse surfacing out of ISKCON boarding schools in the ’90s — all issues that have been addressed, said Anuttama Dasa.

Nori Muster, a real estate teacher at Mesa Community College, left the movement in 1988 after 10 years as a devotee in Los Angeles. Working public relations and writing for an ISKCON publication, she clashed with leadership over attempts to make over a magazine with more in-depth reporting, she said.

Her book about the experience “Betrayal of the Spirit: My Life Behind the Headlines of the Hare Krishna Movement” joins other critical voices of the movement.

The Tucson temple, founded in the late ’80s, missed much of the controversy, Cooksey said.

Still, in 2010 her ex-husband Charles Cooksey was put on probation by the Governing Body Commission, according to a notice of probation published by the independent Sampradaya Sun.

Her ex-husband was put on probation for “criticizing not the principles of Krishna Consciousness but the leaders,” said Sharon Cooksey. At that point, the couple was already divorced.

Cooksey, 62, encountered the movement as a young woman working in downtown Cincinnati.

Raised in a Catholic home, “I had questions that I felt weren’t answered properly,” she said. Western religion had let her down, so she turned to the East, learning about karma and reincarnation from a Hare Krishna devotee.

Lieberman, 29, also felt like the movement connected him to God in a way that his Christian upbringing and the modern world did not. Now, his lifestyle is a simple one.

“There was a lot of growth in the beginning,” Cooksey said, of the movement that slowed in growth after the death of Prabhupada. “It’s growing now, attracting not just young people, but all walks of life.”

They want to see churches as places of unity, reconciliation.

The International Society for Krishna Consciousness (Hare Krishna) celebrates 50 years in the United States this year.

Muslims boost efforts to show they're part of Tucson, too

The movement is celebrating its 50th anniversary this year.

They spent one month in a tent and five months in the fellowship hall.

Kirtan Yajna Das, foreground, plays the khol, an Indian drum, during a morning service at the cultural center. Members of the Hare Krishna community are celebrating the 50th anniversary of the movement.

Deities are displayed in an altar for worship at the center. About 20 members live on site, with 100 more that attend services on Sunday evenings.