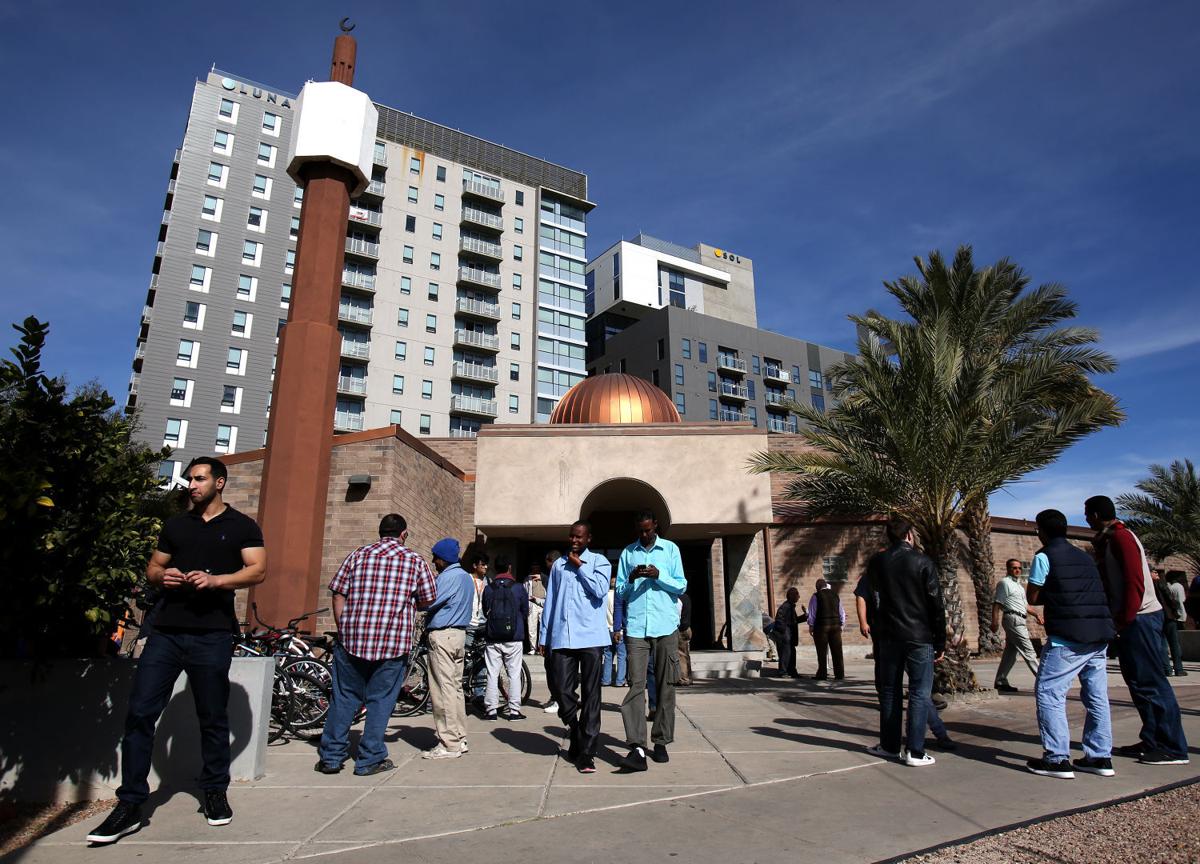 Islamic Center of Tucson, in foreground. 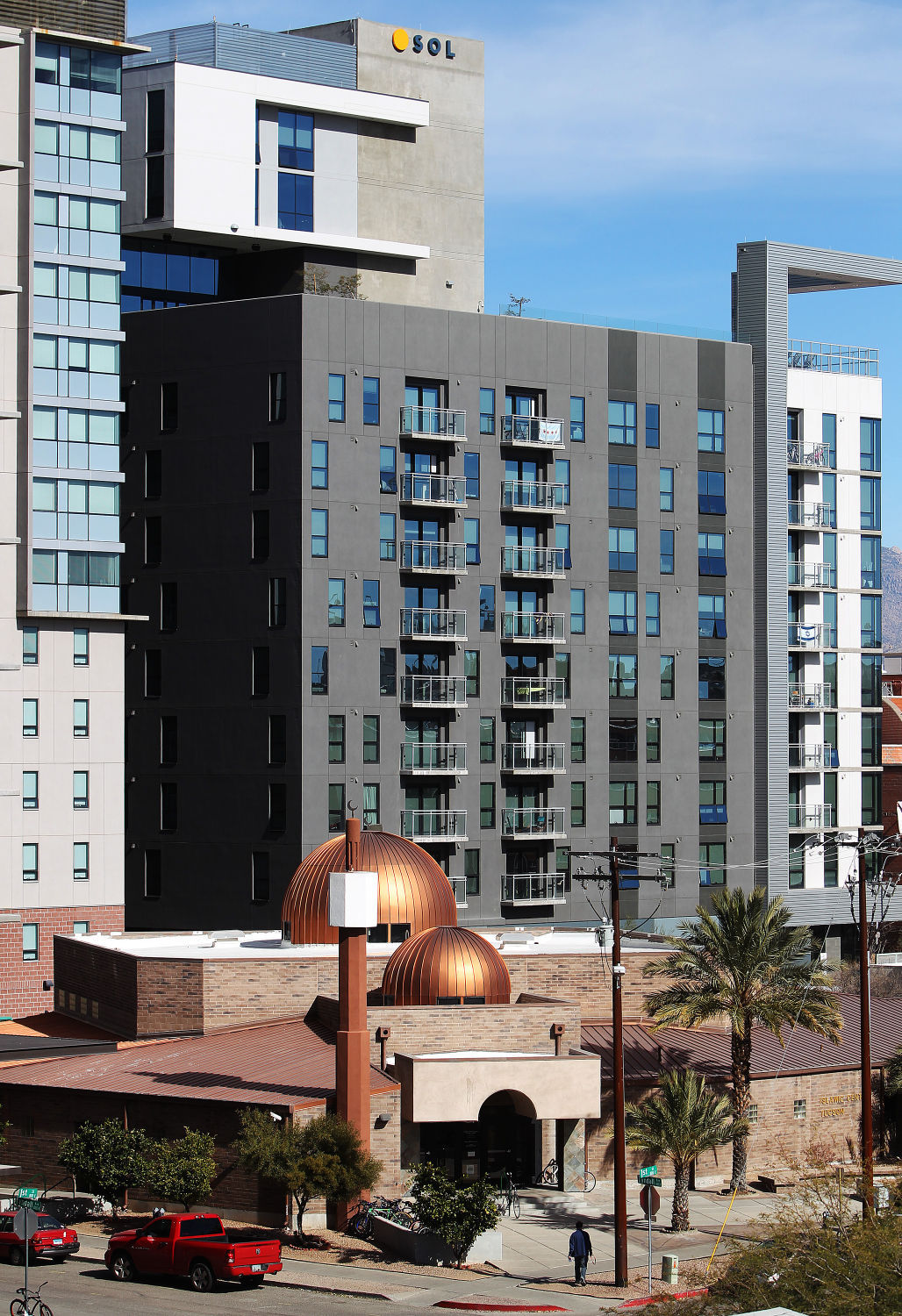 Residents at a high-rise student housing facility near the Islamic Center of Tucson once again tossed alcohol bottles and other objects from their balconies into the mosque’s parking lot.

Three times last week — the first week of classes for the University of Arizona — members of the center arrived to find debris littering the parking lot.

“It’s quiet for a while, and then it happens again,” said Ahmed Meiloud, the president of the Islamic Center of Tucson, 901 E. First St. “Sometimes it escalates, and sometimes it’s a small incident.”

Thursday, GMH Capital Partners, the Pennsylvania-based company that has owned the Sol Y Luna apartments since fall 2015, sent out a letter to residents condemning the behavior and promising retribution, including fines and evictions.

“GMH Capital Partners and its affiliates will not tolerate any actions involving violence or destructive behavior towards any other human being or organization, nor will any words or actions that reflect racial or religious hostility be condoned at any of our properties,” reads the letter, signed by Rand Ginsburg, the senior vice president of asset services for the company.

The apartments, which were previously known as Next and Level and owned by Denver-based Cardinal Group Management, house 389 and 588 beds respectively, said Bruce Pilarczyk, senior vice president of marketing and public relations for GMH Capital Partners.

“We’re looking through video tapes now and working with local police to figure out what happened,” Pilarczyk said.

If an individual can be identified through the video, “we will fully pursue eviction as well as turning them over to the authorities or school,” he added.

A sample copy of the lease for Level, the building that is now called Luna, was still on the facility’s website on Thursday. The lease noted: “Tenant understands that in the event that ANY items come off a balcony or window, Tenant will be subject to an immediate $1,000 fine and potential eviction and shall be subject to criminal prosecution. Any investigation of alleged incidents will be reported to the University of Arizona and local authorities.”

Pilarczyk said the website is currently being updated, but the actual lease still includes the right to evict and fine residents based on inappropriate behavior, particularly on the balconies.

The Islamic center first made the issue public in the fall of 2014, after more than a year of dealing with residents dropping glass bottles, trash and other objects into its parking lot.

In response, surveillance cameras were installed at both the mosque and apartments, evictions were served and the UA and the city hosted a public forum.

Pilarczyk said the company knew of that history when it took ownership last fall and intends to develop a similar forum with Ward 6 City Councilman Steve Kozachik in addition to sensitivity training for residents.

“People wonder why I have this issue with these out-of-town student housing projects,” he said. “It’s because you flip them and you’re back at square one again.”

Kozachik said he spoke on the phone Thursday morning with Pilarczyk and Ginsburg about next steps and will meet with a representative from the company, the Tucson Police Department and the Islamic Center next week.

Pilarczyk sees the sensitivity training as a recurring program, as students cycle through the housing complex. Sol is at 1031 N. Park Ave. and Luna is at 1020 N. Tyndall Ave.

“They need to understand the gravity of what they are doing and the ramifications for their future as well as the harm it could cause someone else,” he said. “And not just the physical part, but we also don’t have tolerance for racial slurs.”

What household items need cleaning everyday and what can wait

Residents in high-rise near UA to be evicted

Misbehavior by students could lead to balcony ban near UA

The idea is to prohibit balconies above the third story unless they face an interior courtyard.

Mosque to be built on Tucson's northwest side

Muslim Community Center to submit drawings to county next week.

Children learn about Ramadan with arts and crafts

Children are not required to fast for the holy month of Ramadan, though many do for smaller increments of time. Even those who do not fast cel…

Items fall into the parking lot of the Islamic Center of Tucson from neighboring high-rise student housing apartments. Courtesy of the Islamic…

Unruly behavior at student apartments has neighbors fed up

But Islamic Center is upbeat at UA meeting regarding off-campus housing.

City and UA officials will discuss solutions, including increased security and enclosing balconies.

Four males have until Monday to leave, or can protest evictions.

Security around UA-area mosque to be increased

The vandalism reached a fever pitch this past homecoming weekend.

City official looking into whether apartment owners can be cited under nuisance laws.

Glass bottles, alcohol were recently thrown onto property of Islamic Center near the University of Arizona campus.

Islamic Center of Tucson, in foreground.