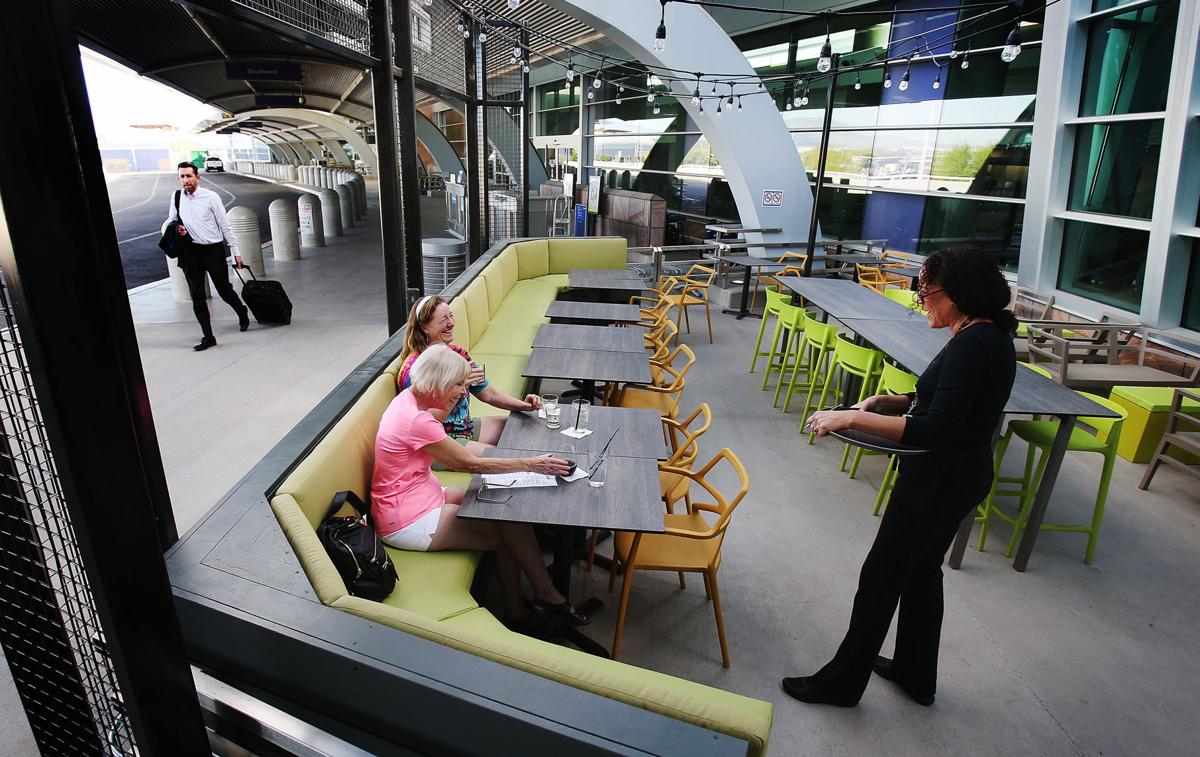 Waitress Kim Blackhawk converses with sisters Tina Nemeth, left, and Rita Huppe on the patio of the new Noble Hops at Tucson International Airport. It is one of two concessions in the pre-security area. 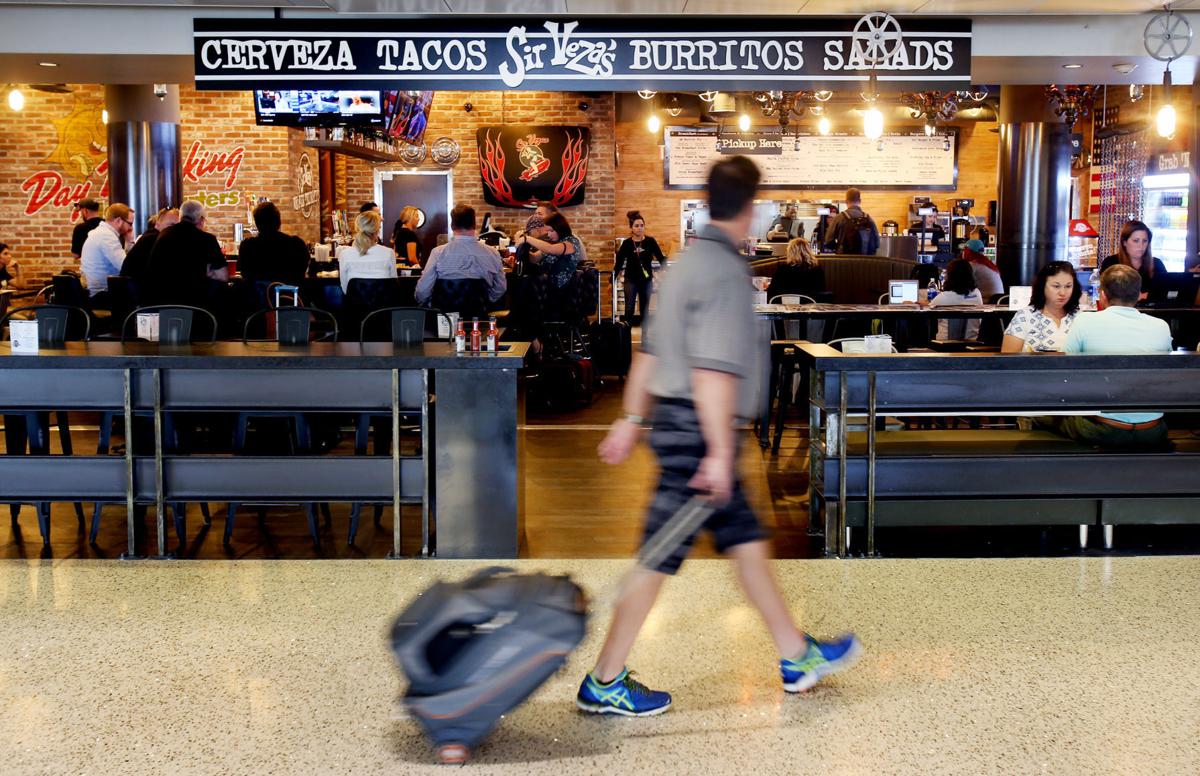 Travelers can now enjoy a new Sir Veza’s location in Concourse A at the airport. The restaurant is part of the $28 million “A Brighter TUS” program. 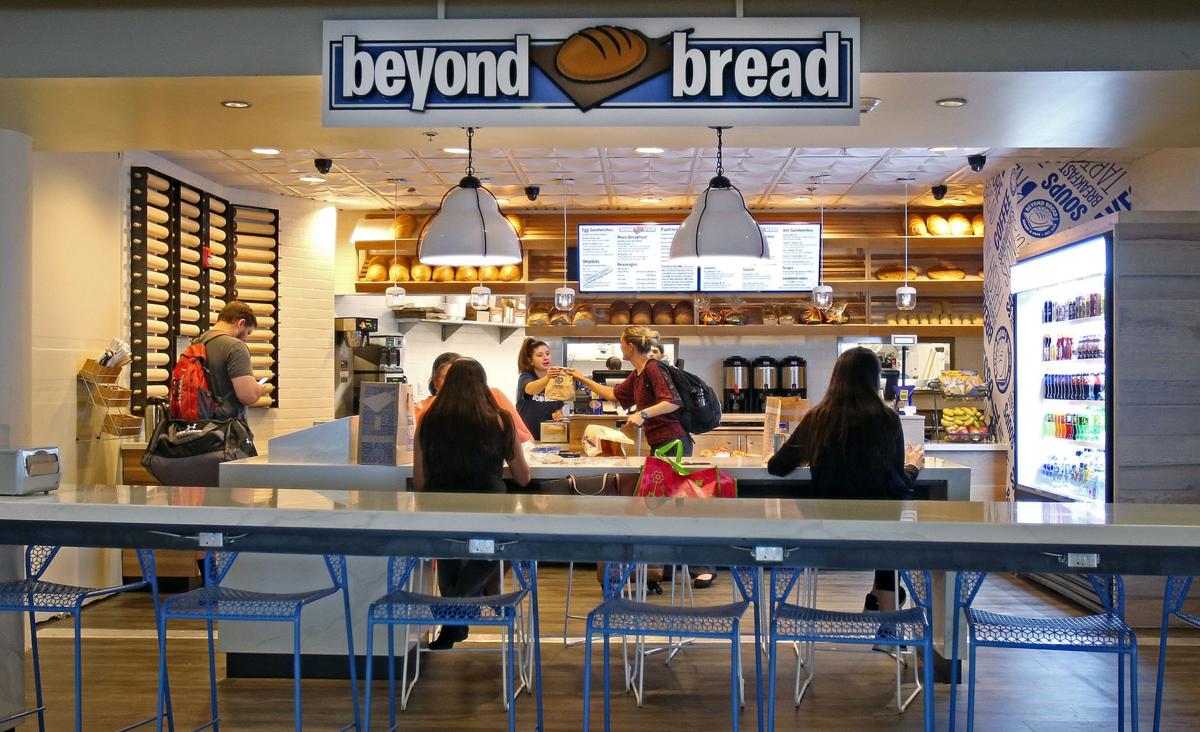 Minutes after noon last Friday, as travelers gathered around the baggage-claim carousels at Tucson International Airport and a couple gave their tearful young grandson a final hug, Carmen and Ernie Schank were kicking back on the patio of the months-old Noble Hops brew pub not far from the American Airlines ticket counter.

It was the first concession to open in the airport’s expansive culinary makeover, part of the $28 million “A Brighter TUS” project that started last March to improve passenger terminals.

Noble Hops, modeled after the Oro Valley restaurant of the same name and borrowing a streamlined version of its gastropub menu, is one of two concessions in the pre-security area, meaning you don’t have to have a plane ticket or go through a security checkpoint to have a pint of Tucson Barrio Blonde and the popular housemade mac ’n’ cheese. (Arbuckle’s Coffee opened last week near the lower level baggage claim.)

The restaurant has a wraparound full-service bar with flat-screen TVs and a small dining room with a handful of tables, but it is the patio with its mint-colored puffy benches and chairs overlooking the TIA parking lot that has proved to be a big draw. That and being on the ticketing level creates opportunities for the brewpub to become a go-to restaurant/bar for guests from the nearby hotels, said Noble Hops manager Morgan Jeffcoat.

“We get lots of people who come from the hotels that don’t have restaurants or bars, or they may be closed by the time (travelers) get in,” Jeffcoat said at the beginning of the lunch rush last Friday as the barstools filled up and passengers loaded down with luggage plopped into the half-dozen dining room tables.

Customers who spend $15 can get their parking validated, which creates another incentive for nontravelers, Jeffcoat added.

Near the gates, ticketed passengers can now have a taco or burger and beer from the truncated version of Sir Veza’s Taco Garage or a sandwich and pastry from Beyond Bread — two more recently opened local concepts getting some airport love.

Sir Veza’s and the arrival early next year of El Charro marks the Flores family’s return to the airport after a 20-year absence, said Ray Flores, who created and operates Sir Veza’s. The Flores family’s El Charro had once been a primary airport vendor until the job become too much to handle. He said they have learned a lot since that experience after opening restaurants in Phoenix Sky Harbor Airport and at the MGM Grand Hotel & Casino in Las Vegas.

Almost all of the restaurant concepts that will be sprinkled throughout the airport as part of “A Brighter TUS” have Tucson ties, including a bar inspired by The Maverick Live Country Club set to open early next year near the A Gates on Concourse A. The only national chains heading to the airport are Dunkin’ Donuts, Bruegger’s Bagels and Built Custom Burgers — the first Arizona outpost of the California fast-casual chain.

The Tucson restaurant owners don’t really make any money in the deal, said Flores and Noble Hops owner Suzanne Kaiser. But the exposure is invaluable, both agreed. Jeffcoat said he and his staff are quick to let customers know the airport restaurant’s origin.

“I have people ask ‘Why Noble Hops?’ and we tell them it’s a gastropub in Oro Valley,” he said, as a server delivered the Schanks’ hot dogs and pretzel to their patio table.

Schank said the prices were pretty reasonable; the Sonoran hot dog was $6 and the pretzel that came with housemade cheese sauce was $9. And at a nearby table on the patio, three Texas airmen were enjoying local beer and soaking up the Tucson sun one last time. After a week working in Tucson, they were heading home.

“This is awesomely positioned so that you don’t have to go through security,” said Bryan, who didn’t want to give his last name due to his military position. “This is kinda neat.”

Other Tucson-inspired restaurants opening early next year include Empire Pizza, inspired by the popular downtown pizzeria, opening on Concourse A near the A Gates. Mixta Express Kitchen, a second Beyond Bread location, El Charro and Thunder Canyon Brewery are all near the B Gates on Concourse B.

Change in Tucson airport concessions means layoffs; many to get new jobs

Many being laid off are expected to be rehired.

Construction in high gear for new concessions at Tucson airport

El Charro, Beyond Bread, The Maverick, Noble Hops and other local companies to open sites at Tucson International Airport.

Southern Arizona Urgent Care to open its ninth site on Campbell and Sixth.

American Airlines to offer nonstop between Tucson and Charlotte, N.C.

The conference aims to motivate and inspire existing and aspiring business owners.

Shoes, apparel and other merchandise are marked down 10 to 30 percent.

Restaurant next door to Charro Steak is family's foray into seafood.

On National Nurse's Day, doughnut shop is celebrating everyone helping out in the coronavirus pandemic.

Waitress Kim Blackhawk converses with sisters Tina Nemeth, left, and Rita Huppe on the patio of the new Noble Hops at Tucson International Airport. It is one of two concessions in the pre-security area.

Travelers can now enjoy a new Sir Veza’s location in Concourse A at the airport. The restaurant is part of the $28 million “A Brighter TUS” program.