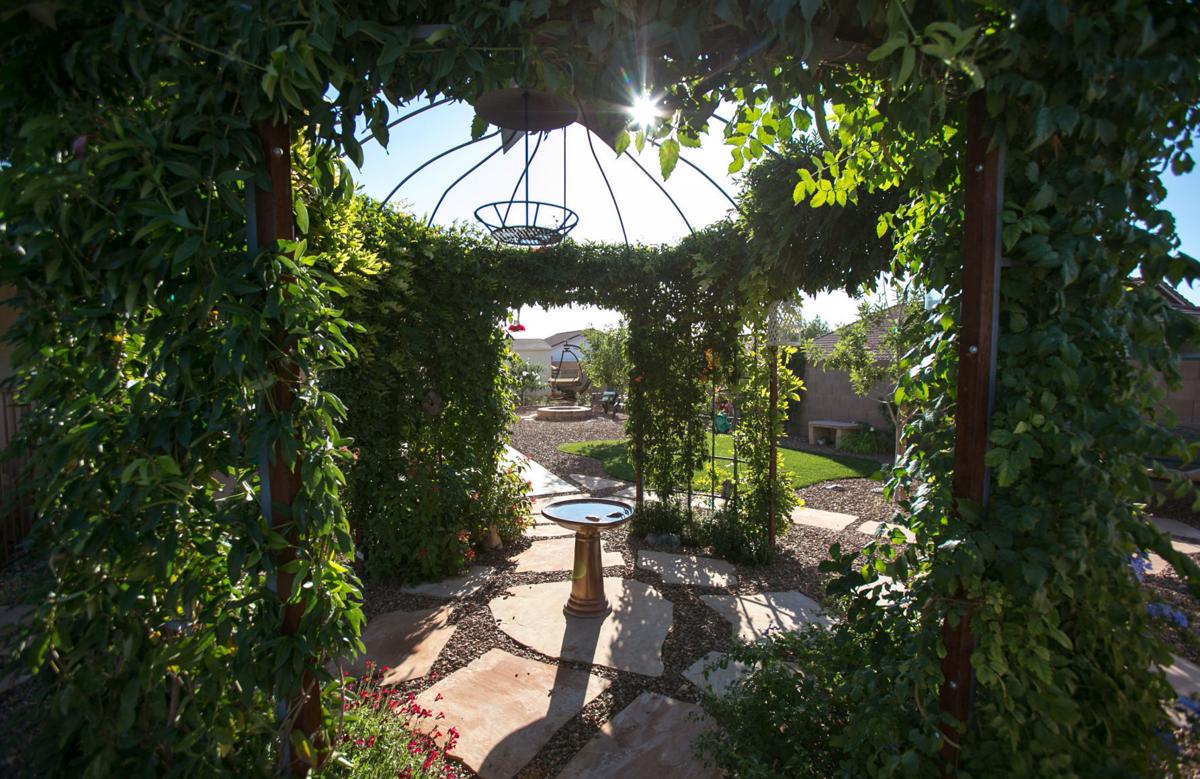 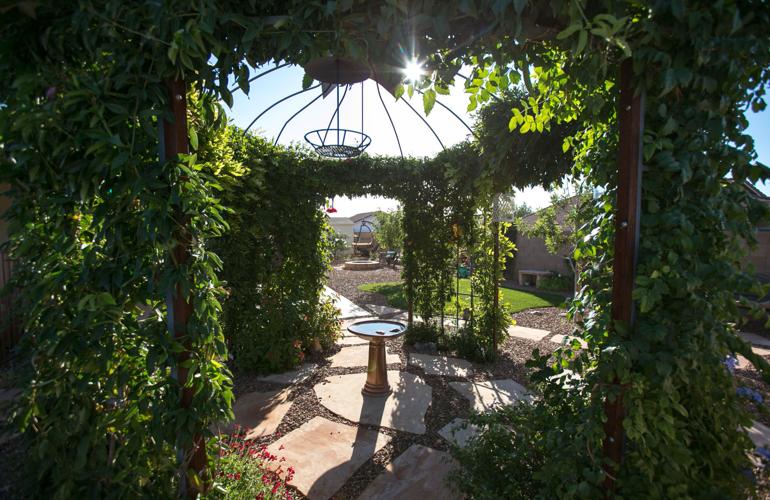 This gazebo is the focal point on the yard Lisa and Robert Lang created themselves at their home in Rita Ranch. The yard has some 40 species of bushes, vines, succulents and trees. 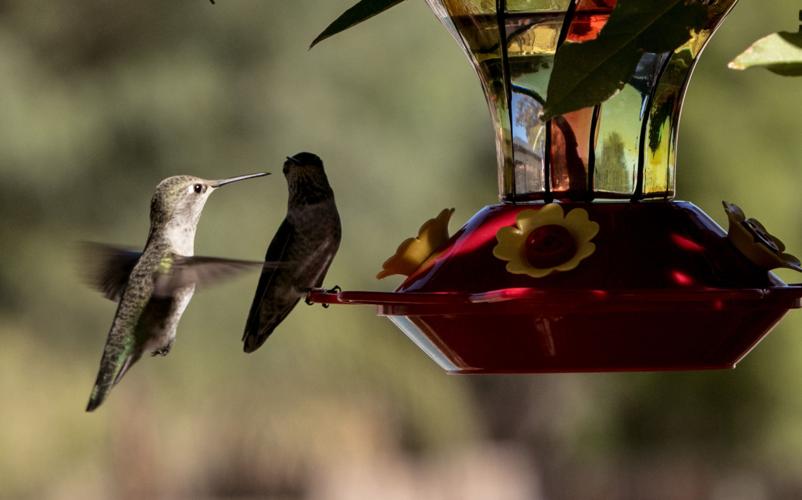 A hummingbird waits for its turn at a feeder at the Rita Ranch home of Lisa and Robert Lang. 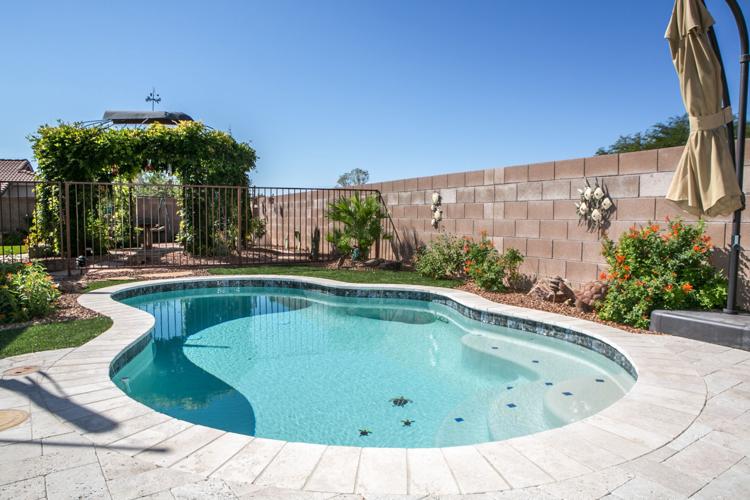 The Langs’ yard is proof that even a desert landscape can be lush. 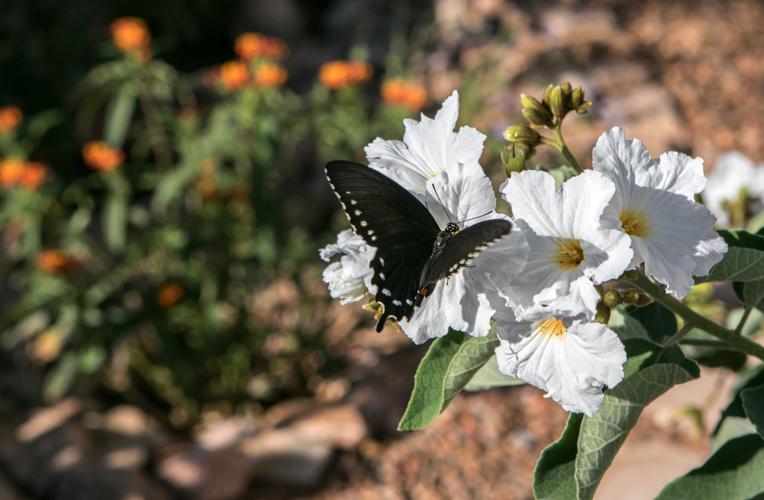 A butterfly enjoys a Texas olive tree in the butterfly garden of Lisa and Robert Lang. 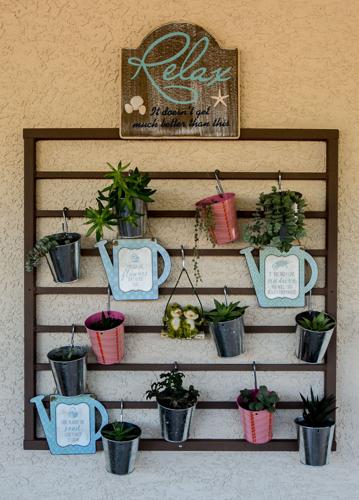 Potted plants serve as accents for a wall at the Lang home.

You can check out nearly three dozen gardens and landscapes at two garden tours on Saturday, Oct. 28.

Among the stops is a do-it-yourself backyard that embraces desert landscaping. Another shows how a homeowner solved a flooding problem and saved water.

Lisa Lang and her husband, Robert, have an 18-month-old landscape that surrounds their 20-year-old Rita Ranch home. But it’s already lush enough for the Fall Garden Tour by Rita Ranch, Community Gardens of Tucson and Civano Community Garden.

Lisa Lang grew up near a river in Wisconsin, where the homes had very green gardens.

When she moved to New Mexico 28 years ago and then to Tucson in 2000, she wanted her yards to look like those in her native state.

“I struggled in the Southwest on how I do that,” Lang admits. “I killed more plants trying to re-establish what I grew up with.”

When the couple moved into their current home three years ago, they knew they had to refocus their plant palette.

Lang, an information technology professional, read a lot of books, participated in social media forums and watched how the yards were affected by seasonal changes.

By spring of 2016, the couple were ready to get to work. They used a stick to sketch out their landscape design on the ground. They got a jackhammer to break through caliche. They shaped the landscape, installed a gazebo and flagstone patio and planted desert-adapted species.

Now they have a lush yard populated by some 40 species of bushes, vines, succulents and trees.

The gazebo is covered and surrounded by trumpet vine, bat face cuphea and a Hatch chile that apparently voluntarily sprouted from a seed in a ristra Lang bought in Albuquerque.

This time, instead of a struggling, scraggly yard, the Langs have a verdant landscape, especially with help from a rainy monsoon season. Lang says she’s pleased with the results of their efforts.

Paralegal Connie Carder wanted to stop rainwater from flooding her patio and threatening to come through the backyard door.

As it happened, her son was an intern with Watershed Management Group when Carder decided to do something about the structural flaw. He suggested she call the rain-harvesting cooperative for help.

What she ended up with was much more than a fix. She got a garden full of flowering plants and a landscape that uses less city water. Her home is one of the stops at Watershed Management Group’s Homescape Harvest Tour.

Carder admits she never thought about saving rainwater and reducing her landscape irrigation. After working with Watershed Management, which also provides design services, her perspective changed.

“I learned so much about rainwater going into the earth and raising the aquifer,” she says. “I’m so a proponent now.”

The flat land in both the front and backyards is now contoured with swales and berms to divert water away from the house. Instead, rain fills basins that irrigate desert-adapted plants. The front yard also diverts water runoff from the street into plant-filled basins between the sidewalk and street.

Rain runoff no longer collects on the patio. It flows into gutters, runs down pipes and drains into the gardens.

Carder left a few plants such as lantana, an ironwood tree and a Bermuda grass lawn, which she overseeds with winter rye.

Even with the grass, plus some new edible gardening beds, Carder says she saves money. Her water bill has gone down as much as 36 percent since the new landscape was installed in 2016.

Carder installed one other water-saving system, a graywater line from the washing machine to the yard. She was really reluctant to do it.

“I thought it was a hippie thing,” she says. She wasn’t convinced that eco-friendly detergent would get her clothes clean enough.

She’s now a believer and hopes to use water from that source to feed fruit trees.

Carder says she’s not interested in any more water-saving systems, but hopes her yard will convince tour visitors that a little bit of work can save a lot.

“You don’t have to be at the ultimate extreme to enjoy the benefits of harvesting water,” she says.

What: Self-guided tour of at least 12 community, school and residential gardens.

Where: East side, Rita Ranch and Vail.

Admission: $7, $3 for 12 years and younger. Tickets are available before tour day at gofundme.com/RitaGardens and on tour day at Ace Hardware, 7451 S. Houghton Road.

What: Self-guided tour of 22 eco-friendly systems that harvest water, electricity and food.

Admission: $15; $10 for bicyclists, riders in a carpool and public transportation riders, free for 14 years and younger. Advance tickets are available at watershedmg.org/HHT2017 or on tour day at Watershed Management Group, 1137 N. Dodge Blvd.

In the November Garden

• This is the last chance of the season to plant perennials such as penstemon, salvia, verbena, desert mallow and angelita daisy.

• Prepare for protecting plants from cold nights and seasonal freezes that generally first show up late in November.

• Move adenium and other cold-sensitive succulents to warmer areas for the winter.

Four Tucsonans share what they get out of being among fellow plant nerds.

Questions to ask yourself before adopting a pet

Questions to ask yourself before adopting a pet

Why walking backwards is amazing for your health

Why walking backwards is amazing for your health

This gazebo is the focal point on the yard Lisa and Robert Lang created themselves at their home in Rita Ranch. The yard has some 40 species of bushes, vines, succulents and trees.

A hummingbird waits for its turn at a feeder at the Rita Ranch home of Lisa and Robert Lang.

The Langs’ yard is proof that even a desert landscape can be lush.

A butterfly enjoys a Texas olive tree in the butterfly garden of Lisa and Robert Lang.

Potted plants serve as accents for a wall at the Lang home.