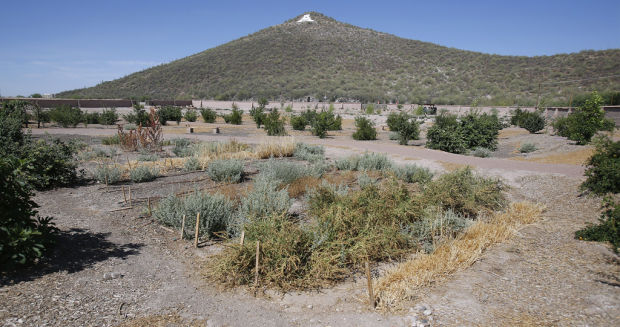 Tohono O'odham elders and volunteers set out plans for Mission Garden, a re-creation of the Spanish Colonial walled garden that was part of Tucson's historic Mission San Agustín. 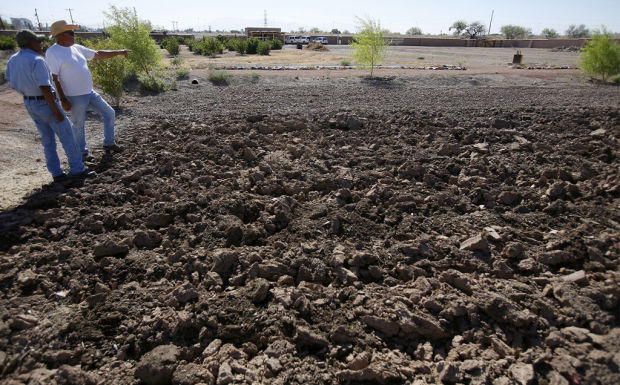 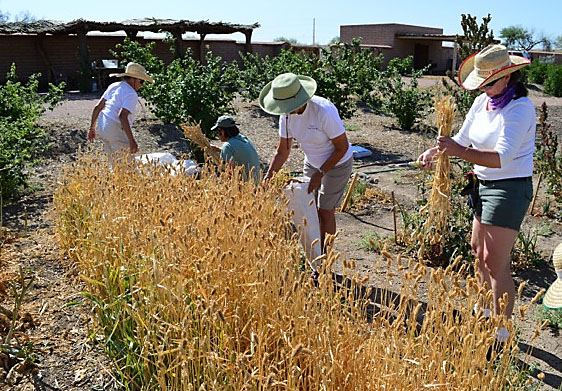 Volunteers harvest white Sonora wheat in the winter garden at Mission Garden at the base of "A" Mountain, on land that has been cultivated for about 4,100 years. 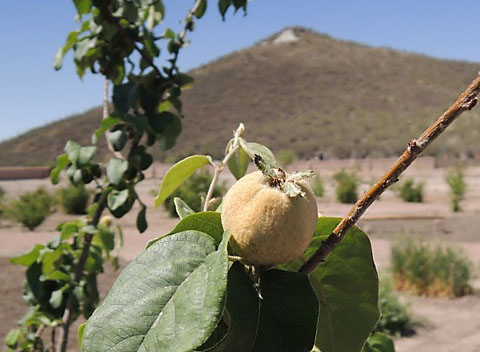 This quince is one of the Kino Heritage Fruit Trees planted last year at Mission Garden. "When you eat the fruit of these trees, you are literally tasting history," says Diana Hadley, a board member of Friends of Tucson's Birthplace.

At the foot of Sentinel Peak, visitors to Mission Garden split open a pomegranate and nibble the sweet jewels inside.

The rosy fruit is a symbol of years of planning, fundraising and backbreaking labor by a group of Tucsonans dedicated to honoring the more than 4,000-year history of habitation and cultivation at the base of the mountain.

Set in the historic Menlo Park neighborhood, the 4-acre Mission Garden is a re-creation of the Spanish Colonial walled garden that was part of Tucson's historic Mission San Agustín, known as Tucson's birthplace.

Rebuilt on its original site at Grande Avenue and Mission Lane west of downtown, the garden includes heirloom plants and will feature Timeline Gardens, interpreting more than four centuries of Tucson agriculture.

"Mission Garden is truly a celebration of the people who have lived here since the beginning of our history," said Raúl Ramirez, a founding board member of the Friends of Tucson's Birthplace, a nonprofit group of volunteers who made Mission Garden a reality.

"This belongs to all of us."

"This will be one of the first places in the country where you have a living, edible museum of agriculture that is authentic," Hadley said. "All of the trees planted in the garden had their origin in Europe and North Africa, and initially came to what is now Southern Arizona from Mexico during the 18th century."

The garden's pedigreed heritage trees and its three varieties of mission grape are descended from ancient trees found in Sonora, Baja California, California and Tucson's oldest backyards, she said.

"When you eat the fruit of these trees, you are literally tasting history," Hadley said.

Mission Garden, part of Tucson Origins Heritage Park, was a highlight of Rio Nuevo, approved by voters in 1999. Plans called to reconstruct the garden as well as the buildings that made up Mission San Agustín (see box below).

Architectural plans were complete and the historically accurate adobe garden wall was built so as not to disturb the rich array of artifacts.

But Rio Nuevo's funding came to a halt and the project dried up. The wall was a target for graffiti and the land stood barren.

Enter the Friends of Tucson's Birthplace.

Neighbors and others concerned about preserving history united to save the project. They worked with the city and Pima County - which owned the land that the majority of the garden sits on - to create a plan in 2011 for the Friends of Tucson's Birthplace to carry out the Mission Garden project.

Volunteers have worked with organizations including Native Seeds/SEARCH and the Tucson Cactus & Succulent Society to make the garden as authentic as possible. Collected were heirloom trees that are genetic descendants of those planted long ago.

The orchard was planted in early 2012, and today it is ripe with figs, pomegranates, apricots, quince, sour orange, sweet Mexican limes, pear, plums and grapes.

Volunteers are planting the Timeline Gardens, documenting through plants the cultures that harvested the land, thought to be the longest continually cultivated agricultural spot in the United States.

The garden will document the Early Ancestral period and continue with the Hohokam, O'odham, Spanish, Mexican, Chinese and Territorial Anglo-American periods.

The group plans to work with the Rio Nuevo board and the city and county to re-create the buildings that made up the mission - a two-story convento, chapel and granary - that have long since melted back into the earth.

In June, before the monsoon rains came, members of the group met with elders from the Tohono O'odham tribe, seeking advice on preparing the ground, planting and irrigating the crops.

Stories were shared from farming long ago. Clifford Pablo, a faculty member with Tohono O'odham Community College, drew irrigation plans. He and others offered ideas on keeping insects and predators at bay as well as strategies for fertilizing the plants and even the importance of singing to them.

"I am so proud of what we are doing here today, honoring the past and honoring our future," said Katya Peterson, Friends of Tucson's Birthplace board member.

"This garden has quite a story to tell," he told the tribal members. "For about 4,100 years the four acres have been cultivated at the base of 'A' Mountain, and we're going to continue it."

Bill O'Malley, project manager, said agave and other early plants - native mesquite and palo verde, white thorn acacia, jojoba, saguaro, ocotillo and cholla - will be included in the Timeline Gardens, as well as a roasting pit to show how agave was prepared.

Also grown will be native corn, beans and squash.

The garden, which will serve as an education center and tourism spot, is in need of volunteers and support. Tree stewardship is one way to support the garden. For a $1,000 donation, a tree is dedicated and maintained.

Regina Romero, vice mayor and a member of the Tucson City Council, said Mission Garden "is a beautiful way to pay tribute to Tucson's birthplace."

Peg Weber, an administrator with Tucson Parks and Recreation, has been involved in planning Tucson Origins Heritage Park since the start. She said the garden represents the determination of residents to move stalled projects forward.

"It's like having a waking dream of the past as you re-create these things," Weber said.

The history of Mission San Agustín and Mission Garden

Jesuit missionary Father Eusebio Francisco Kino established a visita - or a place for visiting missionaries - of Mission San Xavier del Bac at the site below Sentinel Peak in 1701. It became known as San Agustín de Tucson and was elevated from a visita to a mission when Jesuit missionary Bernard Mittendorf was stationed there for about six months in 1756.

The Jesuit order was expelled from New Spain in 1767, and after about a year of being vacant, Franciscans took over the mission sites at Bac and Tucson.

Between 1790 and 1810, Franciscans were responsible for most of the construction that took place at both sites. Tucson also became a presidio - with the adobe fort about a mile across the Santa Cruz River from the mission site - in 1775, and the presence of the presidial troops increased the Spanish and mestizo population.

A garden was created at San Agustín to sustain the missionaries - wheat for bread, grapes for wine, olives for oil. Cuttings from trees that originated in the old country were brought carefully wrapped in cotton cloth and planted.

After Mexico became independent from Spain in 1821, funding for the missions and the frontier presidio system decreased and both institutions in Tucson went into decline.

Descriptions of the Mission San Agustín site date from the Mexican period (1821-1854) and the American Territorial period, when the walls of the adobe buildings were literally melting and many of the fruit trees in the Mission Garden were drying up.

The Mission Garden is open to the public 8 a.m. to noon Saturdays at Grande Avenue and Mission Lane.

People can come to see what's growing or to lend a hand. "We always need more volunteers," said Bill O'Malley, the project manager.

To schedule a tour or for more information about Friends of Tucson's Birthplace and Mission Garden, go to www.tucsonsbirthplace.org or call 591-0478.

Tohono O'odham elders and volunteers set out plans for Mission Garden, a re-creation of the Spanish Colonial walled garden that was part of Tucson's historic Mission San Agustín.

Volunteers harvest white Sonora wheat in the winter garden at Mission Garden at the base of "A" Mountain, on land that has been cultivated for about 4,100 years.

This quince is one of the Kino Heritage Fruit Trees planted last year at Mission Garden. "When you eat the fruit of these trees, you are literally tasting history," says Diana Hadley, a board member of Friends of Tucson's Birthplace.