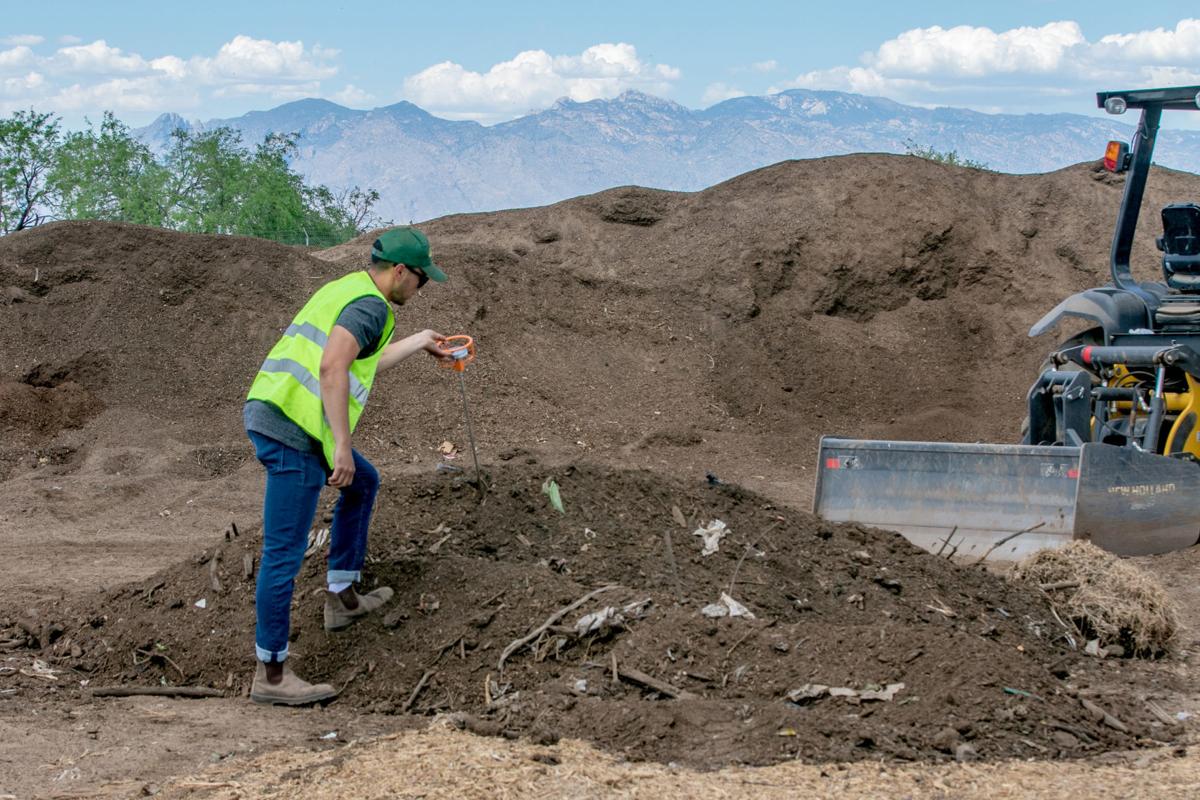 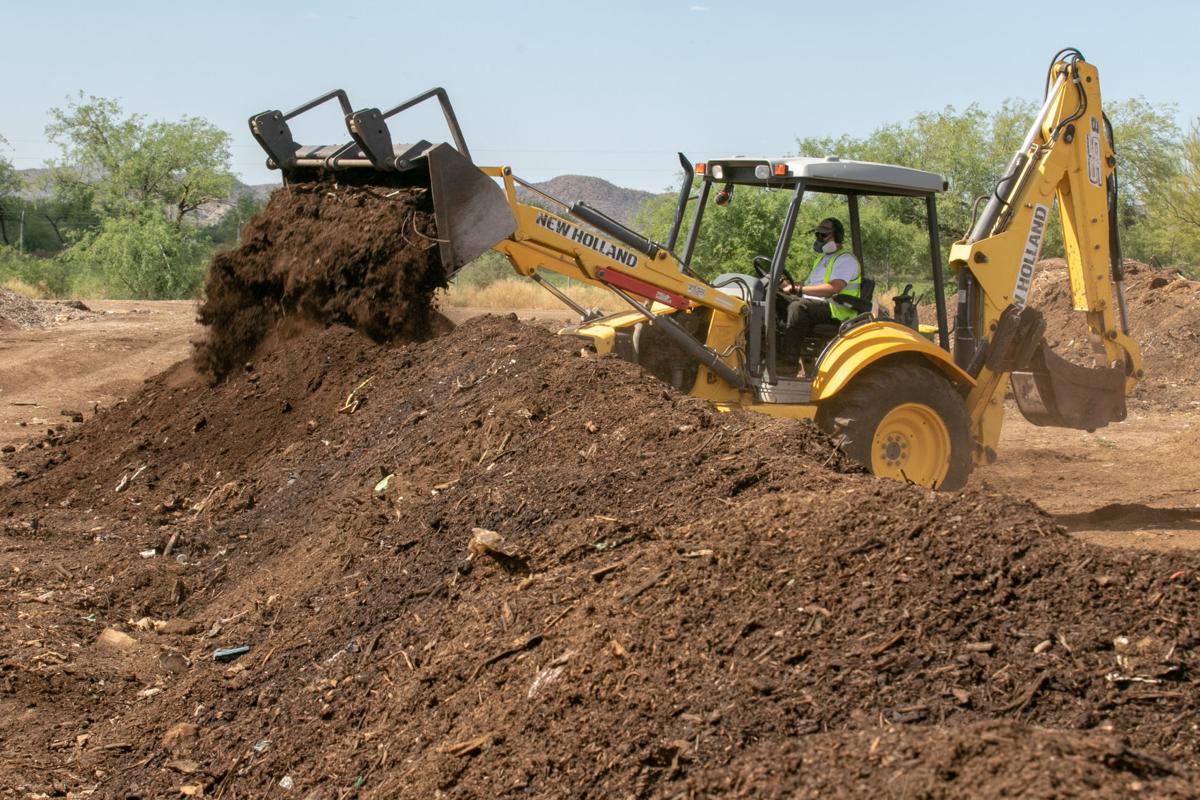 Tristan Stevens uses a loader to turn a row of material being composted at the Compost Cats site on April 26, 2019, in Tucson, AZ. Compost Cats are winding down operations at this site with the anticipation of relocating in the fall to Los Reales landfill. Reasons include outgrowing the facility and not having the right kind of equipment for increasing operations.

Compost Cats, a big composting operation run by University of Arizona students, will close its facility at the San Xavier Co-op Farm for bigger digs.

Its temporary closure that is anticipated to start in June or July is adding to the woes of Scraps on Scraps, a small company that picks up plant waste from homes and delivers it to Compost Cats.

In the meantime, there are two other efforts to increase the capacity to divert compostable materials from landfills.

Through the city of Tucson’s FoodCycle program, food scraps from participating restaurants, groceries and other businesses were picked up and delivered to Compost Cats. Material from residents and Scraps on Scraps also fed the operation.

The resulting compost was sold in bags or in bulk.

The UA program has outgrown its facility near Mission San Xavier del Bac. There isn’t any room to expand and it doesn’t have access to reliable water and electricity.

“What Compost Cats has been operating with for eight to nine years is quite inefficient,” Ledbetter says.

The operation stopped accepting material in March and plans to close once its remaining compost — about 1,000 cubic yards — is sold.

To preserve the partnership with the city, officials are working to move the operation to the Los Reales Landfill. Compost Cats hopes to resume in the fall.

There are several issues to resolve. Compost Cats needs to raise somewhere around $1 million to buy equipment that the city doesn’t have at the landfill to help run the operation.

The city has paid Compost Cats as part of the FoodCycle partnership — this fiscal year to the tune of $66,000.

Los Reales has some equipment like a water tank to get composting operations running, but the city is unlikely to pay for additional equipment it otherwise wouldn’t use.

Permits must be approved. And any final agreement will need to balance city operational needs with continued participation by students.

“We’re doing everything we can to support them,” says Carlos De La Torre, director of the city’s environmental and general services department. “We jointly spent a lot of time getting (FreeCycle) up and running and we don’t want to lose that momentum.”

Scraps on Scraps, meanwhile, is looking for a partner to take food and landscape waste that residents put in 5-gallon buckets and pay the company to pick up.

Earlier this year it had to shrink its service from 300 subscribers to 150. It found it financially could not provide services to far-flung parts of the metropolis.

It now focuses on service in central and midtown Tucson. Subscribers also can continue to drop off buckets at the company’s booth at the weekly Santa Cruz Farmers Market.

“We had a lot of issues with the sustainability of what we were doing,” says Shannon Sartin, who started the company with her sister, Moira, in 2013.

Sartin, who now lives in Washington, D.C., says plans are to slowly expand the company whenever it can “optimize a truck route.”

In an unrelated move, the city is investigating offering a subscription service for picking up waste to compost. De La Torre expects it will take six months to a year to report back to the city council.

Meanwhile, Tank’s Green Stuff, whose gardening products include locally generated compost, is hoping to get its Wilmot facility running by the end of the year. Once in full operation, the location at 11505 S. Wilmot Road will triple its current capacity to make compost.

The composting operation at 5300 W. Ina Road then will be closed, says Emily Rockey, Tank’s director of sales and marketing.

The award-winning landscape nearly disappears into the Tortolita Mountains with the use of colors, materials and vegetation that mimic the look of its environs.

How to garden over Tucson's summer with little ones.

Whether using an iPhone or a Canon digital camera, students captured Arizona’s beauty for the 2019 Adventures in Nature Student Photo Contest …

The effort allows donors to adopt a rare seed in exchange for a donation.

Tristan Stevens uses a loader to turn a row of material being composted at the Compost Cats site on April 26, 2019, in Tucson, AZ. Compost Cats are winding down operations at this site with the anticipation of relocating in the fall to Los Reales landfill. Reasons include outgrowing the facility and not having the right kind of equipment for increasing operations.