A modern landscape surrounding a 4,500-square-foot contemporary home might be expected to spectacularly stand out in the hills of Dove Mountain in Marana.

Instead, the property nearly disappears into the Tortolita Mountains with the use of colors, materials and vegetation that mimic the look of its environs.

The landscape design by Esthela Celaya of Celaya|Soloway Interiors LLC won first place for outdoor living space in the 2018 Design Excellence Awards. They were presented by the American Society of Interior Designers Arizona South chapter.

Kim Anderson and Andrew Bentley had a few requirements for what will become their part-time home – they’ll also spend time in Florence, Oregon — once Bentley retires from his career as an insurance broker in Bangkok.

“I knew I wanted outdoor areas in the front (of the house) to take advantage of the views,” says Anderson, a Minnesota native and a retired attorney who has many family members living in Arizona.

“I just wanted all sorts of different gathering spaces,” she adds.

Anderson also wanted a modern landscape design to match the minimal elements of the contemporary home, which Soloway Designs Inc. and Caos Construction LLC completed for the couple about a year ago. “I wanted to keep it really simple and very natural,” she says.

Celaya’s design carves up the front yard into intimate spaces tied together with steps along the hillside. The natural desert beyond provides expansive views down the hill and across the valley to the city.

Because the house and the landscape were designed and constructed at the same time, Celaya was able to incorporate plans that best take advantage of the views from every part of the front yard.

At the lowest level is a gas fire pit with ample seating from sofas that look out into the city.

The next level features a rectangular pool and round spa. Lounge chairs and side tables line the side of the pool that faces the view.

A few steps up is a gathering spot just off the pool with patio tables and more chairs.

A minimalist at heart, Anderson wanted to make sure the front yard wasn’t cluttered with furniture. She ended up adding more than she expected because there actually was enough room. Plus, “my family loves coming out here,” she says, and they all wanted to use the comfortable furniture.

The large porch is at this same level and just above the fire pit. The floor-to-ceiling sliding glass doors on the house open wide to seamlessly blend the outdoors and indoors.

The hardscape is in muted colors. “We wanted (the outdoors) to be part of the mountain,” Celaya says of the material and color choices.

The flooring is taupe porcelain tile and the wall veneer are in earth tones that change as the sunlight sweeps across it. Pavers are subtle blue and sand, and the furniture are in tones of gray and taupe.

For contrast, pillars are covered in roughly cut stone of russet, Sedona red and flecks of dark blue. It’s the same material that’s used in the pillars indoors.

Celaya worked with a landscaper to select plants that would be easy to maintain for part-time residents.

The color palette extends into the backyard, which has a feel of a protected slot canyon. The house creates one side, while the other side is a soaring wall of rock that was exposed when the hill was cut away for construction.

This is Bentley’s territory, says Anderson, where “one thing Andrew really wanted was a barbecue area.”

The outdoor kitchen is covered by the same dark stone used for the pillars. The setup has a pizza oven, seven-burner gas barbecue, sink and refrigerator.

A table for 12 provides a welcoming gathering place where, Anderson says, guests watch the night sky and wandering wild animals. It’s also well-protected from wind that often blows up the hill.

A garden bed along the rock wall is dotted with golden barrel, lady slipper and artichoke agave, among other plants.

A surprising pop of color is provided by the couples’ recent purchase — a small red and blue bull made from a metal barrel and other found objects.

Just off a guest room is a cafe table set nestled in a secluded corner.

There’s also plenty of natural vegetation that was left undisturbed.

Some of the saguaros and barrel cacti are lighted to draw the eye to the desert landscape.

“I realized,” Anderson says, “how much you live outside here.”

That’s more than a quarter of the 29 citations presented by the professional organization.

Along with her first-place award for the Dove Mountain outdoor space, she won first place for the home’s wine room as a singular residential specialty space. She also took the top honor for small kitchens.

In the March garden

From locally-grown foods to arts and crafts, Tucson farmers markets have something for everyone.

Tucson-area garden tours will focus on creative ways to use, capture water 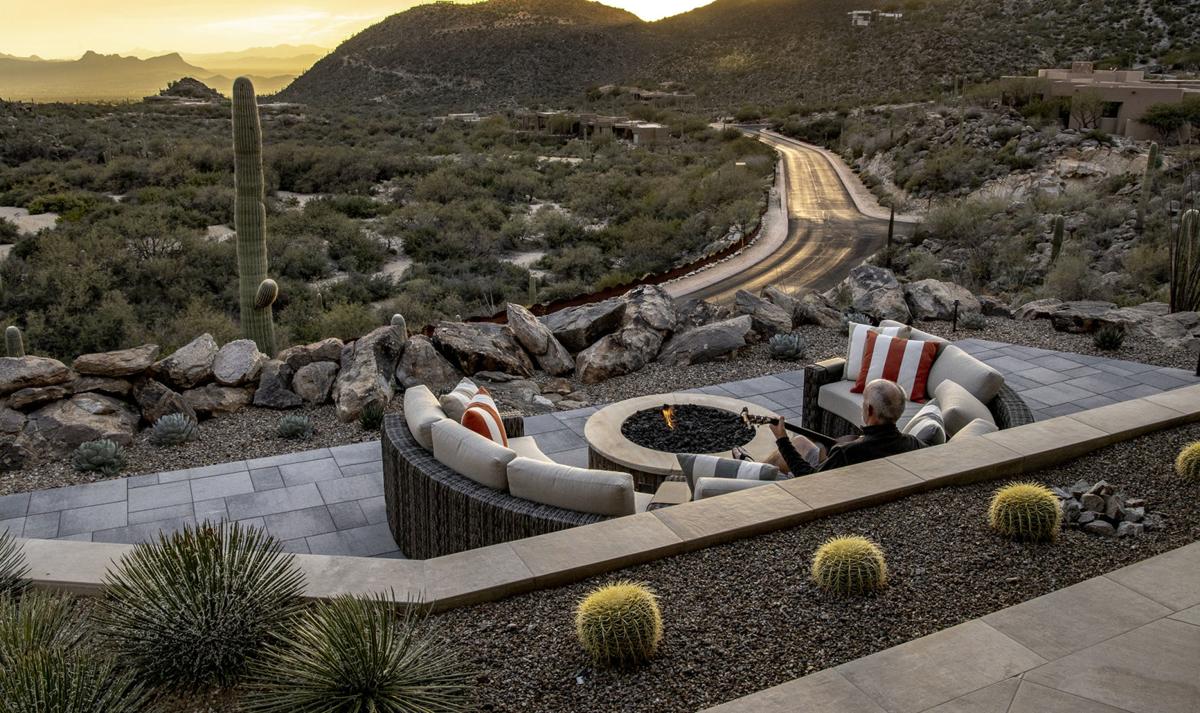 Esthela Celaya’s design divides the front yard into intimate spaces. On the lowest level is a fire pit and sofa semicircle. One level above on the larger porch, barrel cacti and agave grow in narrow planters with dark rock mulch. 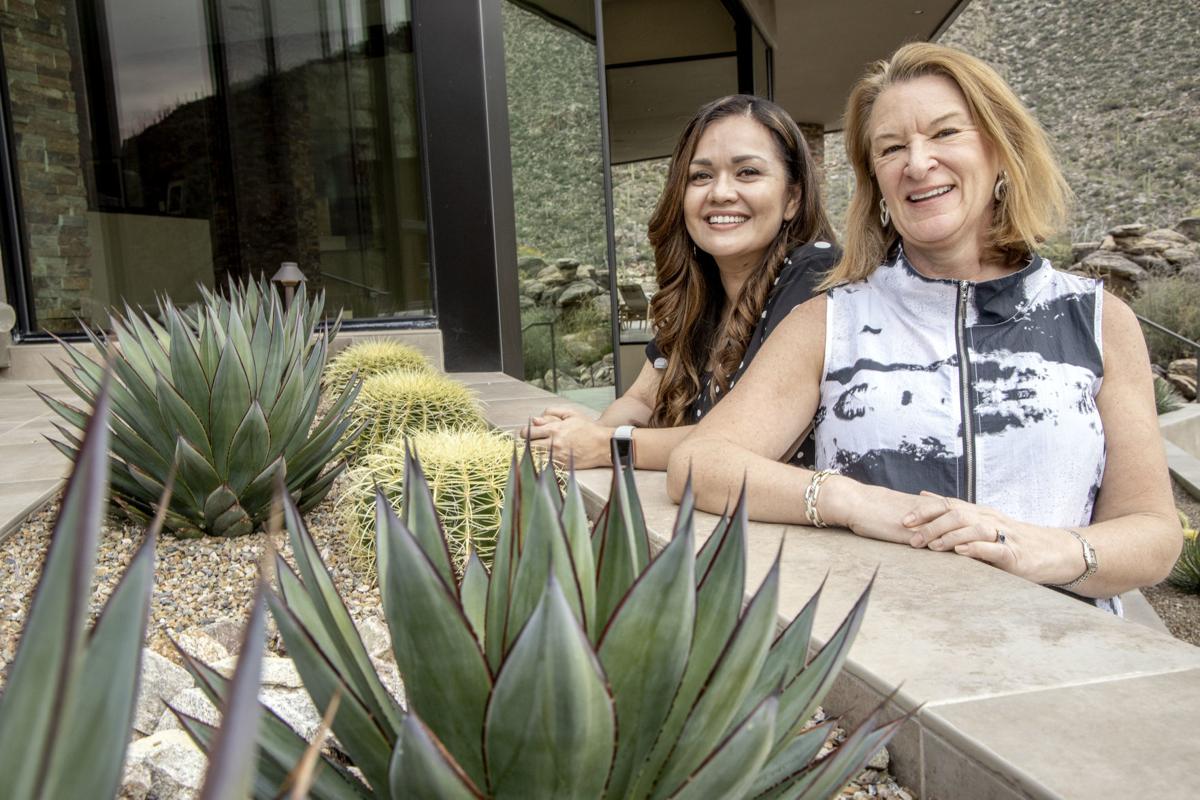 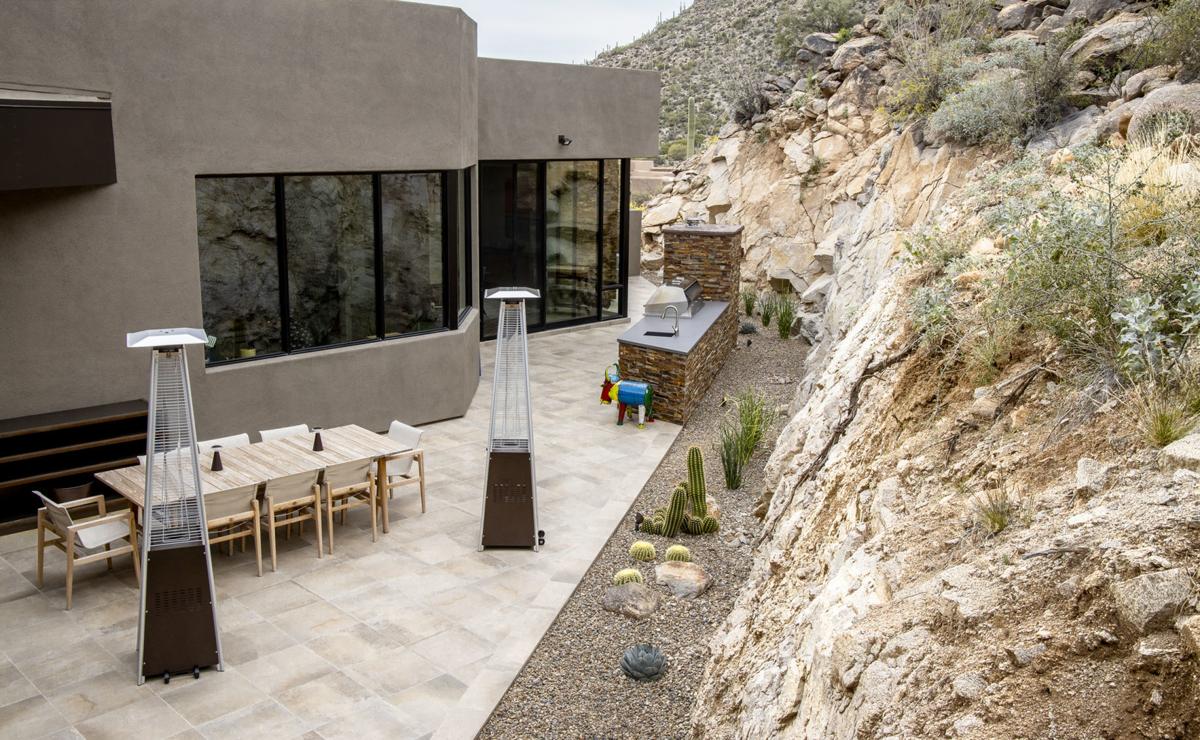 The small backyard at Kim Anderson’s Dove Mountain home has a slot canyon feel. The builder of the home carved the rock out of the mountain to fit the house on the lot. The exposed plant in the canyon wall add texture to a sparsely planted, easy maintenance yard. 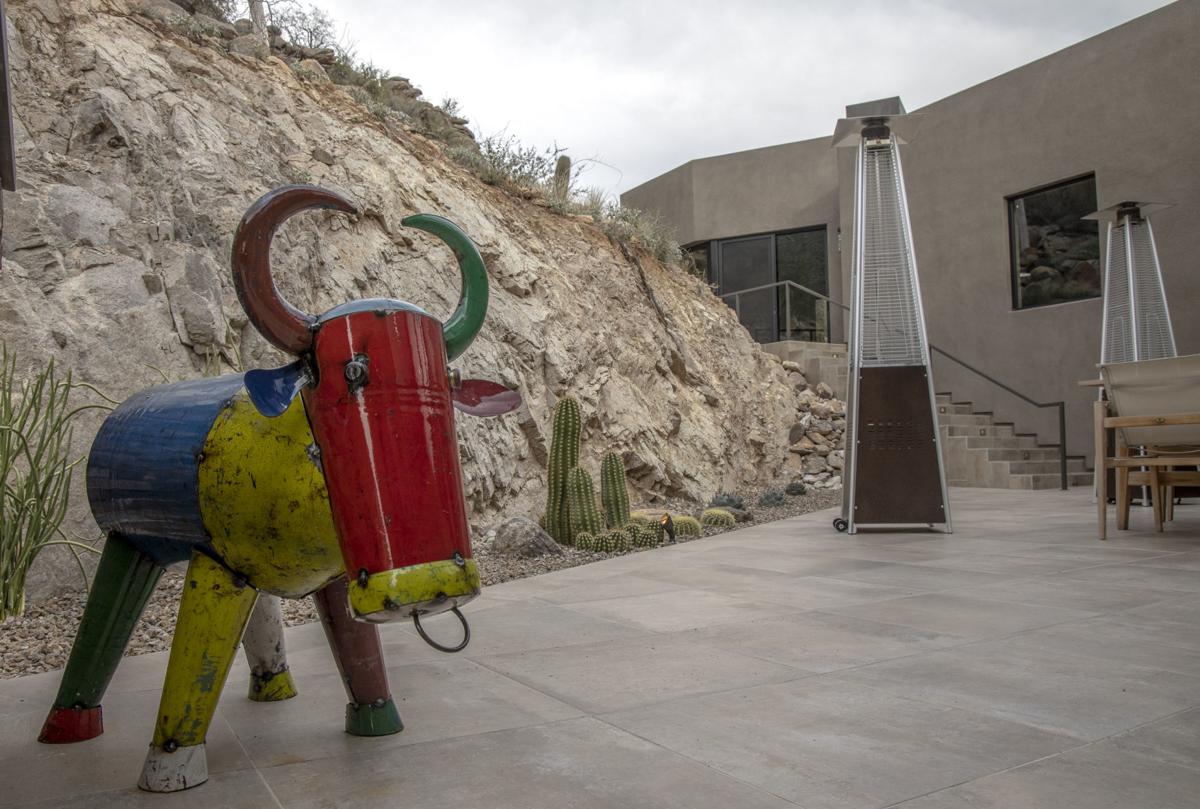 A colorful bull sculpture and stylish heaters add warmth to the back yard at Kim Anderson’s Dove Mountain home on Jan. 31, 2019, in Tucson, AZ. 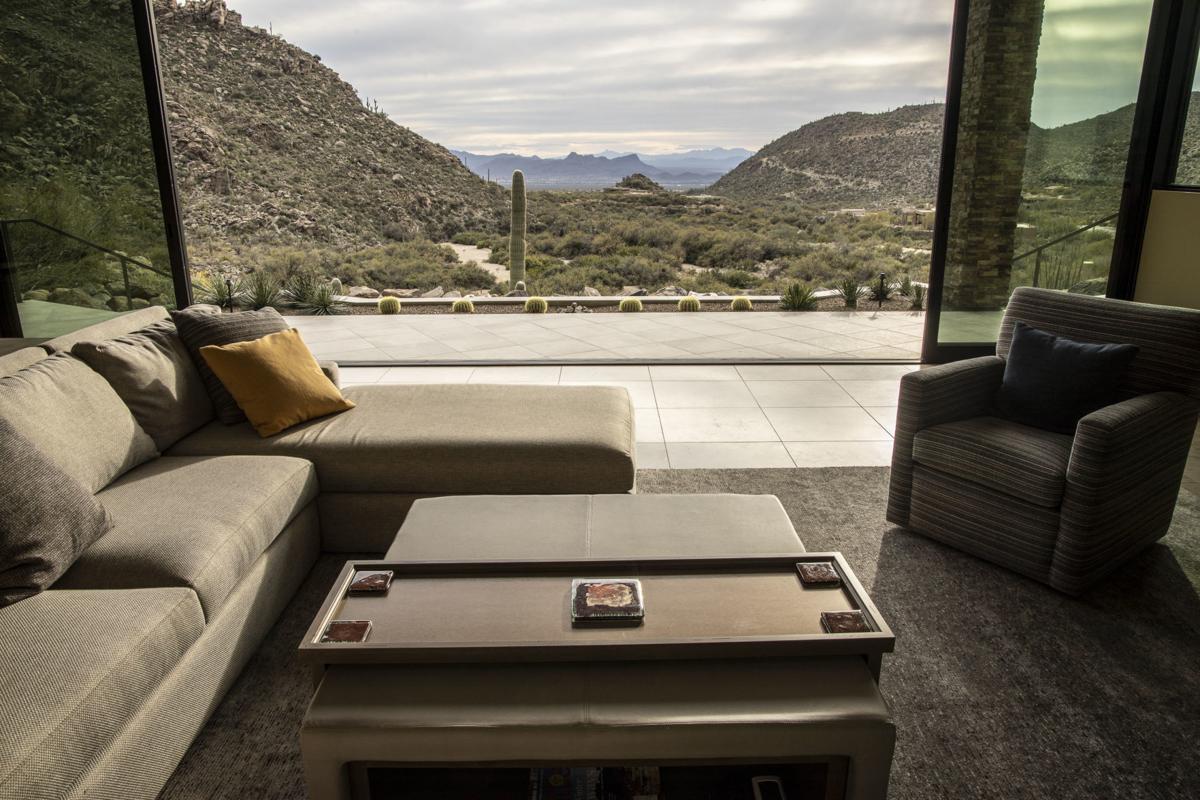 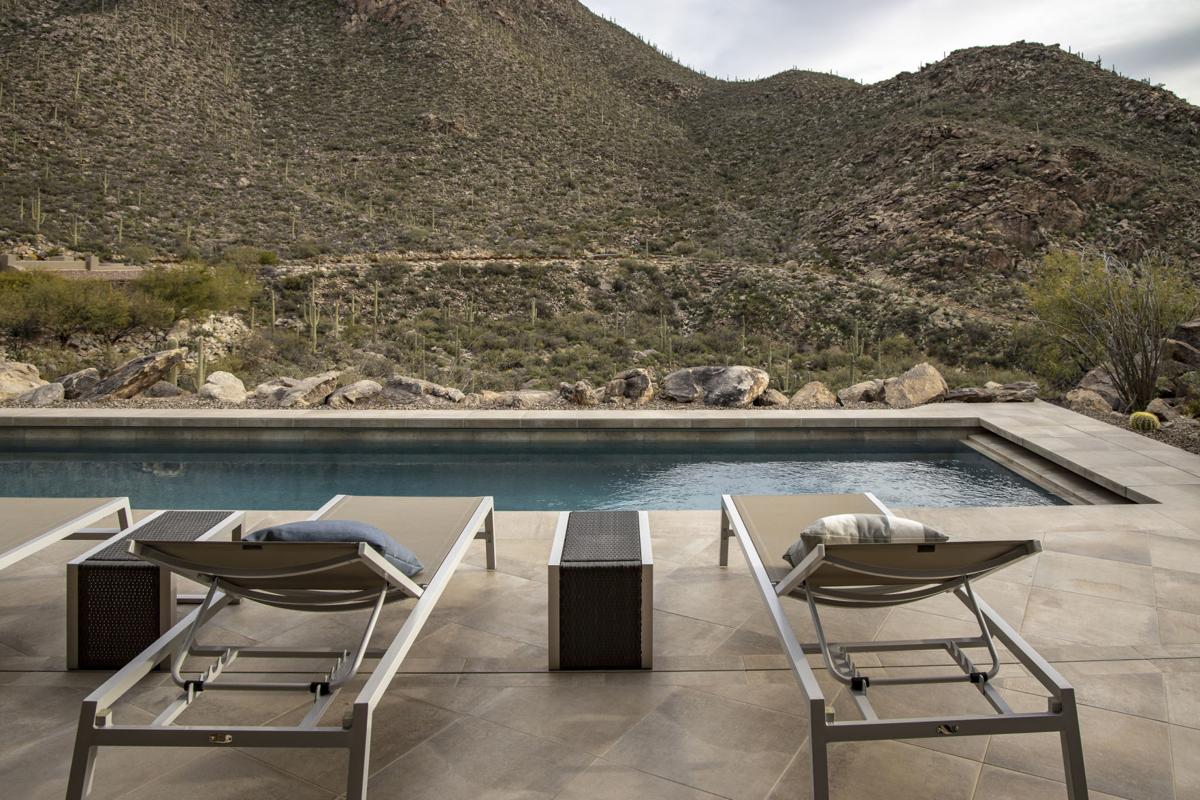