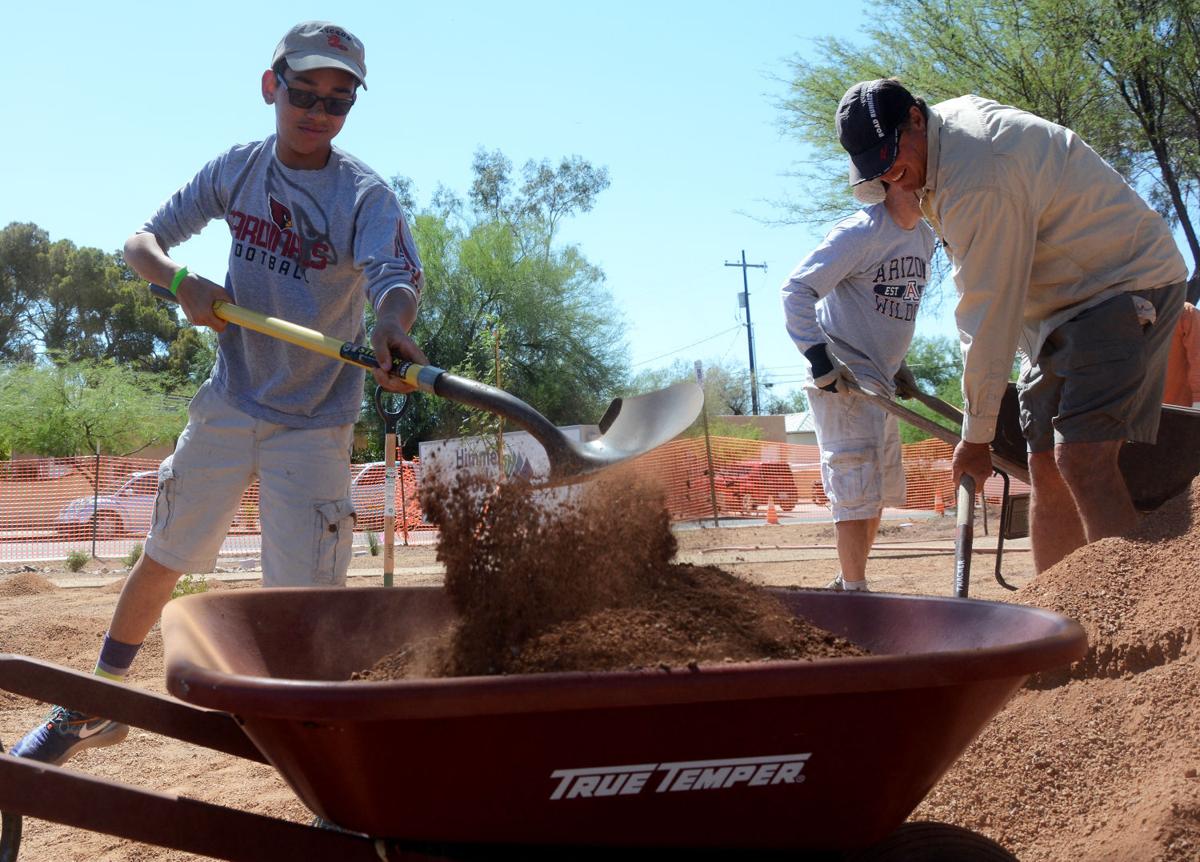 Jordan Walls shovels dirt into a wheelbarrow as part of the Himmel Park Beautification Project. The library’s new look was based on a xeriscape plan of native plants and trees. 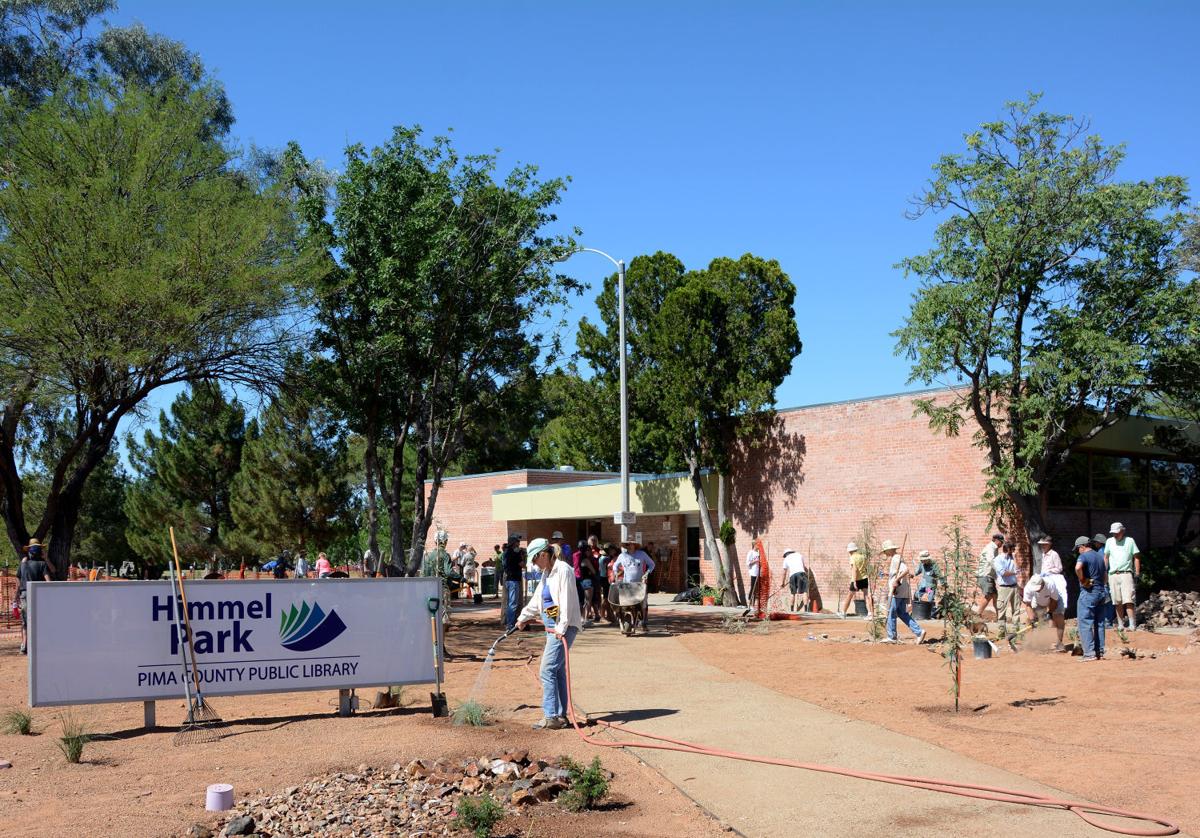 Volunteers work outside the Himmel Park Library as part of the Himmel Park Beautification Project. Several groups, including Northwest Landscaping and the Tucson Police Department, joined the efforts. 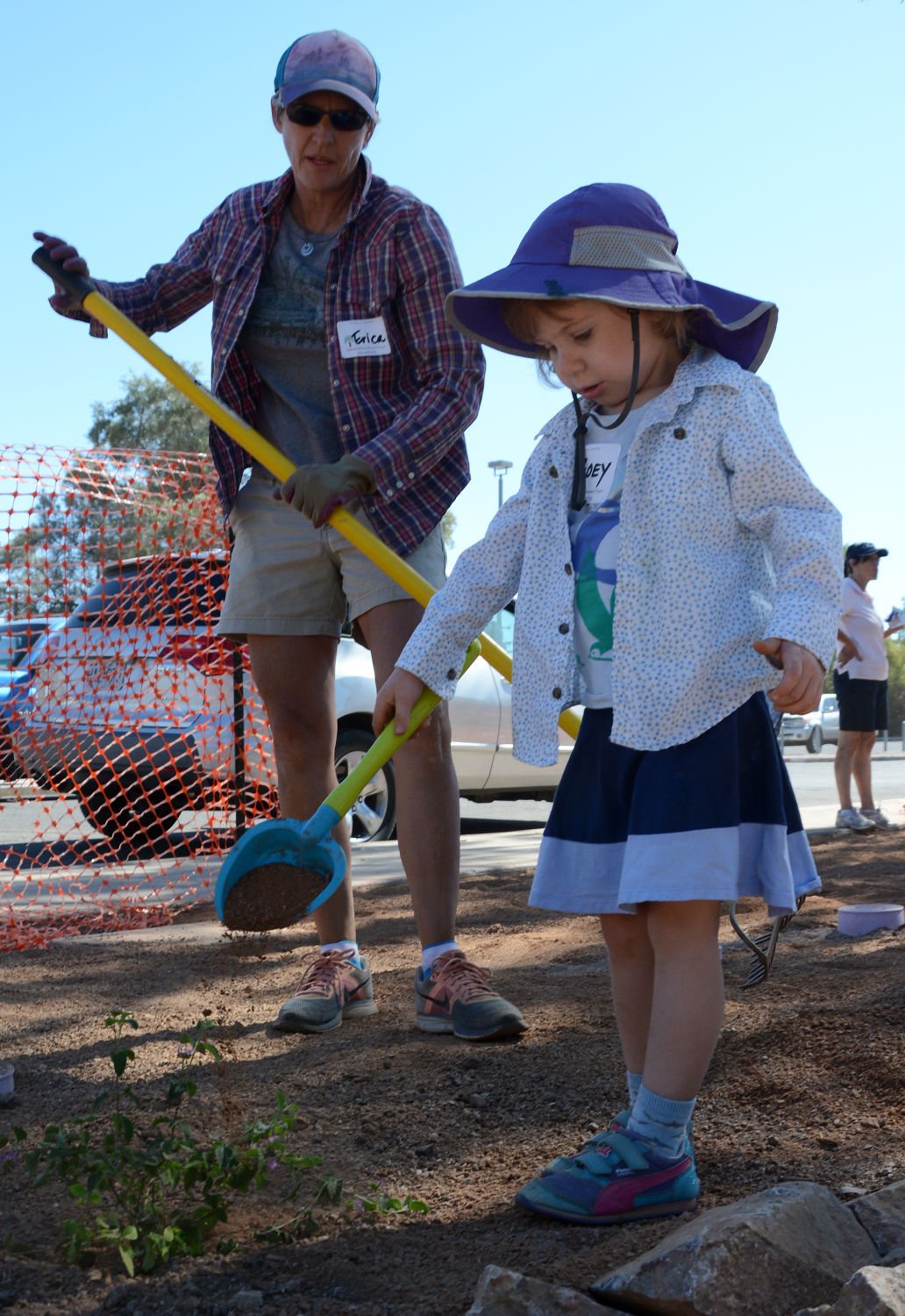 Zoey Fuchs, right, dumps dirt around a newly-planted bush outside the Himmel Park Library as part of the cleanup. 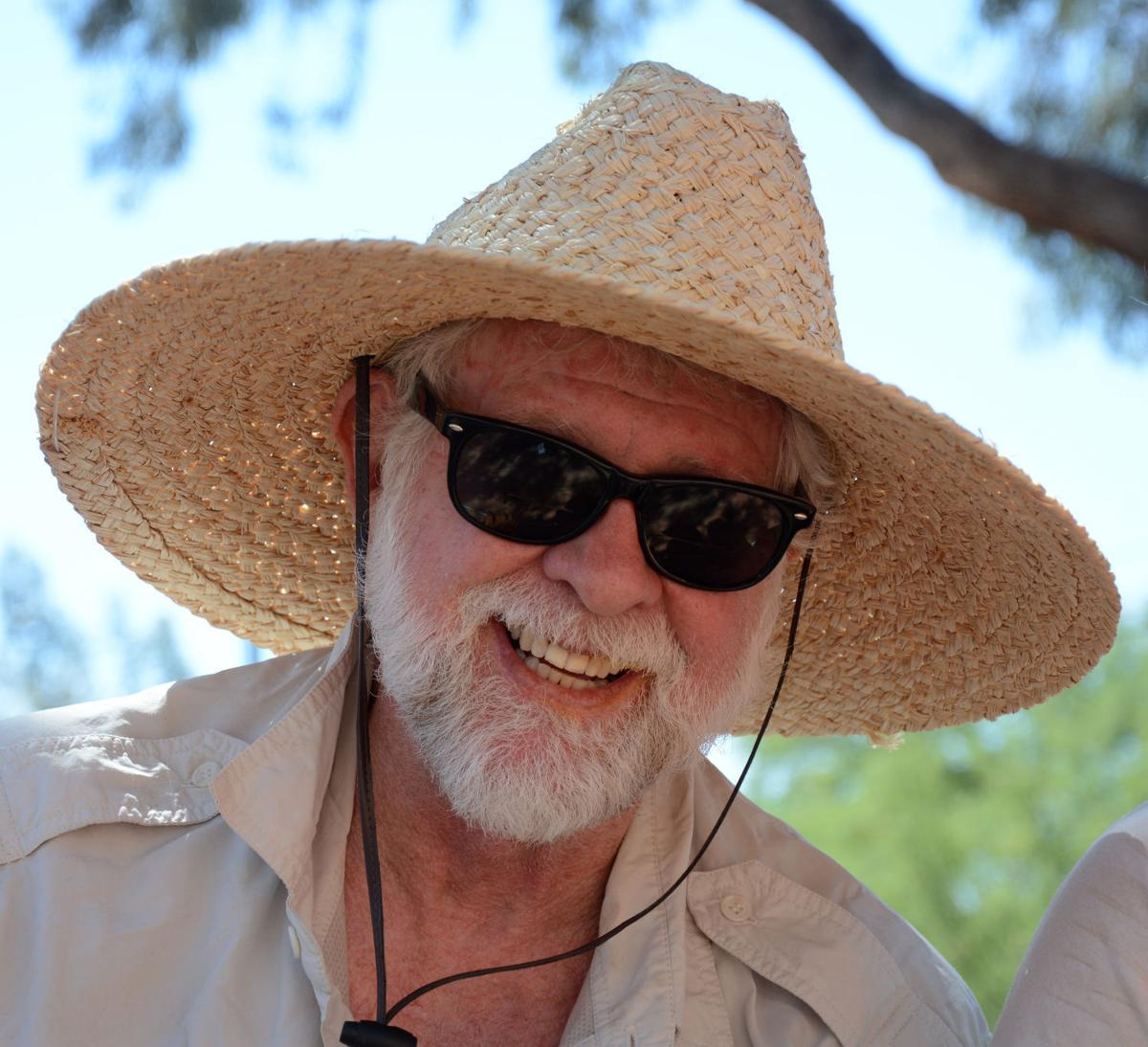 On a recent bright and shiny Saturday morning, William Craig knew exactly where he wanted to spend his time and some of his elbow grease.

The 30-year resident of the Sam Hughes neighborhood in midtown Tucson was among a small army of neighbors who converged that day on the Himmel Park Library, considered by many in the area as a centerpiece of the place where they live.

The event on May 21 was the culmination of a beautification effort organized by three neighbors − Denice Blake, Betty Guarraia and Susan Peters − who simply saw the library as a gathering place that they wanted to better reflect the name Himmel, which is German for “heaven.”

Craig was among about 60 residents who went to the library not to read books, but to dig holes, shovel dirt and move some rocks for their neighborhood, one of the more historic, prominent and active in the metro Tucson area.

Craig said the turnout shouldn’t have been a surprise for anyone familiar with the makeup of the square-mile neighborhood bordered by East Speedway on the north, Broadway on the south, Campbell Avenue on the west and Country Club Road on the east.

“It’s a continuation of what’s always been,” said Craig, a high school history teacher who retired from Pittsburgh to a home on East Third Street. “There’s always been a feeling of community in Sam Hughes. This is a big deal because Himmel Park is one of the two areas (along with Sam Hughes Elementary School) that we consider the center of the neighborhood.”

The beautification was an effort that began in 2013 when Blake, Guarraia and Peters started accumulating funds from the Sam Hughes Historic Home and Neighborhood Tour to work toward cleaning up the grounds of the library.

“Nothing was out here but dead grass, one bench and one bike rack,” Blake said. “You’d see people coming here before the library opened and just stand around because there was no place to sit.”

The library holds a special place in Blake’s heart, she said…now that she knows it’s there. She said that when she moved into the neighborhood 16 years ago, she didn’t even realize there was a library two blocks away.

“It was my lifetime dream that I didn’t even know was going to happen,” she said of moving within shouting distance of the library. “I get all my magazines here and my books. In the evening I can just walk up here.”

The library sits on Tucson Parks and Recreation land as part of Himmel Park. The name comes from the family of Alvina Himmel Edmonson who moved to Tucson from New Orleans with her husband Charles Edmonson in 1897.

According the Pima County Public Library website, Alvina sold the land from the family homestead to the city of Tucson in portions beginning in the mid-1930s. She sold the first block of land for $3,500, and ultimately sold the rest of the land that now makes up the 26-acre park at 1000 N. Tucson Blvd. The library is located at the northeast corner of the park, at the intersection of North Treat Avenue and East First Street.

The sale of the land had the condition that whatever the site was used for would carry the Himmel name, in honor of Alvina’s parents, Mr. and Mrs. Adolph Himmel.

The first phase of the park was finished in 1935. The pool was built a year later, and the city expanded the park in the mid-1940s by purchasing more land from Alvina. She passed away in 1948, still living in the home on East First Street that she occupied for 51 years. The library was built under the administration of Mayor Don Hummel in 1961.

Blake said the history surrounding the library, the park and the neighborhood made it almost imperative that the grounds of the library be a more welcoming and attractive place for neighbors and anyone who visits. Pima County estimates the library gets 18,000 visitors per month, one of the busiest libraries in the system.

The beautification project came together with the help of a number of local entities beginning with students from the University of Arizona College of Architecture, Planning and Landscape Architecture. Blake said a group of students submitted plans for the landscape design in a competition and those plans were presented to the neighborhood at the library.

“We didn’t choose any one plan. But we got ideas from all of them,” Blake said. “And then we hired a student to draw the architectural landscape plan that we’re still working off of today.”

Since the land is a city park, and the library is operated by Pima County, both governments had to be involved in the planning and execution of the project.

“We’re so grateful for this cooperative effort between the City of Tucson Parks & Recreation and the dedicated citizens who brought it to fruition,” said Holly Schaffer, community relations manager for the Pima County Public Library. “It’s helped transform the space outside the Himmel Park Library into something both welcoming and visually-appealing. It’s exciting to see it come to life after so many years.”

“We put in 130 plants and 12 trees,” Blake said. “We went small because things get big in a hurry and it kept the cost down.”

The lawn sprinkler system also was converted to a drip system.

Tile benches and artistic bicycle racks made and donated by neighborhood artists also were part of the project, Blake said, making the grounds a place where a library patron or someone just visiting the park can have a seat and enjoy a quiet moment outside the library.

“We wanted to make this a space where you could just sit out here and read,” Blake said, adding that the overall pride and reputation of the neighborhood − even beyond the Tucson community − also was an impetus for beautifying the highly visible library. As someone who has been involved in organizing the Sam Hughes home tour, Blake said she knows that visitors come from far away to visit the neighborhood.

“People come from California, New Mexico, really just to see the variety and the diversity of the houses here,” she said.

The added visibility of being in the dead center of town also means there are plenty of passers-by who get a glimpse of life in Sam Hughes even if they don’t live there.

“If you take a standard Tucson map and you put a pin right in the middle, that’s my house,” Blake said. “So everything is close. You can be downtown and be home in 12 minutes. There’s nothing you can’t have here. This neighborhood has 2,000 residences and businesses, and it’s one square mile.”

And now, the neighborhood has another enticing spot that can be a gathering point for a tight-knit neighborhood − or the community as a whole − that had otherwise been a symbol of tough financial times for governments.

“One of our big things is realizing that municipal governments don’t have the money to do this. They barely can maintain,” Blake said. “If private citizens don’t step up and do this, it’s not going to get done. You can complain all you want. We hope to use this as an inspiration to other people to step up.”

With our home & garden newsletter!

A two-car garage in Forty Niner Country Club doubles as a brewery.

WomenBuild empowers families to own their own homes

Widowed mom of five receives keys this week to home she helped build.

If you’re going to live in a house during restoration, be prepared for dust.

Homeowners can prepare to 'Age in Place'

Should you stay or should you go? Small tips can make a big difference.

Beginning writers can get free advice from published authors.

When Shelley DeVere looks out the north-facing window of her midtown home, she says she can get a peek of the Catalina Mountains in the distance.

Maintain your trees just like you change the oil on your car or go to the dentist.

As the neighborhood aged, the residents did as well.

In Tucson, rainy summer has been a bug lover's dream

Festival on Sunday, Sept. 18, is the place to be to learn more about insects.

Jordan Walls shovels dirt into a wheelbarrow as part of the Himmel Park Beautification Project. The library’s new look was based on a xeriscape plan of native plants and trees.

Volunteers work outside the Himmel Park Library as part of the Himmel Park Beautification Project. Several groups, including Northwest Landscaping and the Tucson Police Department, joined the efforts.

Zoey Fuchs, right, dumps dirt around a newly-planted bush outside the Himmel Park Library as part of the cleanup.