Want to leave a desert legacy? Grow a saguaro
Share this
1 of 3 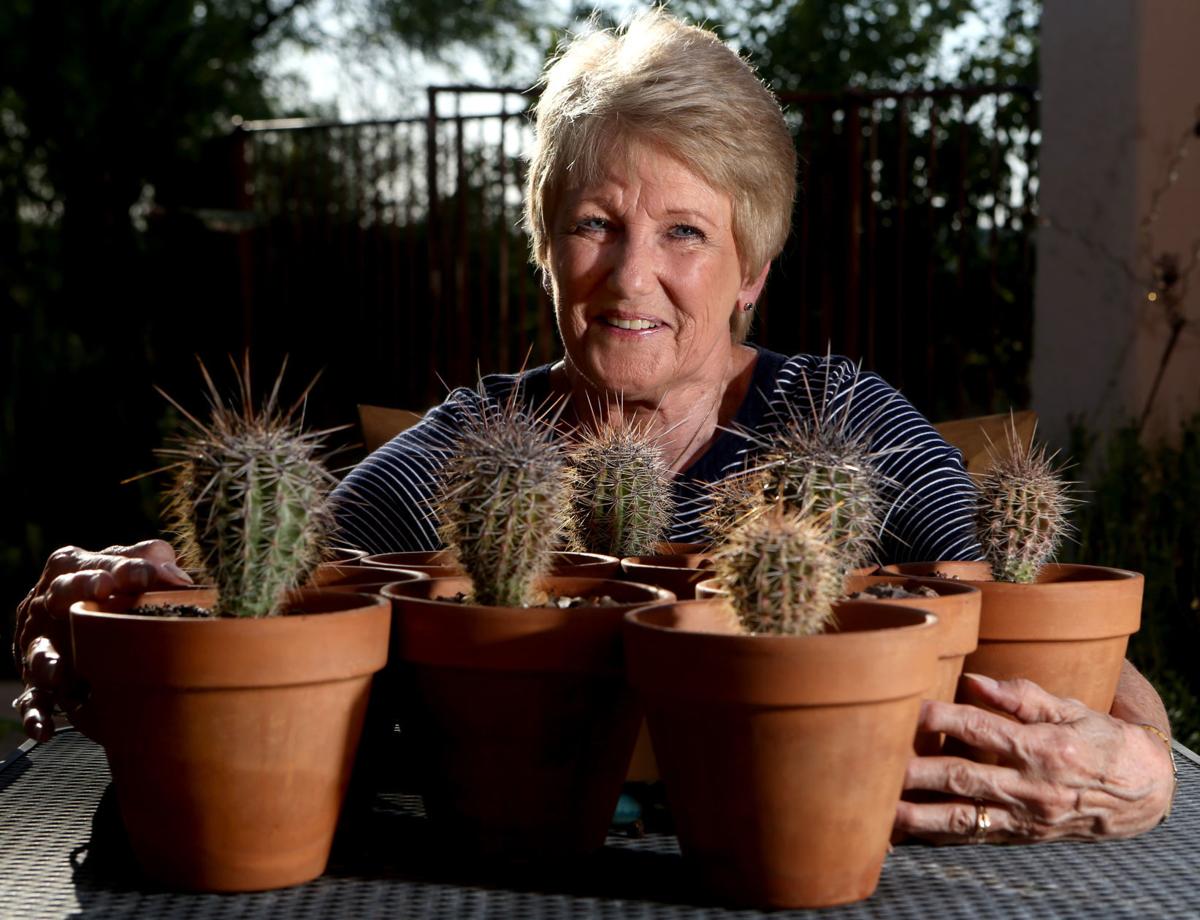 Nancy Freeman planted her cacti in 2008 and says “they’ve come a long way in the last four years.” 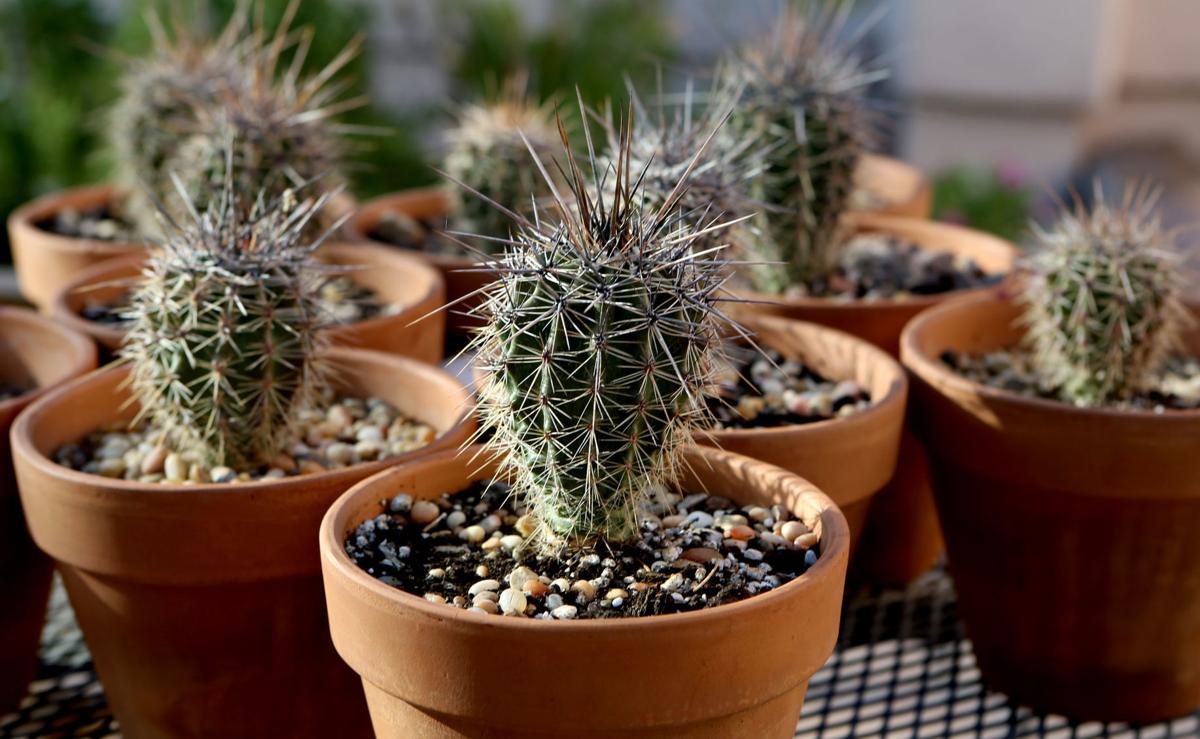 Nancy Freeman: “ My biggest mistake was that I would baby them too much.” They are now 10 years old. 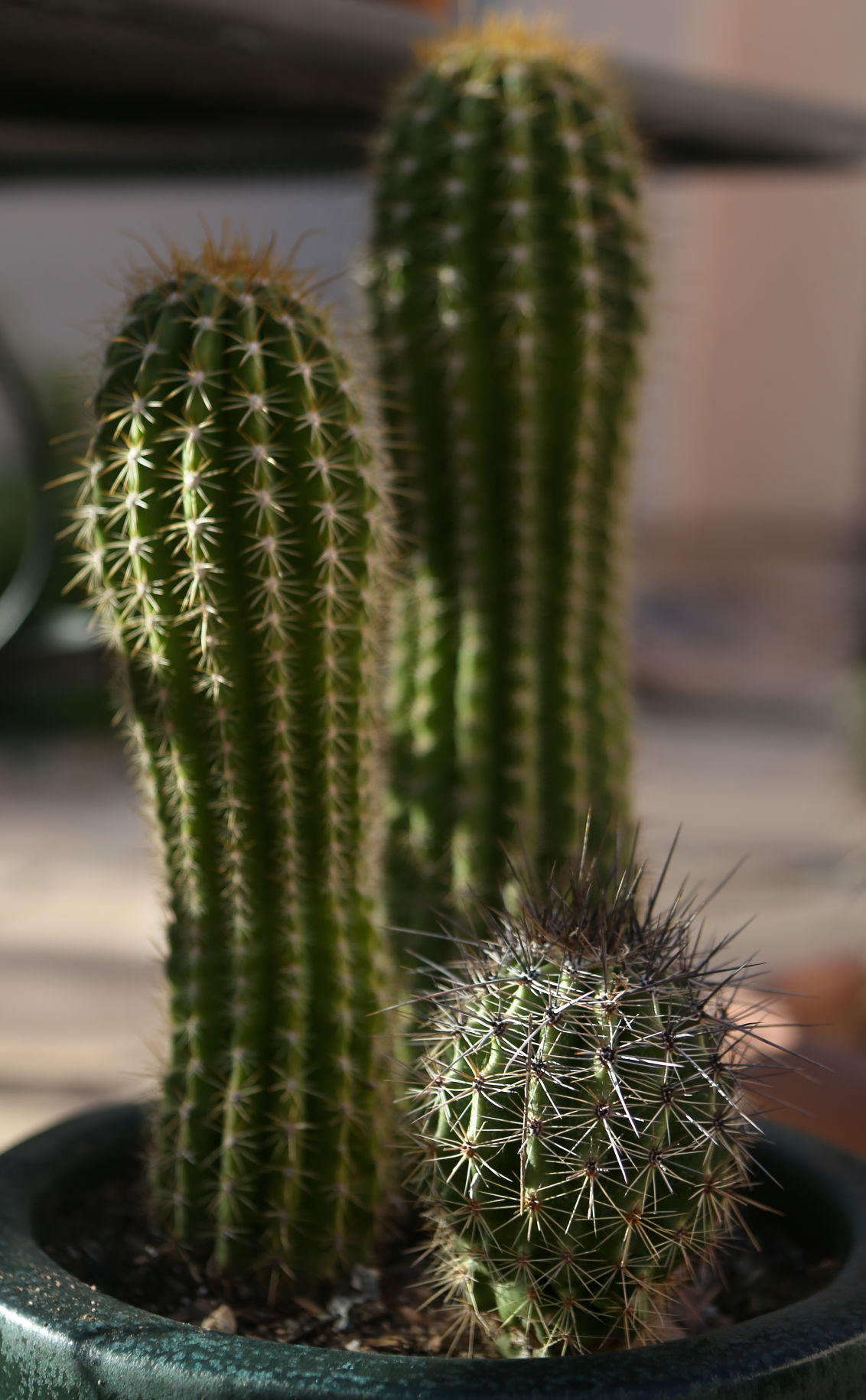 The one saguaro Nancy Freeman had to isolate from the other 10 10 year-old saguaros, lower right, that she raised from seeds, doing better than the others in a pot with two echinocereus cactus, Friday, June 29, 2018, Tucson, Ariz.

Nancy Freeman learned to be a brave gardener — by growing 11 saguaros .

Freeman, an accountant, made a bold move 10 years ago and took some of the thousands of seeds produced by the one-armed saguaro at her employer’s office.

“When I started working there, there was a single saguaro that had no arms,” recalls Freeman, who has worked for 30 years at an eye-care practice.

“I saw the fruit open,” she says of that 2008 day, “and realized there were black seeds inside.”

She took a couple of fruit to her northwest-side home, read up on how to make the seeds sprout and sowed a few in several 2-inch pots. In 16 days tiny two-leaf shoots emerged.

Then she took a series of wrong turns because she was afraid the young shoots would die.

“My biggest mistake was that I would baby them too much,” she says.

It started by wanting to protect the shoots from the elements.

She covered a window pane in her office with a white sheet of wrapping paper left over from a Godiva chocolates box. She set the seed cups into larger clay pots and put them on a nearby shelf.

She methodically used a syringe to water the pots every 10 days. In order to remember when to water, she wrote “10,” “20” and “30” on different sides of each pot. Once she watered on that date, she rotated the pot to the next number.

Lesson No. 1: Cacti need to have the same side face the same direction to protect all sides from sun and frost.

Four years later, she saw the plants, about three-quarters of an inch tall, weren’t nearly as big as she’d seen at nurseries and in pictures. She was told by a University of Arizona plant expert that they needed to be separated from each other.

Lesson No. 2: Seedlings will slow growth when crowded in pots.

“I was terrified to do this,” she says. She used tweezers to gingerly pull each plant out and give it its own 6-inch clay pot.

In 2014, Freeman had to bring the cacti home during an office move. It was the first time they would be outside. They lived in a rabbit cage on the shaded patio for two years to keep critters away. She brought them inside for the winter.

“They were not getting the sunlight that they needed,” she says.

Now the 11 surviving saguaros sit in pots on a table in a sunny patio. A red dot on the pot always faces north.

Freeman waters them every weekend during the heat and dryness of early summer, but cuts way back at other times of the year.

A scare over one diseased cactus has turned out to provide a good gauge on how her constant attention actually stunted the growth of the saguaros.

The UA plant expert warned her that one cactus with a black splotch probably was infected with a fungus. She was advised to throw it out before it infected the others.

“I’m like, ‘no,’” she says. “I stuck it in this pot” — she points to a 10-inch container that also holds an echinocereus–“and ignored it.” That saguaro now is a bit bigger than all the others, which range from about 4 to 6 inches high.

That’s smaller than what she sees in nurseries. But it’s much bigger than a wild specimen, which, after 10 years, may be shorter than 2 inches, according to information from the Arizona-Sonora Desert Museum.

Emboldened by her experience, Freeman has gone on to grow Peruvian apple cactus, oleander, Texas umbrella tree and golden barrel cacti from seed.

But her saguaros are most precious. At 71 years old, Freeman expects that she won’t see them flower. That could take another 40 years. Friends who have followed Freeman’s saguaro adventure will inherit them. It says so in her will.

And after 10 years, she’s realized that they will survive even with her nurturing missteps. Says Freeman: “They really are pretty strong little guys.”

State law says you generally don’t need a permit to collect seeds from wild saguaros on state or public land. That’s according to Jack Peterson, associate director of the environmental services division at the Arizona Department of Agriculture.

You need permission from owners of private land to harvest saguaro seed there, Peterson says.

Dan Bach, owner of Bach’s Greenhouse Cactus Nursery, and Greg Starr of Starr Nursery offers tips for getting a saguaro started from seed.

• If you have a saguaro fruit, scoop the seeds and attached flesh out of the pod and drop them into water. The seeds will sink as they separate from the flesh.

• Dry the shiny black seeds on paper towels. They can be stored at room temperature for 20 years, Bach says.

• When daytime temps are between 70 and 80 degrees and the nights are warm, fill a 2- to 4-inch pot with moist cactus mix that drains well, Starr says. He likes a mixture of peat moss, perlite and sand.

• Sprinkle a few seeds over the top of the soil and water with a mister or by setting the pot in a saucer of water.

* Germination should happen in a few days. “If you’ve got seeds sitting in pots for two weeks and haven’t seen them, you might want to do something differently,” Bach says.

• When the plants get to be about the size of a pencil eraser, transplant into a bigger pot.

• Baby cactus should stay in pots for two[two] or three[three] years to protect them from critters. They then can be planted into the ground.

In the August Garden

• A plant that is suddenly dying with seemingly no reason may be the victim of grubs. You can treat the problem with insecticides.

• Rain-fed weeds can be eliminated with a weed killer. If you pull them by hand, be sure to remove the roots.

What Americans like to eat on a first date

What Americans like to eat on a first date

Ways to save money on pet care

Ways to save money on pet care

These are the most popular condiments around the world

These are the most popular condiments around the world

When an Oklahoma woman began researching her family tree, she had no idea her quest for information would lead her and her two sisters to Tucs…

Consider placement, usage before determining which kind of grass is right for you.

On this year's Bisbee tour, 11 gardens that feed the soul

This year’s slate of stops at the Sept. 1 garden tour by the Bisbee Bloomers illustrates how to make yards a joy to sit in, linger and relax.

What Robert Keith “Bob” De Armond couldn’t do as a career, he’s taken on as a hobby: Using his artist sensibilities to create a garden.

Now's the time to collect seeds from your summer garden

As the season winds down, you’ll have fewer chances to save seed.

Nancy Freeman planted her cacti in 2008 and says “they’ve come a long way in the last four years.”

Nancy Freeman: “ My biggest mistake was that I would baby them too much.” They are now 10 years old.

The one saguaro Nancy Freeman had to isolate from the other 10 10 year-old saguaros, lower right, that she raised from seeds, doing better than the others in a pot with two echinocereus cactus, Friday, June 29, 2018, Tucson, Ariz.