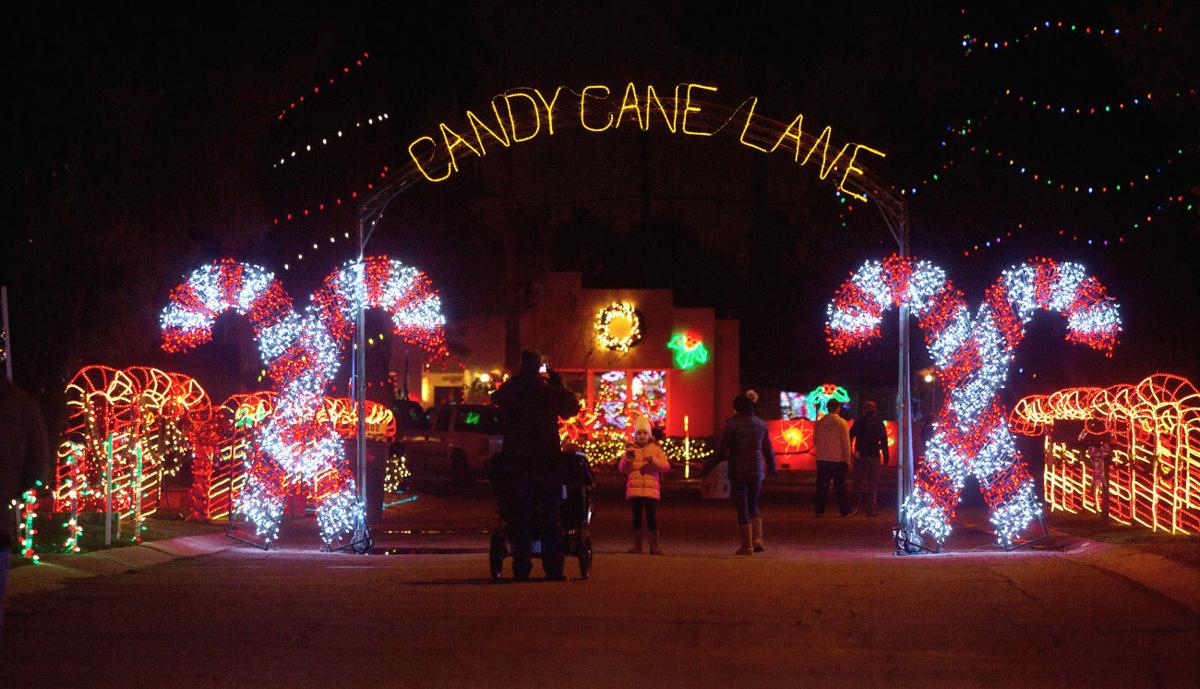 A family pauses for a photo at the Candy Cane Lane sign on Farr Street toward — where else? — Treat Circle. (Treat and candy canes seem to go together.) 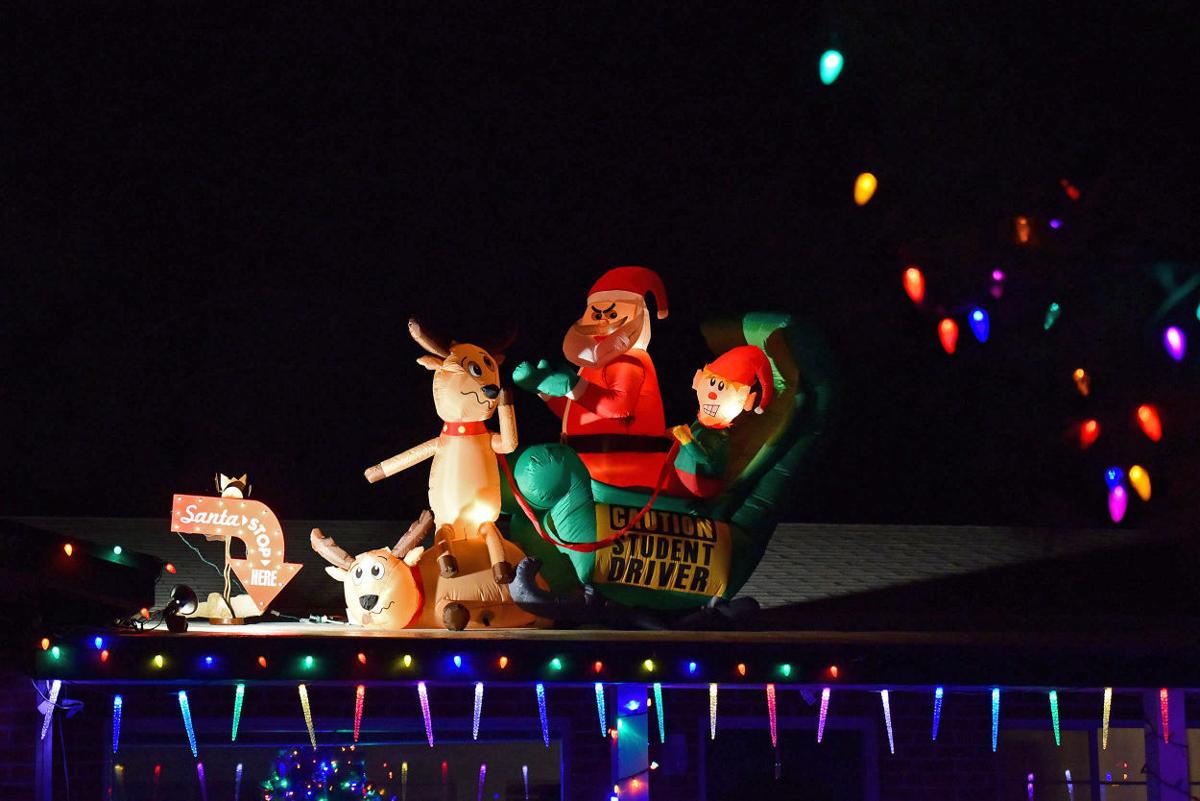 We’re guessing you recognize the inflatable characters on this roof on McKenzie Street. 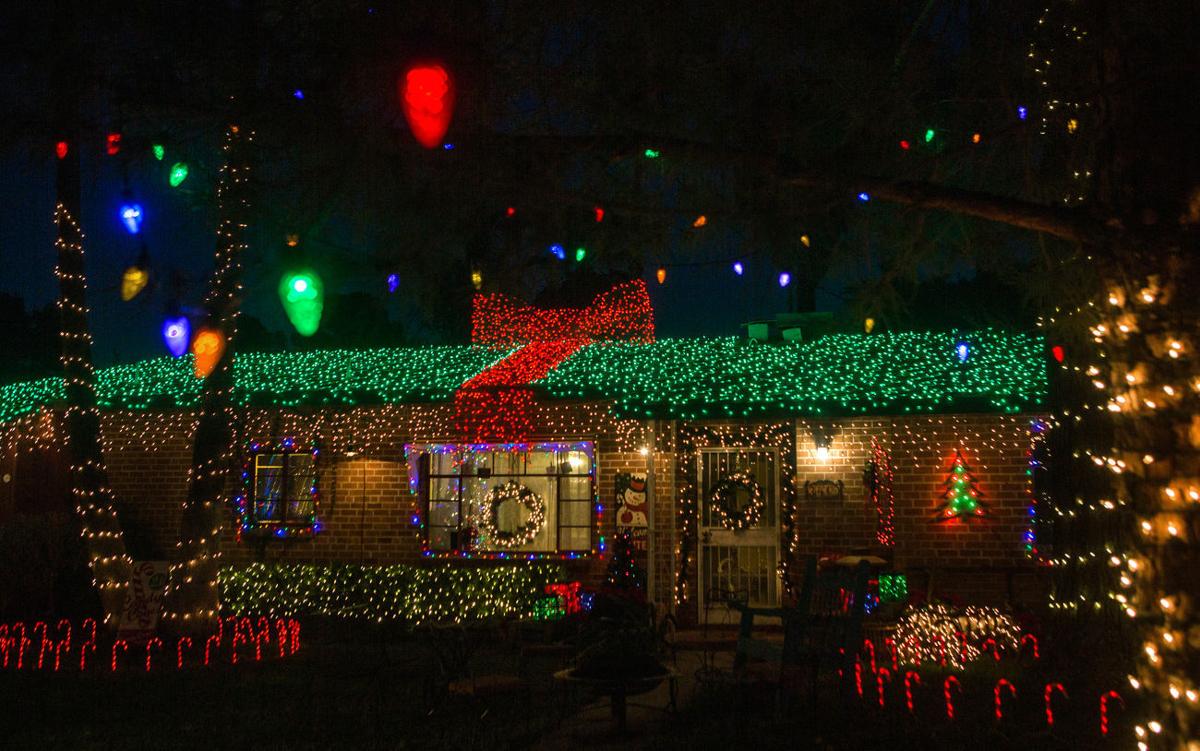 A bow of lights tops off this sparkling house covered with lights, lights and more lights at the Winterhaven Festival of Lights. 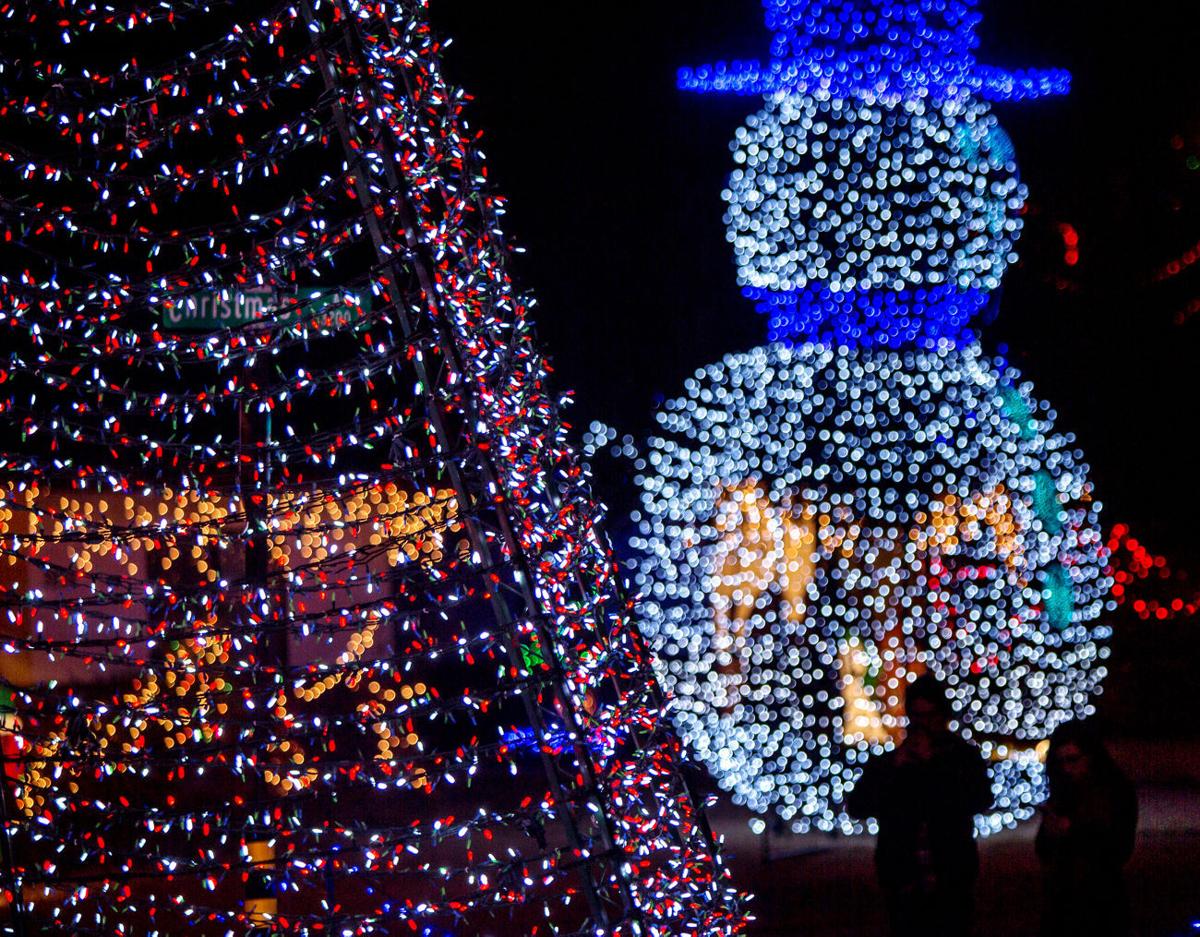 Thousands of lights and a ton of holiday characters greet visitors to Winterhaven. 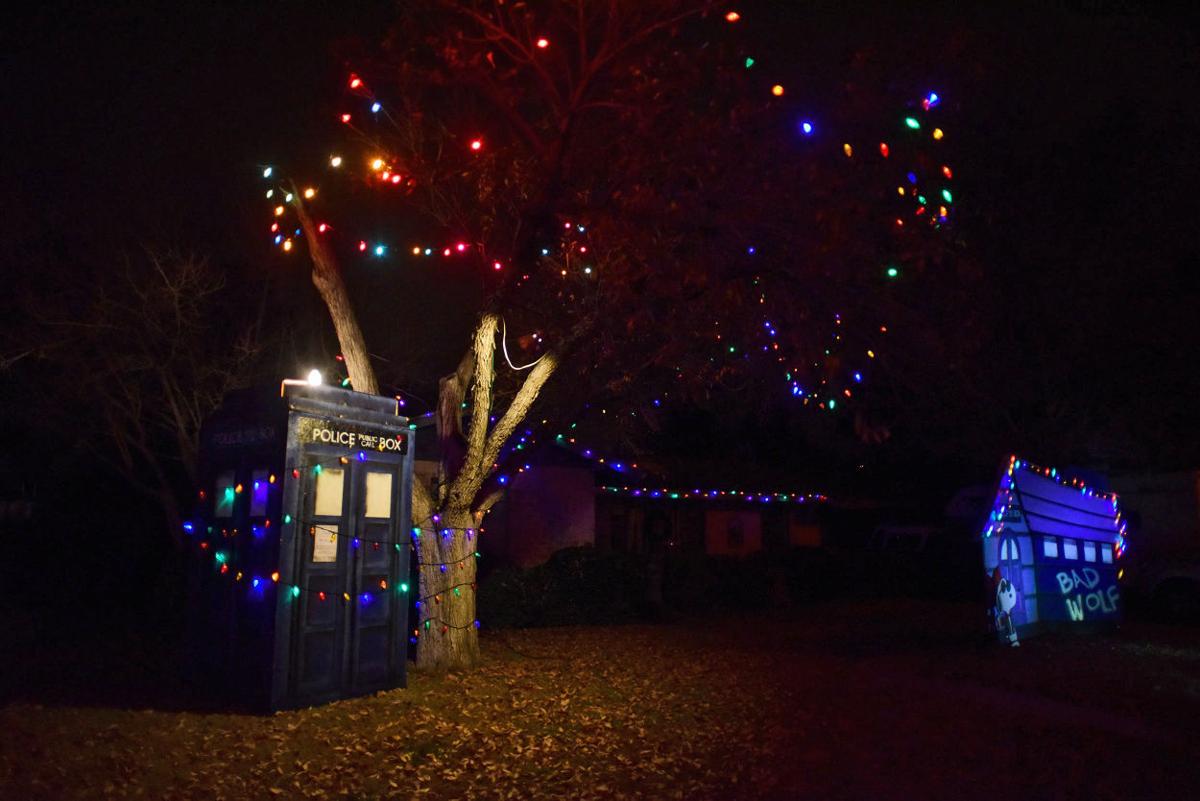 A “Doctor Who” T.A.R.D.I.S. and Snoopy’s dog house with “Bad Wolf” written on it on the corner of Richards Row and Bentley Avenue during the opening night of the Winterhaven Festival of Lights on Saturday, Dec. 12, 2015. 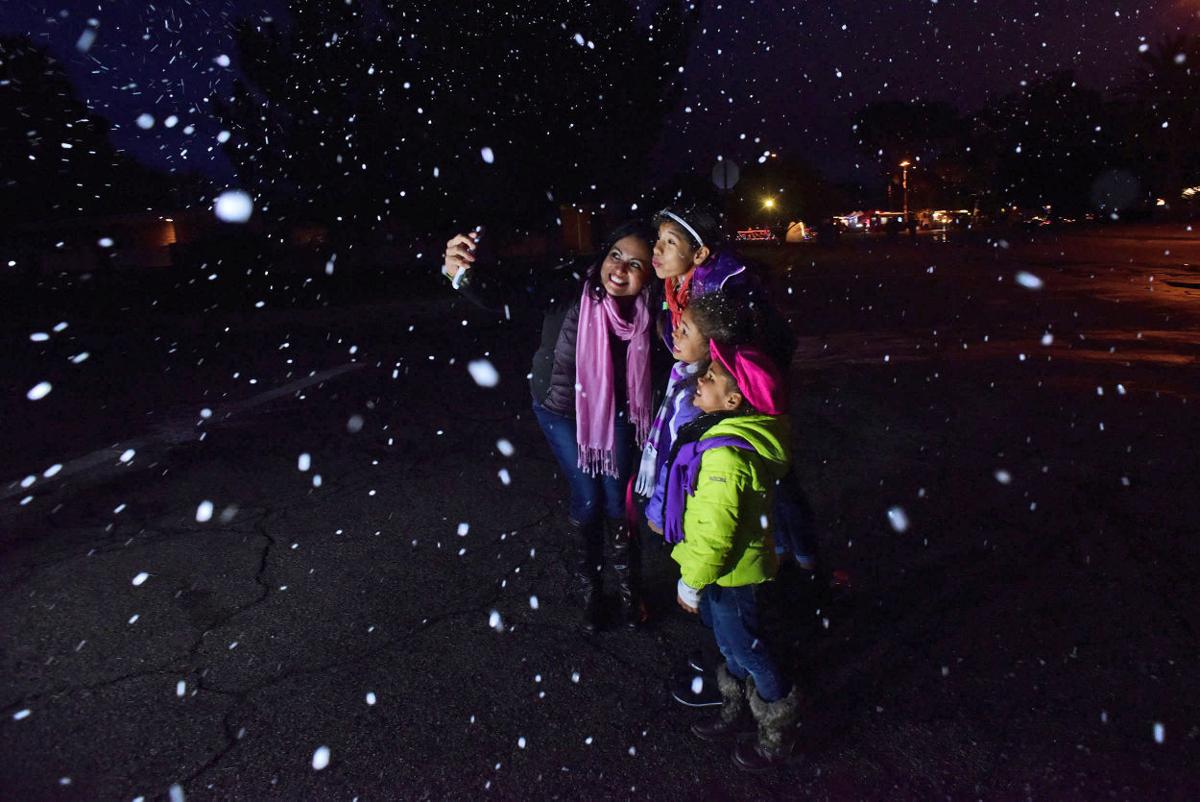 Liliana Valenzuela snaps a selfie with her children Gaby, Sofia and Ana Valenzuela as bubbles that look like snow drift down during opening night of the Winterhaven Festival of Lights. 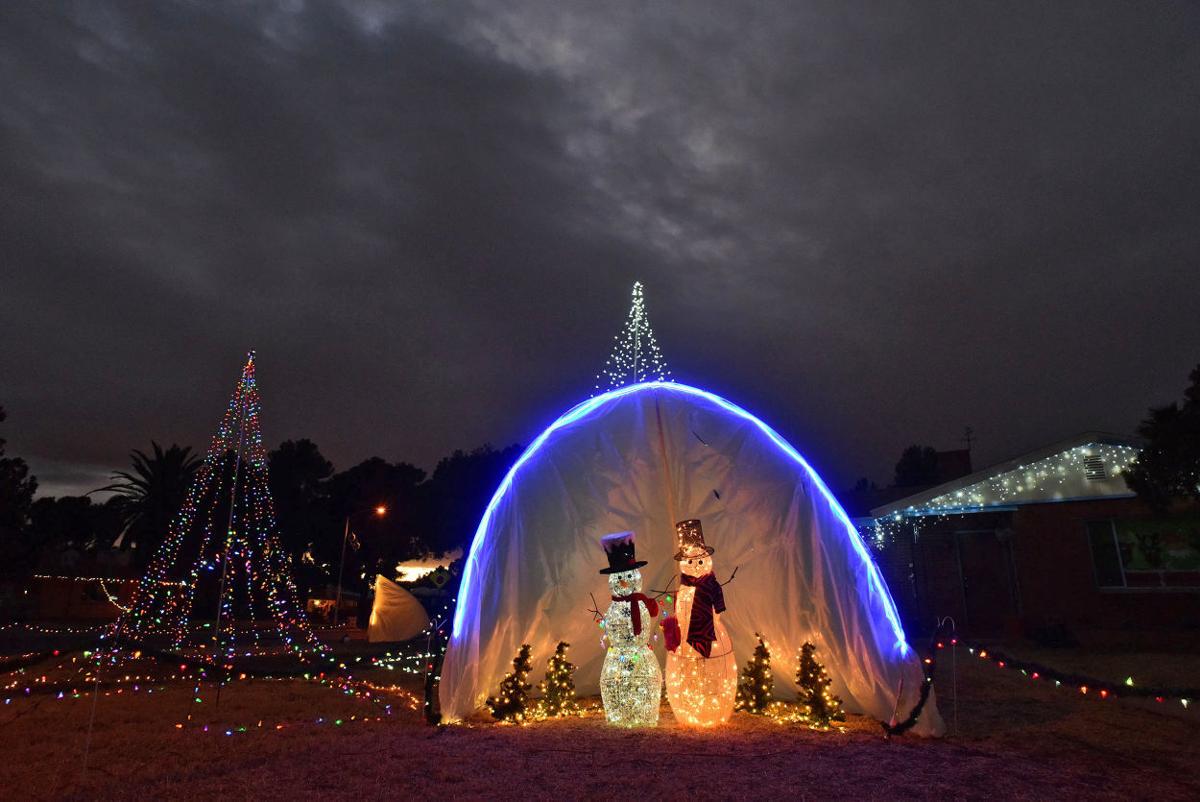 Snowmen sitting cozy are among the holiday light and decoration extravaganza that fills Winterhaven. 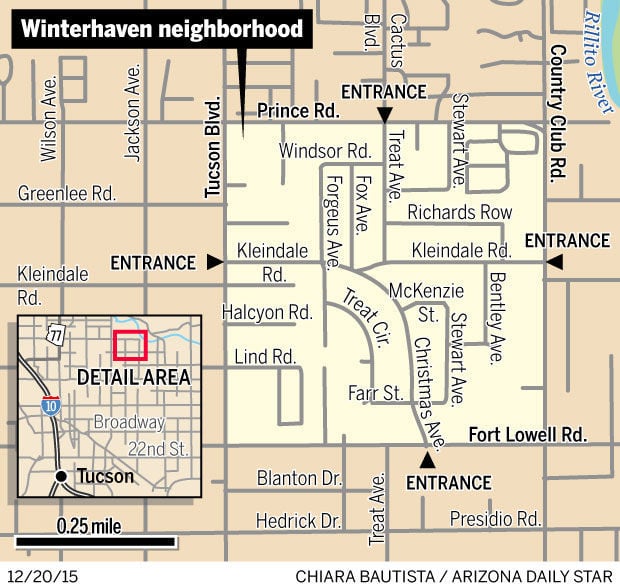 For 66 years, Winterhaven has given Tucson a sparkling gift: its Festival of Lights.

Thousands of us bundle up and wend our way through the streets of the midtown neighborhood, oohing and aahing at displays that are elaborate and simple, secular and religious, raucous and solemn.

We strolled through last Sunday, the second night of the two-week event. Here’s what we found:

There are four entrances to the festival; we wander in from East Prince Road and find a brightly-lit manger scene, one of the few in Winterhaven. The simple display is like the calm before the storm. A few houses down, at Treat and East Windsor Road, white lights cover a home’s lawn and green lights climb up the trees. Luminarias line the sidewalk. A little farther up, a giant teddy bear balloon and Santa’s sleigh full of gifts demand our attention.

Getting closer to the center of the neighborhood, El Rio Theatre Project has set up chairs and microphones on a front lawn and is about to launch into a reading of “A Christmas Carol,” which it does at 7 p.m. every night of the festival. This is the fourth year they’ve done it, says Michael Givens, the force behind the project. He adapted the Charles Dickens story into a 2½ hour play. “Some people come and sit, others stay a few moments,” he says. This is one play he expects people to walk out on — after all, there’s a lot more to see in Winterhaven.

We head east on Kleindale and run into Phil Curtis, who lets his furry elf cap do the talking: At the apex is a bopping head of a red Grinch that plays — continuously — “It’s beginning to look a lot like Christmas.” The hat has been a favorite of his for years, he says, though he is in danger of losing it annually: after the holidays, his wife throws it away and he has to dig it out of the garbage.

A little farther down Kleindale, Grace Victoria Ryan admires a house dripping in lights — the folks along this street are steeped in the tradition and many dabble in excess when it comes to Christmas decorations. “I like the atmosphere caused by the lights that’s created between you and the person you are with,” says the Marana High School freshman. She’s a veteran of the event; her fellow freshman at Marana, Jake Morey, is experiencing it for the first time. “It’s cool,” he says as the two look at each other and giggle.

Nearby, Rene Brown’s eyes are big with wonder as she takes in the white lights that line a walk and climb a tree. Rene is 5 months old, and she’ll be back. “This is fun and festive,” says her mother, Amber. Amber’s husband Luke, holds Rene, their firstborn, and nods in agreement. “This will be a family tradition now,” says Amber.

Farther east on Kleindale we stop by a house that screams its allegiance to the University of Arizona Wildcats. “Love Red. Live Blue,” says one sign on the lawn. Another: “Wildcat life.” Across the front is a banner that blares “Bear down.” Brenna Alvarez stops and snaps a picture. “I really like it,” she says, “but I go to the UA.”

We turn north on Bentley and are drawn to a house that nearly outshines them all. The roof is covered with lights, and a giant bow sits on top. Reindeer and over-sized candy canes are scattered around. Taking it all in is owner Tim Garcia, sitting at a bonfire on his lawn. He says his decor took him “two or three days and about 4,000 lights on the roof.” It’s his third Christmas here and he hasn’t tired of the crowds or the inconvenience of streets blocked to outside traffic. “It’s wonderful,” he says.

At the far end of the lawn, a small crowd has gathered. Garcia has set up a child-sized table with paper, crayons and a sign encouraging letters to Santa. He even has a postbox there. Natalia Holliday, 4, draws a picture — a big heart — to go with her note. Done with that, she flips the page over and turns to her father, Bill Holliday. “Daddy,” she asks, “how do you spell Santa?” She has an important message to send: she wants a doll with hair she can comb.

As Bentley turns into Richards Row, there sits a house with oversized teddy bears stuffed on the lawn. Elvis sings “(Let Me Be) Your Teddy Bear.” It’s hard not to start dancing.

Richards Row seems to have a theme — Disney characters. The decked-out houses — that’s almost all of them — pay homage to Mickey Mouse, the Little Mermaid, and all sorts of princesses. One is just riddled with riddles: “Why did Mickey take a trip to space?” “He wanted to find Pluto.” “What is Peter Pan’s favorite fast food restaurant?” “Wendy’s.” “Oh my gosh, that’s funny,” says a delighted Maryana Angulo. She pauses for a moment and then says: “Winterhaven is the best part of Christmas.”

Richards Row works its way back to Treat and we go south to Christmas and then take the first side street to the east, McKenzie.

McKenzie is full of more glowing Disney characters and as we turn the corner into Stewart, we confront a giant sign lit in white light, saying “Believe.” Floating above it is an illuminated cross. Nearby on Stewart is a house that pays excessive tribute to “Game of Thorns,” complete with the Iron Throne as a centerpiece.

Not far away, a giant train engine spews steam. “All I want for Christmas” plays in the background.

Stewart takes us to Farr Street and across to the west side of Christmas. It’s nearly impossible to not stop in awe at the extensive display at the home on Christmas and Farr: A lawn has become a detailed landing strip for Santa and his reindeer. White lights are squared off across the lawn, and an elf — with moving arms — guides the sled in for a landing.

On the opposite side of the street, giant firs are decked out tip to trunk in colorful lights. But it is the giant “Candy Cane Lane” sign stretching over Farr that demands attention. Glowing candy canes line the street. As we pass under the sign, the crowds are thicker and the lights brighter.

Chloe Allen, wearing a scarf wrapped in lights, stands in front of a house where Farr curves into Treat Circle. Her favorite display, the 9-year-old says, “has gotta be this one,” as she points to a dancing fountain. The lights change colors and the water keeps in time with the music — it’s a mini-Bellagio fountain. All the houses around this part of Farr and Treat Circle radiate with imagination and holiday spirit.

Neal Grissom, who owns one of those homes, can take the credit. For the past six years or so, Grissom has designed and built elaborate displays for his neighbors, who are happy to deck their lawns with his creations. “They love it because they don’t have to do it,” says Grissom with a laugh.

Every year, his displays get more elaborate — this year, the Candy Cane Lane sign was new. Next year, it’ll be the Eiffel Tower. “It’ll be about 30-feet, with a water feature,” he says later in a phone interview.

The time and energy he puts into making his little neck of the neighborhood glow is well spent, Grissom says. “I just go out and walk around and it’s worth every bit of it.”

Farther down Treat Circle, a menorah lights up a front yard. A few houses from that, a jazz band keeps things moving along. Emily Amadhia Albee-King, who performs around the world under the name Amadhia, belts out jazz standards. A sign announces the next concert.

Treat Circle empties into Forgeus and we take that east to Kleindale, where carolers draw a small crowd. Things are really hopping across the street on the corner of Kleindale and Forgeus, where a machine spews bubbles that look just like snow into the air. Jade Rubia, 7, runs back and forth trying to catch them. “I want to play with them,” she says with glee.

More lights, more holiday cheer, lead us down Forgeus and over to Windsor. We peek down Fox Avenue and fall in love with a house with signs of peace crowding the lawn. And then we are back to our starting point on Treat.

By this time, close to 9 p.m., the crowds are thick and a convoy of jeep-pulled wagons loaded with people makes everything seem even more crowded.

It is intense. While we are grateful that Winterhaven gives us this gift each year, we can’t imagine living there — so much work goes into the annual event.

Apparently, we aren’t alone. We notice a house with the only decoration a single, well-lit sign on the lawn.

We pass a house a few doors down that shimmers with a jolly spirit.

We leave the neighborhood feeling the same way.

What: The 66th annual Winterhaven Festival of Lights.

A holiday card from the Arizona Daily Star.

A family pauses for a photo at the Candy Cane Lane sign on Farr Street toward — where else? — Treat Circle. (Treat and candy canes seem to go together.)

We’re guessing you recognize the inflatable characters on this roof on McKenzie Street.

A bow of lights tops off this sparkling house covered with lights, lights and more lights at the Winterhaven Festival of Lights.

Thousands of lights and a ton of holiday characters greet visitors to Winterhaven.

A “Doctor Who” T.A.R.D.I.S. and Snoopy’s dog house with “Bad Wolf” written on it on the corner of Richards Row and Bentley Avenue during the opening night of the Winterhaven Festival of Lights on Saturday, Dec. 12, 2015.

Liliana Valenzuela snaps a selfie with her children Gaby, Sofia and Ana Valenzuela as bubbles that look like snow drift down during opening night of the Winterhaven Festival of Lights.

Snowmen sitting cozy are among the holiday light and decoration extravaganza that fills Winterhaven.