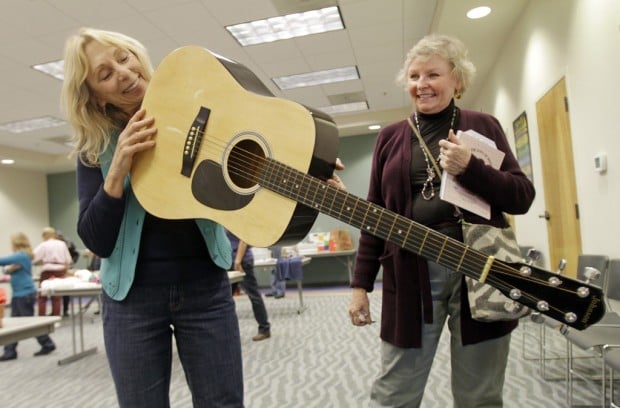 This painted cabinet serves as a Little Free Library in the Garden District, near the Martha Cooper Library. 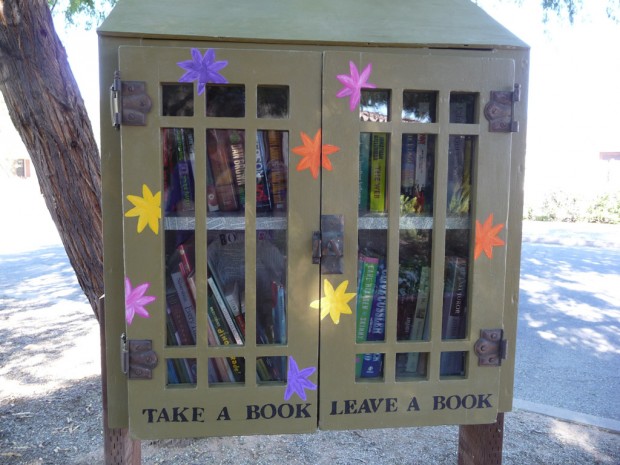 At the FreeCycle event at the Kirk-Bear Canyon Library last year, Marilyn Ryan Hulbert got this guitar from Gloria Davis, right, and gave Davis a cookbook in exchange.

The guests have gone, the holiday hullabaloo hushed.

What's left: stuff. Ribbons. Wrapping paper. And an assortment of misguided gifts and other unwanted items that promise to take up space for the next year, if not forever.

Rather than throw these things away, wouldn't it be great to give them to someone who could love them - and even get something you truly want in return?

Freecycle.org, founded by Deron Beal on May 1, 2003, enables exactly that.

Beal says the website he founded in Tucson now serves communities in more than 110 countries, and he expects to reach 10 million participants worldwide this year.

The network is moderated by volunteers with the goal of "keeping good stuff out of landfills."

No payment is exchanged or even allowed on the swap site.

"That is our main rule," Beal says - "absolutely no strings attached."

This will be the third year that Tucsonans take the concept further. On Saturday, seven Pima County Public Library branches around the metro area will host post-holiday Freecycle events. Beal notes the concept works particularly well for items like holiday sweaters.

Beal and his neighbor, Karen Greene, who is the adult-services librarian at the Joel D. Valdez Main Library, hatched the plan for the face-to-face meet-up after the 2010 holiday season. They scheduled the first one for the first Saturday the library was open after the holidays.

That date? Jan. 8, 2011 - the day six people were killed and 13 injured, including then-U.S. Rep. Gabrielle Giffords, when a gunman opened fire at a Congress on Your Corner event.

People started hearing about the shooting in the hour or two before the Freecycle swap, Greene says. The organizers discussed canceling.

"I think everyone was just in shock," she says, "and I think we just figured, 'Let's just see what happens.' " As it turned out, people not only come, but many stayed as long as they could.

"It gave people a place to go and be around other people, as well as feel like they were doing something good," Greene says.

She relates other times the trading events touched lives: a boy receiving his first guitar, a family choosing its first dish set as part of establishing its first home.

At one gathering, she remembers, a woman brought a stack of children's books authored by her late mother. Another browser saw the books and remarked that she had known the author, and the woman was able to enjoy her mother's presence with a person from her past.

The spirit of sharing and preventing waste are the defining characteristics of these events, and of the Freecycle philosophy.

Using recycled items not only keeps them out of landfills, Beal says, but it saves all the resources used to make that item new for someone else to buy.

The various library branches may each establish their own system of facilitating trades. At the Main Library, for example, each item brought is exchanged for a ticket, which is then exchanged for a desired item.

However, organizers ask that no one bring large items like "motorcycles or refrigerators."

When asked if there's a story there, Greene laughs and says, "There isn't, but there was a fear!"

Tucson is home to at least a couple Little Free Libraries, which are free book-sharing boxes where anyone can "take a book, return a book." It's a trend taking hold throughout the country.

In Tucson, the one pictured above has been spotted in the Garden District near the Martha Cooper Library.

In the Dunbar Spring Neighborhood, there's a book-filled cubby next to a Gila monster bench that appears to read from Paul Laurence Dunbar's "The End of the Chapter."

To build one or find out more, visit: LittleFreeLibrary.org

Learn more about Beyond Tucson, a communitywide event that commemorates the second anniversary of the Jan. 8, 2011, shooting with a number of outdoor activities on Saturday.

Beyond Tucson was initiated by the extended family of Gabe Zimmerman, the 30-year-old congressional aide who died in the shooting.

Find a full schedule of hikes and other events at www.beyond- tucson.org

Freecycle, an opportunity to exchange items with other locals

• Cost: Bring an item to take an item, as many as you like.

This painted cabinet serves as a Little Free Library in the Garden District, near the Martha Cooper Library.

At the FreeCycle event at the Kirk-Bear Canyon Library last year, Marilyn Ryan Hulbert got this guitar from Gloria Davis, right, and gave Davis a cookbook in exchange.