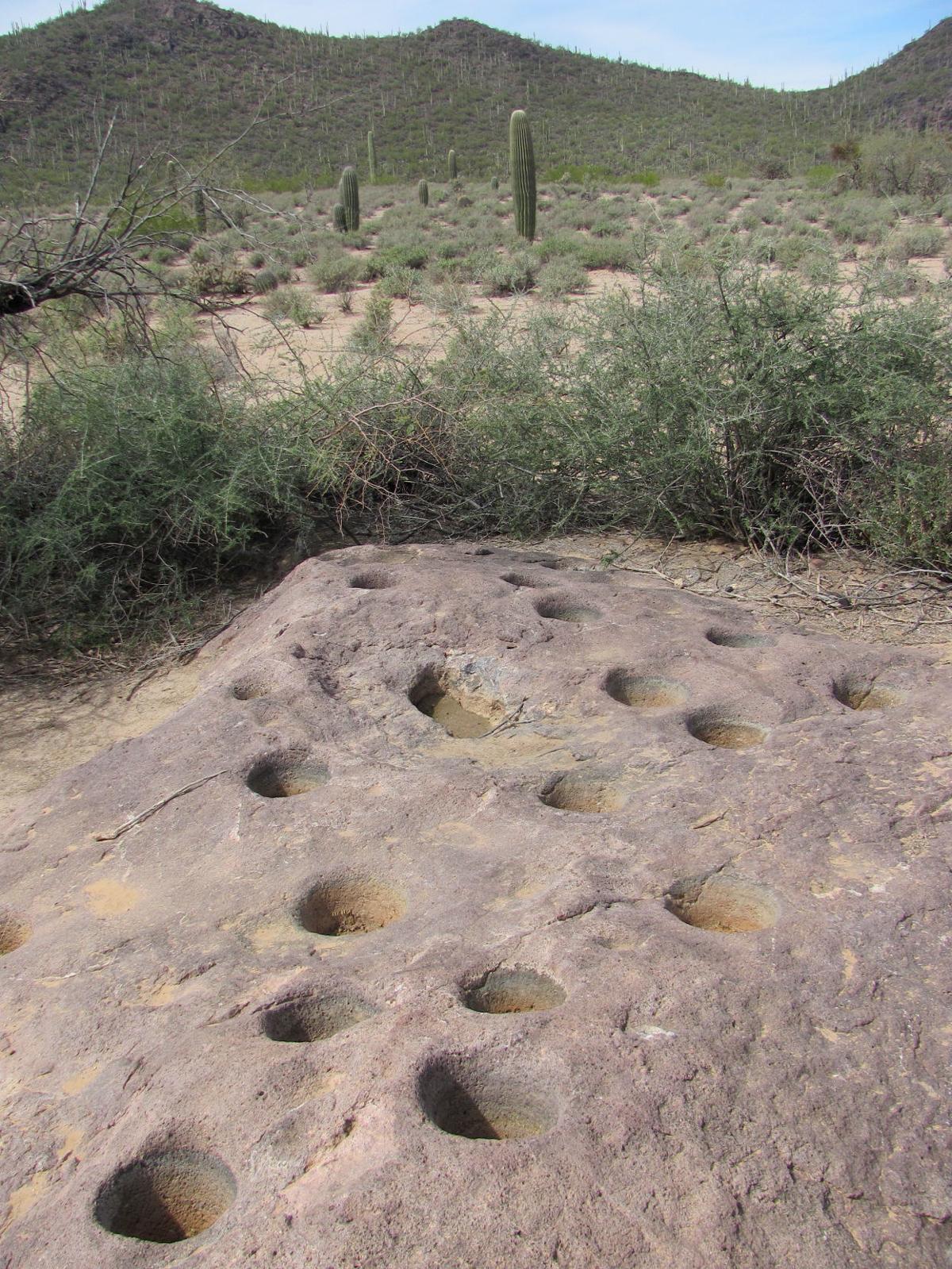 Morteros, or bedrock mortars, were used by ancient people to grind and process plant foods. 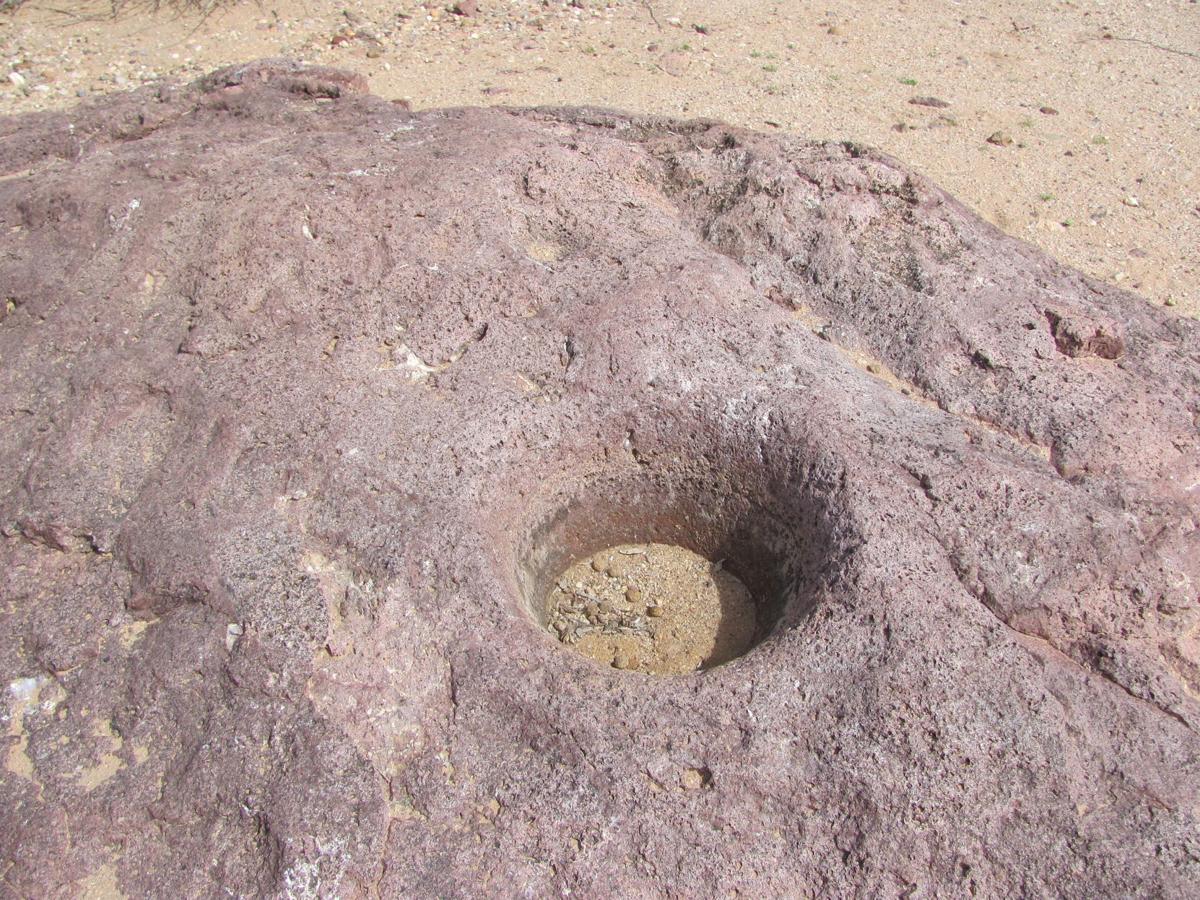 One of the morteros, or bedrock mortars, that were used by ancient peoples to grind and process plant foods. They are protected today at Los Morteros Conservation Area northwest of Tucson. 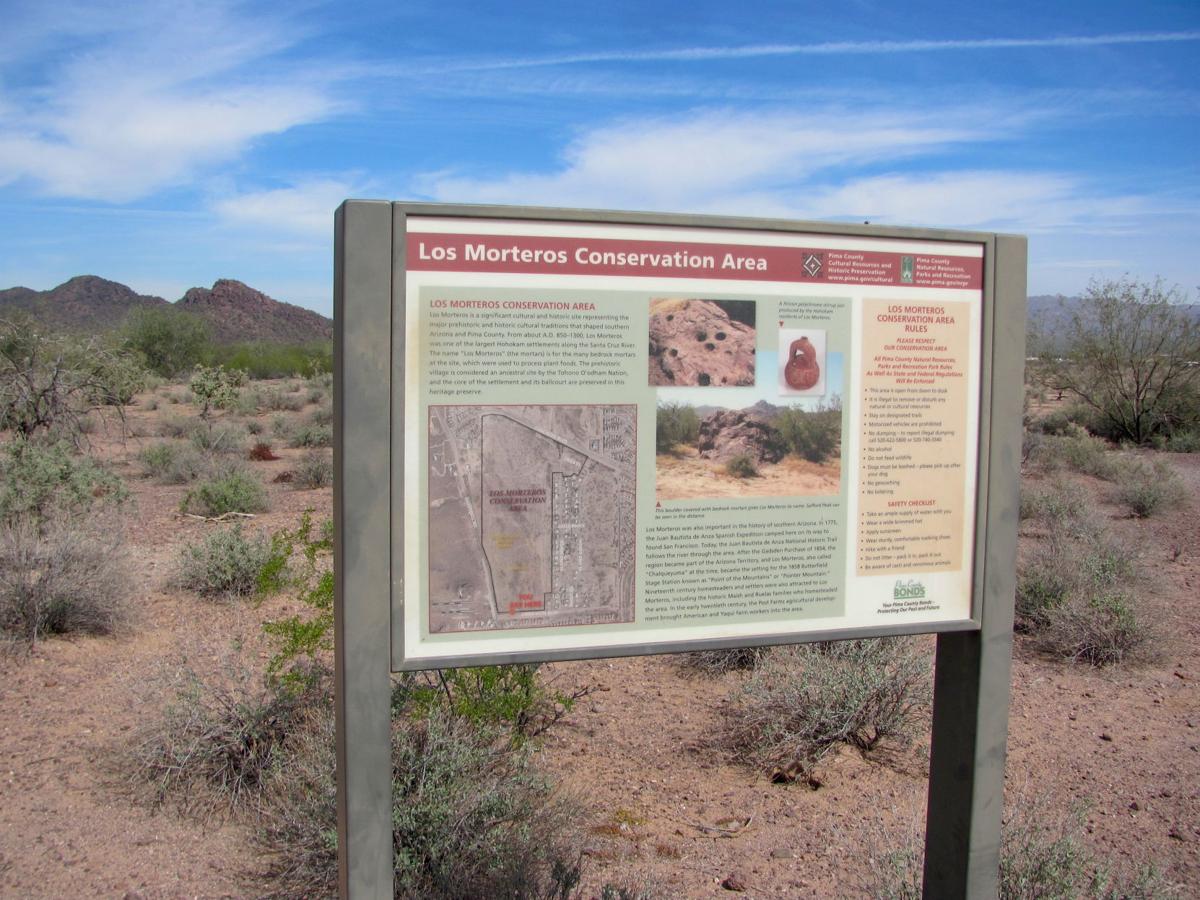 About 1,000 years ago, people carved dozens of shallow holes into slabs of bedrock in a lonesome patch of desert northwest of modern-day Tucson.

They are preserved today at a site known as Los Morteros Conservation area.

“Los Morteros is a significant cultural and historic site representing the major prehistoric and historic cultural traditions that shaped Southern Arizona and Pima County,” says an information sign at the entrance to the site.

“From about A.D. 850-1300, Los Morteros was one of the largest Hohokam settlements along the Santa Cruz River.”

The conservation area, with an entrance northeast of Silverbell Road and Linda Vista Boulevard, has short trails leading to the bedrock mortars. A trailhead map shows trail routes to the mortars and the remains of an ancient ball court.

“These mortars are interesting. We see them not only in Southern Arizona but also in parts of New Mexico and northern Sonora” in Mexico, said Allen Dart, executive director of Old Pueblo Archaeology in Tucson. Dart sometimes leads tours to the morteros site.

“The mortars tend to be in areas where there are trees with beans” such as mesquite and palo verde, he said.

“The belief is that the Hohokam used them for pulverizing mesquite beans” and perhaps other beans as well.

Other depressions in the bedrock might have been used for corn grinding or sharpening tools, Dart said, noting that the bedrock is a type of volcanic rock called Tucson mountain andesite.

TAKE CARE AT THE SITE

Pima County officials emphasize that the 120-acre morteros site is a historic treasure and that it is critically important that visitors leave it as it is.

“We need to emphasize to the public how important it is to preserve this site by not disturbing the site and not collecting artifacts so that future generations can learn about our heritage,” said Linda Mayro, director of sustainability, conservation and historic preservation for the county.

Take Silverbell Road from Tucson northwest and then north to Linda Vista Boulevard. Turn right on Linda Vista and drive a short way to the site entrance with signs.

There is no admission fee.

Do you ever wonder how healthy Thanksgiving turkey really is?

How to organize your kitchen for holiday cooking

How to organize your kitchen for holiday cooking

Morteros, or bedrock mortars, were used by ancient people to grind and process plant foods.

One of the morteros, or bedrock mortars, that were used by ancient peoples to grind and process plant foods. They are protected today at Los Morteros Conservation Area northwest of Tucson.