Cindy Hall takes two of her dogs, Tucker, middle, and Heather, right, for an afternoon stroll around the neighborhood. Also along for the walk is Cowboy, at left, who is receiving foster care. 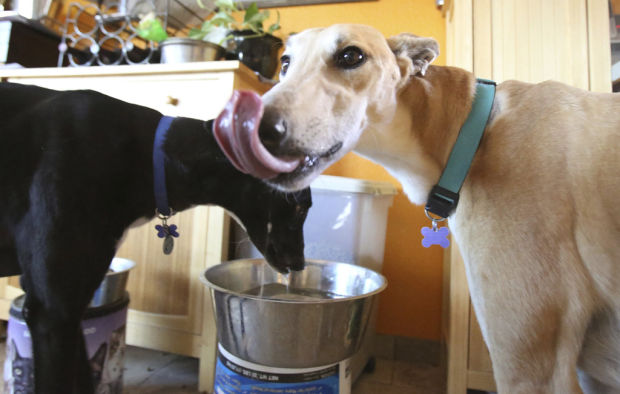 After their walk, Tucker takes a drink of water while Cowboy waits his turn. Cindy Hall, a teacher, prefers walking her pack in the afternoons after coming home from the school. 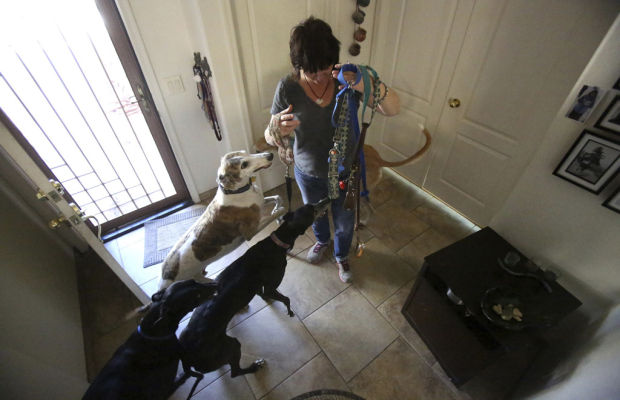 Cindy Hall's pack of canines gathers at the door, eagerly awaiting the walk. Taking care of dogs is "very energizing," Hall says. "It's exhausting, but it's a good exhausting, kind of like working out."

Hall has three greys of her own, plus a rambunctious foster who's learning the ropes of living with a family. As animal care director of the year-old Southern Arizona Greyhound Adoption nonprofit, she oversees the welfare of about 20 to 25 dogs at any given time.

Monday, as part of National Adopt-a-Greyhound Month, the group launches a series of events to acquaint the public with the breed and - its members hope - find their beloved dogs homes.

"We figure this is the time to really showcase our greyhounds and expose the public at large to what great companions they are," said John Clark, president of Southern Arizona Greyhound Adoption. "They're not that visible a breed in a lot of areas. We have to advocate for them."

As any greyhound owner will tell you, owning one - or more - is a life-changer.

That was certainly true for Hall.

Her seven-year love affair with greyhounds began on a trip to Prescott for an arts festival. A greyhound rescue group happened to be part of the event, and Hall, 47, a teacher and mother of two teenage daughters, couldn't tear herself away from the sweet-natured dogs. Her husband, Jeff, was already pushing for a pooch. Once they got home, the Halls did more research on rescue greys. In about a month, they welcomed Gordon into their home. Three weeks later, Jenny followed.

"There's something in their eyes; they're old souls," explained Hall, who teaches sixth grade at Rattlesnake Ridge Elementary in Marana. "They definitely are one of the most mistreated dogs, I feel. But they're resilient - what I believe they go through and to be as gentle as they are."

Before long, the family of four was fostering dogs. Hall estimates they've welcomed more than 50.

Every new greyhound is like a 60- to 70-pound toddler. Because they've lived only in kennels, the dogs aren't used to home life. The house needs to be childproofed. The girls - who've lost quite a few Pillow Pets to foster dogs - need to be reminded to put away stuffed animals and the TV remote.

Sometimes, the dogs are really fearful.

"You meet them where they're at," Hall said. "You don't push them."

On occasion, the Halls have fostered dogs with medical issues. In fact, their first foster had "happy tail," a condition in which greyhounds' bony, thin tails bleed profusely when they're smacked against hard surfaces. The family came home one day and found blood smeared everywhere.

Southern Arizona Greyhound Adoption takes in racetrack dogs, usually from Tucson but recently it took in eight from a track in Tijuana, Mexico, Hall said.

Typically, foster dogs stay for about a month, longer if there are medical issues. The dogs go into foster homes after a two-week stint at a local kennel, during which time they're checked by a vet, dewormed and spayed or neutered.

The Halls try to get dogs on Fridays, so that the family can spend the whole weekend with them. It's actually pretty quick to train them to use the doggy door, Hall said, and the four-legged veterans teach rookies the rules.

Their first greyhounds, Gordon and Jenny, have passed away. Ruling the roost these days: Heather, 10, a former brood mama who never raced but bore puppies; Tucker, 3, who has a charming underbite; Walter, 10, who's quick to slip his slender head onto an open lap; and 4-year-old Cowboy, the fawn-colored foster who enjoys countersurfing and recently discovered the joys of squeaky toys. Oh - and the Halls have three cats: Max, Sam and Bob, who thinks he's a greyhound and likes to pad along with the canine posse on its daily walk.

Each new dog offers challenges, Hall said. The family gets attached and it's hard to see their fosters move on. But they believe in what they do and, Hall said, if they didn't do it, the dogs wouldn't have the chance to find permanent homes.

"It's very energizing," Hall said. "It's exhausting, but it's a good exhausting, kind of like working out."

It costs a minimum of $600 to transition one retired racing greyhound "to civilian life" for one month, with the highest costs coming for vet care and kenneling, says Southern Arizona Greyhound Adoption. The group charges a $250 adoption fee.

Earlier this year, the park cut its racing schedule from six days a week to four.

Tucson Greyhound Park is the only place in Arizona with dog racing, and our state is one of seven with racing, says Southern Arizona Greyhound Adoption. Other states with racing: Alabama, Arkansas, Florida, Iowa, Texas and West Virginia.

These plants are toxic for your dogs and cats

Cindy Hall takes two of her dogs, Tucker, middle, and Heather, right, for an afternoon stroll around the neighborhood. Also along for the walk is Cowboy, at left, who is receiving foster care.

After their walk, Tucker takes a drink of water while Cowboy waits his turn. Cindy Hall, a teacher, prefers walking her pack in the afternoons after coming home from the school.

Cindy Hall's pack of canines gathers at the door, eagerly awaiting the walk. Taking care of dogs is "very energizing," Hall says. "It's exhausting, but it's a good exhausting, kind of like working out."