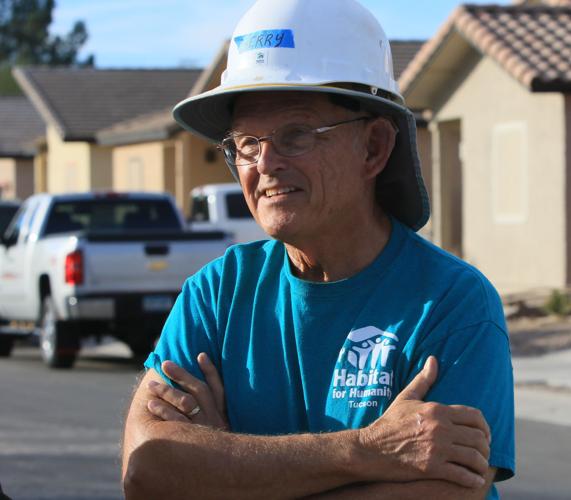 Winter visitor Gerry Keener has called Tucson home for 20 winters. While he’s here, he serves as an unpaid supervisor with Habitat for Humanity, helping to build homes. 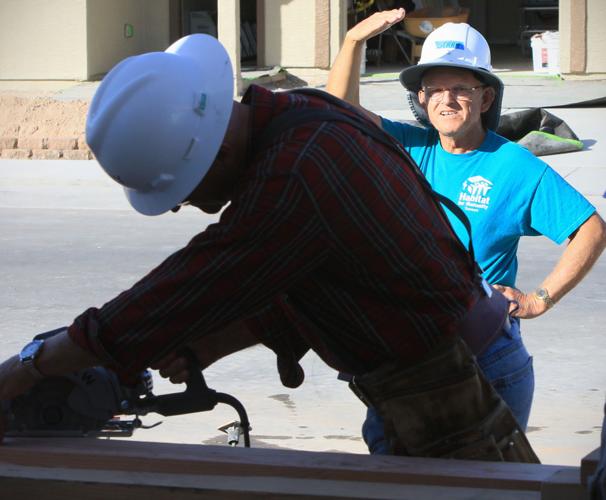 Gerry Keener used to keep track of the houses he’s built over the years.

Sounds like one busy contractor, right? No. Not at all. Keener isn’t a contractor — he’s a Habitat for Humanity volunteer.

Keener, 82, leads a team from Rincon Country West RV Resort made up of winter visitors. They’re not so much snowbirds as snowbuilders. Every Thursday from January through March, the crew is busy sawing, painting and making the dream of home ownership a reality for many Tucsonans.

It’s been that way for 14 winters, thanks to Keener, who rallies the troops and supervises at the Habitat build sites.

“I’m not a golfer,” says Keener, a retired elementary-school principal. “I swing a hammer instead.”

For 27 years, Keener and his wife, Carolyn, also 82 and a retired teacher, have traveled around the United States and the world as Habitat volunteers.

“My wife and I wanted to retire and do something to give back,” says Keener, father of three and grandfather of four.

And, they love helping out in their half-time home. The duo were actually volunteering in New Mexico when a fellow volunteer urged them to check out Tucson’s Habitat program. They did and have wintered here for the past 20 years.

When they first began coming to town, the Keeners were spending five days a week working with Habitat for Humanity. Gerry Keener recalls sitting in the hot tub in the evenings, swapping stories with other Rincon residents about how they’d spent their days.

Once word spread about the Keeners’ efforts, others jumped in, which is not surprising when you hear how active that group is. Recently, residents gathered to take pictures for the photo directory. Rincon Country West activity director Janet Richards counted 87 different clubs, with more than 1,500 members. Some volunteers make patriotic quilts for veterans, a theater group performs at assisted-living facilities, and it seems like there’s always donations being raised for some worthy cause.

“It’s amazing the power of volunteerism in this little community here in Tucson,” Richards says.

Last year, 38 men and women from Rincon Country helped with the construction of 14 Habitat for Humanity homes. Laura Sanchez, marketing and communications manager for Habitat for Humanity Tucson, says the Rincon residents are unique in their dedication and the number of skilled volunteers who lend a hand.

“They’re just so wonderful to help out and really caring about the mission,” she says.

Though Carolyn has retired from the construction site — she does help out as a “cookie fairy,” though, supplying goodies for their 10 a.m. coffee break — Gerry’s still out there weekly.

One recent Thursday morning, 21 folks from the RV park were spread across two south-side streets working on 15 houses. Some sites just had the foundation poured, while others were almost move-in ready. Keener — wearing a white hard hat with “Gerry” emblazoned in black Sharpie, capital letters on a strip of blue tape — cuts across the dirt to check on one house where volunteers are working their way down a “punch list,” a final tally of fixes to be made.

“Somebody brushed instead of rolling,” she tells him. Doors are supposed to be painted with rollers to avoid visible brush strokes.

Peters, who’s a longtime Habitat volunteer herself, said she decided to live at Rincon because of its involvement with the homebuilding program. She’s not alone — that’s something Keener loves to hear and is told often.

“Where I get my real satisfaction is getting people involved,” says Keener, who’s built homes in 15 different states and five different countries — once alongside former President Jimmy Carter and his wife, Rosalynn, in South Korea.

“They were wonderful, just down-to-earth people,” says Keener, who spends the rest of the year in Eugene, Oregon, tending their garden. “He’d say, ‘People, don’t come by and bother me because if you are, you’re not working.’”

Keener says he can’t single out any one city that he’s loved more than the others, but he definitely enjoys Tucson’s consistently warm, sunny weather. Although he does recall one time a few years back when his crew was painting indoors and rain stopped the whole project.

“At home,” he chuckled, “if we didn’t work in the rain, we’d never get anything done.”

Learn more about volunteering in Tucson at www.habitattucson.org

She and daughter have put in 300 hours volunteering a home site.

Fundraisers underway, letters of support sent for the 13-year-old.

Door colors can earn or save you thousands of dollars

'Gifted' dogs have this wonderful trait in common

'Gifted' dogs have this wonderful trait in common

Tips for improving your heart health after COVID

Tips for improving your heart health after COVID

Winter visitor Gerry Keener has called Tucson home for 20 winters. While he’s here, he serves as an unpaid supervisor with Habitat for Humanity, helping to build homes.