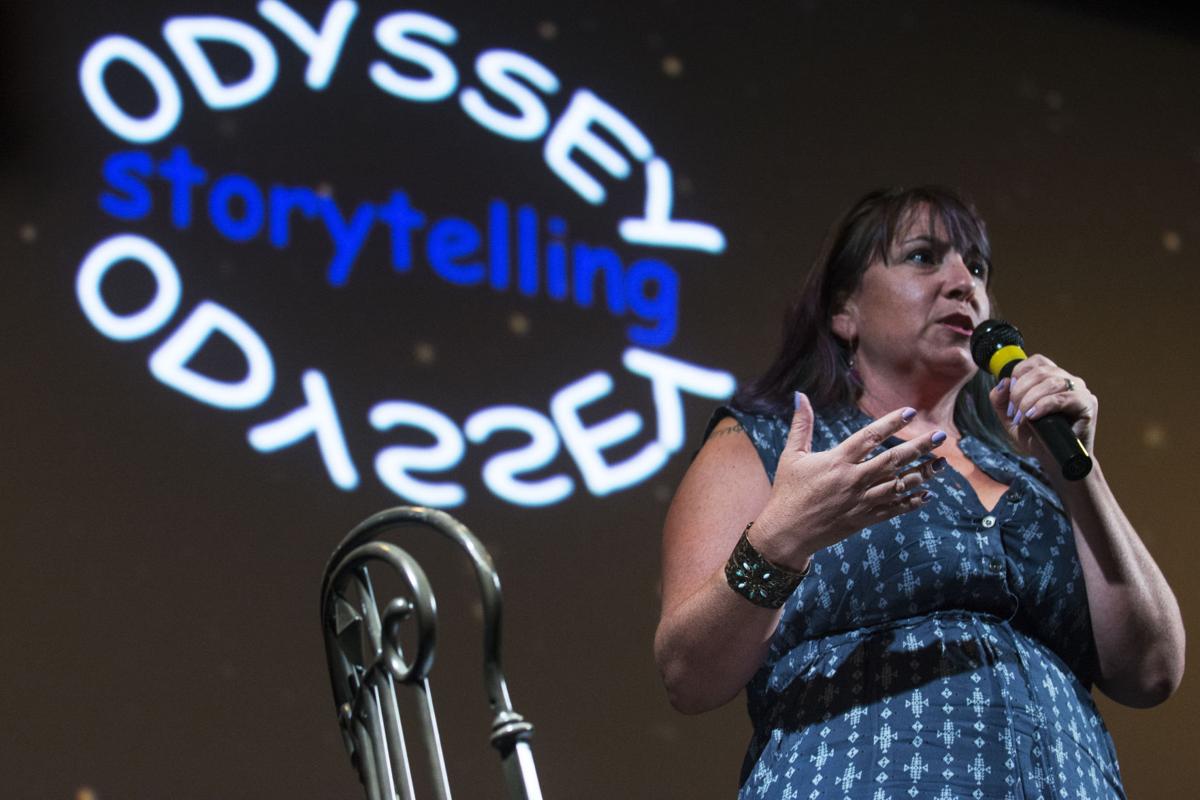 Maryann Green, a drama teacher at Rincon/University High School, tells a story about a theater production. Audience members cried, laughed and held their breath, all in a 10-minute span. 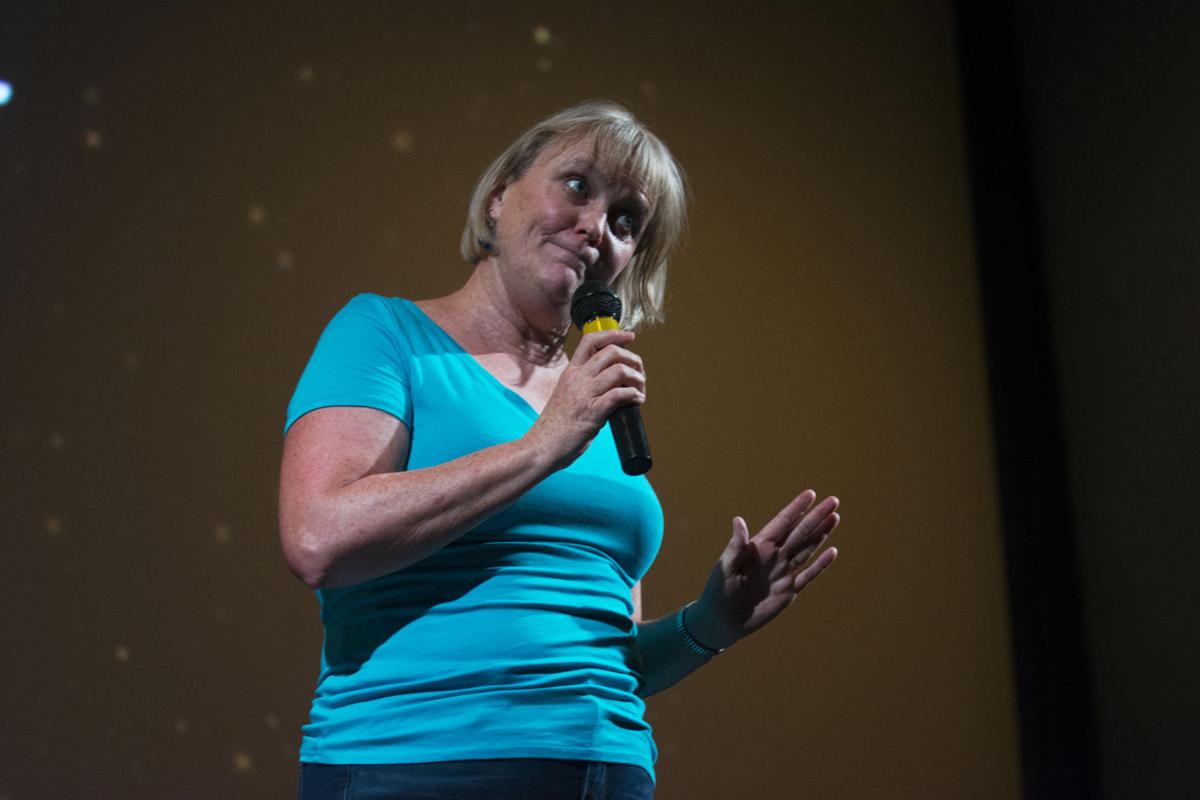 Storytelling is growing in popularity. Kim Gayton Elliot, a drama teacher at Cholla High Magnet School, relays a story about her love for Scrabble.

By Danyelle Khmara For the Arizona Daily Star

A crowd of people filled The Flycatcher on North Fourth Avenue on a recent Wednesday night.

They sat shoulder to shoulder on chairs that lined the dance floor, snuggled for space on the carpeted stairs or stood attentively with eyes on the stage.

But they weren’t there to listen to the latest band; they were there for something as old as humanity itself.

One by one, female raconteurs got up and told their stories.

They spoke of overcoming racism, of recovering from rape, of an overzealous bike ride through the desert, of trying to reach a group of high school delinquents. All the stories tied in to the night’s theme — “It’s a dry heat” — but beyond that, they were tales of resilience and the will to persevere.

Live storytelling is an art that’s growing in popularity across the nation and in Tucson.

Female StoryTellers, known as FST! and pronounced as “fist,” plays monthly themed shows at The Flycatcher to a full house.

The group focuses on the day-to-day lives and experiences of women and encourages them to write stories ranging from difficult subjects such as rape, abuse and terminal illness to the seemingly mundane and hilarious, Blumenthal said.

“Nothing’s off limits,” she said.

In its fourth year, FST! is made up solely of female storytellers. It is one of several local groups facilitating monthly storytelling.

“People are so hungry for real stories, told from the heart,” she said. “The power of storytelling breaks down stereotypes, and our culture so desperately needs that.”

People who want to get involved can pitch stories on the group’s website or find out how to volunteer. Each group reads pitched stories and chooses the most compelling. Odyssey also reaches out to known authors and storytellers in the community.

“Some people have been on stage many times, and they’re totally at ease, and some people are really taking a risk and making themselves vulnerable,” Clark said.

Although telling a personal story in front of a room of strangers can be scary, the audiences at these events tend to be supportive.

Telling a story at Odyssey is a safe and loving way to practice speaking in front of people, said Odyssey founder Penelope Starr, adding that for the audience, it’s about relating and recognition of the human experience.

“Occasionally people will tell a story that they’ve never told anybody before,” Starr said. “Being public with whatever might have been tucked away or a secret is so freeing, so empowering.”

Every month, both storytelling groups make donations to various local nonprofits such as the Community Food Bank, Casa Libre and the YWCA.

The popularity of storytelling as a tool for change and healing is spreading beyond the stage.

Clark runs consulting firm Creative Narrations, which offers storytelling training to organizations working on public health issues as a means of reaching people on an emotional level, she said.

Blumenthal and other FST! board members are doing outreach with Teenage Parent High School to launch a storytelling program.

“We’ve seen how empowering this can be,” she said, adding it’s something she wants to pass on to the next generation.

The current popularity of live storytelling started with The Moth, a New York City nonprofit founded in 1997. The Moth has a weekly podcast and radio show and hosts story competitions called story-slams all over the world, at which audience members put their names in a hat for the chance to tell a story.

People are interested in the unscripted nature of these events, where you know you’re going to hear good stories but also have no idea what to expect, said Sophia Paliza-Carre, the producer of Arizona Public Radio’s “Dímelo,” who got her start in radio working for The Moth in New York.

“It’s not just whoever’s the most performative or whoever’s the best comedian,” Paliza-Carre said. “It’s a real balance of, are you a true human being up there telling us something universal and being open with us?”

“Dímelo” held a story-slam last month at St. Charles Tavern with the theme of “belonging.” The bar ran out of seats as close to 150 people squeezed around the 10 storytellers, who took turns telling their tales.

“There’s an emphasis on creating empathy,” Paliza-Carre said. “Maybe as a reaction against some of the terrible stuff out there that’s happening.”

On a recent Thursday night, Rincon High School drama teacher Maryann Green got on stage at Odyssey Storytelling and talked about producing a play based on the national outcry after the 1998 murder of gay student Matthew Shepard.

The audience cried, laughed and held their breaths in anticipation — all in a span of 10 minutes.

“You see yourself in other people’s stories,” Green said. “With what’s happening in the world, it’s important to remember you’re a part of a community.”

Live storytelling not only builds empathy but also gives a mirror to the diverse Tucson community, Clark said.

“It helps us know each other a little bit more,” she said. “It’s so simple but accomplishes so much in making people feel connected.”

Danyelle Khmara is a University of Arizona journalism student who is an apprentice at the Star. Contact her at

“Dímelo” is hosting an all-ages event at 5 p.m. today(SUNDAY, JULY 24), which will feature live storytelling as well as mariachi music and a free taco bar. Go to www.facebook.com/dimelostories for more information.

Odyssey Storytelling is held at 7 p.m. the first Thursday of the month at The Screening Room, 127 E. Congress St. Admission is $8, $6 students. Go to odysseystorytelling.com for more information or to pitch a story.

FST! holds monthly shows at The Flycatcher, admission is $7 suggested donation. Go to www.fstorytellers.com for more information on show times or to pitch a story.

This is why people may turn to astrology

Watch Now: Don't take a deep breath in this city

Watch Now: Don't take a deep breath in this city

Beware: These folks are out to tickle your funny bone

Oriental rugs and textiles on display through Oct. 2.

Colibrí Center for Human Rights is building a database to help identify the dead.

After a divisive election season, dozens of hateful acts have been reported.

Maryann Green, a drama teacher at Rincon/University High School, tells a story about a theater production. Audience members cried, laughed and held their breath, all in a 10-minute span.

Storytelling is growing in popularity. Kim Gayton Elliot, a drama teacher at Cholla High Magnet School, relays a story about her love for Scrabble.