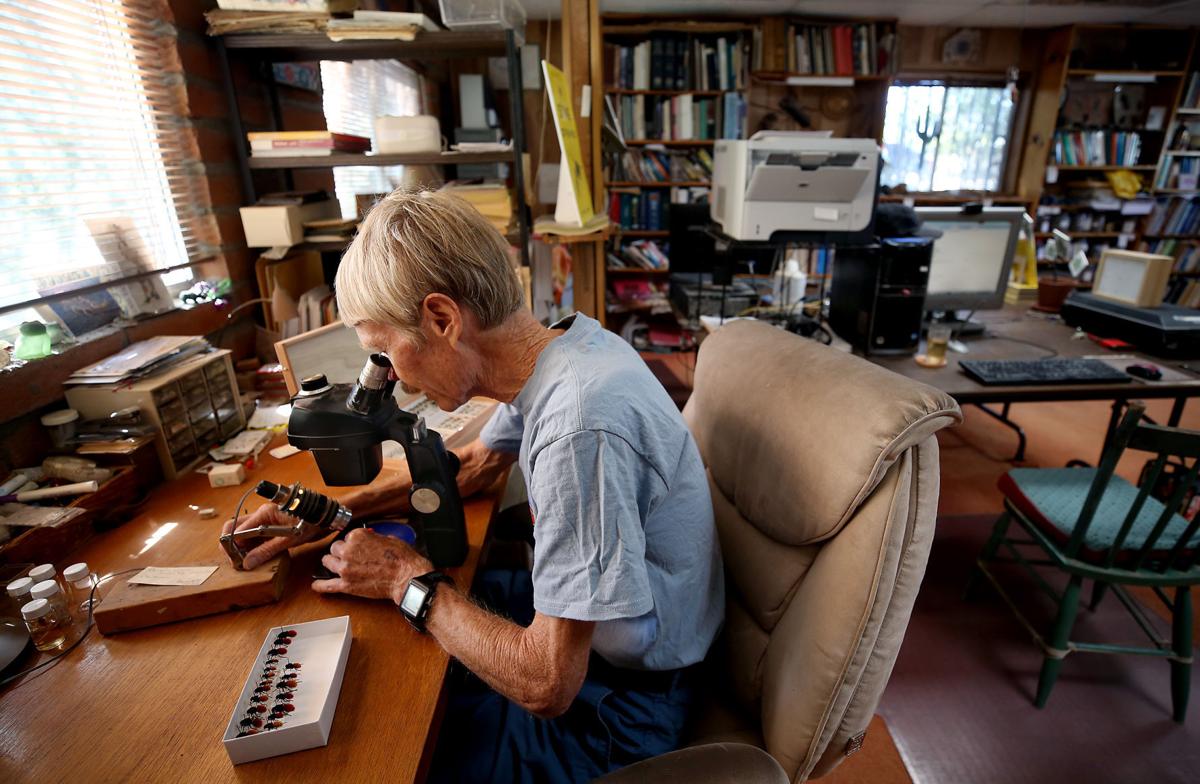 Justin Schmidt, a professor at the University of Arizona, created the Schmidt Sting Pain Index to rate the discomfort of different insect stings. 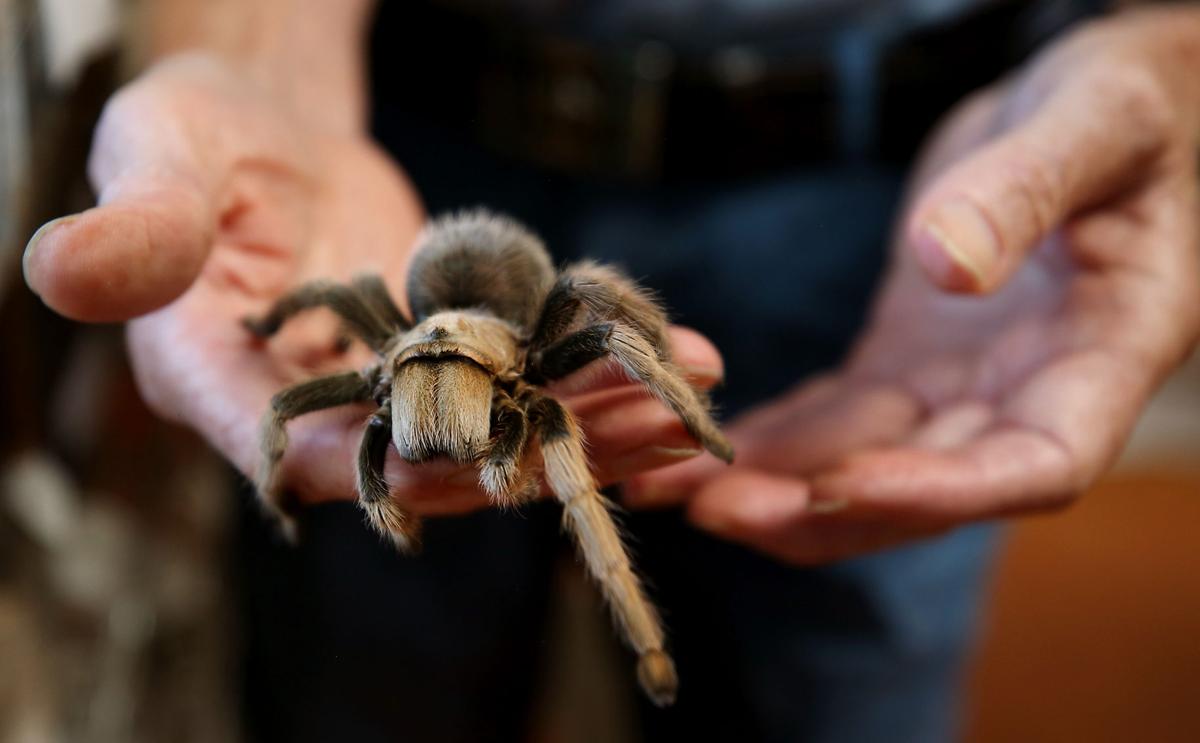 Schmidt shows off a female tarantula that is part of the insect collection he keeps in his office. 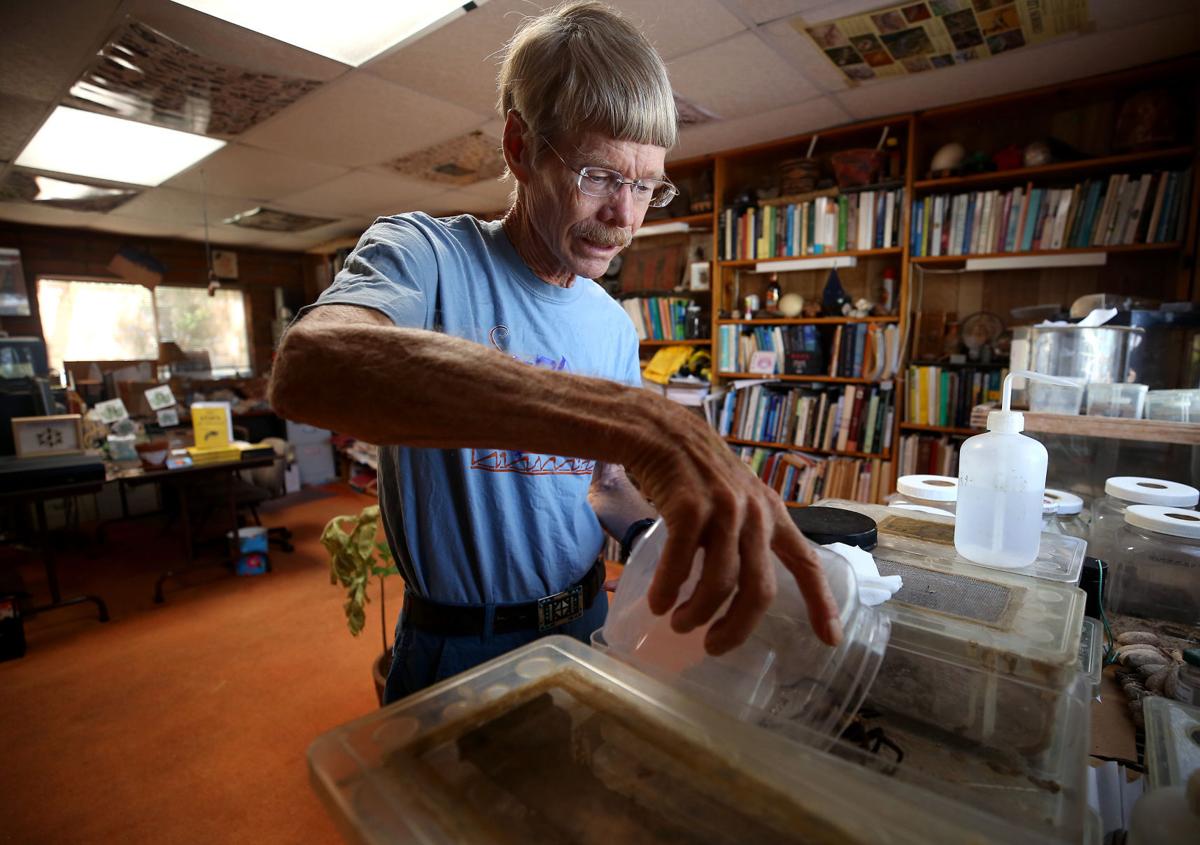 Justin Schmidt places a male tarantula into a bin after finding it in his pool. He keeps insects on hand to take to outreach events he conducts a handful of times each month.

By Ava Garcia Special to the Arizona Daily Star

For many, the thought of a bee sting is enough to make a person avoid any insect that buzzes. But for Dr. Justin Schmidt, it’s all in a day’s work.

Schmidt, an entomologist at the University of Arizona and author of “The Sting of the Wild,” was stung by 83 different insects during his creation of the Schmidt Sting Pain Index. The index rates the pain of a sting on a scale from one to four. Insects such as the mud dauber wasp stack up as a one, while a four is reserved for insects like the bullet ant, which has an intensely painful sting that lasts 12 to 36 hours.

Schmidt stumbled onto the idea of ranking sting pain while studying harvest ants as a graduate student. He studied their venom, collecting it through microsurgery and then analyzing it in a lab. But along the way, he got stung.

“I had been stung by just about everything around as a kid,” he says. “This was entirely different. It really had a much more intense pain, much longer lasting pain, kind of a different qualitative feel to it than a honeybee or yellow jacket … I got intrigued by that.”

This curiosity led him to analyze more insect venoms to compare their chemistry, and again, he got stung.

Determined to make the stings useful, he wrote down the sting conditions and his symptoms.

From there, the study grew. He first used the pain data to see if the pain of a sting correlated to how lethal it was and added more insects to the study as his hypothesis changed.

Schmidt studied sting pain from 1973 up until the last decade, working on other research projects throughout the years but always keeping his study going. His quest to study different insect stings took him around the world, from the Chiricahua Mountains to Malaysia to Africa.

Along the way, he picked up an Ig Nobel Prize in physiology and entomology in 2015 for his creation of the pain index.

He shared the prize with Michael L. Smith, a Cornell University graduate student who was stung repeatedly by honeybees in order to find where the least painful spots on the body are.

The annual Ig Nobel Prizes honor work that first make people laugh, and then make them think, according to their website.

“You’ve got to get the reader’s attention before you can have any kind of learning or anything, and laughter is a great way of doing that,” Schmidt says.

Public interest in his work led Schmidt to publish his 2016 book, “The Sting of the Wild.”. He made sure to weave history and human stories throughout the book’s scientific content about his studies.

“I realized this was an opportunity to do exactly what needs to be done, which is explain the sting pain scale, and while we’re at it, use that as the vehicle to get some good information out there, get it into the public and do it in a fun way that people enjoy,” he says.

Schmidt’s interest in insects stems from his childhood. Growing up in the Northeast, he collected dragonflies and butterflies. Of all the books he read as a child, the memory of a science fiction book featuring a monstrous insect-inhabited planet sticks out to him today.

He studied chemistry for his bachelor and master’s degrees. Then, tired of being cooped up in a lab, he ventured into the field of chemical ecology and studied the chemical components of insects. He now works with collaborators around the world using specialized techniques.

These days, Schmidt also does outreach in the community and around the country, and he said he only gets stung now when he’s “being lazy” by not taking precautions like wearing a bee suit when working with bees.

“I think (stinging insects) are cute and adorable and I think they are lovable if you treat them right, and by that I mean you got to look to their eyes,” Schmidt says. “You’re a great big monster … so you learn what’s scary to them and try to avoid doing that.”

That’s one of the ideas Schmidt tries to communicate in his outreach. He estimates that he does around four to six outreach events a month, which range from Skype calls to visits to elementary school classrooms to university guest lectures to discussions at conferences.

“You learn that you have to communicate,” Schmidt says. “Doing research and good work gets you nowhere if nobody knows about it.”

When he goes to these outreach events, he’s not always alone. Under a window in his wood-paneled office, Schmidt has shelves of plastic containers and jars, all with a little bit of dirt at the bottom. There live the insects Schmidt collects from the desert and brings with him to outreach events.

Schmidt has had insects in his office for the past couple decades, and over the years he’s learned the tricks of what each insect needs. For tarantulas, a dish of water every couple of weeks will do, while velvet ants need a beer bottle cap of water and a drop of honey every three days. Schmidt also had a tarantula hawk, which he planned to take on a Halloween visit to a third-grade class.

Though Schmidt often teaches people about insects, there is one bit of knowledge he offers that is particularly important about life.

“The best advice you can give is, whatever you do, love what you do,” he says.

Ava Garcia is a University of Arizona journalism student apprenticing at the Star.

It's fall, and a great time to plant some herbs! Here are some that do well in our winter, including some perennials.

Forgiveness has many layers but the greatest forgiver is God.

Composting tips for the desert

Making your own compost is a great idea, but the desert climate can pose some challenges. Here are some tips for successful composting.

The chemical is in food storage containers, shampoo, makeup, perfume and children's toys. Here are tips to reduce your exposure.

Kary Osmond: This pasta recipe needs only a few ingredients and is easy to master

If you’re looking for a pasta dish that’s comforting and easy to make, look no further.

5 things to know about Sweetest Day

Do you celebrate Sweetest Day? Here are a few things you should know about the mid-October holiday that started out as "Candy Day."

Justin Schmidt, a professor at the University of Arizona, created the Schmidt Sting Pain Index to rate the discomfort of different insect stings.

Schmidt shows off a female tarantula that is part of the insect collection he keeps in his office.

Justin Schmidt places a male tarantula into a bin after finding it in his pool. He keeps insects on hand to take to outreach events he conducts a handful of times each month.