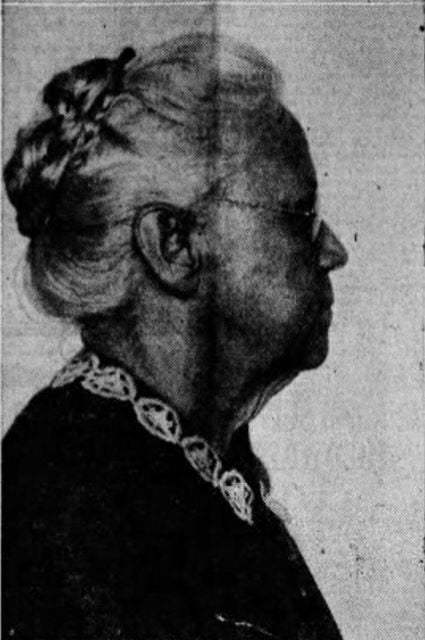 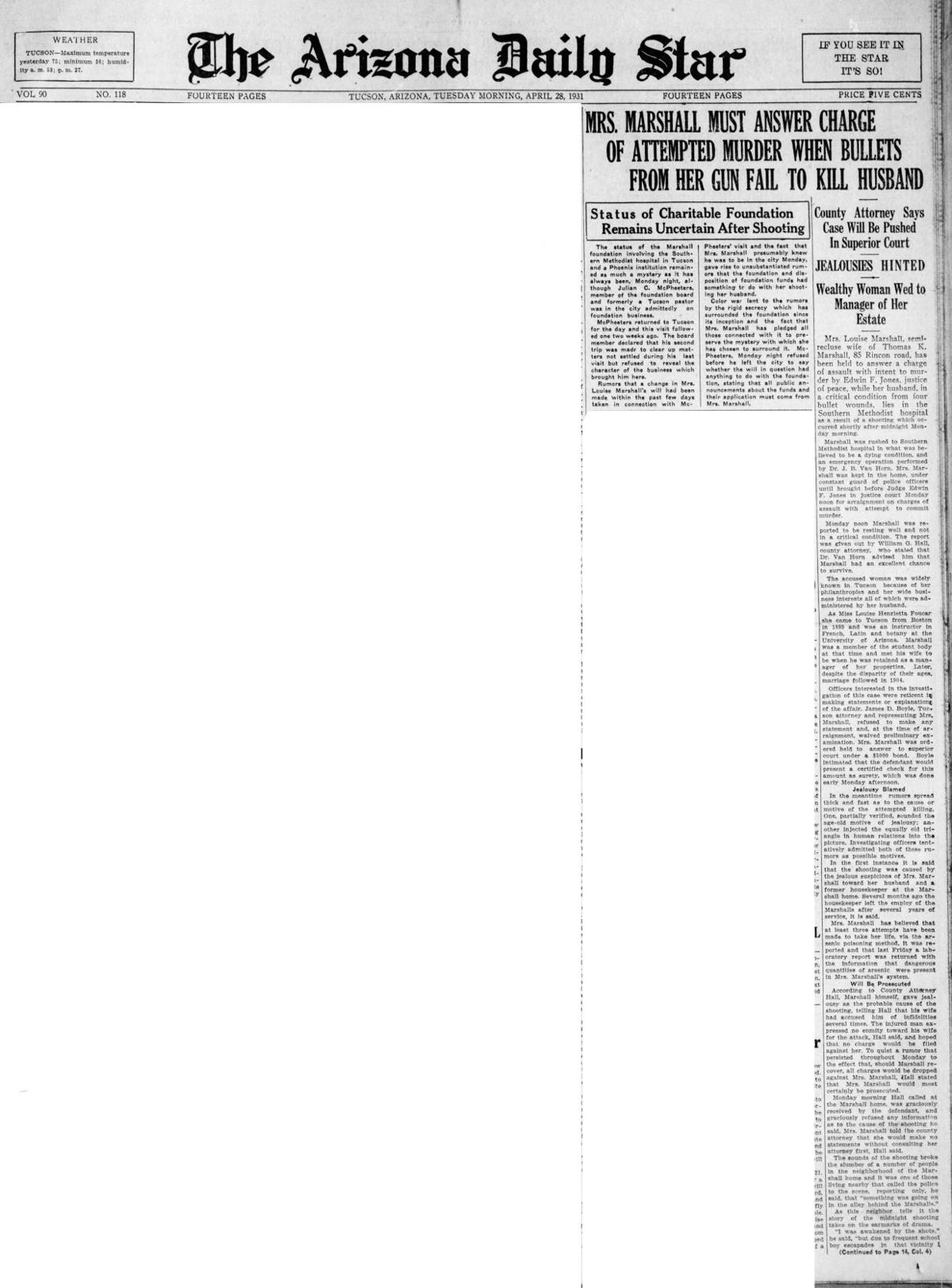 Most people around Tucson and the University of Arizona have heard of the Marshall Foundation, begun by Mrs. Louise Foucar Marshall in 1930. But in the 1930s, Mrs. Marshall was much better known for having shot her husband.

It happened April 27, 1931, 87 years ago. Tales from the Morgue presented a series about the shooting and trial of Louise Marshall. It is now an ebook, containing all of the articles on the incident.

What follows here is the first article.

MRS. MARSHALL MUST ANSWER CHARGE OF ATTEMPTED MURDER WHEN BULLETS FROM HER GUN FAIL TO KILL HUSBAND

County Attorney Says Case Will Be Pushed In Superior Court

Wealthy Woman Wed to Manager of Her Estate

Mrs. Louise Marshall, semi-recluse wife of Thomas K. Marshall, 85 Rincon road, has been held to answer a charge of assault with intent to murder by Edwin F. Jones, justice of peace, while her husband, in a critical condition from four bullet wounds, lies in the Southern Methodist hospital as a result of a shooting which occurred shortly after midnight Monday morning.

Marshall was rushed to Southern Methodist hospital in what was believed to be a dying condition, and an emergency operation performed by Dr. J. B. Van Horn. Mrs. Marshall was kept in the home, under constant guard of police officers until brought before Judge Edwin F. Jones in justice court Monday noon for arraignment on charges of assault with attempt to commit murder.

Monday noon Marshall was reported to be resting well and not in a critical condition. The report was given out by William G. Hall, county attorney, who stated that Dr. Van Horn advised him that Marshall had an excellent chance to survive.

The accused woman was widely known in Tucson because of her philanthropies and her wide business interests all of which were administered by her husband.

As Miss Louise Henrietta Foucar she came to Tucson from Boston in 1899 and was an instructor in French, Latin and botany at the University of Arizona. Marshall was a member of the student body at that time and met his wife to be when he was retained as a manager of her properties. Later, despite the disparity of their ages, marriage followed in 1904.

Officers interested in the investigation of this case were reticent in making statements or explanations of the affair. James D. Boyle, Tucson attorney and representing Mrs. Marshall, refused to make any statement and, at the time of arraignment, waived preliminary examination. Mrs. Marshall was ordered held to answer to superior court under a $5000 bond. Boyle intimated that the defendant would present a certified check for this amount as surety, which was done early Monday afternoon.

In the meantime rumors spread thick and fast as to the cause or motive of the attempted killing. One, partially verified, sounded the age-old motive of jealousy; another injected the equally old triangle in human relations into the picture. Investigating officers tentatively admitted both of these rumors as possible motives.

In the first instance it is said that the shooting was caused by the jealous suspicions of Mrs. Marshall toward her husband and a former housekeeper at the Marshall home. Several months ago the housekeeper left the employ of the Marshalls after several years of service, it is said.

Mrs. Marshall has believed that at least three attempts have been made to take her life, via the arsenic poisoning method, it was reported and that last Friday a laboratory report was returned with the information that dangerous quantities of arsenic were present in Mrs. Marshall's system.

According to County Attorney Hall, Marshall himself, gave jealousy as the probably cause of the shooting, telling Hall that his wife had accused him of infidelities several times. The injured man expressed no enmity toward his wife for the attack, Hall said, and hoped that no charge would be filed against her. To quiet a rumor that persisted throughout Monday to the effect that, should Marshall recover, all charges would be dropped against Mrs. Marshall, Hall stated that Mrs. Marshall would most certainly be prosecuted.

Monday morning Hall called at the Marshall home, was graciously received by the defendant, and graciously refused any information as to the cause of the shooting he said. Mrs. Marshall told the county attorney that she would make no statements without consulting her attorney first, Hall said.

The sounds of the shooting broke the slumber of a number of people in the neighborhood of the Marshall home and it was one of those living nearby that called the police to the scene, reporting only, he said, that "something was going on in the alley behind the Marshalls."

As this neighbor tells it the story of the midnight shooting takes on the earmarks of drama.

"I was awakened by the shots," he said, "but due to frequent school boy escapades in that vicinity I paid little attention at first, then I heard a man's cries for help.

"It was the repeated cry of 'Won't anyone help me? Don't anybody care?' that finally caused me to go to the phone and call the police. A short time afterward, while the cries still continued, I stepped outside and started toward the alleyway where it appeared the sound was coming from but was dubious about entering as I was unarmed.

"A car then turned into Rincon road and I started toward it and found it to be the police. Captain Clifford Kronauer and Chet Sherman, motorcycle officer, were in it. I went with them and showed them the Marshall alleyway and it was then that we realized the cries were coming from the inside of the house. The officers went to the door and knocked and the house, which up to that time had been dark, was immediately brilliant with lights.

"The officers entered and then one of them turned and called me in telling me to watch Mrs. Marshall for them for a moment. Mrs. Marshall was in the front room. A maid was with her. Neither woman said anything at first, Mrs. Marshall was very calm, unperturbed. The maid came to me and, motioning for me to be silent, said 'You better not get mixed into this.'

"I told her I was not there of my own accord and she returned to stand near Mrs. Marshall, who had said nothing.

"It was about 40 minutes, I should judge, from the time I first heard the cried of the wounded man until the ambulance and the doctor arrived. As soon as they did I left the house and, when they said they needed no help, I returned home.

"Aside from a few boys from a nearby fraternity house I believe I was the only one present at the Marshall home at the time. A number of other neighbors collected about the place later, but I did not return.

"Marshall, as he was carried out to the ambulance, still groaning with the pain of his wounds, begged that some one take care of Mrs. Marshall, apparently condoning her action. She, however, made no comment while I was present, maintaining a calm silence and at times apparently dazed. She did not ask regarding her husband's condition and refused to make any statement to the officers as to why she had shot him."

Johanna Eubank is an online content producer for the Arizona Daily Star and tucson.com. Contact her at jeubank@tucson.com

About Tales from the Morgue: The "morgue," is what those in the newspaper business call the archives. Before digital archives, the morgue was a room full of clippings and other files of old newspapers.

Thousands of teachers and supporters marched today to demand for more education funding.

Sierra Vista man accused of kidnapping woman, trying to set her on fire

Sierra Vista police say the woman, bound with duct tape on her feet and wrists, was able to escape from the trunk of a car when her attacker stopped to buy gas to try setting her on fire a second time.

Tales from the Morgue: More on Bonnie, Clyde and Jesse James

"Bonnie" and "Clyde," aka Elizabeth Nell Collins and Harvey D. Webb, were arrested, along with Jesse James Smith, for armed robbery.

Tales from the Morgue: He didn't know the gun was loaded

Accidental shootings happen. How often is the cry following the shooting, "I didn't know the gun was loaded!"