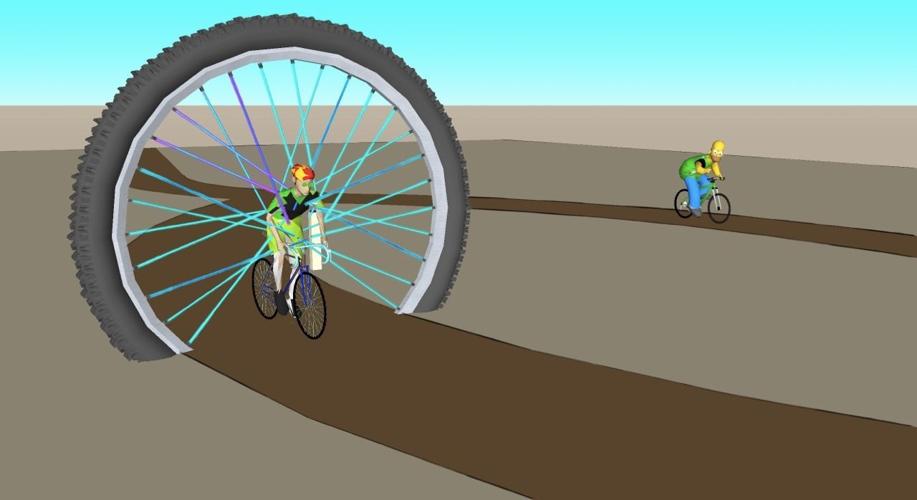 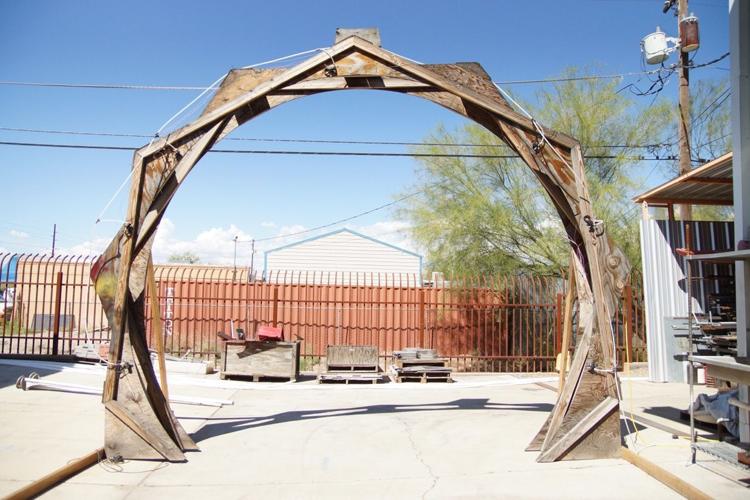 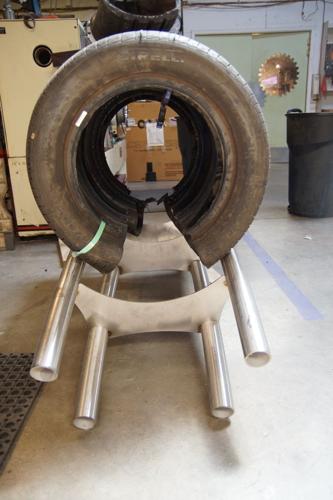 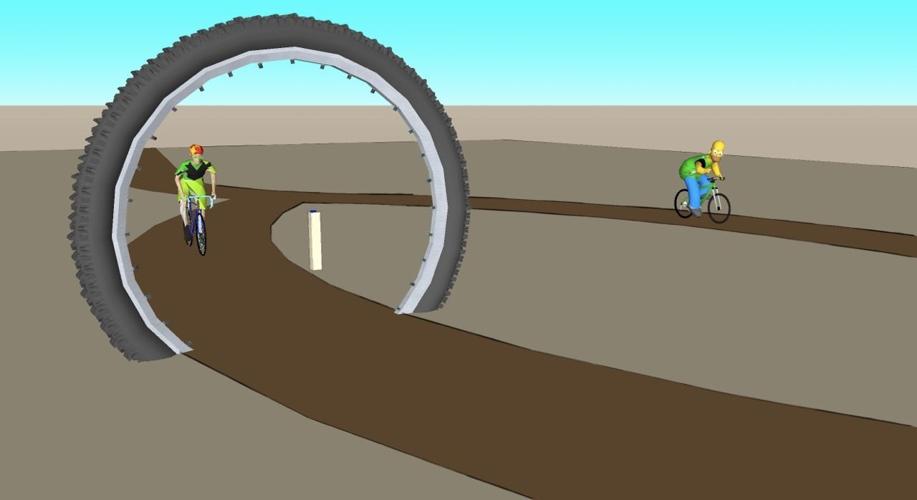 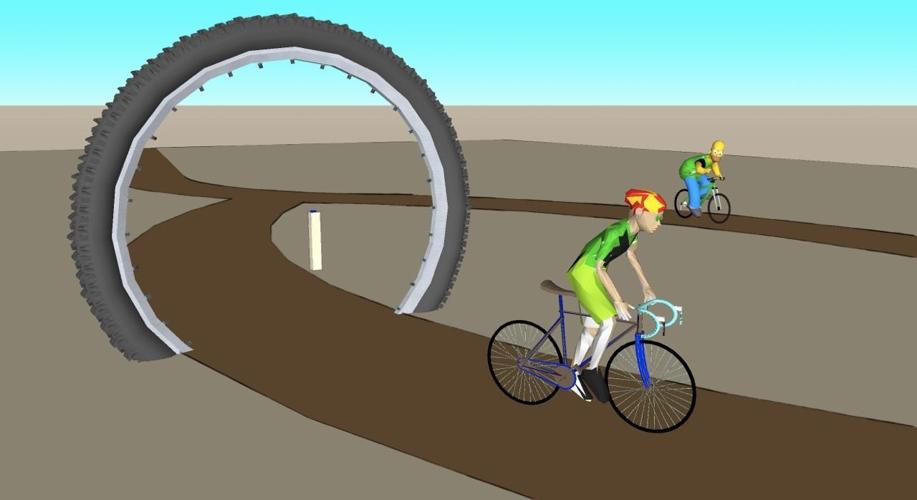 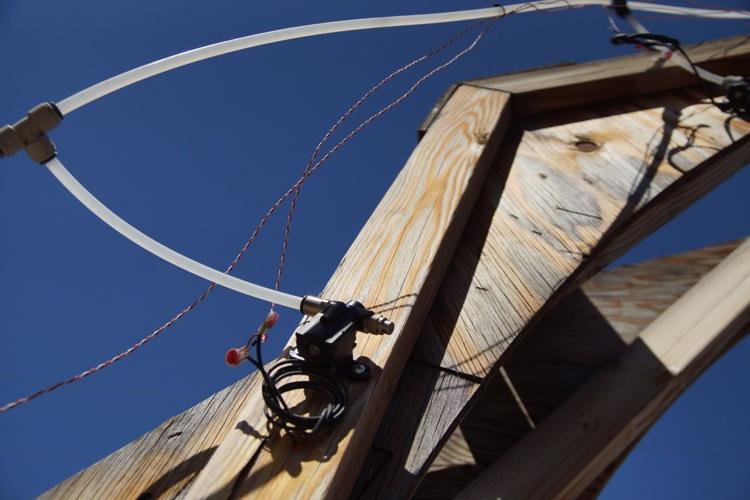 Tucson pro tip: The infamous glowing doughnut outside Tucson’s city hall changes color when you touch it, and — coming soon to downtown — a new piece of public art by the same company takes that interactivity one step further.

Joe O'Connell's newest Tucson project with his company, Creative Machines Inc., is a giant bicycle wheel that will spray water at people walking or biking through it.

“The whole idea is to get people wet,” O’Connell said in an email.

Don't worry, there will be an alternative path for those who want to stay dry. The water will only spray during the warm parts of the day, otherwise lights will flash when someone walks or bikes through.

The wheel is 16-feet in diameter and made of recycled tires donated from shops around Tucson. It will be installed along Downtown Links, north of downtown.

Downtown Links is a plan to improve roads, sidewalks and bike paths by making them more accessible to pedestrians. Some projects being worked on include: creating four vehicle lanes (with turn lanes and medians), drainage improvements and on-street bike lanes with separate multi-use paths.

The Wet Wheel was selected as one of four Downtown Links public art projects at the beginning of the first phase of construction.

One percent of city project construction budgets are used for public art, according to project manager Tom Fisher.

O’Connell is being commissioned for $100,000 to build the Wet Wheel. That commission comes out of the public art budget from the city.

Mary Ellen Wooten, the public art program manager of Tucson Pima Arts Council, said the public art is important because it adds value and interest in our community.

“Arts and culture are elements of an economy that help with health and vibrancy,” Wooten said. “It’s good to be competitive with other up-and-coming communities that are looking for young talent.”

The selection of art pieces is made by the Public Art Panel — made up of residents and local artists. Wooten facilitates the meetings.

O’Connell founded Creative Machines Inc. in 1995. It specializes in exhibition design and sculptures all over the world. In Malaysia, they constructed a walk-on piano for a music exhibit. The white keys light up and play the note when stepped on, much like the toy store scene in the movie “Big.”

There are seven sculptures by Creative Machines Inc. around Tucson, including the glowing donut (officially named the Desert O). The Bike Church, located on Granada Avenue, is exactly what it sounds like, a structure made from bicycle parts that borrows from different faiths.

Not far from the Bike Church is Wandering Stars at Granada Avenue and Cushing Street. Next to the streetcar stop are triangular lights that interact by blending into a wave of new colors.

Cocoon, located along Houghton Road, is a large sculpture along a bike path. By day it looks like a metal cocoon, but by night lights reflect on the stainless steel making it look luminous.

In a park on 25th Street and 9th Avenue is a small light-up drum. Public Drums plays music and lights up when touched and was encouraged by members of the neighborhood through the TPAC. O’Connell visited the park many times and made the interactive drum to inspire positive and fun communication between children and adults in part.

Outside the Wheeler Taft Abbett Sr. Library in Marana, Wondrous is a standing fixture made of words from the library’s collection. At night, six lights cast through the sculpture, making the words overlap in different colors.

Toby the Griffin, the red mythical creature it’s named after, sits on Scott Avenue behind the Children’s Museum.

“Tucson was a great city to get started in because it was possible to start without an existing portfolio and the sculptures were close so I could try some new things,” said O’Connell who is originally from New Jersey.

With a group of 15 full-time employees, the company is working on new ways to visualize learning experiences in museum exhibits. They do this by making interactive exhibits to showcase how things work. For example, the Air Rockets exhibit installed in multiple locations shows how much pressure is needed for a rocket to take off. Someone can press a button to fill the rocket with a certain amount of pressure and then hit another button to launch it.

“[The sculptures are] catalysts for human interaction more than they are objects themselves,” O’Connell said. “So the real measure is how do they create interesting human experiences.”

The Wet Wheel will be installed at the end of Phase 3 of Downtown Links — scheduled to begin in early 2016.

The company designs and makes sculptures — including notable public art in Tucson — and museum exhibits.