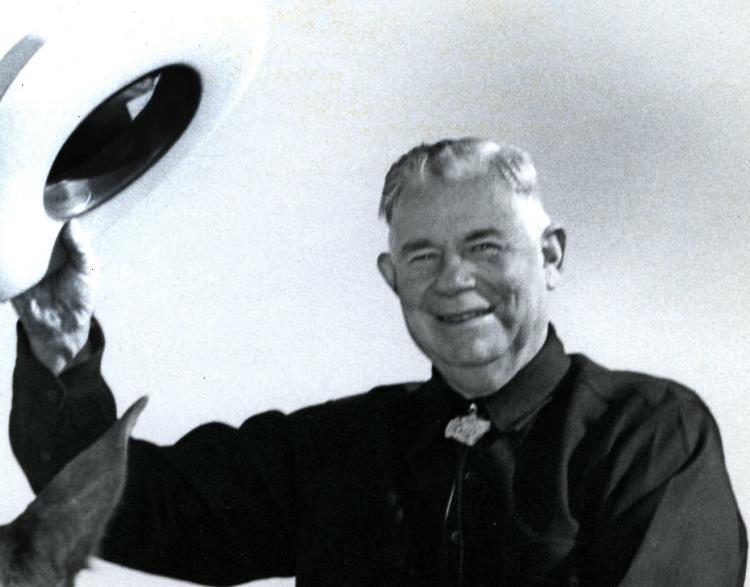 Compressed night panorama of the Ernest W. McFarland and the American Dream Memorial at the Arizona Capitol in Phoenix.

Few know of Arizona’s “Father of the GI Bill,” Ernest W. McFarland, and his fight to add the provisions to give educational and home- and business-loan benefits to veterans.

McFarland, known as Mac, began life in his adoptive Arizona as a farmer to later rise to the ranks of U.S. senator, U.S. Senate majority leader, governor and chief justice of the Arizona Supreme Court. He is the only Arizonan to serve in the highest office in all three branches of Arizona government, two at the state level, one at the federal.

In addition to his work on the GI Bill, McFarland sponsored 40 bills to benefit veterans and fought equally hard for Arizona’s water rights. He was instrumental in the development of the Central Arizona Project, a portion of which still bears his name, and is credited with creating the Arizona State Parks System.

While McFarland deserves to be recognized for his unique role in Arizona history, it was his pursuit of what would become the GI Bill that may have made the most lasting impact on post-World War II America.

McFarland had seen firsthand WWI veterans returning home to rampant unemployment and long soup kitchen lines. McFarland knew that without government intervention, there would be 16 million returning WWII vets without educational and housing opportunities, which could have led the country into economic depression.

Working with both houses of Congress to incorporate the two bills, McFarland and Atherton worked to promote what became the Servicemen’s Readjustment Act of 1944.

The Senate and the House of Representatives approved the legislation on June 22, 1944, and President Franklin D. Roosevelt signed what is now known as the GI Bill of Rights, or GI Bill, into law.

For his efforts, McFarland is considered, with Atherton, a father of the GI Bill — considered by many to be one of the most successful pieces of social legislation ever written.

The impact of the bill was far-reaching.

Millions of returning veterans also took advantage of the GI Bill’s home-loan guaranty. From 1944 to 1952, the VA backed an estimated 2.4 million loans.

McFarland was honored this past March 30 in Florence, where he began his political career. “The Celebration of the 75th Anniversary of the GI Bill and Ernest McFarland” featured a parade and tributes from the American Legion, representatives from Arizona Gov. Doug Ducey’s office and other dignitaries.

No one at the time of the original bill could have imagined how McFarland’s foresight would end up impacting the nation’s veterans, educational system and workforce for generations to come.

The historic park consists of a preserved courthouse and other buildings dating to the Arizona Territory. The courthouse is on the National Register of Historic Places. azstateparks.com/mcfarland

Ernest McFarland and the American Dream

A memorial was dedicated to Ernest W. McFarland and the American Dream at Wesley Bolin Plaza in Phoenix on Arizona Statehood Day, Feb. 14, 2015.

According to McFarland’s grandson, Chandler resident John D. Lewis: “This memorial is not only dedicated to my grandfather, a down-to-earth man who really wouldn’t have wanted a memorial, but is meant to honor all Americans and the opportunities that Mac hoped to provide to them.”

The previous memorial, dedicated in 1998, fell into disrepair and was replaced by the new memorial that includes a spiral path, flanked by panels describing McFarland’s life and accomplishments. The focal point of the neoclassical design is a 24-foot triumphal arch representing the “Gateway to Opportunity” that McFarland provided for many Americans.

Lewis and other McFarland grandchildren raised the money to pay for the new memorial so that no taxpayer funds would be required.

“Many will have given the best years of their lives. They have left good homes to fight beasts on the other side under the most trying conditions. Their mental and physical strength has been taxed to the uttermost. We cannot expect them to return and take up where they left off — whether it was at school or at work.”

Ernest W. McFarland introducing the amendment to the GI Bill that included the educational and loan provisions while addressing the U.S. Senate on Jan. 28, 1944.

Voters can change their party affiliation through Feb. 18 to be eligible to vote.

Construction crews will start soon on a nearly two-year project for two miles of East Broadway. The busy Tucson boulevard will be widened to six lanes between North Euclid Avenue and North Country Club Road.

Being smarter in 2020: How to report potholes, other nuisances

Are you tired of that pothole you just can’t avoid? Are you wondering why it hasn’t been filled?

Compressed night panorama of the Ernest W. McFarland and the American Dream Memorial at the Arizona Capitol in Phoenix.