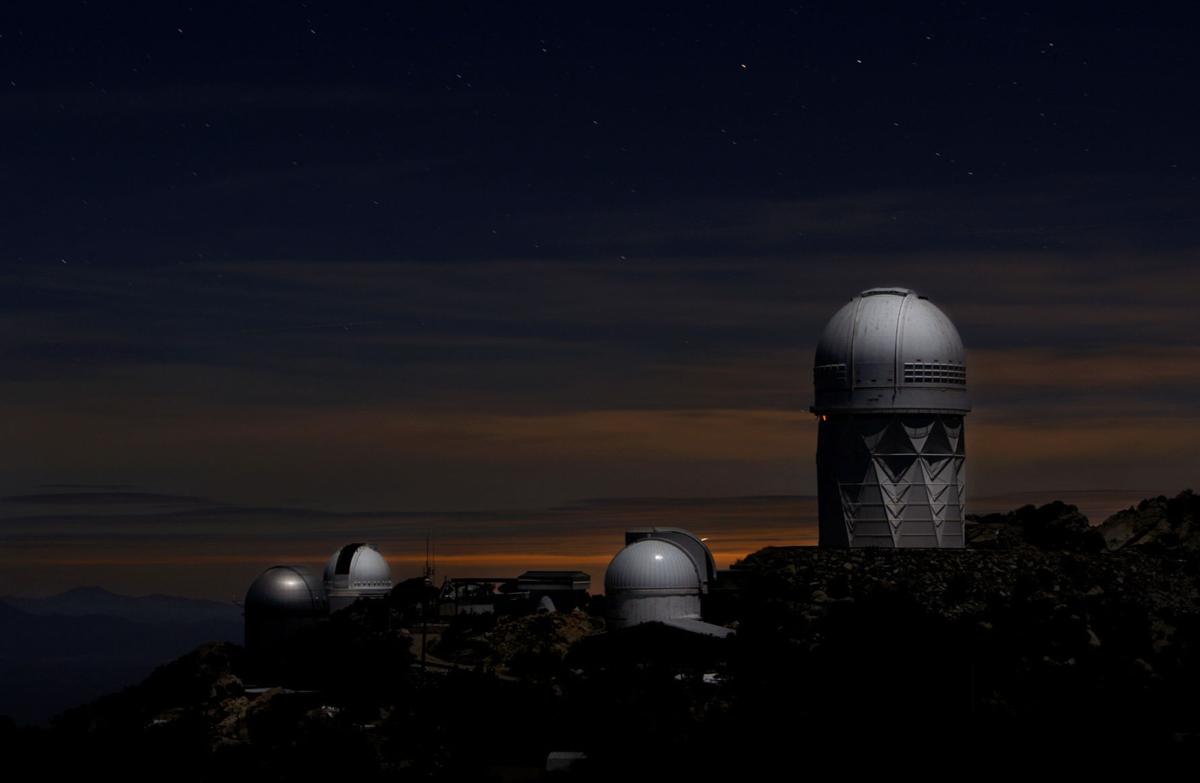 The 4-meter Mayall, right, will be turned into a 5,000-fiber spectroscope to gather data on early galaxies and explore the mysteries of dark energy and matter. 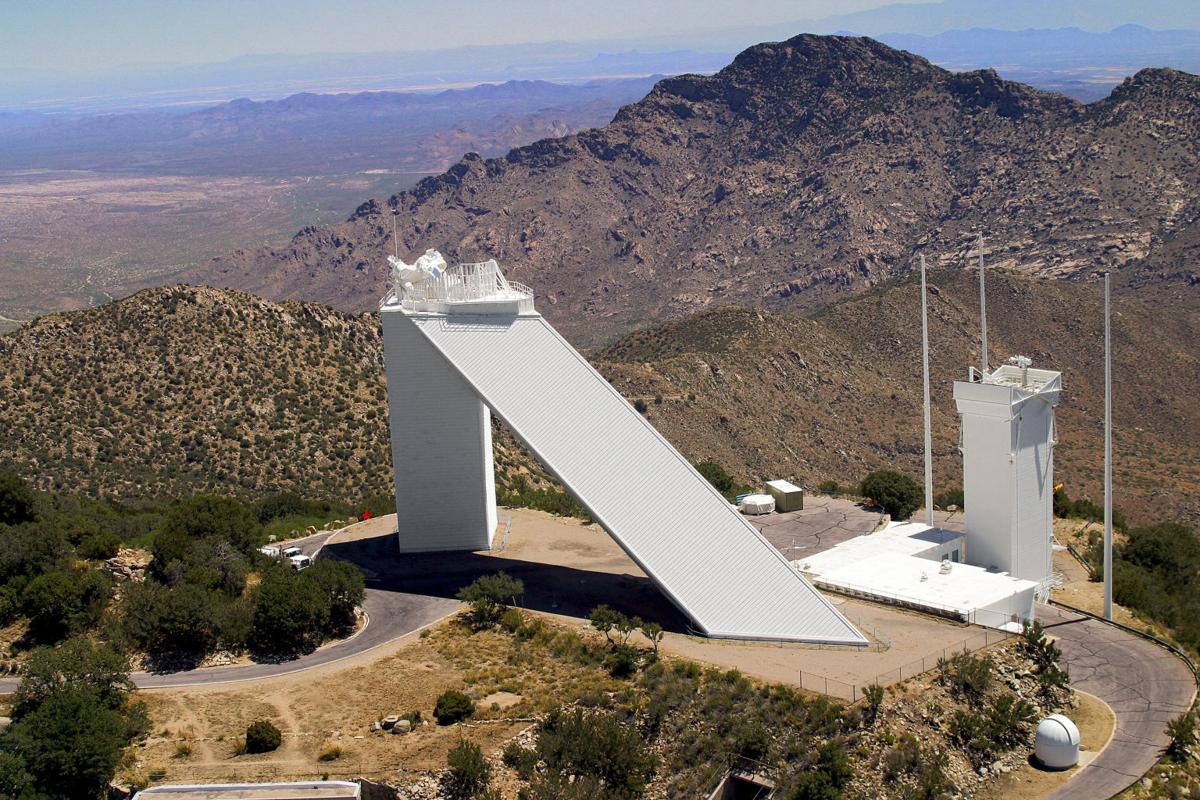 Kitt Peak has now found new uses for all of the optical telescopes orphaned by the National Science Foundation when it announced defunding in 2012.

The smallest orphan, the 2.1-meter telescope, is expected to be fitted with a robotic adaptive-optics imager developed by Caltech and scientists in India.

The largest, the behemoth 4-meter Mayall, just won approval from the Department of Energy for a long-anticipated plan to turn it into a 5,000-fiber spectroscope, capable of collecting scads of data on early galaxies and plumbing the mysteries of dark energy and matter.

The downside is that the “national observatory” will have very little time left on its telescopes for competitive projects from the astronomical community — the purpose for which Kitt Peak was built in the 1960s.

The fate of the McMath-Pierce Solar Telescope, meanwhile, remains uncertain as the National Science Foundation redirects its solar astronomy funding to a new-generation telescope in Hawaii.

NSF support of the telescope, through the National Solar Observatory, runs out at the end of 2016.

“It’s a pretty good landing from where we were a few years ago,” said Robert Blum, deputy director of Tucson-based National Optical Astronomy Observatory, which operates the telescopes on behalf of NSF.

In addition to the Mayall and the 2.1-meter telescope, NOAO is also a partner in the WIYN 3.5-meter telescope on the mountain. Its share in that facility has been taken on by NASA, which plans to install a new instrument that will be used in follow-up studies of exoplanets found by its space telescopes.

Approval of a funding and construction schedule for the Dark Energy Spectroscopic Instrument (DESI) on the Mayall Telescope was announced Monday by the U.S. Department of Energy, which is providing much of the $50 million cost of building it.

It is scheduled to be operating by the end of 2019.

A team of more than 200 physicists and astronomers, based at the U.S. Department of Energy’s Lawrence Berkeley National Laboratory, will use data from DESI to create the largest three-dimensional map of the universe ever made.

DESI is a 5-ton instrument that can simultaneously collect light from 5,000 galaxies and quasars through optical fibers positioned by tiny robot arms.

Measuring spectra (the rainbow of colors in light), it can determine the distances in space of those objects. “It will gather more spectra in one survey than has been gathered by all previous surveys combined,” Blum said.

Mayall was built in the early 1970s “like a battleship,” Natalie Roe of Berkeley Labs said in a news release. With a moving weight of 375 tons, it can easily support 5-ton DESI. “The DESI spectrometer will update this old battleship to world-leading capability,” the news release said.

The smaller, 2.1-meter telescope will be robotically operated. Robo-AO was developed by astronomers at the California Institute of Technology (Caltech) and the Inter-University Centre for Astronomy and Astrophysics in Pune, India, according to an NOAO newsletter.

Kitt Peak Director Lori Allen said she could not talk about the Robo-AO project until Caltech finalizes the project and issues a news release on it, but she and Caltech’s Reed Riddle described the project in NOAO’s September newsletter as “the only autonomous laser guide star adaptive optics (AO) instrument.”

Adaptive optics measures and adjusts for the blurring that all ground-based telescopes encounter because of Earth’s atmosphere. A laser is used to project an “artificial star” to make those measurements.

Robo-AO has demonstrated its ability to provide atmosphere-corrected images in both visible and infrared light during a three-year trial at a 1.5-meter telescope at Caltech’s Palomar Observatory near San Diego, according to the newsletter.

At Kitt Peak, Robo-AO will have a larger mirror, clearer skies and more nights on sky.

The newsletter article also says one-sixth of Robo-AO’s time will be given over to competitive proposals from the astronomical community.

Before defunding, the 2.1-meter telescope on Kitt Peak was given fully to community time. That was also the original role of Mayall.

NOAO Director David Silva said projects such as the Mayall conversion mark a shift for NOAO and astronomy in general. Instead of providing telescope time for individual projects, Mayall will now provide vast amounts of data for researchers to mine.

“This is not just us. This is astronomy everywhere,” Allen said. “One can argue that we are serving a larger community than we have in the past.”

The 4-meter Mayall, right, will be turned into a 5,000-fiber spectroscope to gather data on early galaxies and explore the mysteries of dark energy and matter.