Former Biospherians Jane Poynter and Taber MacCallum have left their posts with Paragon Space Development Corporation to pursue a space tourism business that will lift paying guests into the stratosphere with an enormous helium-filled balloon.

Paragon announced the departure of two of its founders last week, just days after the new company, World View, had demonstrated its technology by lifting a space-suited adventurer, Google executive Alan Eustace, 25 miles above the Earth’s surface for the longest sky dive ever made.

Poynter was president of the company and MacCallum was CEO. Grant Anderson, former chief operating officer at Paragon, has assumed both those titles.

World View was developed at Paragon and the two companies have a continuing business relationship, said Anderson.

MacCallum said World View is raising capital for its plans by attracting investors and selling seats on the 8-seated capsule that will float passengers into the stratosphere with a helium balloon and glide back to Earth on a “parawing” after a 2-hour tour of near space.

MacCallum said the first investment rounds have gone well and the venture has sold out “several” flights in advance.

Asked to define “several,” MacCallum said it was more than three and less than seven.

Seats in the World View capsule will cost in the neighborhood of $75,000. Refreshments will be included in the price.

Paragon, meanwhile, will focus on its core mission of providing life-support systems and thermal controls for use in extreme environments for NASA, the Department of Defense and private companies, said newly elected Board Chairman Ron Sable.

“Jane and Taber got this idea, which the board endorsed, to see if we could spin off an operation with space tourism,” Sable said. “I regret having them leave because they have such talent.”

MacCallum, reached by telephone in Roswell, New Mexico, where he is still packing up equipment from the Oct. 24 record-breaking sky dive, said he and his wife decided it was time to concentrate on the new business.

MacCallum and Poynter, two of the five founders of the company 21 years ago, remain invested in Paragon and Poynter will remain on the board.

“That was our choice,” said Sable. “We asked her to stay and she agreed.”

The two companies remain “very, very closely associated,” Sable said. “We do things they need and we work together with them.”

Anderson, the new president and CEO of the company, was one of the firm’s founders and was its chief operating officer and vice president of engineering.

He was never the public face of Paragon — that role was played by Poynter and MacCallum, whose celebrity stemmed from their Biosphere 2 days and from announcements of aspirational goals, such as a flight around past Mars together in a private space craft.

“I was like Scotty in the engine room,” said Anderson.

Paragon routinely tops the list of Tucson companies with NASA contracts. Its direct government awards, from NASA and the Department of Defense, first topped $500,000 in 2006 and grew to $2.7 million in the 2014 fiscal year.

Overall revenues, which include subcontracts with government vendors and contract with private companies, are much larger than that, said Anderson, though he declined to reveal them.

When Paragon last appeared on the Inc. Magazine list of 5,000 fastest-growing private companies in 2012, its revenues were estimated at $12 million.

Sable said he expects private space businesses to thrive, despite two recent catastrophes — the explosion of Orbital Sciences Antares rocket on Oct. 28 and the crash of Virgin Galactic’s SpaceShipTwo rocket plane on Oct. 31.

“It’s the nature of the beast. There is risk involved,” Sable said.

“Our heart goes out to those guys,” MacCallum said. “We always knew that at some point something was going to happen, but Virgin’s going to get by this.”

The mishaps are a reminder to everyone involved in space travel to redouble their efforts at safety, MacCallum said.

He called Eustace’s sky dive an example of what can be done, safely, with a small team. “It was a safety culture that was just amazing.”

MacCallum said World View, which has acquired the technology used in that dive, hopes to offer its first capsule flights by the end of 2016, but calls that a “sporting goal.”

He and Poynter teamed with Anderson to create Paragon in 1993, shortly after they emerged from a two-year experiment in living inside a totally enclosed system at Biosphere 2. They married nine months after emerging.

He said he and Poynter are “serial entrepreneurs” who want to fully embrace this latest venture.

They have abandoned another one that made headlines last year — a plan hatched with space tourist Dennis Tito for a 501-day orbit of Mars in a private space vehicle in 2018.

MacCallum said that group, known as “Inspiration Mars,” decided a mission of that scale was not feasible without NASA involvement. 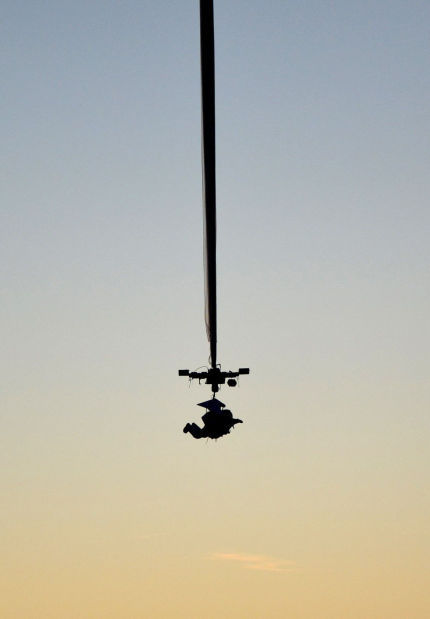 Alan Eustace is carried aloft outside Roswell, N.M., on Oct. 24 before making his 25-mile sky dive back to the ground. ﻿ 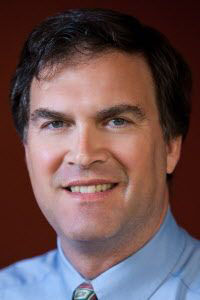 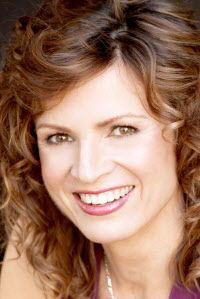 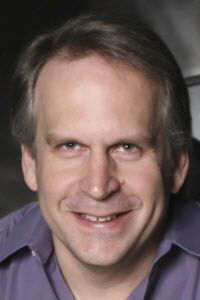