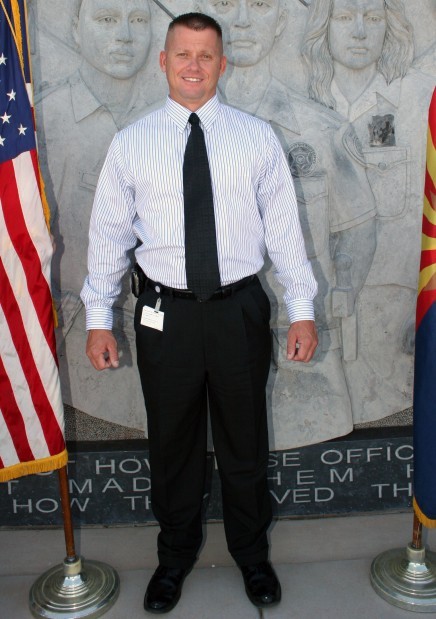 Lt. Tami Villar, who grew up on Tucson's far northwest side, is taking over the Pinal County Sheriff's Office's community relations section after serving about 18 months as the department's chief spokeswoman.
Tim Steller

Villar told me she is being put in charge of community relations, an assignment that covers a variety of functions: the reserve program, victim's services, mounted unit, volunteer services and others.  including the department's reserve program. Her ideal assignment, if she had to leave the public information job, would have been a return to criminal investigations, said Villar, who is from the northwestern reaches of the Tucson metro area in Pinal County.

Tim Gaffney has been the department's grants administrator but is an experienced police spokesman, having spent years in the job for the Mesa Police Department. He spent 16 years as an officer in that department before leaving with a medical retirement, for an injury he received on the job, Gaffney told me. In 2006, he went on to work for the Governor's Office of Highway Safety, under current Tucson City Councilman Richard Fimbres, before moving on to Pinal County.

Gaffney appears to be in political alignment with the politically active sheriff. Until recent weeks, Gaffney served as a volunteer communications director for Treasurer Dean Martin's campaign for the Republican nomination for governor. Babeu has endorsed Martin, but most famously appeared in a John McCain ad

The re-assignment comes as Babeu sustains a high media profile, going on frequent TV and radio interviews to discuss border issues. In recent weeks he has been handling the fallout from the April 30 shooting of Deputy Louis Puroll, allegedly by smugglers. Paul Rubin of the Phoenix New Times has repeatedly raised doubts about the sheriff's department's version of events, and Babeu's office has held two press conferences, one of them at 9 p.m., bolstering their version of the shooting.

In recent weeks, Gaffney also responded critically to a story Brady McCombs and I wrote about Babeu, calling it a "hit piece."

Lt. Tami Villar, who grew up on Tucson's far northwest side, is taking over the Pinal County Sheriff's Office's community relations section after serving about 18 months as the department's chief spokeswoman.
© Copyright 2021 Arizona Daily Star, PO Box 26887 Tucson, AZ | Terms of Use | Privacy Policy
Powered by BLOX Content Management System from TownNews.com.
You don't have any notifications.