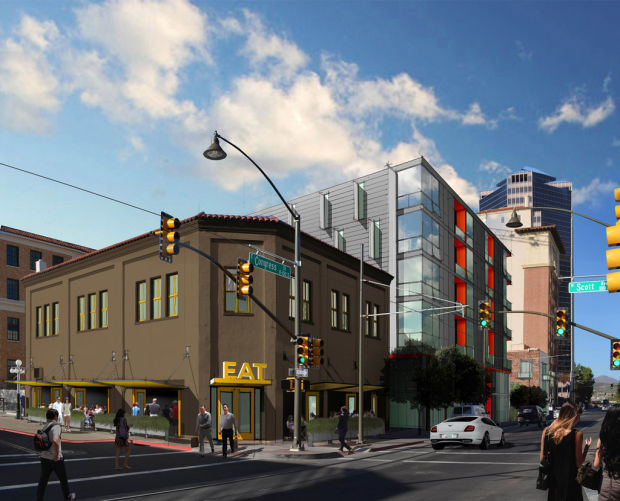 The historic Indian Trading Post, foreground, would be opened up and stripped back to its structural core to maximize its connection to East Congress Street. Next door, historically inspired awnings and panels would shade the older structure and The Post building. 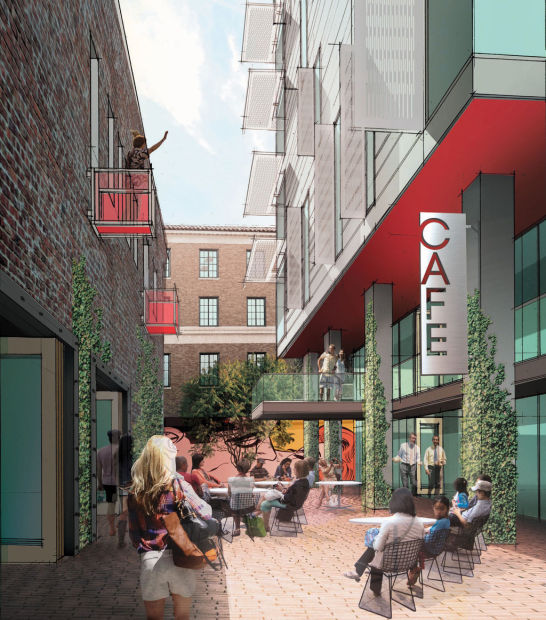 This design gives enough room between the new and old buildings to create a shared courtyard.

A controversial dirt lot in downtown Tucson could finally see some long-anticipated construction now that lawsuits among the developer, city and Rio Nuevo Board are settled.

Turning those plans into reality could take as much as four years under the terms of a deal Bourn worked out with Rio Nuevo and the city.

At the heart of Bourn’s planned project is a five-story mixed-use development named The Post.

The building would entail four floors of up to 44 residential units and a street-level floor designed for retail shops and restaurants.

Bourn’s plans also call for renovating the historic Indian Trading Post and the annex building of the old Valley National Bank (now used by Chase bank), which flank the east and west sides of the proposed new development. Those would be turned into office and commercial spaces.

Architect Rob Paulus, who designed the project, said the idea was to fuse the old with the modern, similar to what he says is cropping up across Europe.

Courtyards, parking and other open spaces would surround the new building to attract revelers from the east end of Congress Street, with its Hotel Congress, Rialto Theatre and student housing activity.

“With all the energy on the east end, obviously it can move to the west and be a part of this project,” Paulus said.

Bourn expects the property will carry a $20 million price tag, of which he has already spent more than $5 million in designs, acquisitions and more.

Although the project is in the early stages, Bourn expects to begin construction within the year.

Bourn has been the target of frequent criticism over the years for failing to build anything on the site, which he received for a pittance.

About eight years ago, the district spent $900,000 demolishing buildings — including the 100-year-old Pusch Building — along East Congress between South Scott and Stone.

Bourn received the land for $100 as part of a deal for him to build condos and retail on the property.

The project never materialized for a number of reasons.

First, Bourn said, the initial plans fell through after the economy tanked and the lender pulled its loan.

After that came a lawsuit from taxpayer advocate John Kromko in February 2011 and subsequent countersuits from Rio Nuevo to retake possession of the property.

Legal issues placed the site in limbo for almost three years and cost Bourn about $800,000.

But last month, the city finalized a legal settlement which gave Bourn up to four years to build or the property would revert to Rio Nuevo’s possession.

Bourn said he didn’t want to waste any time and started working with Paulus on the current designs about a month ago after he felt a final deal was imminent.

“I’m a big believer there’s a pendulum. We’ve all had a lot of negative publicity about this. If we start showing some good things, then we’re going to have a lot of positive publicity,” Bourn said. “I wanted to get on with this.”

Rio Nuevo chairman Fletcher McCusker said he was surprised Bourn acted so quickly since the ink was barely dry on the legal settlement.

“He’s really been stuck because part of the suit was that (Rio Nuevo) foreclosed on him and he couldn’t do anything with the property,” McCusker said. “He’s fully engaged and we saw that today. Just conceptually, where they are is really brilliant.”

Bourn said he’s tired of being a “whipping boy” in the media so he wanted to put his “own feet to the fire” to get the project completed.

“I want to dispel the comments about the charade that we’ve all been playing on this project,” Bourn said. “I don’t think there’s many people that would have put the kind of money into this project that we put into it. So we’re committed to downtown. We’re committed to Tucson.”

Plan would create a food-court style retail space with bowling alley on second of five floors.

The historic Indian Trading Post, foreground, would be opened up and stripped back to its structural core to maximize its connection to East Congress Street. Next door, historically inspired awnings and panels would shade the older structure and The Post building.

This design gives enough room between the new and old buildings to create a shared courtyard.