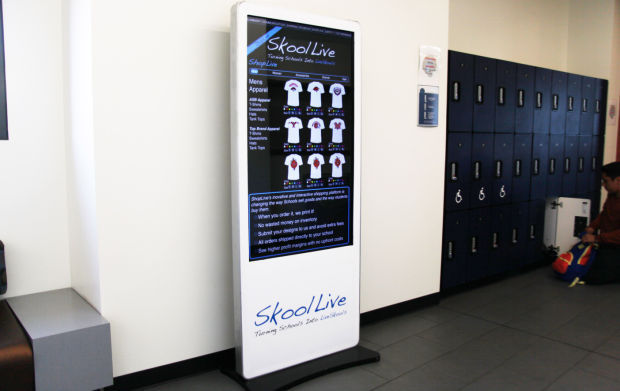 SkoolLive digital kiosks can have both local and national advertising. 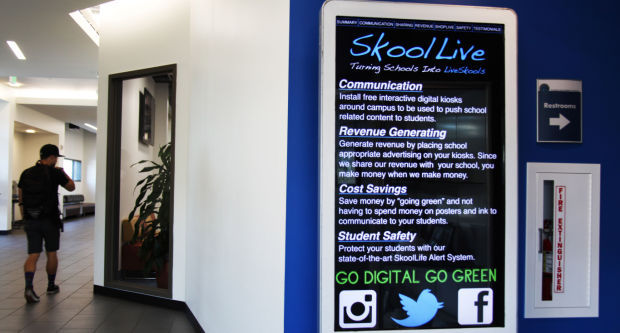 SkoolLive digital kiosks are used to display school content like bell schedules and event promotions as well as advertising.

Students in two Southern Arizona school districts will soon be sharing the hallways with digital billboards that resemble jumbo-sized iPods.

The person-sized touch screens will allow schools to display their own content, such as photos, event announcements and schedules.

But that school content will share space with advertising sold by SkoolLive LLC. The California company is installing the screens in Vail and Sunnyside district schools for free next month, in return for being able to sell ads.

The boards are expected to bring in up to $300 a month each, with the money, at least initially, going to the school’s student councils.

The Sunnyside and Vail governing boards, which approved contracts with SkoolLive late last year, will ultimately have final approval over any advertising placed on the screens.

Ads for tobacco, or that are politically incorrect, sexually explicit or obscene are prohibited.

Vail will pilot kiosks in two high schools, Cienega and Empire. Each school will have 10 kiosks for a minimum of 12 months. They can opt out at that time. Otherwise, the full contract term is three years.

Sunnyside plans to roll out the kiosks in every school. But elementary schools will only have one kiosk while the high schools will have about 10, said spokeswoman Mary Veres.

Kuhn said they will be the first schools in Arizona to receive their kiosks, but the company has also signed deals to expand into schools in Phoenix and Scottsdale, and to Marana’s Mountain View High School.

School leaders hope the touch screens are a better way to communicate with students.

In addition to the ads, the screens can display schedules, promote events, show video and sell merchandise from the school bookstore.

“We are in a digital age now, almost every student has a smartphone or an iPad or a tablet,” Kuhn said. “So when you put a kiosk on campus it’s something they can relate to more.”

SkoolLive started as an event and media company dedicated to connecting “positive, pro-social consumer brands” to school campuses, Kuhn said. He listed Subway, Disney and local “mom and pop” shops as examples of partners the company works with.

The organization now has agreements with more than 2,000 schools in 27 states and intends to triple that number in 2015, Kuhn said.

One way the company has grown their customer base is by promoting themselves at educational conferences such as one in Phoenix last year, where they caught the eye of Vail students, who pitched the idea to school officials.

“What was appealing about it was the fact that it was something new,” said Kate Rottler, vice president of the senior class student council at Cienega High School. “It’s modern and it is a way to connect with the teachers.”

Students were also attracted to the kiosk’s money-making potential. Rottler said the student council plans to let school clubs collect the profit from the kiosks on alternating months.

She’s not worried about the increase of advertisements in school.

“I think that’s beneficial, so they (students) can see what’s new what’s around them,” Rottler said. “It’s a way to be more in the loop with society and stay connected.”

School officials do care about what’s displayed, which is why district approval of all outside advertising is part of both contracts.

“If it’s something we felt was against our philosophy then we would say no to that,”Kaiser said.

Still, some argue that regardless of what product is being promoted, advertisements in schools detract from students’ education, in part, because a company’s bottom line to is make a profit.

“The child market is valuable because they have money, influence over parent’s spending. They can become consumers for life,” said Faith Boninger, a research associate at the National Education Policy Center, an education research group based at the University of Colorado at Boulder.

She said even if advertisements don’t promote unhealthy products, they can discourage critical thinking.

“If you’re a kid and you’re in school and you see an ad for something you have to figure that your teacher approves or the schools approves,” Boniger said. “That’s logical.”

Advertising in schools is nothing new, but the practice has drawn attention in the last few years as schools seek new ways to make up for shrinking budgets.

Scottsdale Unified School District sells advertisements on their school buses, and other schools have placed ads in school report cards and on lockers.

Vail School District already sells sponsorships to support their school sports teams, but this will be the first time they open their campus to national advertisers by way of the kiosks.

“It’s a new company for us, but we’re pretty confident that once we get things up and running it will be really beneficial,” Kaiser said.

Revenue from the agreement will depend on advertiser interest.

The Vail contract promises the district 20 percent of the profit. SkoolLive doesn’t guarantee any revenue, but estimates schools could earn about $300 a month per kiosk.

Proposal would allow electronic billboards in another part of Arizona

A Lake Havasu City Republican lawmaker wants to open his section of the state to electronic billboards.

The measure has statewide implications for the future, although it is focused for now on northwest Arizona billboards.

SkoolLive digital kiosks can have both local and national advertising.

SkoolLive digital kiosks are used to display school content like bell schedules and event promotions as well as advertising.