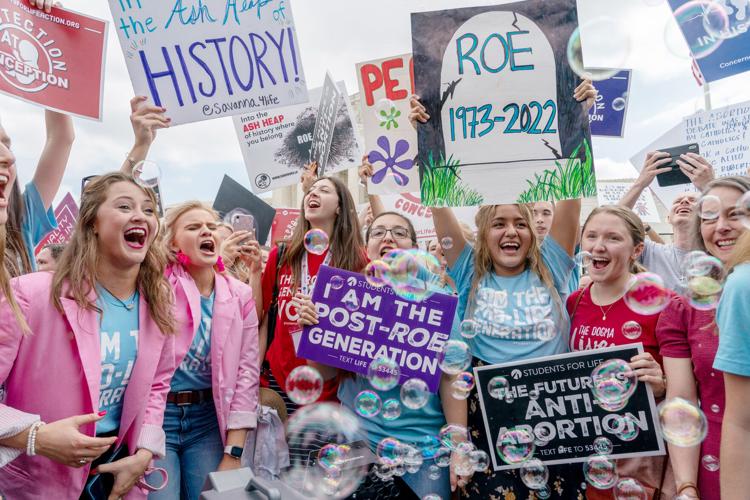 Anti-abortion protesters celebrate following the Supreme Court's decision to overturn Roe v. Wade in Washington on Friday. The decision ended constitutional protections for abortion that had been in place nearly 50 years. 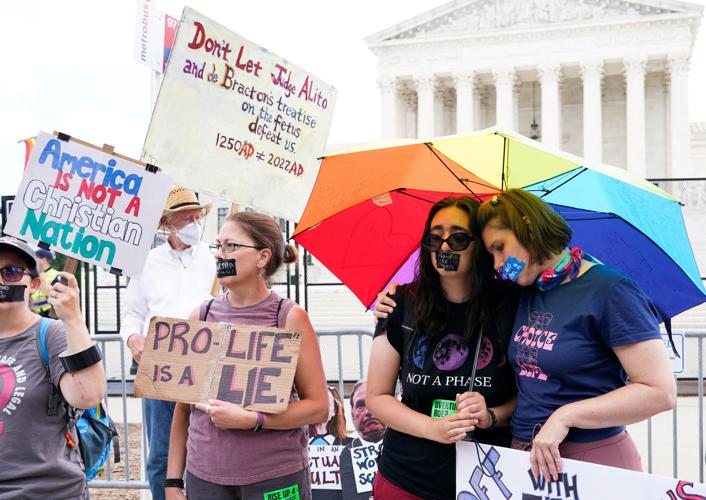 Abortion rights activists react outside the Supreme Court on Friday. The Supreme Court ended constitutional protections for abortion in a decision by its conservative majority to overturn Roe v. Wade. 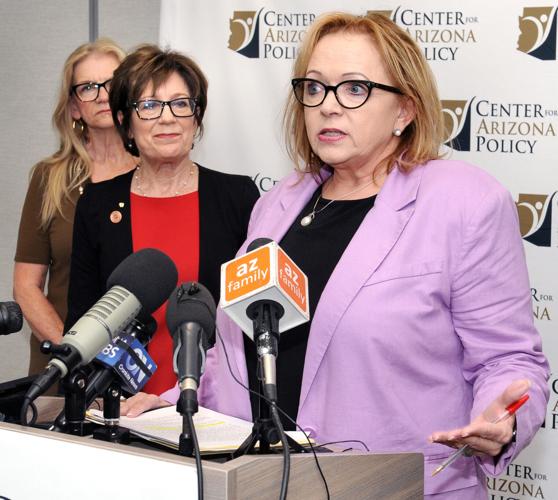 Cathi Herrod, president of the Center for Arizona Policy, details how Friday's Supreme Court ruling allows the state to once again enforce its pre-1973 law making abortion a crime. With her is Sen. Nancy Barto who has authored many abortion restrictions including a new 15-week ban.

PHOENIX — Women in the United States have no constitutional right to terminate a pregnancy, the U.S. Supreme Court ruled Friday, bringing an immediate — if not permanent — end to legal abortion in Arizona.

In an extensive opinion, Justice Samuel Alito, writing for the majority, said the historic 1973 Roe v. Wade decision was built on the premise there is an inherent right of privacy in the U.S. Constitution that precludes states from criminalizing a woman's decision to abort a fetus and a medical provider's actions to help her. But he said there was — and is — no basis for that conclusion.

"The Constitution does not prohibit the citizens of each state from regulating or prohibiting abortion,'' he continued, a right that Roe and subsequent rulings from the court took from them. "We now overrule those decisions and return that authority to the people and their elected representatives.''

The move resulted in Planned Parenthood Arizona on Friday halting all abortion services.

"We are working diligently with our team of attorneys to understand Arizona's tangled web of conflicting laws so we can ensure our patients know what their rights are and how to access legal abortion,'' said Brittany Fonteno, the organization's president and CEO. And, for the moment, she said Planned Parenthood will not perform abortions even in cases to save the life of the mother even though that is allowed under the pre-1973 Arizona law, the one that has not been enforced since the Roe decision.

But Cathi Herrod, president of the anti-abortion Center for Arizona Policy, said there is nothing to study. She Friday's decision immediately breathes new life into that territorial-era law that makes it a crime for doctors to assist in a "miscarriage'' unless it is done to save the life of the mother.

The law, which has no exception for rape or incest, carries a penalty of from two to five years in state prison.

In 2020, the most recent year for which data is available, there were 13,186 abortions performed.

Whether prosecutors will act — and when — remains unclear.

Maricopa County Attorney Rachel Mitchell said if a case is submitted her office will review it to determine if there is a "reasonable likelihood of conviction.

"There undoubtedly will be legal challenges to the laws in Arizona,'' Mitchell said in a prepared statement. "This important legal review will take time and any such rulings will guide my decision-making on these matters.''

Pima County Attorney Laura Conover, who previously vowed to do what she can "to ensure that no person seeking or assisting in abortion will spend a night in jail,'' would not answer questions about whether her office would begin processing complaints.

And even Herrod said there are legal questions whether Attorney General Mark Brnovich, who filed a brief with the justices urging them to overturn Roe, has jurisdiction to enforce the law.

Friday's ruling drew a stinging dissent from Justice Stephen Breyer who said the ruling discards the balance that Roe and subsequent rulings made which concluded that, prior to viability, states cannot impose a "substantial obstacle'' on a woman's right to elect the procedure.

"It says that from the very moment of fertilization, a woman has not rights to speak of,'' he wrote for himself and Justices Sonia Sotomayor and Elena Kagan. "A state can force her to bring a pregnancy to term, even at the steepest personal and familial costs.''

And Breyer pointed out that some states have laws with no exception for cases of rape or incest.

"Under those laws, a woman will have to bear her rapist's child or a young girl her father's — no matter if doing so will destroy her life,'' he said.

Herrod said that Friday's ruling will do more than prevent women from getting abortions in Arizona. She contends it will allow the state to enforce another law on the books that prevents the delivery of medications designed to induce an abortion directly to women in Arizona, even from other states or countries — and even if no Arizona doctor is involved.

That, however, may get a fight from the Biden administration.

On Friday the president said he was directing the Department of Health and Human Services to ensure these medications, which have been approved by the Food and Drug Administration, would be available to the "fullest extent possible,'' though he did not spell out what that entails.

Less clear, Herrod said, is the future of available of Plan B, also known as the "morning-after pill.''

This over-the-counter medication, taken within days of unprotected sex, can prevent a woman from ovulating. But Herrod acknowledge it also can work as an "abortifacient,'' preventing a fertilized egg from implanting in the uterus.

"That is a concern,'' she said. "That is another one of those kind of legal uncertainties that will be determined in the days ahead.''

One thing Herrod said Arizona could not ban, though, is the ability of women, denied an abortion in Arizona, from traveling to other states where the procedure remains legal.

The Center for Reproductive Rights says the California Supreme Court recognized the legal right to abortion in 1969, four years before Roe.

Nevada voters approved a measure in 1990 protecting the legal right to abortion. And other states ranging from Washington to New York have statutes allowing women to terminate pregnancies.

There's another complicating factor in Arizona.

Earlier this year the Legislature approved a measure sponsored by Sen. Nancy Barto, R-Phoenix, to outlaw abortion after 15 weeks of pregnancy. That was modeled after the Mississippi law that became the basis for the U.S. Supreme Court to take another look at Roe.

That law will take effect 90 days after the end of the current legislative session, meaning likely in late September. And Gov. Doug Ducey said that, as far as he's concerned, on the effective date it will supersede the pre-1973 law.

"This law was signed this year,'' he told Capitol Media Services earlier this year. "I think that the law that you signed in 2022 supersedes 1973.''

Barto disagreed, pointing out that the bill Ducey signed actually spells out that it does not repeal the pre-Roe law.

"It'll be the courts that determine this situation and not our governor or any other person with a differing opinion,'' she said.

There were 636 abortions beyond 15 weeks performed in Arizona in 2020.

There's another factor that could determine the right of women in Arizona.

The state constitution, unlike its federal counterpart, has a provision specifically guaranteeing a "right to privacy.'' Several lawyers have said that provides a basis for keeping abortion legal.

But Herrod, who is an attorney, said she doubts justices here will buy that argument. And there's also the fact that abortion was illegal when the Arizona Constitution and that right to privacy was approved in 1912.

There is currently a petition drive in Arizona to put a measure on the November ballot to protect abortion rights here and overrule the pre-1973 law.

The initiative would put a "right to reproductive freedom'' in the Arizona Constitution, covering all matters relating to pregnancy.

It would bar state and local governments from interfering with that right, which would range from contraception to elective termination of a pre-viable fetus, defined as one with a reasonable chance of surviving outside the womb with or without artificial support. And it would allow abortion at any stage of pregnancy "if necessary to preserve the individual's health or life.''

Backers have an uphill fight.

They need at least 356,467 valid signatures on petitions by July 7 to just put the measure on the November ballot. And they did not launch the drive until the middle of last month, after the Roe decision was leaked.

Strictly speaking, Friday's ruling affect only abortion rights. But Justice Clarence Thomas said that the court should now reconsider other rulings which were based on issues of due process rights, including whether states can deny gays the right to marry, prohibit individuals from obtaining contraceptives, and making it illegal for two people of the same sex to engage in sexual conduct.

In writing Friday's decision, Alito said there is no historic basis for a belief that abortion was a protected right. He cited a series of state laws banning the practice, including the one from Arizona that goes back to 1865.

PHOENIX — Police fired tear gas from the windows of the Arizona Capitol building to disperse hundreds of people demonstrating outside, as lawm…

Roe ruling prompts rallies for, against in Tucson

Police fired tear gas at protesters at the state Capitol in Phoenix on Friday night.

Attorneys for the Arizona Medical Association contend the provision could subject doctors to criminal prosecution for performing abortions that remain legal.

Arizona voters will not get a chance to constitutionally protect abortion rights, at least not this year. An initiative drive fell short of needed signatures. That means, absent court intervention, Arizona will be able to start enforcing its territorial-era ban on abortion, which contains no exceptions for rape or incest.

For Star subscribers: Judge hears arguments on whether law could be used to bring criminal charges against Arizona doctors who perform otherwise legal abortions, including those to save the life of the mother.

Why snail skin therapy is the new facial trend

Anti-abortion protesters celebrate following the Supreme Court's decision to overturn Roe v. Wade in Washington on Friday. The decision ended constitutional protections for abortion that had been in place nearly 50 years.

Abortion rights activists react outside the Supreme Court on Friday. The Supreme Court ended constitutional protections for abortion in a decision by its conservative majority to overturn Roe v. Wade.

Cathi Herrod, president of the Center for Arizona Policy, details how Friday's Supreme Court ruling allows the state to once again enforce its pre-1973 law making abortion a crime. With her is Sen. Nancy Barto who has authored many abortion restrictions including a new 15-week ban.