An A-10 soars over the Barry M. Goldwater Range-East in southwestern Arizona. Davis-Monthan offers easy access to the range for training missions. 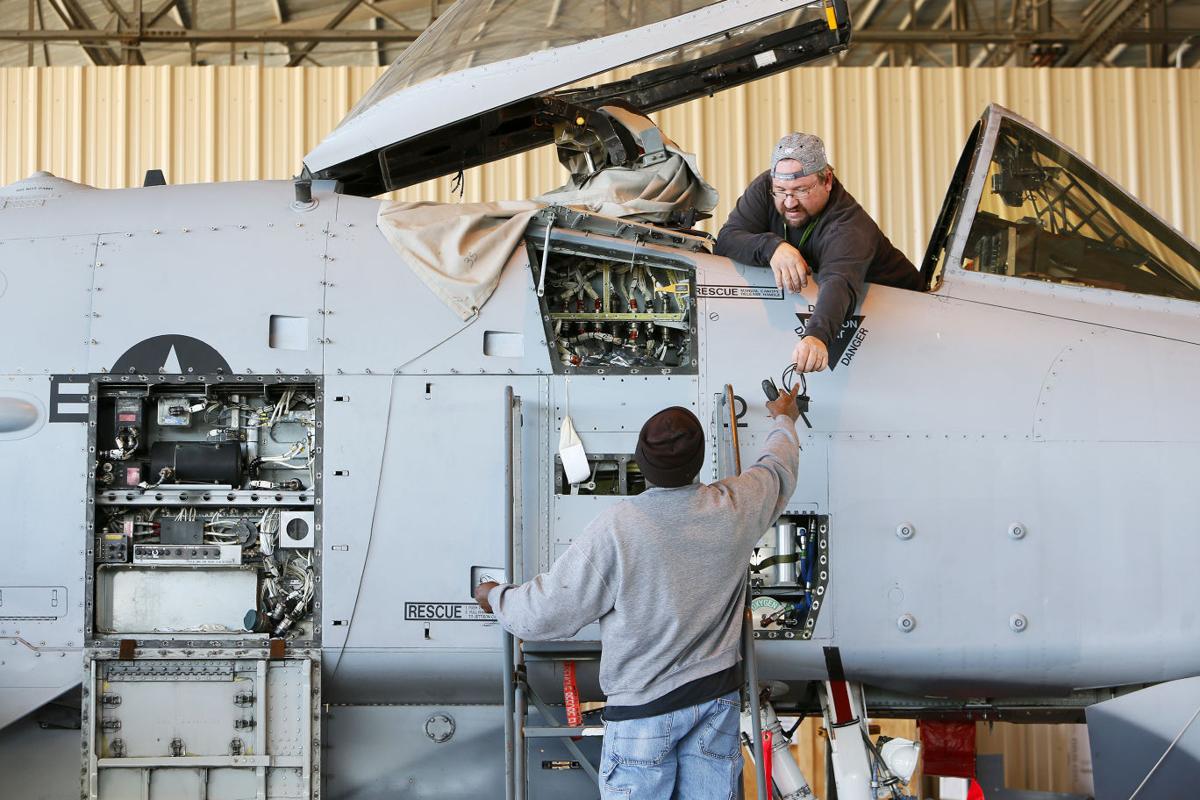 Electricians Demetrius Moore, bottom, and William McNew work on an A-10 at the 309th Aerospace Maintenance and Regeneration Group at D-M. Installing new oxygen systems on the planes is part of a years-long upgrade program. 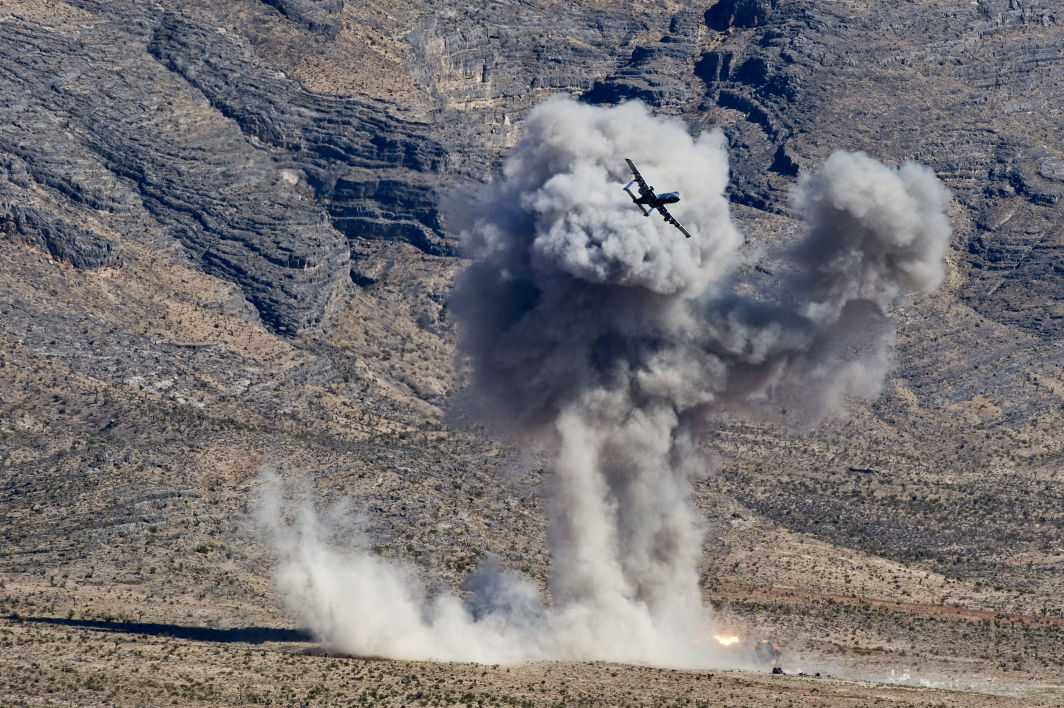 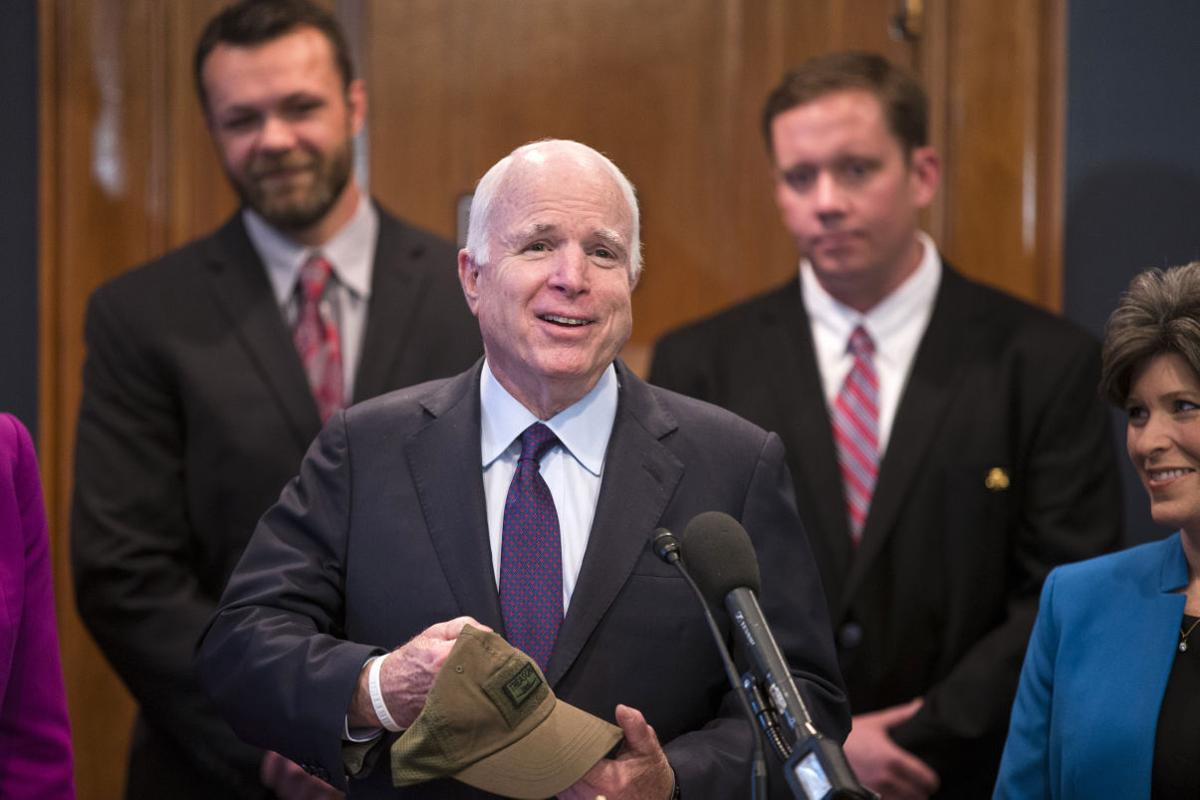 As chairman of the Senate Armed Services Committee, Sen. John McCain, R-Ariz. holding an A-10 cap, is using his political might to help keep the “Warthog” aloft.

For this year — and perhaps longer — the A-10s that fly over Tucson almost daily may escape the budget ax with help from a longtime ally with new power.

The Air Force wants to retire the entire fleet of A-10 “Warthogs,” including three squadrons at D-M, by 2019 to save some $4 billion. But Arizona Sen. John McCain, a former Navy pilot who ascended to the chairmanship of the Senate Armed Services Committee in January, has vowed to halt the A-10’s retirement.

McCain argues that no other plane offers the low-level, sustained close air support the A-10 delivers.

The long-serving Republican senator scoffs at the Air Force’s contention that supersonic jets, including the controversial and costly F-35 Joint Striker Fighter, can replace the A-10 — and that until the F-35 is ready, F-16 and F-15 jet fighters can fill the role.

“In the short term — and I’m talking about years, not decades — I think the A-10 has to be kept in operation because there’s no adequate replacement for it,” McCain said at a press briefing in late March.

As one of the “Big Four” leaders of defense policy in Congress — the chairmen and ranking members of each chamber’s armed-services committees — McCain wields considerable power in the debate over the A-10’s future.

The Warthog also has a passionate, though less influential, champion in freshman Rep. Martha McSally, R-Tucson, a former A-10 pilot and squadron commander who sits on the House Armed Services Committee. McSally has made saving the A-10 one of her top priorities and has hammered the Air Force for its A-10 plans at every opportunity.

The A-10 is still a warfare powerhouse.

Right now, A-10s are deployed to fight Islamic State militants in Iraq and Syria. They also are in Europe in a show of support for Ukraine amid Russian aggression.

That, and high-level congressional backing, bodes well for its immediate future.

Though the 2016 defense budget won’t be finalized for months, the A-10 is looking safer. The House has passed a version of the 2016 National Defense Authorization Act that fully funds the A-10 fleet for a year and forbids its retirement, and McCain’s Senate Armed Services Committee has advanced similar measures.

But the end is clearly not far off.

The Air Force has mothballed more than 100 A-10s in recent years, despite upgrades intended to keep them flying until 2028.

Under a budget compromise last year, Congress let the Air Force put as many as 36 A-10s in “backup aircraft inventory” status — kept but not maintained to be combat-ready. In March the Air Force announced that 18 A-10s — including nine at D-M — would be put in backup status this year, with more to come.

That angers Rep. McSally, who calls last year’s budget compromise a bad deal for ground troops, and for taxpayers.

She says A-10s are an essential tool in recovering troops in harm’s way.

They can fly low and slow, loiter over battle areas for long periods and deliver crucial firepower with their massive 30 mm cannons.

“There’s no other airplane that can do that in the inventory or in future purchases,” she says.

She also notes that A-10s can be flown at a fraction of the cost of other front-line fighters.

“When you look at being a good steward of the taxpayers’ money, the A-10 is a relatively cheap airplane to operate even as it’s getting older,” she says.

The A-10 is also more capable than ever. All of the Warthogs in service have been upgraded with advanced “glass cockpit” avionics and the latest navigational, communications and fire-control systems.

Helmet-mounted targeting systems allow pilots to rapidly cue sensors or weapons and designate targets simply by looking at them.

And Boeing has been building new, stronger wings for the A-10.

With the ongoing wing replacements, the A-10 upgrades are expected to cost more than $2 billion, according to government estimates.

In contrast, the F-35 won’t get systems needed to use a key precision-guided ground attack missile — Raytheon’s Small Diameter Bomb II — until 2020.

Lawmakers have resisted a new round of base closures and realignments for now, saying the last BRAC in 2005 didn’t save that much money. But experts say a new BRAC round is inevitable in the next few years.

In the meantime, D-M supporters worry that the Air Force will make cuts that could leave the base vulnerable.

“I think the biggest danger to communities like ours is what I call a BRAC without a BRAC,” said McSally.

The Pentagon and the armed services “just start atrophying missions at bases — they just start slowly cutting them, moving them around, consolidating them at other bases. And the next thing you know, you’ve got nothing really important at your base and if there ever is a BRAC, you’re the weakest link, the obvious one to take out.”

The A-10’s immediate future may hinge on whether Congress acts to forestall sequestration, automatic cuts that would take effect next fiscal year unless Congress keeps spending within certain limits.

Budget cuts and the threat of sequestration are driving a restructuring of all military services. For example, the Army has proposed cuts that by 2020 could cost Fort Huachuca in Sierra Vista up to 2,700 of its roughly 5,300 military and civilian jobs.

Congress lessened sequestration cuts for fiscal 2014 and 2015, after some automatic reductions in 2013 prompted the Pentagon to impose civilian furloughs and other quick cost-saving measures.

“If we’re able to adjust or change or eliminate sequestration, the Air Force might be in a position to take a different approach,” says Shoopman, former commander of the Air Guard 162nd Fighter Wing at Tucson International Airport.

“Until we get to the root cause of sequestration, the A-10 is always going to be in jeopardy, and it’s going to be a long struggle.”

If not A-10s at Davis-Monthan, then what?

D-M, key to Tucson's economy, needs a new long-term role. This special report examines how its assets fit into possible new or expanded missions, and what other military communities can teach us.

But F-35 could fly overhead in the future

A smaller base wouldn't destroy Tucson's economy, but it sure would hurt

Transcript: The future of Davis-Monthan

But F-35 could fly overhead in the future

An A-10 soars over the Barry M. Goldwater Range-East in southwestern Arizona. Davis-Monthan offers easy access to the range for training missions. 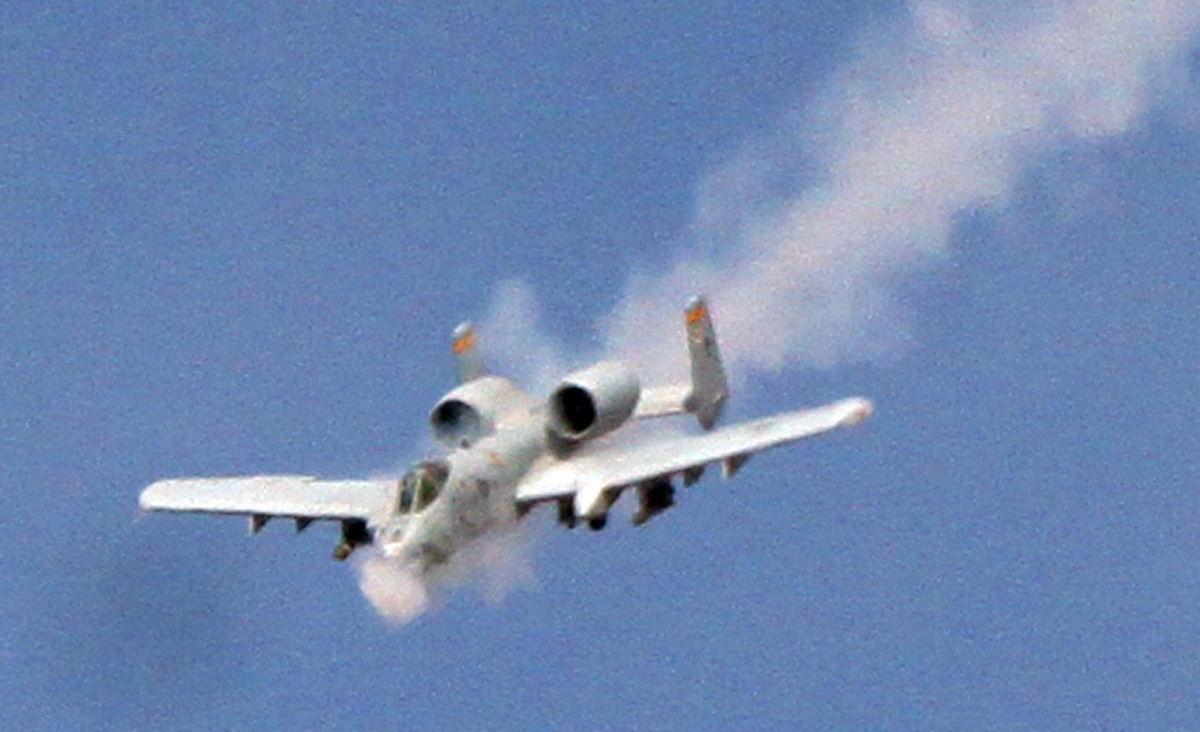 An A-10 fires its 30mm cannon at a target at the Barry Goldwater Range. The aircraft is known for its relatively massive firepower and ability to hover.

Electricians Demetrius Moore, bottom, and William McNew work on an A-10 at the 309th Aerospace Maintenance and Regeneration Group at D-M. Installing new oxygen systems on the planes is part of a years-long upgrade program. 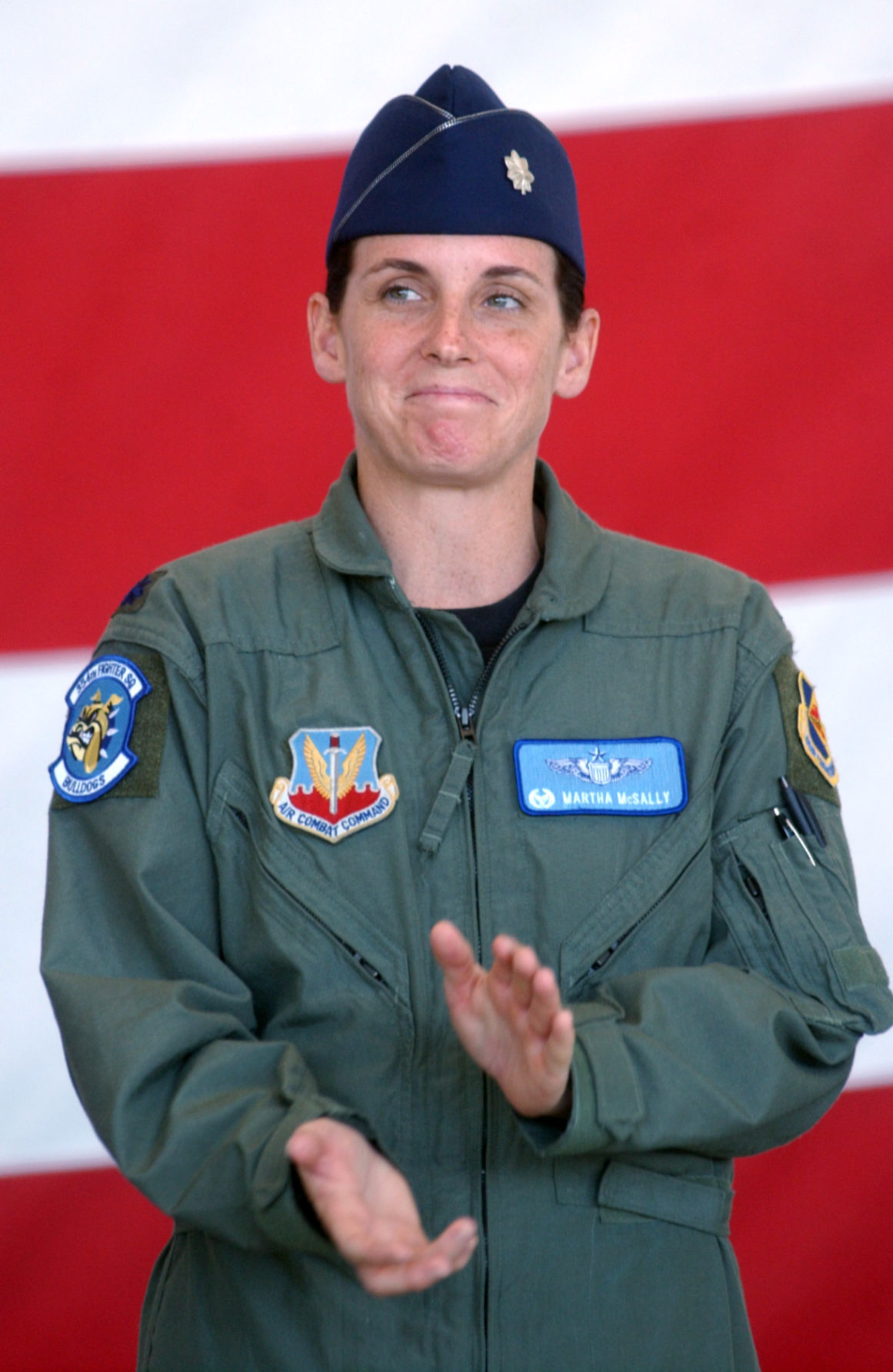 As chairman of the Senate Armed Services Committee, Sen. John McCain, R-Ariz. holding an A-10 cap, is using his political might to help keep the “Warthog” aloft.