Even before the morning’s ray of sunlight came through the huge opening in the ceiling, it is apparent as the light moves slowly down the wall that it reveals the scarred and faded murals, now almost void of all their rich colors that were characteristic of one of Tucson’s most celebrated artists.

Most of Ettore “Ted” DeGrazia’s brilliantly colored murals in his beloved chapel are gone, as are most of the surviving life-sized images of indigenous people in familiar poses.

They are replaced by faded lines of muted color.

His images once illuminated the walls that he built in memory to Father Eusebio Kino and dedicated to Our Lady of Guadalupe in 1952.

Still, what remains from the devastating fire on Memorial Day, May 29, 2017, that nearly destroyed the structure, is equally meaningful.

“It mostly has been a place of peace — and still is,” said Lance Laber, the executive director of the DeGrazia Foundation since 2005.

A calm serenity permeates the chapel as you sit on one of the damaged benches that survived the flames. Birds continue to sing nearby, but it is the quiet that still envelops the chapel’s visitors. Only the muffled rumble of a truck going up Swan Road breaks the spell.

DeGrazia’s chapel has since been repaired, no longer wrapped in a blue plastic tarp, shrouded in darkness for its protection and braced with cold metal and long wood beams to prevent further collapse.

Part of DeGrazia’s Gallery in the Sun, at 6300 N. Swan Road, the chapel has undergone a thorough restoration to make it more secure going into the future “but it will never be the same,” Laber said.

Almost immediately after the fire he wanted Eric Means, with Means Design and Building to restore the chapel.

“They rebuilt the ceiling and roof, repaired some of the damaged adobe bricks, rebuilt the saguaro rib doors and reframed windows, and replastered the walls — which was difficult because in some places DeGrazia left it either really thick or almost paper-thin,” Laber said, closely pressing his index finger and thumb together.

There was talk about installing a sprinkler system but it was thought to be dangerous in another way. A leaking water system could cause more water damage if it was left unattended, he said.

What remains are some of the murals that were water-damaged from the firefighting efforts, but also from years of exposure to the elements.

In some places, the plaster separated from the adobe bricks. Holes needed to be drilled through the plaster and an adhesive injected into the opening before pressing them back together, he said.

The chapel will reopen, Laber said, once a certificate of occupancy from Pima County is received.

“It is a lot different back then in 1952 when DeGrazia originally built the chapel," Laber said. “There was no building code to worry about, but now, we have to follow the rules.”

Numerous burning candles and flammable items on the altar were the probable reasons for the 2017 Memorial Day fire, Laber said.

With the hope of preventing another fire, a candle rack, similar to those used in Catholic churches, will be installed so only votive candles in glass containers will be allowed in the future, he said.

Much like the mission at San Xavier, proper candles will be available in the DeGrazia gift shop.

“But bare candles will no longer be allowed in the chapel and none will be allowed on the altar,” Laber said. “We are doing all we can to mitigate the problem.”

To prevent a buildup of too many items and gifts accumulating on the altar, there will be a more frequent removal of the items than in the past.

As was the custom before the fire, they will be buried on the property, Laber said.

“We will not just let them pile up as in the past — not constantly cleaning the altar more consistently is too dangerous. We found that out in the worst way.”

RETURNING TO ITS ROOTS

During a board meeting earlier this year, an encaustic painting made out of beeswax by DeGrazia from the 1950s was placed on the altar.

“We wanted to let the board members see it in place on the altar,” Laber said.

It fit right into place like a glove because it was not the first time the painting was placed there.

In the November 1955 issue of Arizona Highways, DeGrazia placed the same 1950s encaustic painting above the altar.

Later, the painting was replaced by a mural of Our Lady of Guadalupe that he painted directly above the altar.

Among security measures, the newly installed encaustic painting will be secured with a metal collar to keep the image in place, Laber said.

In addition, a security company monitors the facility at night, he said.

“The purpose of bringing back an image of the Virgin is to make the altar once again the focus of the mission,” Laber said.

And, as the restoration process continues, little by little, some of the lost color is also beginning to return, thanks to artist Ginny Moss Rothwell.

Moss Rothwell, who first met DeGrazia in 1973 while in her early 20s, is in the process of replacing some of the original background color next to the remaining murals.

Using color photographs she took in 2013, Moss Rothwell is trying duplicate the original colors as best as possible, she said.

Placing several of the photos side-by-side, it is easy to see what was lost in the fire.

A combination of yellow and white paint is carefully dry brushed, as she uses a thick, heavy carpenter’s brush in a dabbing motion around the faded image of a man on bended knee while carrying a bundle of flowers on his back.

The finished wall next to the altar directly behind her is once again a brilliant turquoise color with stars painted in DeGrazia’s style.

She is familiar with his style after being mentored and encouraged to develop her own technique by the artist while working for him from 1973-1977 as she earned a fine-arts degree.

Moss Rothwell even accompanied DeGrazia on his famous horseback ride deep into the Superstition Mountains in May 1976 as he burned 100 unsold paintings worth an estimated $1.5 million in defiance of his descendants possibly having to pay a high inheritance tax.

Moss Rothwell remembers it as a quiet ride, even though there were friends and a film crew with some media that tagged along to document the event.

“It was a very emotional ride,” Moss Rothwell said. “I understood the need but felt sad about him having to burn his work.”

After the chapel fire, it was decided to restore the structure but not reproduce DeGrazia’s murals.

Instead, in December 2018, Moss Rothwell was contacted by Laber to paint the background over the altar and around the remaining murals after the fire, she said.

The text explaining the miracle of Our Lady of Guadalupe near the entrance is also going to be restored where it was damaged, Moss Rothwell said.

“I love doing the work here,” she said, “I have deep roots with the gallery because of my past working with DeGrazia.

“I even think DeGrazia would love the restoration project and he would like the fact that I am restoring his work to the best of my ability.”

Even as the restoration takes shape, the guilt surrounding the fire continues to plague Laber to this day. He was in Mexico at the time of the fire.

“More than anything else, I have a heavy heart. I feel real sad,” he said.

Laber’s history with the chapel and gallery goes back to his childhood, when he was 5 years old.

“Everyone who has cared about this place has felt the same way. It has been a sad time,” Laber said. “It’s nice to see it close to reopening, but it will never be the same.

“DeGrazia will never be back to repaint the murals,” Laber said, his voice trailing off.

DeGrazia Gallery in the Sun will celebrate what would have been artist Ted DeGrazia's 110th birthday on June 14.

Visitors can stroll through the 10-acre gallery grounds to see DeGrazia's art and architecture from 10 a.m. to 4 p.m. at 6300 N. Swan Road.

Admission is free for the day and there will be cake and ice cream.

Photos: What fire did to DeGrazia Mission in the Sun

The historic chapel next to the DeGrazia Gallery in the Sun in the Catalina Foothills was heavily damaged by fire on May 29, 2017.

Photos: Ted DeGrazia and the Gallery in the Sun

Artist Ettore "Ted" DeGrazia, 1909-1982, was born in Morenci, Ariz., to Italian immigrants. He was educated at the University of Arizona. He a…

After a fire damaged Ted DeGrazia's "Mission in the Sun" last Memorial Day, work is underway to salvage as much as possible before restoration process begins in the spring.

DeGrazia's 'Arizona Highway' paintings at Gallery in the Sun

Arguably, Arizona Highways magazine did more to put the state on the tourist map than anything else.

BUCKEYE — A former deputy fire chief with the Rio Verde Fire District has died in a car crash in Buckeye two weeks after his retirement, autho…

Lawmaker aims to give Trump free pass in 2020 Arizona primary

The House speaker said the move came at the request of the Arizona Republican Party.

If Sean Daniels has his way, Arizona Theatre Company will soon have a national reputation. Maybe even an international one. 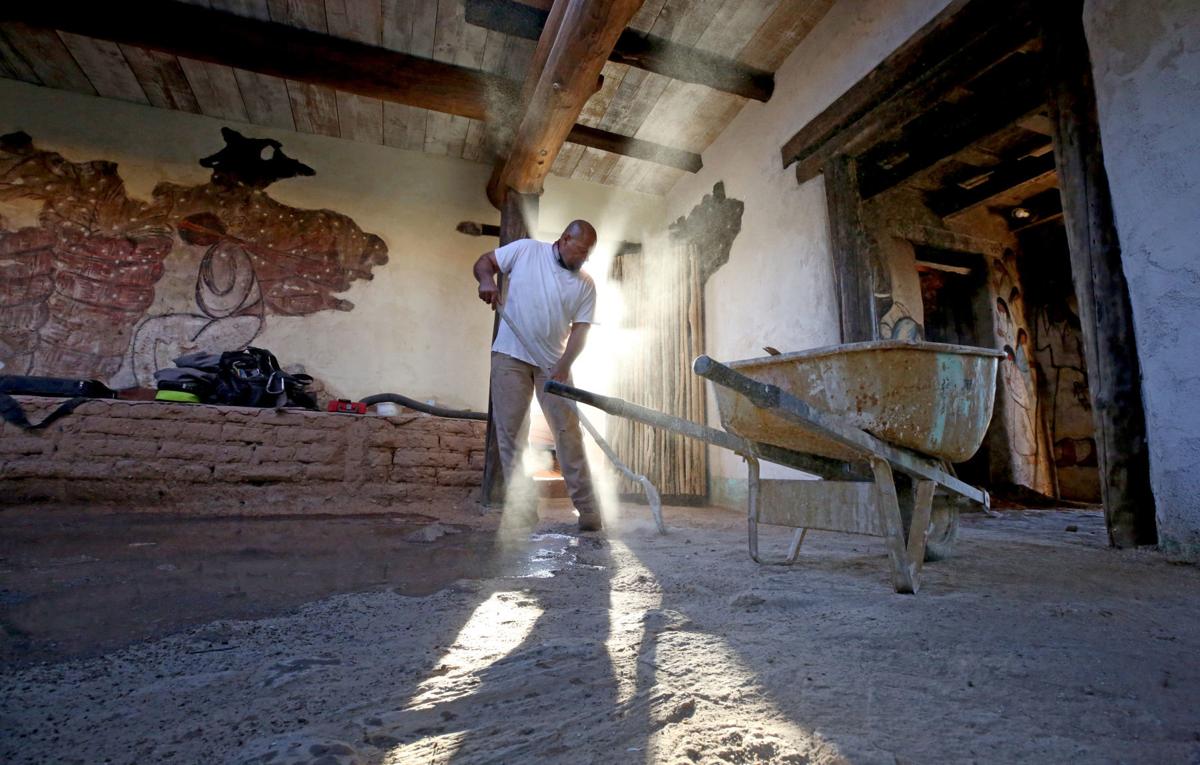 A fire in 2017 ravaged the chapel, built by artist Ted DeGrazia. A decision was made to restore the chapel structurally but not to attempt to reproduce its destroyed murals. 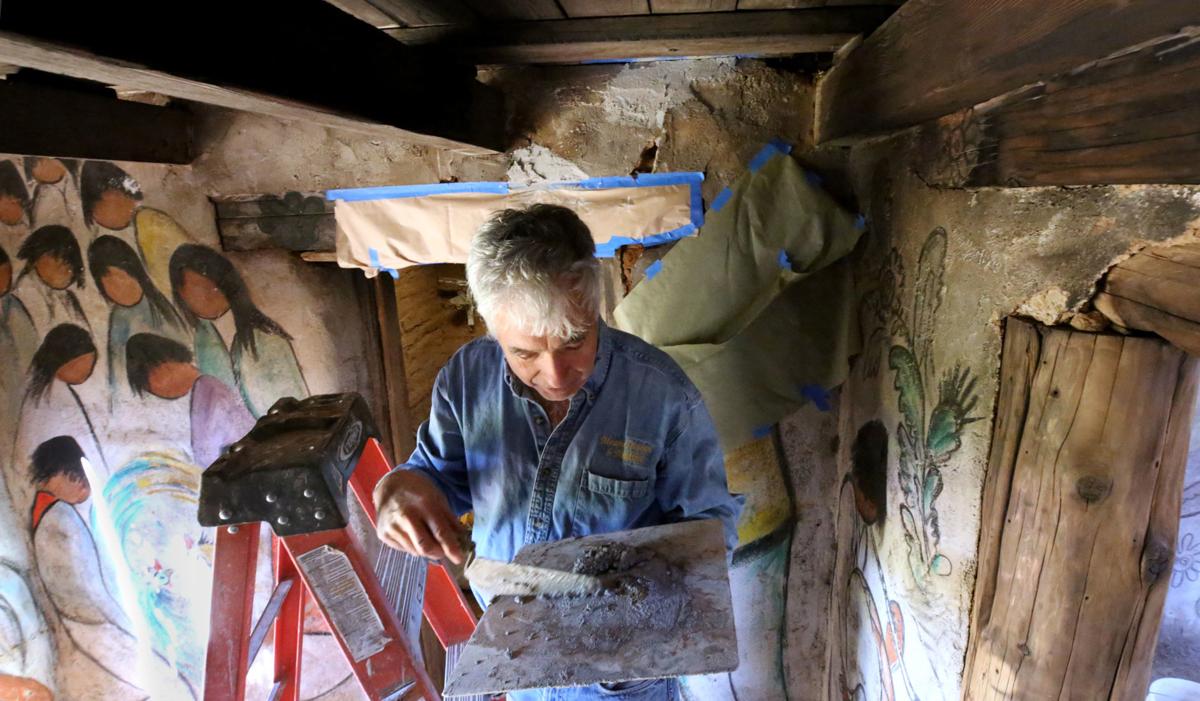 With trowel in hand, Eric Means, with Means Design & Building, gets ready to put some lime plaster on the wall behind him in the vestibule of the DeGrazia chapel. 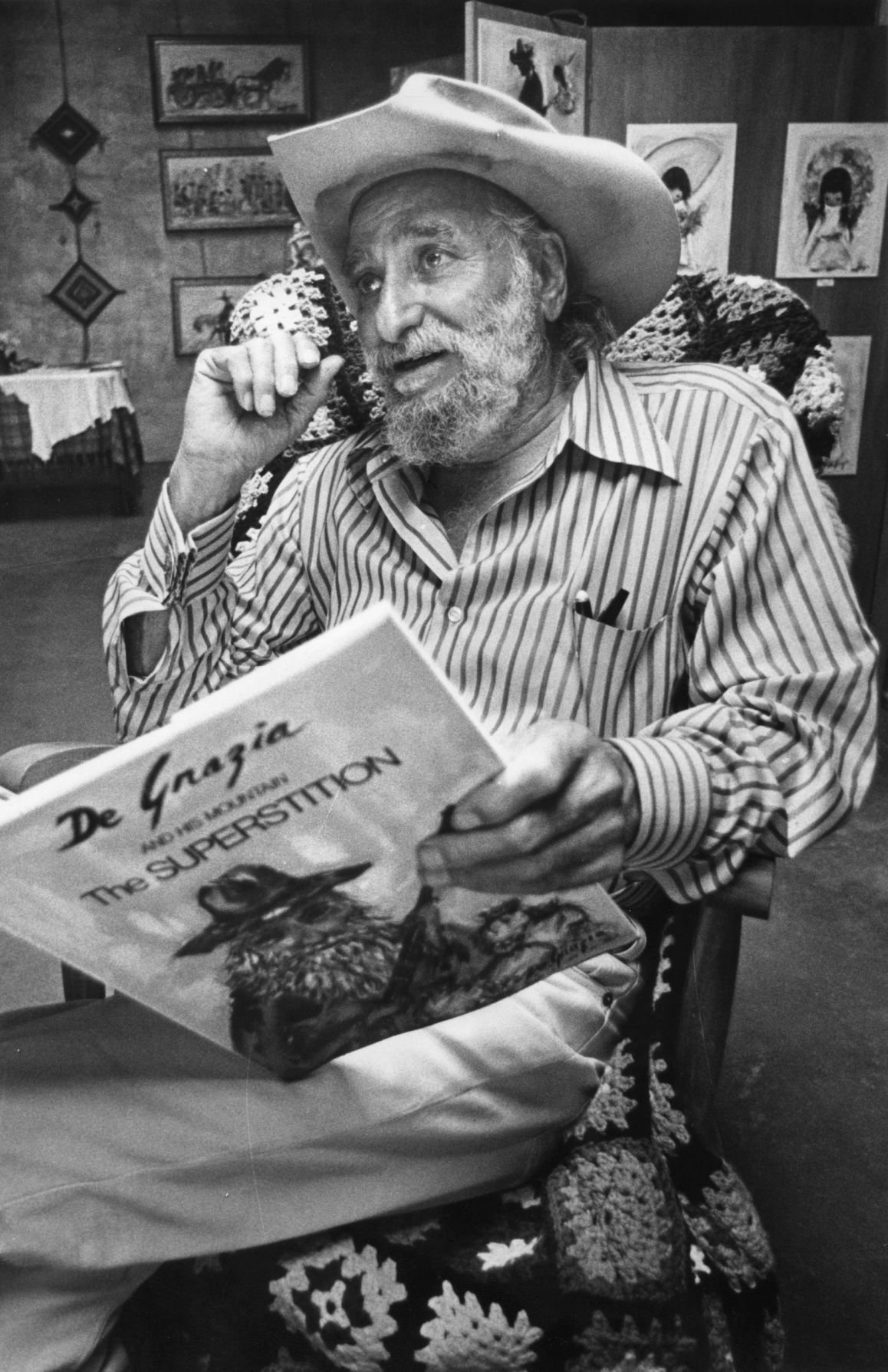 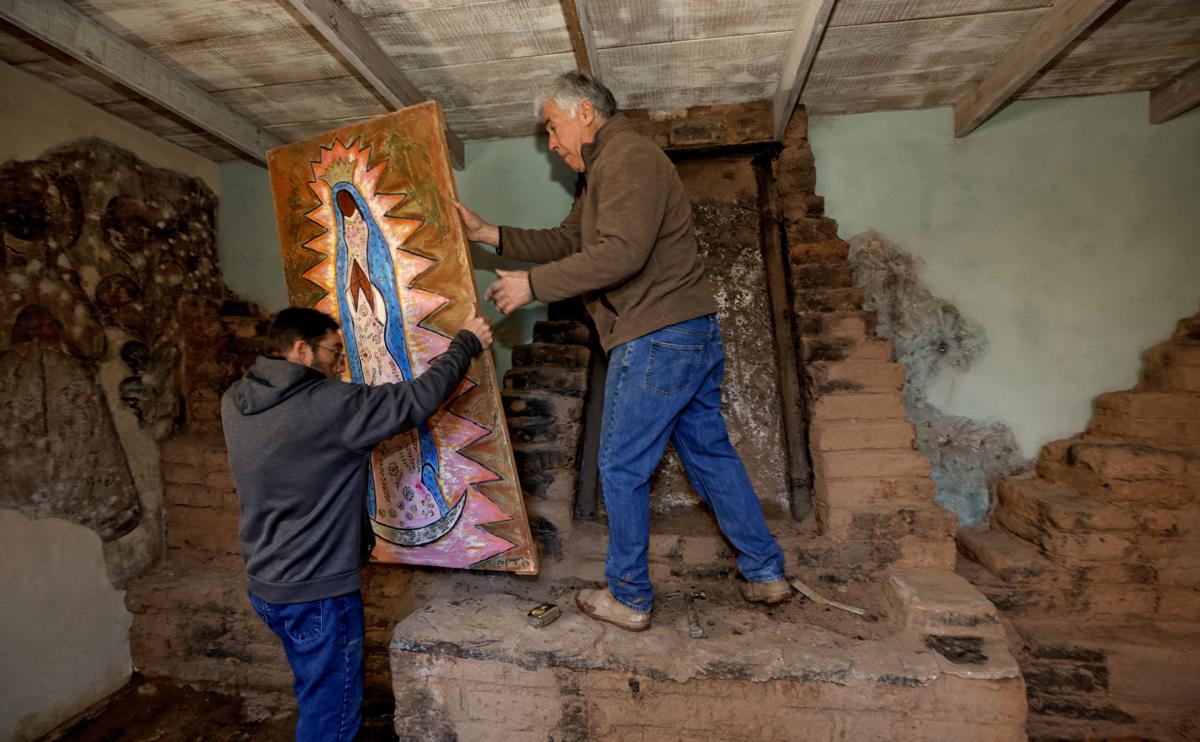 Lance Laber, left, the executive director of the DeGrazia Foundation, helps Eric Means lift a 1950s encaustic painting of Our Lady of Guadalupe to its former position on the altar. 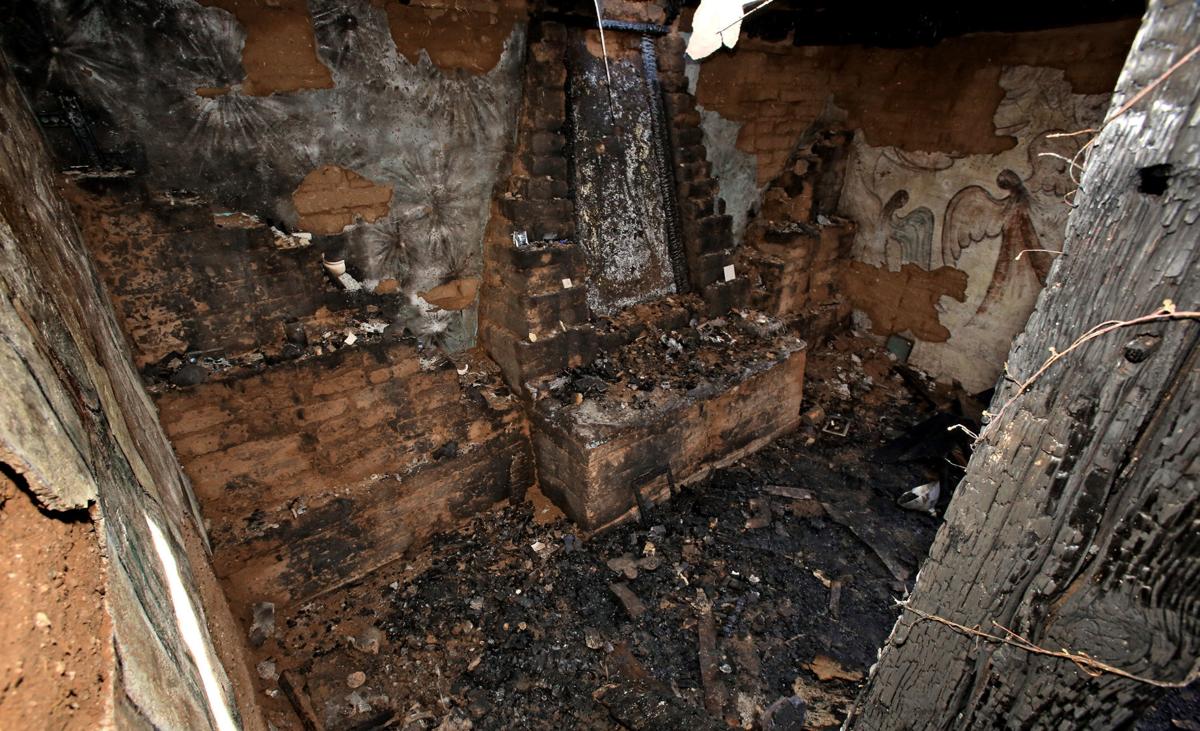 Burning candles and flammable items on the altar were the probable causes for the 2017 Memorial Day fire. In the future, only votive candles placed in a candle rack will be permitted. 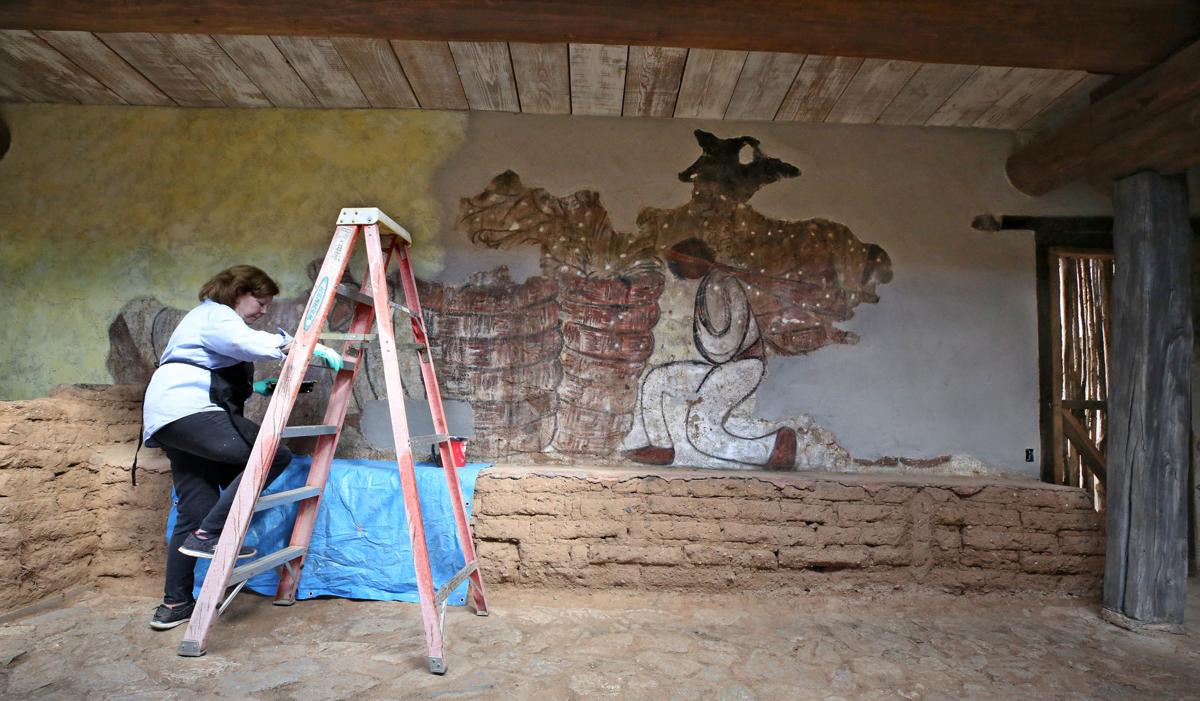 Artist Ginny Moss Rothwell, who first met DeGrazia in 1973 while in her early 20s, is in the process of replacing some of the original background color next to the remaining murals. 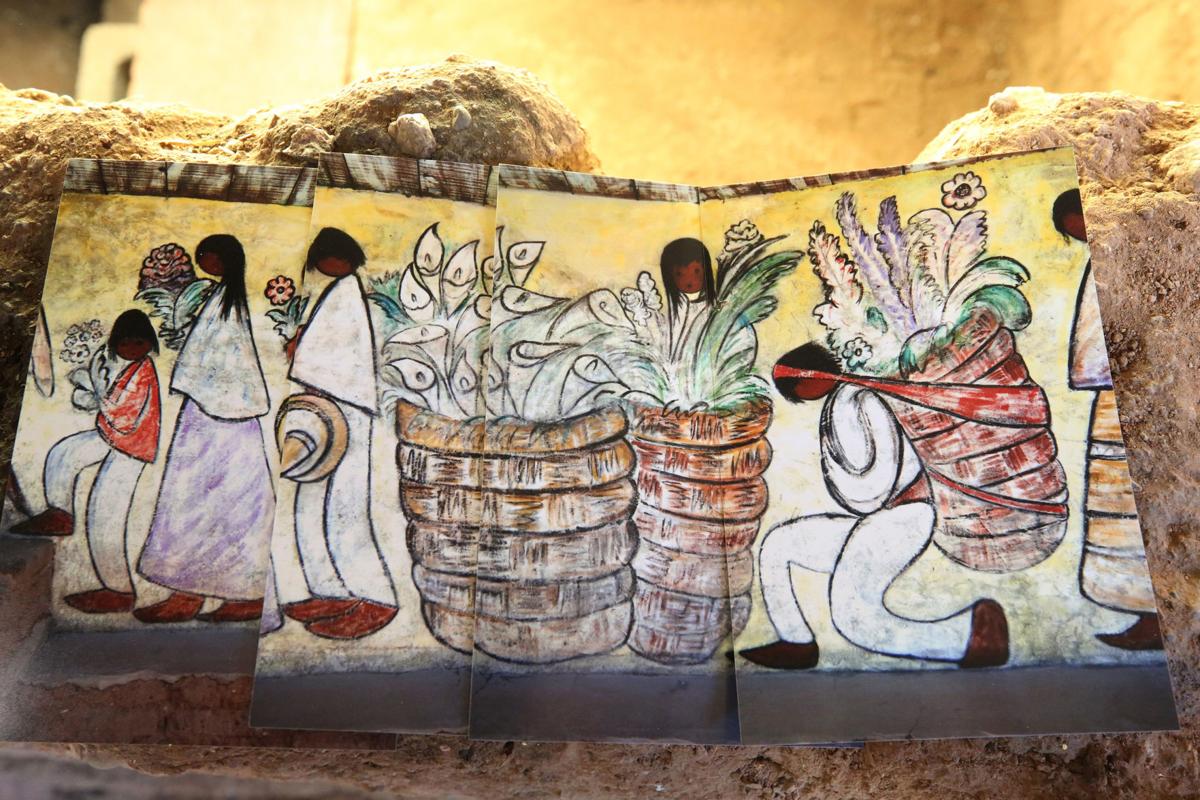 Ginny Moss Rothwell, who worked for Ted DeGrazia from 1973-’77, has accented one of the murals with yellow and white paint, using photographs she took in 2013 as a guide. 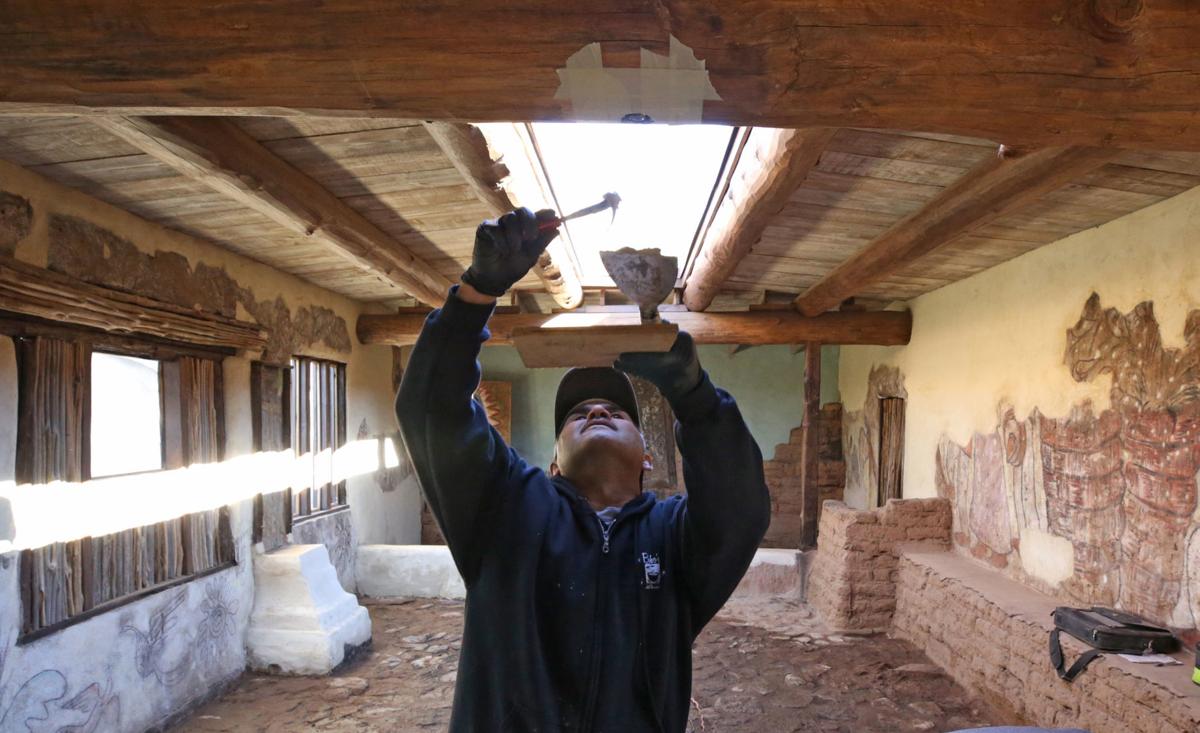 Octavio Egurrola patches a wooden beam as the restoration process continued in January on the chapel at the DeGrazia Gallery in the Sun, 6300 N. Swan Road.