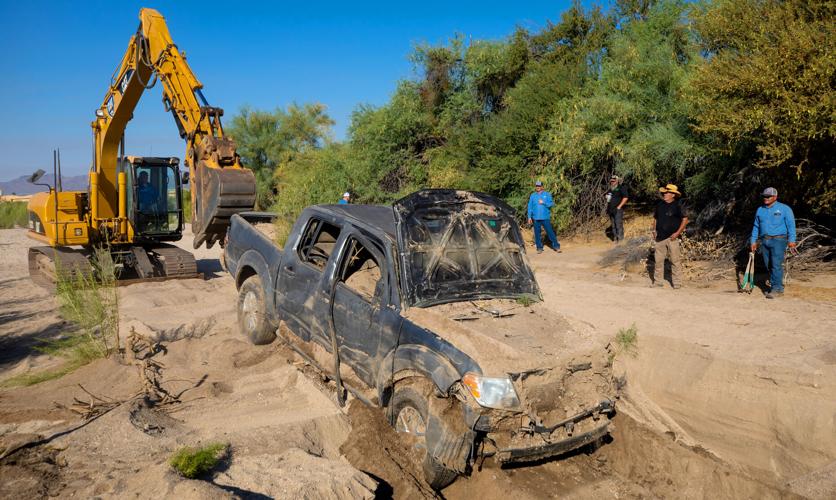 Pima County Flood Control employees, right, watch as Kasey Thomas of TB Contractors pulls out a sand-filled wrecked truck from inside the Cañada del Oro wash between North La Cholla Boulevard and West Overton Road. County officials and licensed contractors pulled out the truck, which was abandoned after a swift-water rescue in August 2021.

A wrecked truck, almost filled with sand and foliage, sits inside the Cañada del Oro wash between North La Cholla Boulevard and West Overton Road before contractors and Pima County Flood Control employees arrived to pull it out.

How do you remove an abandoned pickup truck that’s been buried for more than 10 months in the middle of the Cañada del Oro wash?

It requires planning, skill and a track-hoe excavator.

A crew contracted by Pima County spent about two hours Thursday morning digging up the Nissan pickup and hauling it out of the wash between Overton Road and the North La Cholla Boulevard bridge.

That’s where it ended up after being washed off of Overton by floodwaters on Aug. 10, 2021, moments after firefighters pulled three people from the vehicle in a dramatic rescue that was captured by news photographers.

The truck ended up about a quarter of a mile downstream, buried almost to the windows with rocks and dirt packed inside its cab and engine compartment.

“One more monsoon, and I don’t think it would have been showing anymore,” said Buck Thomas, owner of the company hired to collect it, Catalina-based TB Contractors.

He guessed there might be as much as 8,000 pounds of sand inside the truck, roughly twice the weight of the vehicle itself.

Thomas’ son, Kasey, used the track hoe’s shovel to carefully dig around the sides of the truck and scrape several feet of sand out of its bed.

“The only downside is it’s in ‘Park,’ and I don’t think we can get in there to put it in ‘Neutral,’” Buck Thomas added with a laugh.

A small group of county employees stopped by to watch the operation. Once the truck was out of the ground, they joked about taking out a classified ad and trying to sell it.

“It’s a daily driver with minimal water damage,” one of them said.

Kasey Thomas used the track hoe to shake the truck in an effort to dislodge the dirt from the engine compartment, but the hardened mud would not budge.

Buck Thomas said they could have tried tipping the vehicle over, but they didn’t want to risk spilling any of its remaining gasoline, oil or other fluids into the wash bed.

After about 45 minutes of digging and tugging, the wreckage was hooked to the track hoe with chains and dragged back up the Cañada del Oro to Overton Road, just a few feet away from where it was first swept into the wash. From there, Western American Towing & Transport loaded it on a flatbed tow truck and hauled it to the county’s fleet services facility on Mission Road near Starr Pass Boulevard.

Brian Jones, division manager for the Pima County Regional Flood District, said the truck will be kept there until the owner’s insurance carrier claims it.

Thursday’s removal operation cost about $7,200 in equipment and labor. Jones said the county will be billing the owner’s insurance for the salvage work, which illustrates just how dangerous and damaging flash floods can be.

According to Jones, there were roughly 130 swift-water rescues in Pima County during last year’s monsoon season, which ranked as the third-wettest on record in Tucson. As our summer thunderstorms start back up, he hopes the wrecked Nissan truck pulled from the Cañada del Oro will serve as a warning to motorists.

“This was a close call. This is what happens to vehicles when people try to drive through flooded washes,” Jones said. “Look at that truck. This very well could have cost people’s lives.”

For Star subscribers: Pima County officials are trying to decide what to do with the a truck that was abandoned in the Cañada del Oro wash after it was swept off the road by a monsoon flood in August.

There's more to that monsoon smell than meets the nose

A new paper tries to break down the smell of summer rain in the Sonoran Desert.

The U of A's monsoon forecasting contest is back, and organizers are hoping the rain is too.

The lightning-caused fire started June 11 and has burned at total of 11,489 acres. Officials with the observatory did not know the extent of the damage.

Tucson Water and its artist-in-residence have released a "Monsoon Mixtape" by local musicians that features — and celebrates — the sounds of our summer storms.

Gingerbread and glühwein: The best Christmas markets in Europe this year

Gingerbread and glühwein: The best Christmas markets in Europe this year

Pima County Flood Control employees, right, watch as Kasey Thomas of TB Contractors pulls out a sand-filled wrecked truck from inside the Cañada del Oro wash between North La Cholla Boulevard and West Overton Road. County officials and licensed contractors pulled out the truck, which was abandoned after a swift-water rescue in August 2021.

A wrecked truck, almost filled with sand and foliage, sits inside the Cañada del Oro wash between North La Cholla Boulevard and West Overton Road before contractors and Pima County Flood Control employees arrived to pull it out.