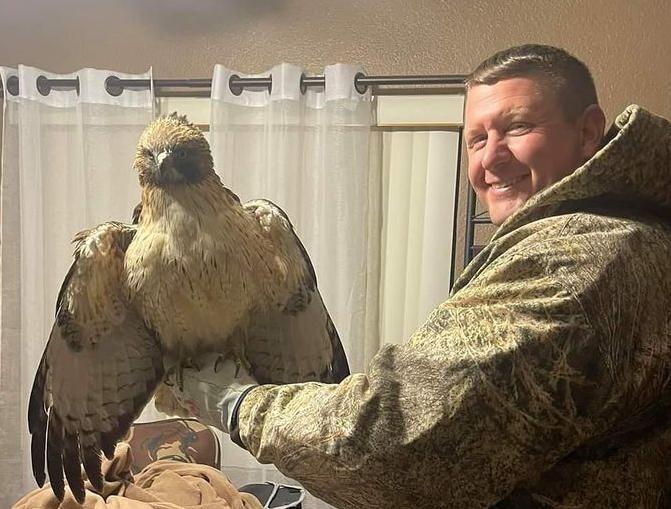 Chris Hatfield holds the red-tailed hawk he rescued from the center median of Interstate 10 on Monday. “I did some Steve Irwin stuff” to capture the hawk, he said. 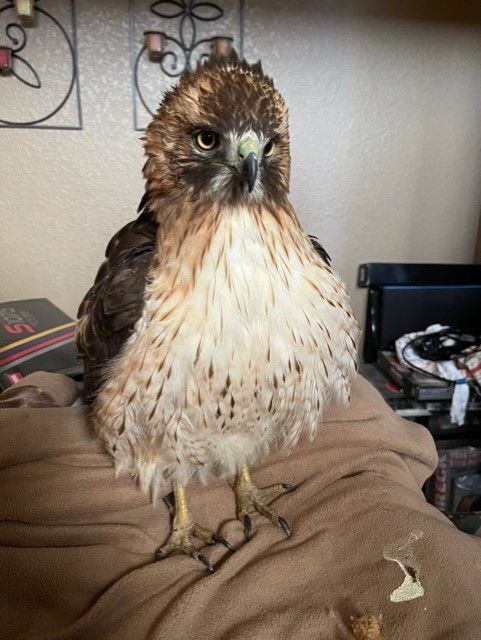 A red-tailed hawk sits on a blanket at the home of Chris Hatfield, the Tucson man who rescued it from the median of Interstate 10 on Monday. 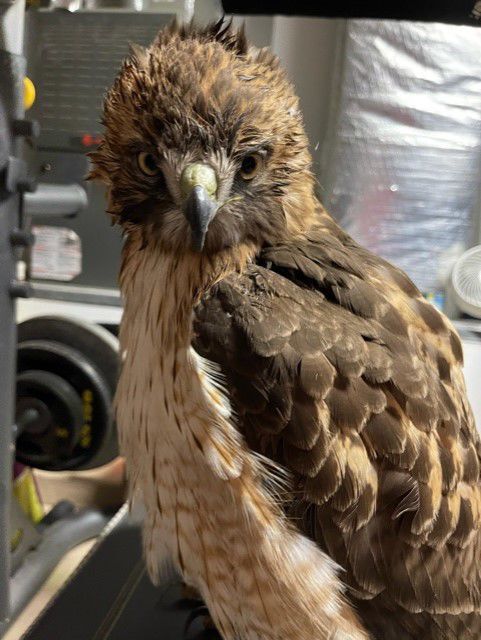 A red-tailed hawk dries off at the home of Chris Hatfield, the Tucson man who rescued it from the center median of Interstate 10 on Monday. 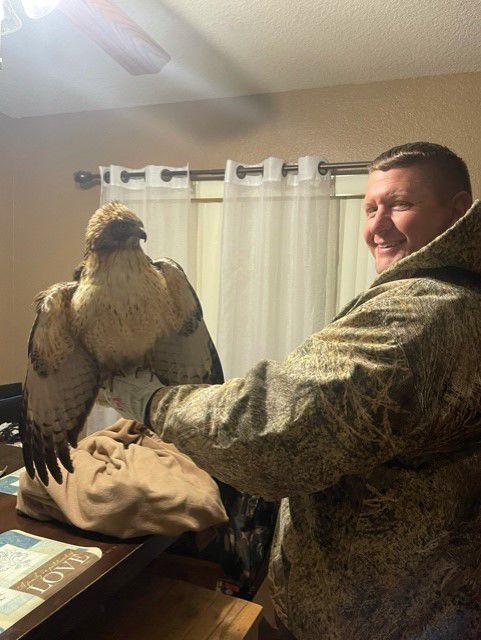 Chris Hatfield holds the red-tailed hawk he rescued from Interstate 10 near Valencia Road on Monday.

Monday was pretty typical for Chris Hatfield, except the part when he had a hawk in his Jeep.

The Tucson native spotted the soggy, dazed-looking bird in the center median of Interstate 10 near Valencia Road and went back to rescue it.

The foot-and-a-half tall red-tailed hawk spent the night inside Hatfield’s house and hung out on his dining room table all day Tuesday while he was at work.

Then, with the surprisingly calm bird perched on his arm, Hatfield drove it to the Tucson Wildlife Center, where it is now recovering nicely from a possible head injury.

“That gentleman made a heroic rescue,” said Lisa Bates, co-founder and executive director of the licensed animal rehabilitation facility near the east end of Speedway. “That poor hawk was probably going to freeze to death or die from shock.”

Hatfield said he was driving home from work on eastbound I-10 about 5:30 p.m. Monday when he spotted the hawk about 8 feet from the pavement.

After debating what to do for several miles, he got off at Rita Road and took the interstate west until he could turn around again at the Palo Verde Road exit.

It was getting dark and the rain had turned to sleet by the time he circled back to where he’d seen the hawk.

Hatfield pulled into the dirt median of the busy highway and flashed his headlights at the bird. When it didn’t move, he got out for a closer look.

“She was on her feet shivering with her head down,” Hatfield said, so he used an old blanket as a net.

“I threw it over her and grabbed her like a football,” he said. “I did some Steve Irwin stuff.”

Hatfield was a little worried about what might happen if the wild animal he just picked up suddenly decided it didn’t want to be there anymore, but the bird sat quietly with its head sticking up out of the blanket throughout the ride home.

It spent the night in a cloth nest Hatfield built for it on his dining room table. It still seemed a little dazed the next morning, but Hatfield could see the fog in its eyes beginning to lift.

He got the bird to drink some water and left his teenage son to look after it while he reported to his job as the maintenance supervisor at a Tucson apartment complex.

Hatfield returned home Tuesday afternoon to find the hawk still hanging out peacefully in the house, so he loaded the bird into an old wooden Budweiser crate for the drive to the wildlife center.

As soon as they were on the road, the hawk hopped out of the crate and tried to perch on the dashboard before finally settling onto Hatfield’s right arm — the same right arm he uses to work the stick shift. “She was like 10 inches from my face. She could have taken my lip clean off,” he said.

Instead, the bird spent the drive grooming itself and looking out the window at passing cars. Hatfield said he saw people gawking at the two of them as they drove by.

The hawk never even dug its long talons into his skin. “She wasn’t aggressive or anything. She kept it easy on me,” he said.

None of this is particularly out of character for Hatfield, who is the sort of guy who will stop to shoo a rattlesnake off the road so it doesn’t get run over.

Hatfield said he has previously helped rescue and release a roadrunner and a Cooper’s hawk, and used to raise birds when he was in 4-H as a kid.

“Red-tailed hawks are a little different. They’re a little bigger,” he said with a laugh. “I can’t leave animals behind. I feel bad.”

Bates said head injuries in birds can be tricky, but the hawk’s progress looks promising so far. As of Thursday, the bird was eating and drinking on its own and seemed to be regaining its strength.

The center will likely keep the hawk for a week or two to make sure the head injury is resolved. Then the bird will be returned to the wild.

Bates said she hopes Hatfield can be there when the time comes to help send the hawk on its way.

About 35,000 sandhill cranes are wintering in southeastern Arizona, in the areas south of Willcox. Many are overnighting in the wetlands at Wh…

"A weather event can always be exciting for the elephants, but a first snow is always special for a baby elephant," said director of zoologica…

After making sure the bird was OK, firefighters released it back outside 🐦

"While we did lose a few of our favorite flock members, we also love and understand our local wildlife," said the Tucson Petting Zoo & Funny Foot Farm.

Chris Hatfield holds the red-tailed hawk he rescued from the center median of Interstate 10 on Monday. “I did some Steve Irwin stuff” to capture the hawk, he said.

A red-tailed hawk sits on a blanket at the home of Chris Hatfield, the Tucson man who rescued it from the median of Interstate 10 on Monday.

A red-tailed hawk dries off at the home of Chris Hatfield, the Tucson man who rescued it from the center median of Interstate 10 on Monday.

Chris Hatfield holds the red-tailed hawk he rescued from Interstate 10 near Valencia Road on Monday.