BISBEE — An Arizona antique dealer has discovered a long-overdue item from the Los Angeles Public Library, and it’s way too big to fit through the book-return slot.

A bronze sculpture by a prominent, early-20th-century artist has turned up at Floyd Lillard’s antique shop in Bisbee, 50 years after it went missing from the iconic library in downtown L.A.

Lillard said he plans to return the artwork to the library, just as soon as officials there decide how best to transport the roughly 250-pound curved panel.

“I offered to drive it back myself, if they’ll pay my expenses,” he said. “They haven’t gotten back to me on that.”

For now, the bronze relief sits in a back room of the Miners & Merchants Antique Center on Main Street in Bisbee.

At about 5 feet long, 2 feet tall and more than an inch thick, the panel depicts six ancient scribes from different cultures, symbolizing the history of writing.

It is one of three parts of a larger piece by Lee Lawrie, the famous architectural sculptor best known for his free-standing “Atlas” in front of New York City’s Rockefeller Center.

Lawrie’s “Well of the Scribes” decorated a water feature in the L.A. library’s West Garden from 1926 until 1969, when the garden was paved over and turned into a parking lot six years after the artist’s death. The sculpture was lost after that.

“Literally I was speechless,” Szabo said by phone on Tuesday. “To see each of the scribes close up was remarkable.”

Lillard said he bought the sculpture about 10 years ago from a woman in Sierra Vista who kept it in her garden.

He thinks the woman was originally from California, but he couldn’t recall her name or any of the details about how she came to have the artwork.

He said she sold it to him for $500 but wouldn’t help him load it into his vehicle. He recalled wrestling it across her yard by himself.

“I wasn’t going to leave it there,” he said.

So what made him so sure it was something valuable?

“Fifty years in the business,” he said. “How does a doctor know when your arm’s broken?”

Lillard said he entertained a few offers for the piece over the years but could never bring himself to part with it.

He finally figured out its backstory about a year and a half ago, when an online search using terms like “bronze,” “Art Deco” and “California” turned up a description of Lawrie’s missing Well. But without a photograph for comparison, he couldn’t be sure.

“I was certain enough not to sell it, put it that way,” Lillard said. “Once I found a picture, I was dead-certain.”

Fittingly, the library mystery was solved with the help of a book.

A few months ago, a San Francisco-based news magazine picked up on a brief mention of the “Well of the Scribes” in “The Library Book,” Susan Orlean’s 2018 bestseller about the 1986 arson fire that nearly destroyed the Los Angeles Public Library.

The Journal of Alta California wound up publishing a “cold case” cover story on the lost artwork, complete with old photos of the library’s West Garden.

As soon as Lillard stumbled across the article online, he contacted the library.

A few weeks later, Szabo flew to Tucson and drove to Bisbee to see the work in person.

He said he had a hard time leaving it behind at the end of the visit. “I started thinking, ‘Would Delta allow me to have this as a carry-on?’”

Szabo said sometime in the coming months the library will probably have the bronze casting crated and shipped back to Los Angeles.

Eventually, he would like to see the piece incorporated back into the building in some way.

As for Lillard, Szabo said the library plans to repay him for his original $500 investment “at the very least,” though the antique dealer hasn’t asked to be compensated for returning the artwork.

“It’s theirs. I don’t call that a donation,” Lillard said. “I want to be there for the party, that’s all. They better invite me.”

Szabo wouldn’t have it any other way.

Both men are hoping all this recent publicity will lead to the return of the remaining two pieces of the “Well of the Scribes.”

“That’d be a great conclusion to the story,” Lillard said.

Szabo said he used to think the whole thing had been melted down or buried in some city scrapyard decades ago.

Now he can’t help but wonder if the rest of it might turn up in someone’s yard, maybe in the Hollywood Hills or someplace in Cochise County.

“Where there wasn’t an enormous amount of hope before … now I am hopeful,” Szabo said. 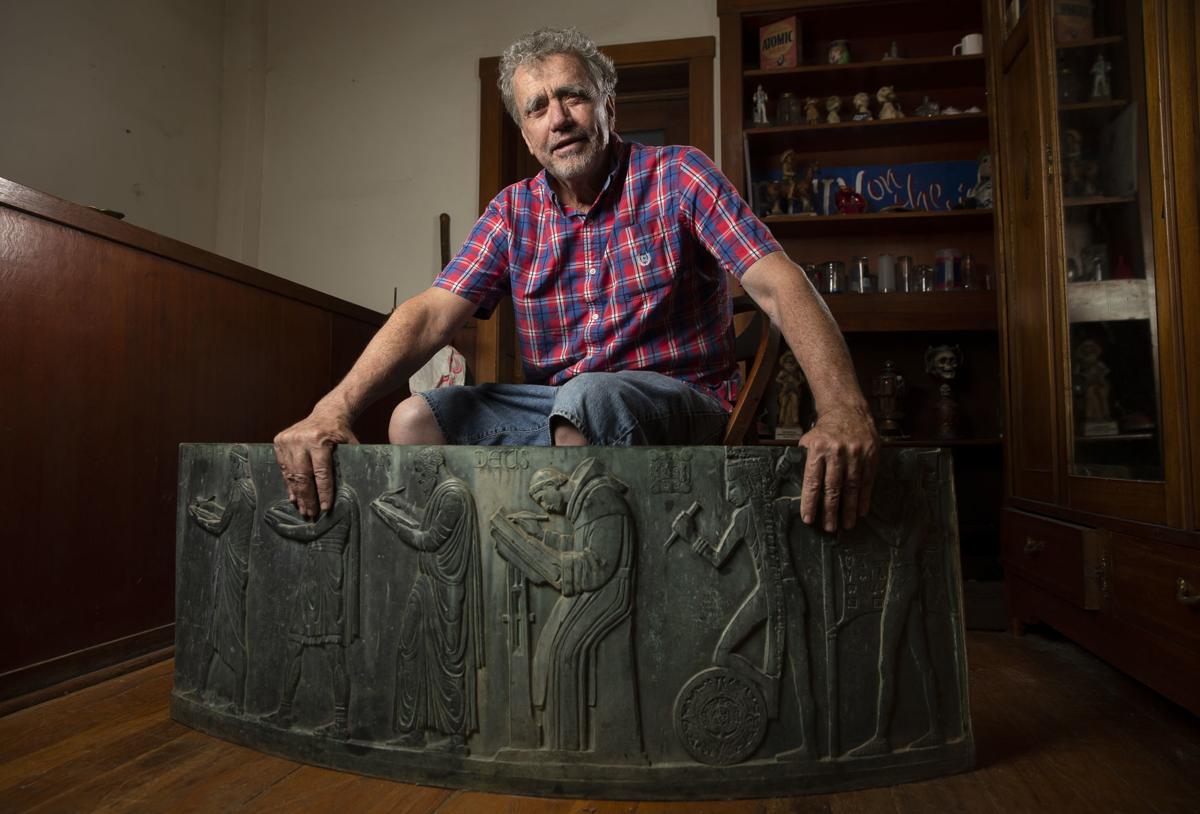 Bisbee antique store owner Floyd Lillard says he bought this sculpture about 10 years ago. It wasn’t until he recently read an online article that he realized it was originally part of a Los Angeles Public Library piece that had been missing for decades. 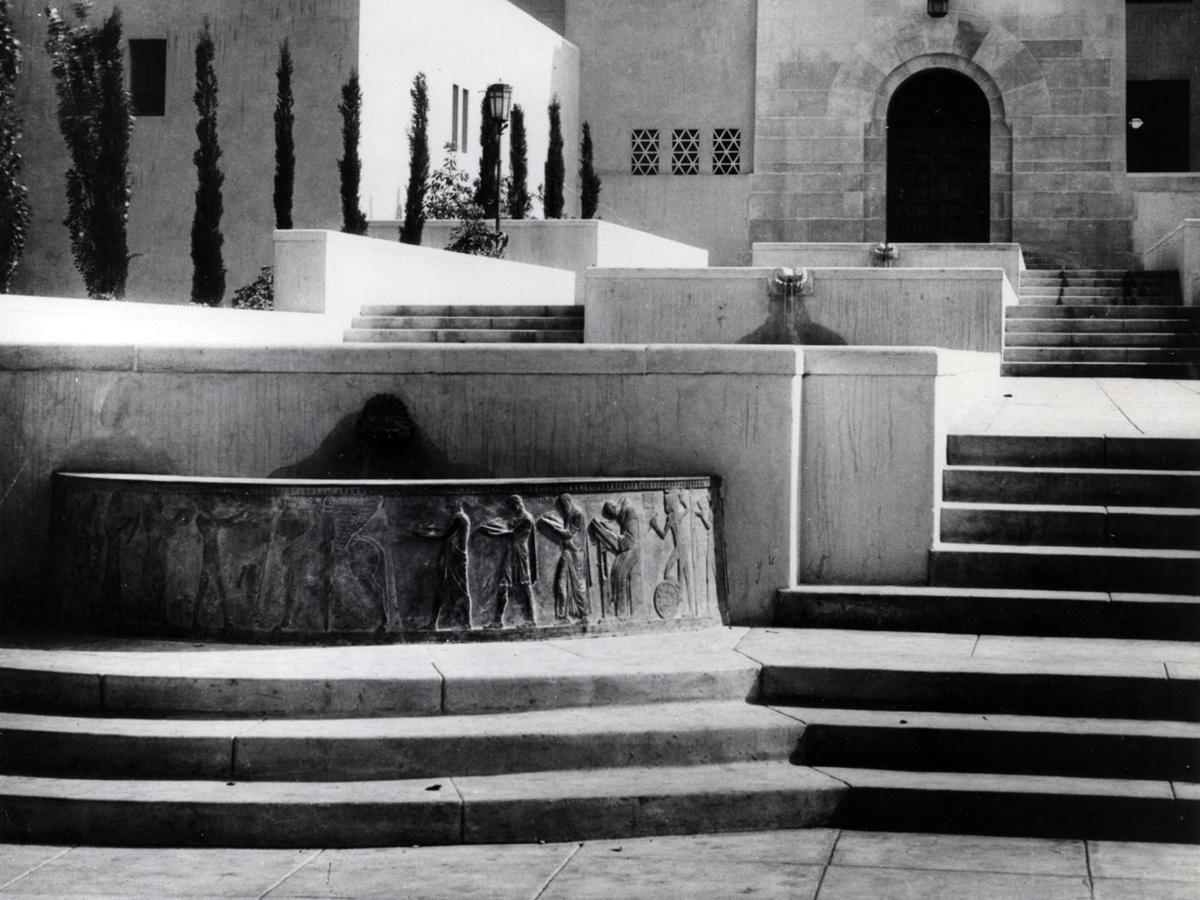 The artwork from Lee Lawrie’s “Well of the Scribes” disappeared when the West Garden at the Los Angeles Public Library was torn out in 1969.