Arizona Gov. Ducey to deploy 338 National Guard troops to border
Share this
1 of 2 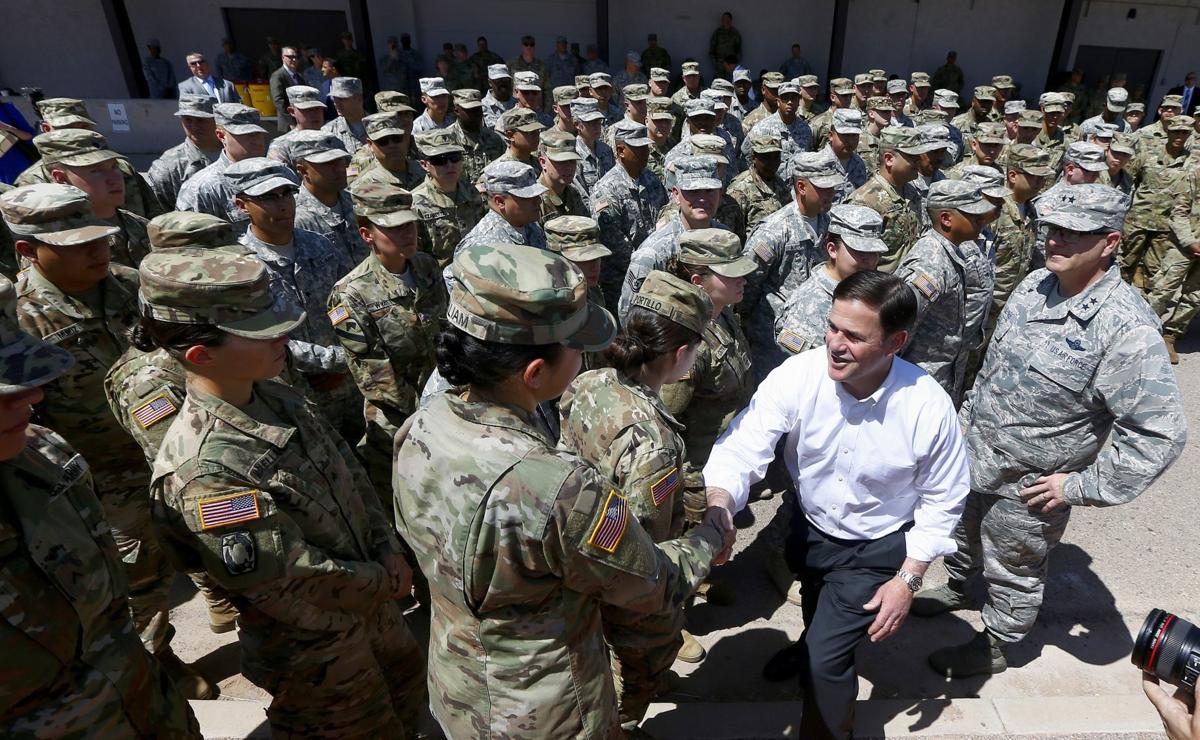 Gov. Doug Ducey, front right, meets Monday with Arizona National Guard soldiers prior to their deployment to the Mexican border at the Papago Park Military Reservation in Phoenix. The Border Patrol says it arrested 50,000 entrants along the U.S.-Mexico border in March. 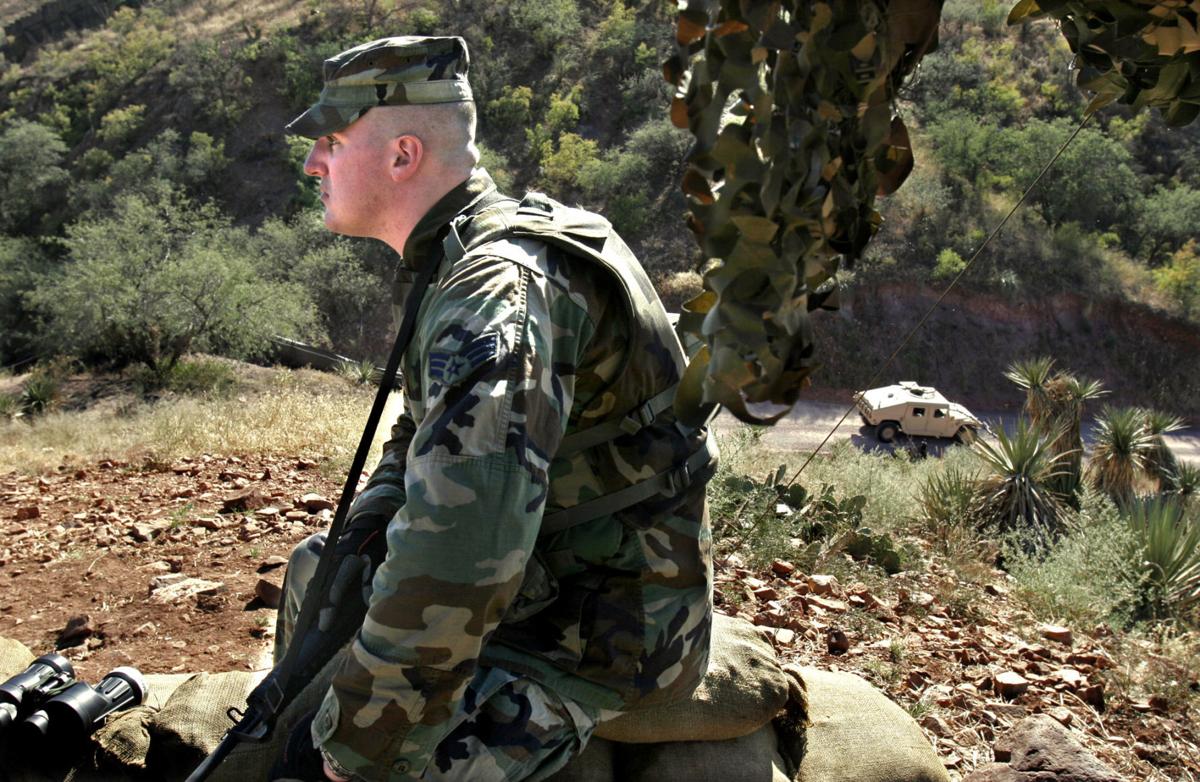 National Guard members are not to be used for enforcement, but in support roles and to enhance border security.

PHOENIX — Gov. Doug Ducey said Monday his decision to deploy 338 National Guard soldiers to the border is justified by what he described as a 200 percent spike in border-wide apprehensions between March 2017 and March of this year.

Ducey did not dispute that apprehensions along the Arizona-Mexico border are nonetheless as low as they’ve been in decades.

The Border Patrol has said it caught around 50,000 people on the U.S.-Mexico border in March, more than three times the number in March 2017. That erased a decline in apprehensions early in Donald Trump’s presidency for which Trump repeatedly has taken credit.

Speaking Monday with reporters after addressing the troops, Ducey said the deployment isn’t politically motivated, even as he claimed there is finally an administration in Washington that cares about the border.

The Republican governor accused the federal government of ignoring the border “for nearly a decade.” Yet, he acknowledged that the Bush and Obama administrations deployed far more National Guard soldiers, all with the same purpose: To provide support for U.S. Customs and Border Patrol.

“So for President Trump to call up the National Guard is not something that’s new and unique,” Ducey said in defending the decision.

Trump said last week he wants to send 2,000 to 4,000 National Guard members to the border. Texas announced Monday it will send at least 1,000 troops there. New Mexico’s Republican governor has said her state will take part in the operation, but hasn’t announced a deployment.

California Gov. Jerry Brown, a Democrat, has not said if the state’s National Guard members will participate.

“The idea is there is a mission here and to complete the mission so you can call it successful,” Ducey said.

The deployment is indefinite.

“You know, you don’t want to say to people that are trafficking drugs and human beings across the border how long you’re going to be there and show them a timetable,” Ducey said.

He also said he doesn’t think the border is a partisan issue. “You show me somebody who is for drug cartels or human trafficking or this ammunition that’s coming over a wide-open and unprotected border here,” he said.

The placement of soldiers along the border has raised some concerns about militarizing the area.

In a letter to Ducey, U.S. Rep. Raúl Grijalva, a Tucson Democrat, called the deployment “a mistake and an ineffective and wasteful use” of military resources. He said the country should be focusing on security and economic cooperation “without further militarizing border communities.”

Ducey said that misstates what the soldiers will be doing.

“These Guard troops are there to support the Border Patrol. So it allows us to get more from the Border Patrol to the border. It gets more boots on the ground and they serve in a support capacity, which they’ll be very good at.”

Pima County Sheriff Mark Napier said he is comfortable with the Guard’s mission.

“I share the concern some may have regarding the appearance of the militarization of the border,” he said in a prepared statement Monday after he and other sheriffs spoke with the governor. But Napier, a Republican, said such fears have been allayed.

“Arizona National Guard personnel will not be used in an enforcement role and will not have any law enforcement powers,” he said. “The governor made clear the Arizona National Guard are simply providing additional resources to enhance border security, better interdiction of drug and human traffickers, and to give humanitarian assistance to migrants suffering criminal victimization and life-safety issues due to the extreme environment.”

Defense Secretary James Mattis last Friday approved paying for up to 4,000 National Guard personnel from the Pentagon budget through September.

A Defense Department memo said “arming will be limited to circumstances that might require self-defense” but did not further define that.

Trump has said he wants to use the military at the border until progress is made on his proposed border wall, which has mostly stalled in Congress.

Ducey said he believes two-thirds of the border already has a wall.

“So if we want to fill in the other third with a wall, I would welcome that,” he said.

The National Guard assisted the U.S. Customs and Border Protection (previously the U.S. Border Patrol and U.S. Customs Service) on the Arizona…

Seven months into President Trump's administration - despite the rhetoric - the Arizona border remains largely as it was before he took office.

A primer on Arivaca, a "live and let live" kind of town

Even with growing border frustration, Arivaca residents say they respect each other.

Rancho de la Osa, a historic guest ranch on the U.S.-Mexico border southwest of Tucson, that has hosted presidents and movie stars. Part of th…

HOUSTON — Some National Guard members have started arriving at the U.S.-Mexico border with more expected as federal government officials seek …

If approved, women would be questioned about the reason for terminating a pregnancy.

A Tucsonan whose television was stolen did some amateur sleuthing to get it back, and authorities now are seeking public help to identify a po…

Guard troops return to Arizona-Mexico border, but military's presence is not new

The Arizona National Guard has played a quiet role in border enforcement for nearly three decades.

Gov. Doug Ducey, front right, meets Monday with Arizona National Guard soldiers prior to their deployment to the Mexican border at the Papago Park Military Reservation in Phoenix. The Border Patrol says it arrested 50,000 entrants along the U.S.-Mexico border in March.

National Guard members are not to be used for enforcement, but in support roles and to enhance border security.