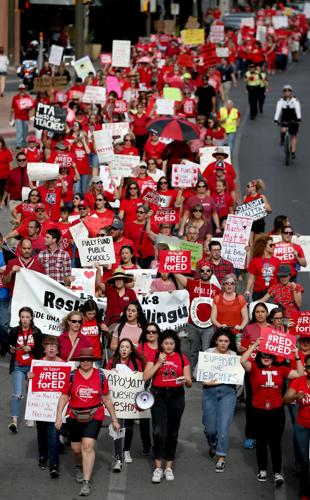 Approximately 1,500 Southern Arizona teachers marched down Congress Street, part of the rally and march for the #RedforEd movement, asking the state for increases in education funding and teacher pay, on April 4, 2018. 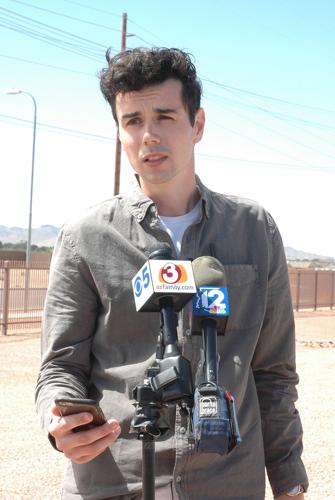 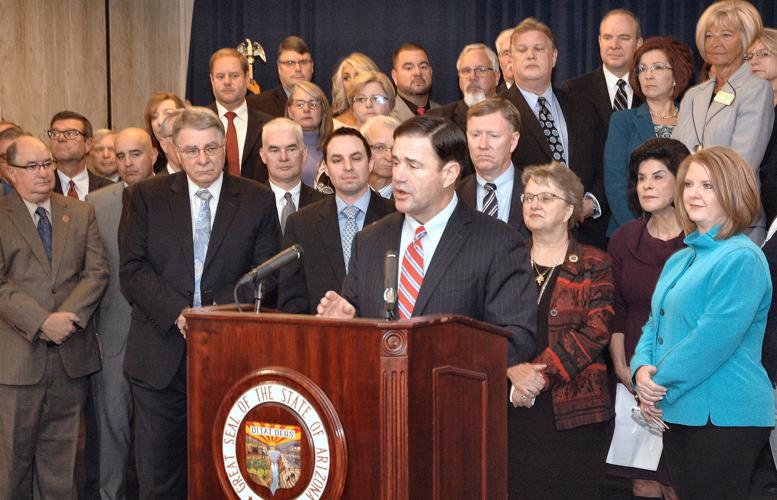 Gov. Doug Ducey at a January news conference with Republican legislators and some school officials announcing his plan to start restoring money the state took from schools during the recession.

PHOENIX — Gov. Doug Ducey says he won’t meet with the leaders of two teacher groups to talk about salaries and related issues even as they take the first steps toward a walkout.

The governor’s statement comes less than a week after a request by Noah Karvelis of Arizona Educators United and Joe Thomas of the Arizona Education Association “to begin a negotiation process to resolve the #RedForEd demands.” Those include not just a 20 percent salary increase to compete with neighboring states, but also restoring education funding levels to where they were a decade ago.

It also comes as Arizona Educators United is working with its member teachers to set a date for a walkout to get the attention of Ducey and legislators and to show the teachers are serious.

Karvelis said the decision is disappointing but not entirely a surprise.

“We feared that,” he said. “We hoped that wasn’t true. We thought maybe he would come to the table on this. But he’s continuing to ignore us.”

Meanwhile, Ducey is sticking with his plan to give teachers a 1 percent pay raise this coming year on top of a 1 percent increase for the current school year.

Ducey’s position could have implications, and soon.

Karvelis said Tuesday that his newly formed group is “about to hit the numbers we are looking for” in terms of job actions. Those include walk-ins, where teachers remain outside until the start of the day and enter together to show solidarity, as well as actual walkouts, where they simply do not show up to school.

“We will be taking escalated action and plan to set a date shortly if we do not see any response from him,” Karvelis said.

Ducey said late Tuesday that he doesn’t want a strike.

“We would love to avoid a walkout,” he said. “We want our teachers inside the classroom teaching, we want our kids learning, and we want more dollars in their paycheck.”

But the governor also said he does not have a plan for what he intends to do if thousands of teachers call in sick.

Instead, he’s trying to get his spending plan approved by the Legislature.

“The idea right now is we want to move the budget forward so we can get these dollars to them,” Ducey said.

He also suggested that teachers are unhappy because they don’t understand what he’s already done for them and what he’s prepared to do in the future. And he said it’s wrong to say his plan is simply that 1 percent pay raise.

For example, he said the state has added 9 percent in funds that are available for teacher pay since 2015.

More than half of that, however, is for new teachers necessary just to stay even with student growth.

There’s also the $1.7 billion cumulatively that Ducey said has been added to K-12 funding since he took office in 2015.

But here, too, that reflects money the state is required to add simply to keep pace with inflation and student growth. It also includes more than $300 million a year the state is providing to make up for money illegally taken from schools in the first place, in violation of state law requiring annual inflation adjustments.

He also disputes that teacher pay in Arizona is as bad as some have suggested, contending that the rankings are misleading. Ducey has said Arizona is no worse than No. 43 nationally.

But Dan Hunting, senior policy analyst of the Morrison Institute for Public Policy at Arizona State University, said for 2017, elementary school teachers rank 49th in the nation, up one notch from 2016, when the cost of living is factored in. There also was a one-spot increase for high school teachers, to 48th, Hunting said. The Morrison Institute “uses nonpartisan research, analysis and public outreach to help improve the state’s quality of life,” its website says.

Ducey said a lot of the furor among teachers is being stirred up by some who are more interested in making waves than actually dealing with the issue.

Exhibit No. 1 for Ducey is the AEA’s Thomas, who used a #RedForEd event to endorse Democrat David Garcia for governor to run against Ducey in November.

Also, Karvelis is running the campaign of Kathy Hoffman, a Democratic candidate for state superintendent of public instruction.

“Why would I want to sit down with someone who wants to play politics?” Ducey asked.

While many teachers find the governor’s plan wanting, Ducey said the package has the backing of more than two-dozen school superintendents. These are the officials who turned out for a January news conference when Ducey agreed to restore $100 million the state had shorted schools in what it was supposed to provide for things like textbooks, computers and buses.

That is less than Ducey himself cut from the same account in his first year in office. But the governor said he is committed to restoring the full funding of $371 million during the next five years.

It is that work with the superintendents that the governor said has been his focus, rather than with the teacher groups.

Ducey said he believes that any new money for those expenses should free up dollars that schools can then use for salary increases.

“We don’t have paper towels. We don’t have new textbooks. We don’t have tires for the bus,” he said. “So to think that there’s some sort of extra money here or that him giving more money to capital is going to open up all these different opportunities to increase our teacher wages is ridiculous.”

Tim Ogle, executive director of the Arizona School Boards Association, said any money helps — up to a point.

“Gestures like that are a step in the right direction,” he said. “But that doesn’t solve the problem.”

The bottom line, Ogle said, is that Arizona has a “crisis” in attracting and retaining teachers.

As to the potential walkout, while Ducey has no specific contingency plan, school officials are taking the threat seriously.

Ogle said his organization scheduled a “webinar” for school officials on how to handle both walk-ins and walkouts. That includes dealing with the remaining staff workers on site, as well as the needs of parents.

The list of what #RedForEd wants also includes a demand that the state not approve additional tax cuts until teacher pay in Arizona reaches the national average. Ducey has rebuffed that, too, and is promoting his own proposal to cut state income taxes owed on military pensions, a change that eventually will reduce revenues by $15 million a year.

Ducey said his budget plan should be adopted. “I’m on the teachers’ side,” he said, saying he wants to see they get more money in their paychecks. “This is the best and quickest way to get it there.”

The problem of teacher pay is not specifically of Ducey’s making.

He came into office on the tail end of the Great Recession in which lawmakers, looking for ways to balance the budget even as they approved tax cuts, made major slices in state funding, with K-12 education taking a huge hit.

To restore state funding to pre-recession levels, it would take more than getting Arizona back to $4,959 per student: With inflation, that figure is now worth less than $4,200.

Approximately 1,500 protested for an increase in education funding and teacher's pay, chanted, danced and flashed their signs on all four corn…

Pima County schools may have to repay $36 million due to Prop. 123 ruling

Gov. Doug Ducey won't promise to veto new tax cuts, even as he says the state is putting as much money as it can into public education.

"Arizona teacher pay is among the lowest in the country,'' Superintendent Diane Douglas laments.

Would allow those who have served for at least 20 years to exempt $10,000 of their pensions from the state income tax.

A new record high will likely be set today as temperatures climb past the current record high of 95 degrees set on April 11, 1988.

Supervisor for the U.S. Border Patrol killed a woman and her 1-year-old child, then called it into 911 saying he found the bodies on the border

If approved, women would be questioned about the reason for terminating a pregnancy.

If Republicans were serious about reducing abortions in Arizona, they would embrace easily accessible contraception and accurate sex education.

Q&A: How walkout by Arizona teachers is expected to play out

Tens of thousands of Arizona teachers are poised to walk off the job this week to demand more funding for public education, an unprecedented a…

Alphabet continues pulling out of China, shuts down Google Translate

Alphabet continues pulling out of China, shuts down Google Translate

Approximately 1,500 Southern Arizona teachers marched down Congress Street, part of the rally and march for the #RedforEd movement, asking the state for increases in education funding and teacher pay, on April 4, 2018.

Gov. Doug Ducey at a January news conference with Republican legislators and some school officials announcing his plan to start restoring money the state took from schools during the recession. 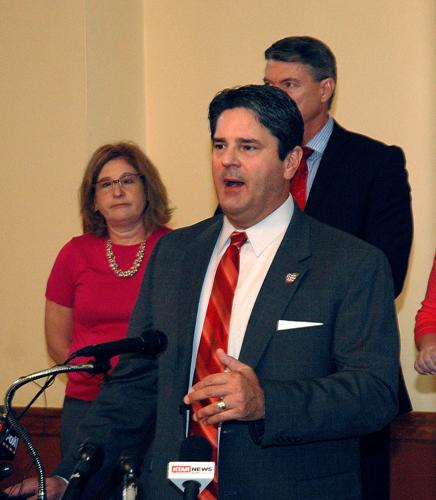