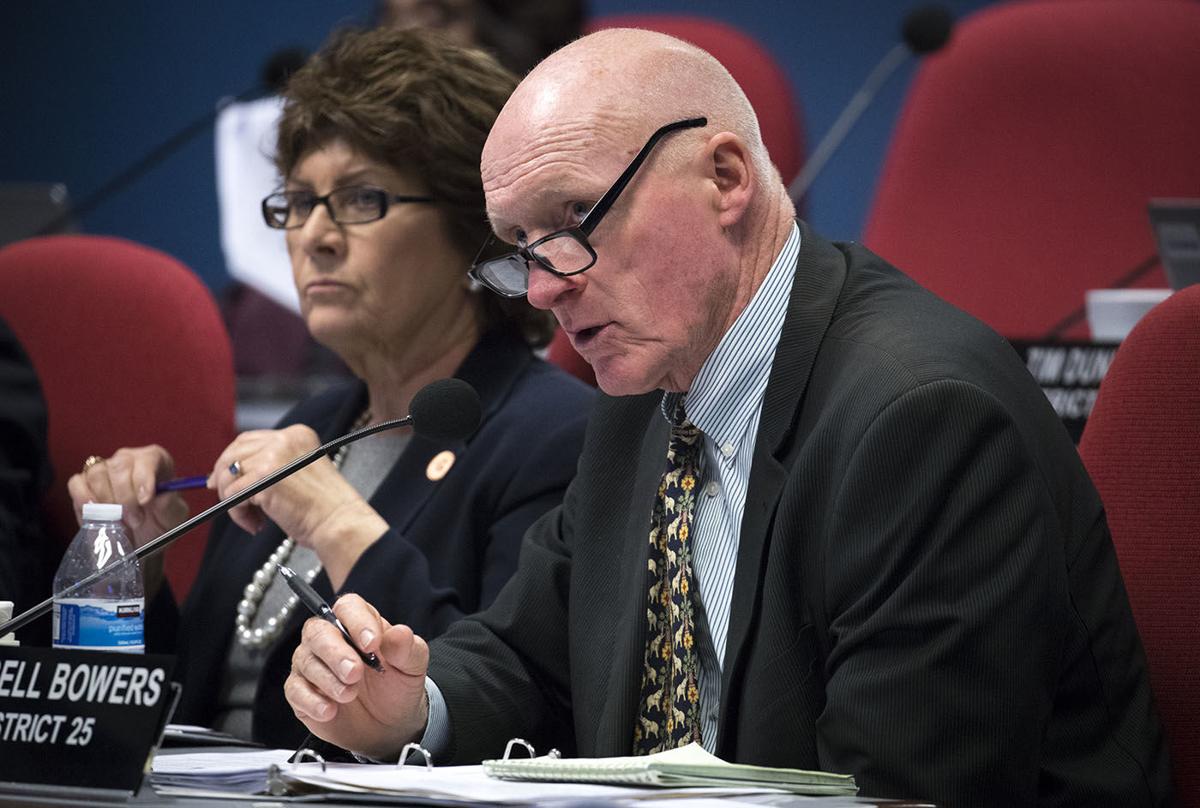 Rep. Rusty Bowers asks a question during a Committee on Natural Resources, Energy and Water hearing on HB 2545. 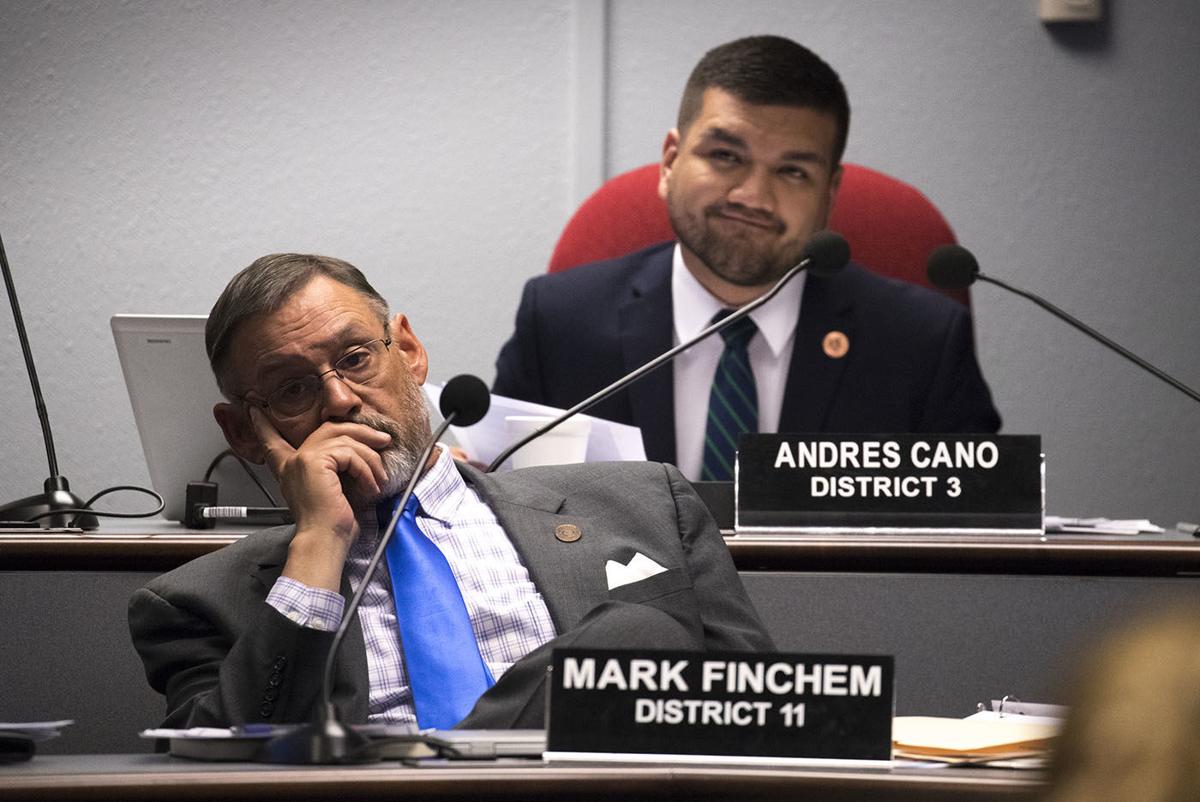 Rep. Mark Finchem (front) and Rep. Andres Cano listen during a hearing on HB 2540, January 29, 2019, in the Arizona House of Representatives Committee on Natural Resources, Energy and Water at the Arizona State Capital. 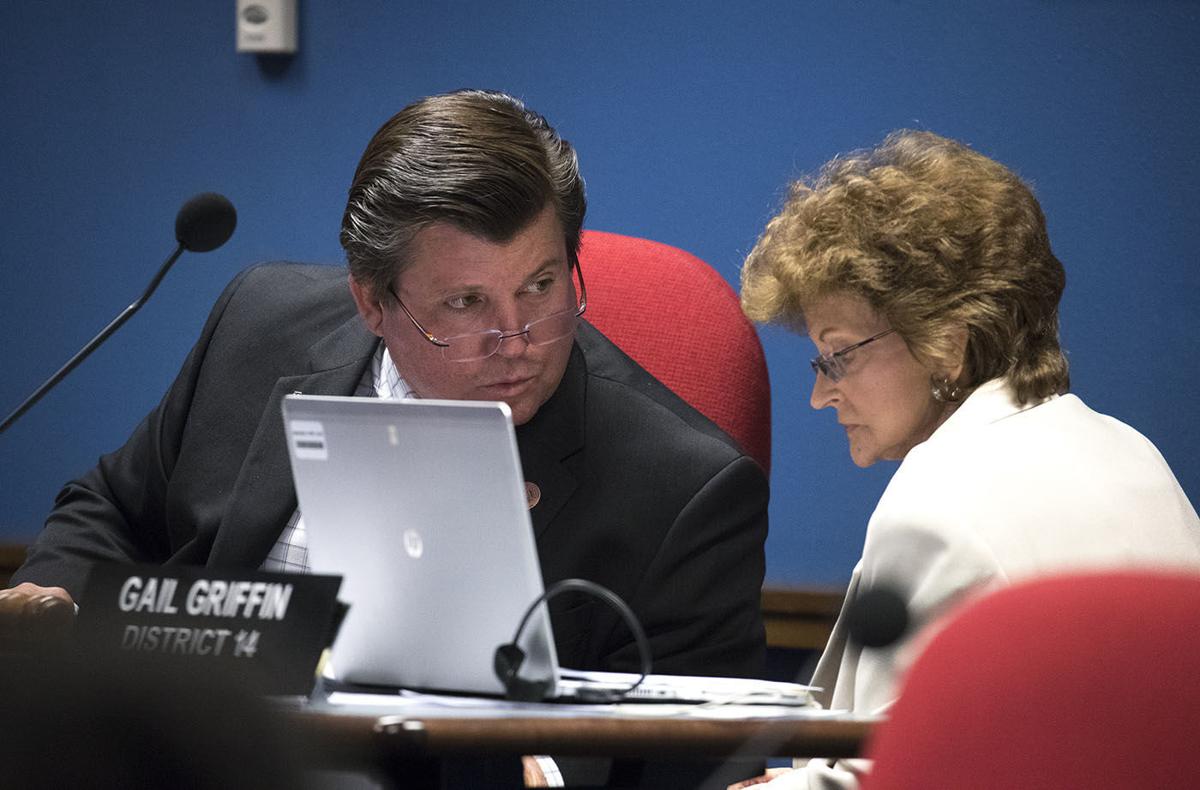 Rep. Timothy M. Dunn (left, vice-chair) talks with Rep. Gail Griffin (chair) during a hearing on HB 2540, January 29, 2019, in the Arizona House of Representatives Committee on Natural Resources, Energy and Water at the Arizona State Capital. 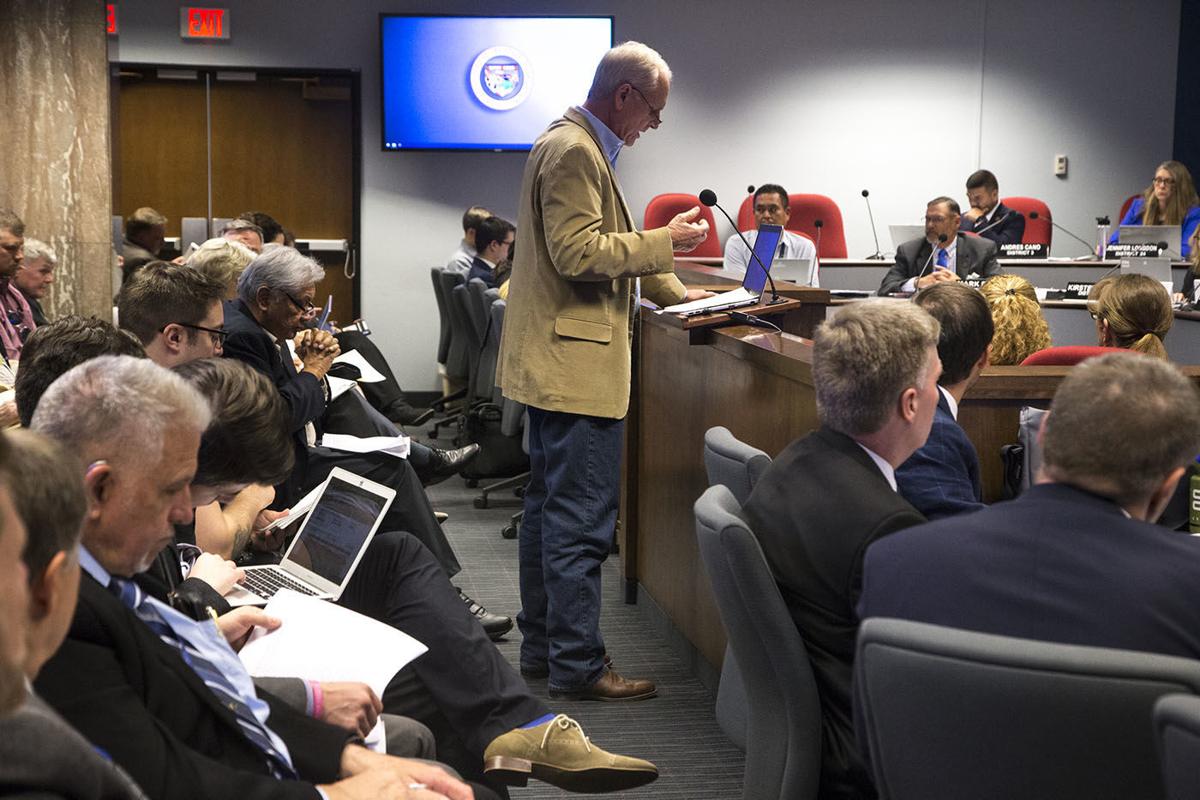 Pinal County farmer Dan Thelander (center) speaks during a hearing on HB 2540, January 29, 2019, in the Arizona House of Representatives Committee on Natural Resources, Energy and Water at the Arizona State Capital.

PHOENIX — Facing a Thursday deadline, state lawmakers took the first steps Tuesday night toward approving the details of a drought-contingency plan to deal with the fact Arizona will lose some of the water it now gets from the Colorado River.

The package was unanimously approved by the House Committee on Natural Resources, Energy and Water and now goes to the full House. It provides even more money to Pinal County farmers to help keep agriculture alive over what had been agreed to before.

The original plan called for giving the farmers $5 million in state tax dollars to drill new wells and construct delivery systems to replace the river water they will no longer get. But HB 2545 increases that to $9 million. On top of that, the state will put up another $20 million toward the cost of getting more groundwater for those farmers.

That $20 million is money the farmers are hoping eventually to get from the federal government. But Patrick Bray of the Arizona Farm and Ranch Group told lawmakers that farmers are not sure when those dollars will be coming through, if at all.

He called the state dollars a “backstop” for those federal funds and a “line of credit” until the federal money comes through.

But Sandy Bahr, director of the Grand Canyon chapter of the Sierra Club, said lawmakers were looking at the whole issue the wrong way, particularly with their focus in trying to sustain farming in Pinal County through pumping more groundwater.

“Today we have an opportunity to move down a more sustainable path regarding our water future,” she told lawmakers. “Unfortunately, that’s not what we’re doing,” Bahr said, saying much of the drought contingency plan is designed “to appeal to a few interests.”

Bahr said it’s not like everyone didn’t know the amount of water the state could draw from the Colorado River was going to be cut. (See related story, Page C1.)

The farmers and their allies defended seeking additional funds beyond the original deal, insisting it’s not just about them — or even preserving the tax base of Pinal County, whose economy is heavily dependent on agriculture.

Tiffany Shedd, whose family owns a cotton farm, said the rest of the state owes the farmers a debt of sorts.

She said the farmers took Colorado River water — ensuring the state got its share — in the years before the cities were equipped to start using it. Shedd said the farmers also gave up water to help settle a water lawsuit with the Gila River Indian Community, water the tribe is now able to pledge to help make up for what will not come from the river.

And she said one reason members of the California congressional delegation agreed to vote to provide funds to construct the Central Arizona Project to deliver water was that the farmers agreed to give up claims to groundwater.

Shedd also said what happens in Pinal County affects the rest of the state, saying it supplies 53 percent of the beef consumed in the Tucson and Phoenix areas and 40 percent of the milk.

Chelsea McGuire of the Arizona Farm Bureau Federation sought to put a finer financial point on it.

She said if the ranchers and dairy operators can’t get their feed from local farmers, they’ll have to import it from somewhere else, at a higher cost that will be passed on.

“It’s going to be the folks in the grocery store, the consumer, looking to buy that steak,” McGuire said.

“It’s not going to be $4 a pound at Safeway anymore,” she said. “It’s going to be significantly more than that.”

At the heart of the plan is the fact that Lake Mead is expected to drop below 1,075 feet above sea level by 2020. At that point, the amount of water that can be taken out of it, whether directly or further downstream through the CAP, will automatically be reduced.

The drought-contingency plan is designed to both divide water among the states using the river water as well as determine how Arizona’s portion of those cuts will be shared among various users.

All the other states have agreed to the plan, leaving Arizona, which is the only state where legislative approval is required.

Time is an issue because Brenda Burman, commissioner of the U.S. Bureau of Reclamation, has said if there is no deal by Thursday she will begin the process of coming up with her own plan to divvy up the water. And the belief is that Arizona, which is a junior partner in existing agreements, would lose far more water than the 700,000 acre-feet over the seven-year period proposed in the multi-state drought plan.

One element of the plan provides 595,000 acre-feet of water to Pinal farmers over that same period. An acre-foot is the amount of water used by two typical families over the course of a year.

Bahr complained the plan is just a stopgap measure, dealing with how the state will divide up the available water only through 2026 — and doing it by allowing farmers to pump more water out of the ground despite a history of subsidence from prior pumping.

“And now the state is going to pay for more of that to happen,” she said.

Rep. Rosanna Gabaldón, D-Green Valley, also questioned the issue of how water is being used.

“Our water supply is very finite,” she said. And Gabaldón said Pinal farmers knew that the amount of water they have been using was not going to be there forever.

“But what they knew is that was going to happen in 2030, not in 2020,” she continued, saying that was based on prior agreements. “So unless we had a crystal ball, unless we had a time machine that we could come to this day and realize we would be having these conversations, there’s nothing anybody could have done to prepare for this precise scenario.”

The money to help provide more groundwater to Pinal farmers is only part of the package up for legislative debate.

Another piece sets aside an additional $30 million in state funds to essentially buy 150,000 acre-feet of water from the Colorado River Indian Tribe, which will leave it instead in Lake Mead. That is designed to keep it from declining any further and triggering an even more severe shortage that would result in more cutbacks. And there also are changes in law about who gets long-term credits for future water for what is put into the ground now and for effluent from sewage-treatment plants.

The Senate also has to approve the plan and it is expected to begin discussions on it Wednesday, Jan. 30.

The woman said one of the home invaders punched her while taking some of the jewelry she wore.

Tucson weather: Rain a day away

Rain is still headed for Tucson beginning Thursday night and getting heavier through the weekend. High-elevation snow is also in store.

Tyson recalls chicken nuggets over reports of rubber inside

Love Chick-fil-A? Love 'em enough to camp out and be first in line for the grand opening of Tucson's newest location?

Opponents argue that raising the minimum for liability insurance could result in some motorists not purchasing coverage at all.

Senate Bill 1255 would provide a seven-year window to bring a civil claim to court. Current law has a two-year statute of limitations.

Irvington Rd at I-19 overpass reopened after serious pedestrian collision

A man suffered life-threatening injuries when hit by a vehicle on Tucson's southwest side Wednesday night, police say.

Rep. Rusty Bowers asks a question during a Committee on Natural Resources, Energy and Water hearing on HB 2545.

Rep. Mark Finchem (front) and Rep. Andres Cano listen during a hearing on HB 2540, January 29, 2019, in the Arizona House of Representatives Committee on Natural Resources, Energy and Water at the Arizona State Capital.

Rep. Timothy M. Dunn (left, vice-chair) talks with Rep. Gail Griffin (chair) during a hearing on HB 2540, January 29, 2019, in the Arizona House of Representatives Committee on Natural Resources, Energy and Water at the Arizona State Capital.

Pinal County farmer Dan Thelander (center) speaks during a hearing on HB 2540, January 29, 2019, in the Arizona House of Representatives Committee on Natural Resources, Energy and Water at the Arizona State Capital.