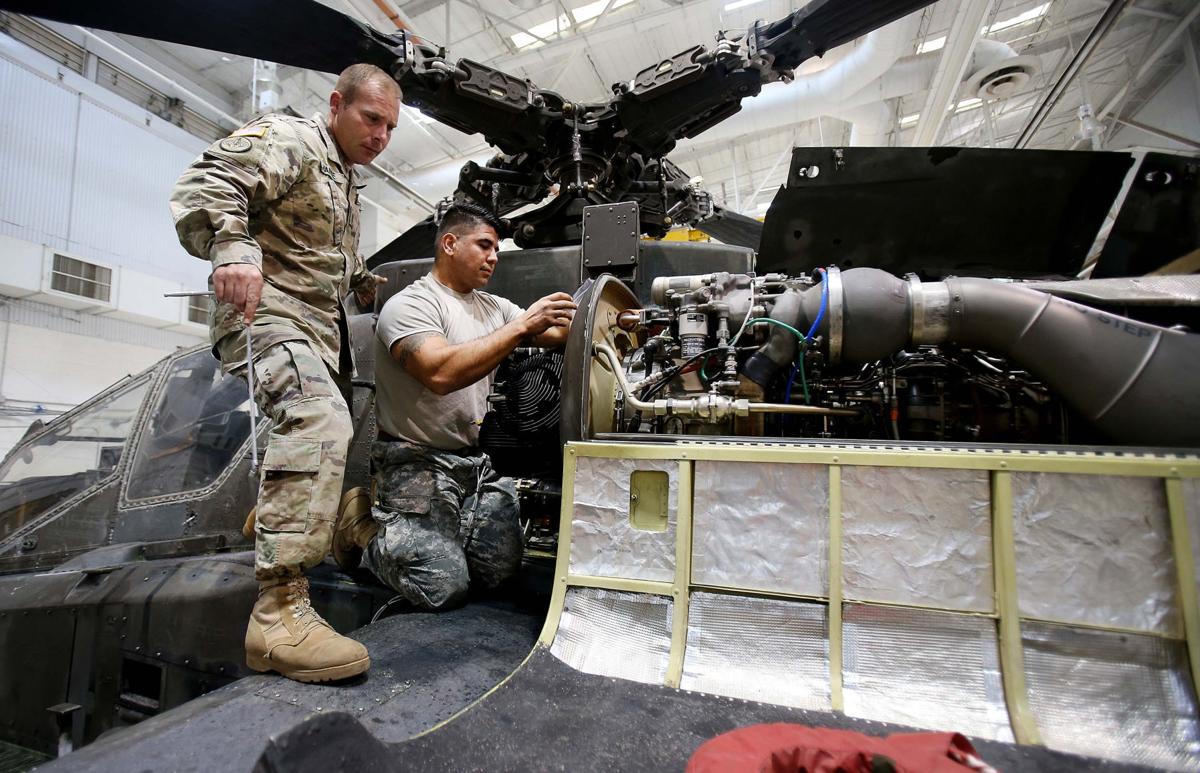 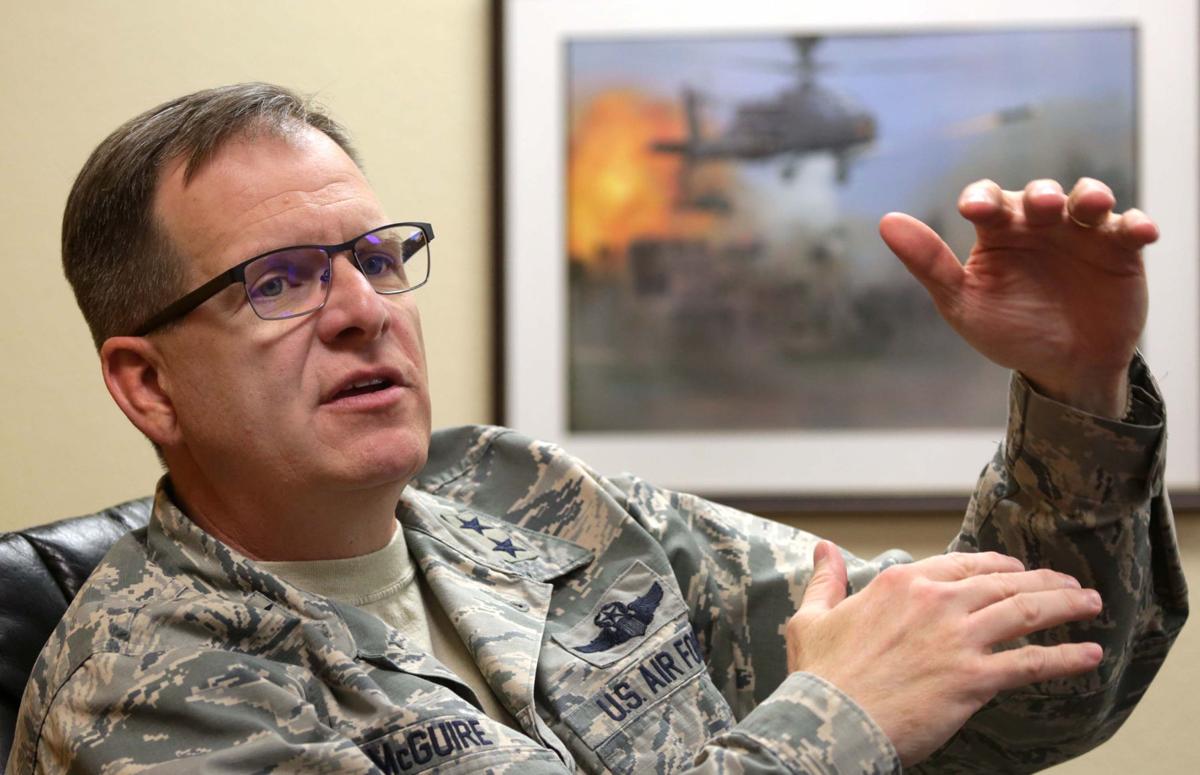 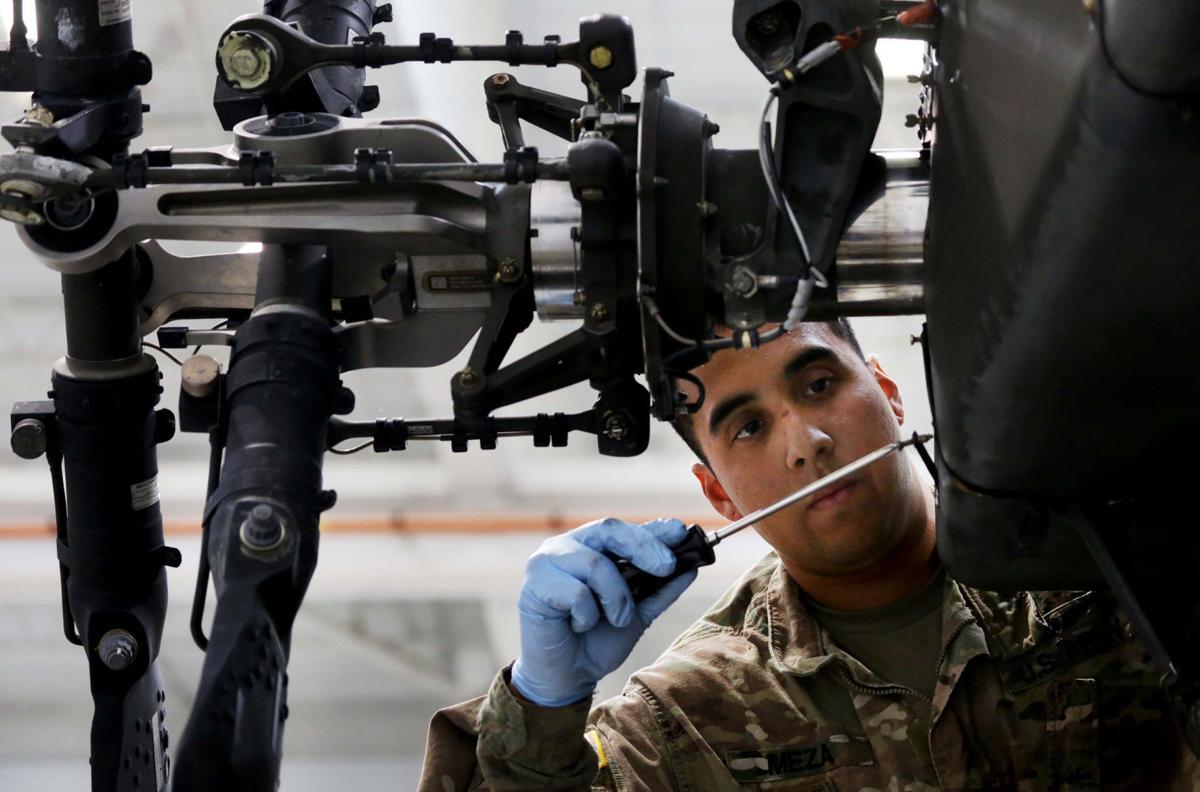 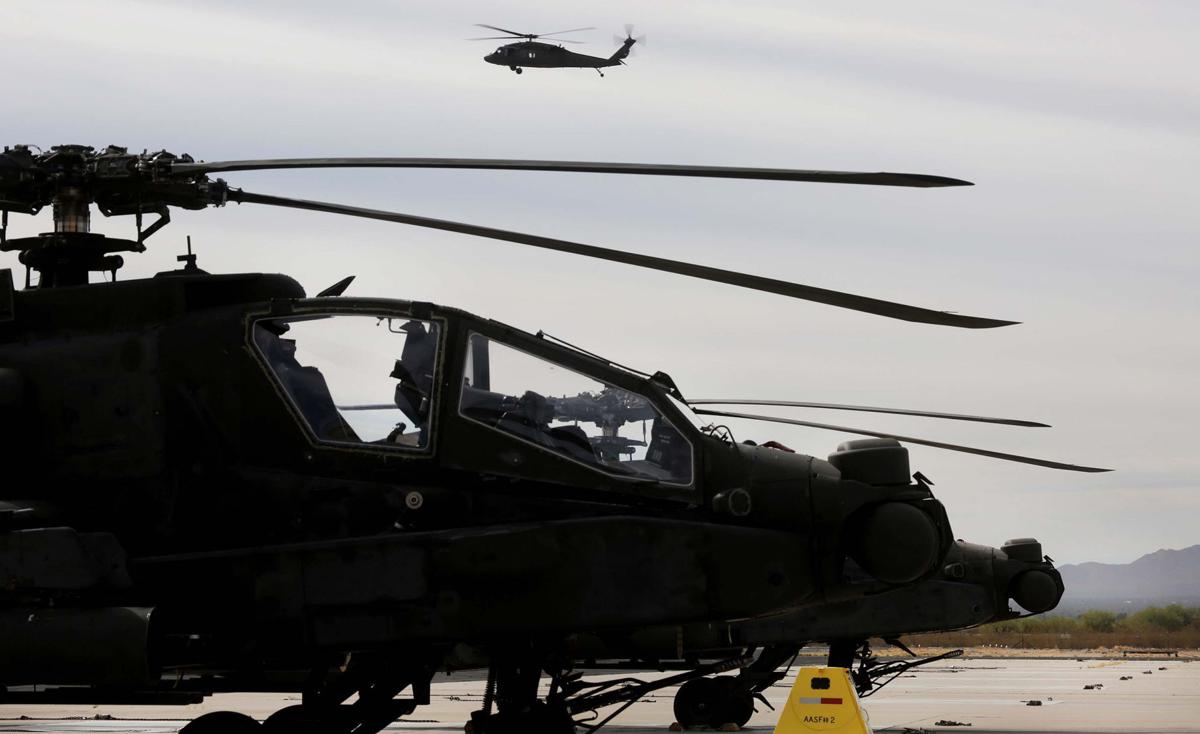 A military plan calls for the disbanding of an Army National Guard helicopter battalion in Marana by the end of the year.

The chief of the Arizona National Guard is mounting a last-ditch effort to save Apache attack-helicopter training at the Silverbell Army Heliport near Marana, as the Army moves to transfer most of the Guard’s Apaches to active-duty units.

The plan could cut hundreds of soldiers from the already diminished AH-64 Apache combat unit at Silverbell, which together with other units contributes an estimated $147.4 million annually to the local economy, according to a recent report.

After initially proposing to swap out all of the Guard Apaches for less-capable UH-60 Black Hawks, the Army is now planning to retain four Apache attack battalions in the Guard, with a decision on where those units will be based due from the Army chief of staff in the near future.

The adjutant general of the Arizona National Guard, Air Force Maj. Gen. Michael T. McGuire, says he’s concerned about the potential loss of the 400-member Apache combat unit at Silverbell, the 1st/285th Attack Reconnaissance Battalion, and its impact on the region.

But McGuire said his main worry is that the Army’s plan to cut the number of Apache attack units in the Guard to just four battalions — with 18 aircraft each, compared with the normal complement of 24 — is “unsustainable” and will waste the skills of hundreds of trained aviators, maintainers and support personnel.

“I see that the nation now needs every available Apache aviator based on the current threat environment,” said McGuire.

The Army initially had planned to transfer all 192 of the Army Guard’s Apaches to active-duty units, in exchange for Black Hawks, but Congress in 2015 required the service to study the issue further.

In January 2016, the Guard’s Apache units got a reprieve of sorts when the Commission on the Future of the Army recommended that the Army keep four battalions of 18 Apaches each in the Guard.

But with high demand, required maintenance rotations and the need for 24 Apaches for each deployed combat battalion — which will apparently require deployed units to borrow helicopters from non-deployed units — the Guard’s attack capabilities and readiness will quickly erode, McGuire said.

“We’re signing up for a program that essentially delays the inevitable, which is the removal of all attack aviation from the guard,” he said.

McGuire was part of a panel of nine state National Guard adjutant generals appointed by Army Chief of Staff Mark A. Milley last year to reach a consensus on a Guard Apache stationing plan.

The panel voted 7-2 to back the four-battalion plan, with Arizona’s McGuire dissenting along with the adjutant general of Pennsylvania, home to another Apache training center.

In a dissent letter to Milley in July, McGuire said the plan will risk attack-aviation readiness and recommended that the Guard keep a total of six Apache battalions, instead of four.

McGuire also recommended that the Army reactivate Apache training at the Western Army Aviation Training Center (WAATS) at the Silverbell Heliport. Apache flight and maintenance training were discontinued at WAATS a few years ago, and the center now trains on the Black Hawk and Lakota scout helicopter.

The Guard’s Apache training should be expanded, not cut, to address a worsening shortage of pilots due to retirements and departures for civilian pilot jobs, McGuire said.

“I think now more than ever, we need to consider turning that pipeline back on, because the threats that face the nation today are going to require that second pipe,” he said.

In March, Director of Army Aviation Maj. Gen. Erik C. Peterson told a congressional subcommittee the service had accumulated a shortage of 731 active-duty aviation warrant officers from 2010 to 2017. Most Army pilots are warrant officers.

America’s allies need more Apache training, too, McGuire noted. The Silverbell Heliport has been used for an Apache training program for the Republic of Singapore, and foreign nations including India and Saudi Arabia have stepped up their Apache purchases.

The Army already has withdrawn scores of the helicopters from Guard units including the 1st/285th at Silverbell.

The attack battalion has already lost all but four of its former fleet of 20 Apaches, and unless Silverbell is picked as one of the Guard Apache battalion sites, the unit faces possible deactivation.

Under the the Army’s original Aviation Restructuring Initiative, 70 of the 1st/285th’s personnel including 20 pilots were to be shifted to a unit with seven Black Hawks and three UH-72A Lakota light utility helos.

The battalion’s more than 300 other members would be transferred to non-aviation units in transportation, logistics and military police. McGuire says it would be foolhardy to jettison skilled Apache pilots and maintenance crews when both the Guard and the active-duty Army are facing personnel shortfalls.

“Active Army is suffering the same exodus, and so what I keep telling them is, let’s not make a decision that’s irreversible,” McGuire said. “If you fully divest this battalion of people now and retrain them as truck drivers, and logisticians or infantry members, I think it’s going to be a hard narrative to explain that to the American people in the current threat environment.”

“They don’t grow on trees, and no matter how much money you pour on it, you can’t replace those 400 overnight,” he added.

A defense analyst said all the military services with flying units, including the National Guard, are facing shortages of pilots.

“The military is hemorrhaging pilots because of demand from commercial airlines and business-jet operators,” said Loren Thompson, chief operating officer of The Lexington Institute, a non-profit think tank based in Arlington, Virginia.

“The Apache is the most capable attack helicopter in the world, and it takes a fair amount of time to train people up,” Thompson added. “And once you let these training organizations disband, you may never get them back.”

Army Guard aviators train and fight just like active-duty units. The 1st/285th Attack Reconnaissance Battalion was deployed to Afghanistan in support of Operation Enduring Freedom in 2007 and in 2012.

Despite the loss of most of its Apaches, the 1st/285th Attack Reconnaissance Battalion has maintained readiness, flying remaining rotorcraft two or sometimes three times a day, McGuire said. The 1st/285th’s 402 authorized personnel include 68 pilots.

“We’ve been doing everything in our power to keep them on life support, to keep them qualified,” McGuire said. “My trump card in this negotiation has been to try and corner the market on the combat capability and capacity that we have.”

McGuire and local military supporters have been lobbying Sen. John McCain and the rest of the Arizona congressional delegation to save the Apaches at Silverbell.

Amber Smith, chair of the Southern Arizona Defense Alliance, said her group has met with McCain, Rep. Martha McSally, Sen. Jeff Flake and other delegation members and went on a tour of Silverbell with Army officials in September.

Smith, CEO of the Metropolitan Pima Alliance, said cuts to Army aviation units at Silverbell could cost the area hundreds of jobs, but bigger things are at stake.

With the presence of Davis-Monthan Air Force Base and Southern Arizona’s vast aerial gunnery ranges, Smith said, the area offers year-round opportunities for Apaches to train with fixed-wing planes such as D-M’s A-10 Thunderbolt II ground-attack jets.

“You can’t underestimate the importance of that kind of training,” she said.

McCain, Chairman of the Senate Armed Services Committee, has expressed concerns over the Apache withdrawals from the National Guard to Army Chief of Staff Milley, an aide said.

“As the threat and budget environment has changed since the initiation of the Aviation Restructuring Initiative and the National Commission on the Future of the Army, Senator McCain has urged the Chief of Staff of the Army to make a decision that is in the best interests of U.S. national security and that does not disproportionality degrade pilot training or the overall readiness of our National Guard,” McCain spokeswoman Julie Tarallo said in an email.

A spokeswoman for the Army said information on the timing of a basing decision for the remaining Guard Apaches was not immediately available.

Thompson said the root cause of the Apache dilemma was the Army’s failure to develop a new light-scout helicopter as the Kiowa was headed for retirement, prompting the Army to look to use Apaches to fill the scouting role.

“That is not a great plan,” he said. It would make much more sense to develop a new scout helicopeter and leave the Apaches where they are but the Army is very strapped for money.”

The bill requires the Air Force to maintain at least 171 combat-ready "Warthogs."

Arizona lawmakers make another pitch to save National Guard Apaches

Two A-10 pilots from Davis-Monthan Air Force Base have been recognized for protecting Army forces fighting the Islamic State.

Tucson airport board agrees to new gate for Air Guard base

Morris Air National Guard Base honors Maj. Gen. Donald Morris, who helped found the base at Tucson International Airport in the late 1950s.

A military plan calls for the disbanding of an Army National Guard helicopter battalion in Marana by the end of the year.