The state’s top school official is trying to downplay — and in some cases remove entirely — references to evolution in the science standards of what students are supposed to be taught in Arizona high schools.

Superintendent of Public Instruction Diane Douglas is proposing to eliminate requirements that students be able to evaluate how inherited traits in a population can lead to evolution. Instead, she would replace the word “evolution” with “biological diversity.”

Elsewhere, Douglas seeks to repeal language that students develop the understanding of how “adaptations contribute to the process of biological evolution.” Instead, that verbiage would read “how traits within populations change over time.”

And a reference to the “mechanism of biological evolution” would be supplanted with “change in genetic composition of a population over successive generations.”

The word “evolution” would remain in some other places, though it would specifically be referred to as a theory.

But it isn’t just the idea of evolution that’s on Douglas’ hit list.

The standards crafted by a committee previously said students should be able to analyze and interpret “supporting evidence for the Big Bang theory and the scale of the universe.” That verbiage is gone, replaced with the more generic “theories related to the scale and expansion of the universe.”

But Douglas told Capitol Media Services this isn’t her attempt to replace the teaching of evolution with “intelligent design.” That essentially is a theory that life is too complex to have evolved at random and must be the product of some specific design, presumably by a higher power.

“We have absolutely nothing in these standards in reference to intelligent design,” she said.

The changes have drawn particular concern after KPNX-TV in Phoenix unearthed an audio recording of Douglas from last November where she was speaking at an event for Republican candidates.

“Should the theory of intelligent design be taught along with the theory of evolution?” she said in response to a question. “Absolutely,” Douglas said.

Douglas said Monday she was simply giving her personal beliefs on the issue. And she called reports that she is trying to put intelligent design into the curriculum “fake news.”

But in those November comments, the school superintendent did not separate her own beliefs from those of what she thinks should be taught in public schools.

“I had a discussion with my staff because we’re currently working on science standards, to make sure this issue was addressed in the standards we’re working on,” Douglas said at the time.

Douglas stressed Monday that the word “evolution” does remain in the standards, at least in several places.

“But we need to look at it from all sides,” she said.

“The point of education is really to be seekers of the truth, whatever the truth may be,” Douglas said. “And that’s what all standards should work toward.”

She acknowledged that the wording changes she wants may open the door to teachers providing students with alternate theories of how life on Earth got to where it is.

“Evolution is a theory in many ways,” Douglas said. “That’s what our children should understand.”

She said there are parts of evolution that are proven science, other elements are “very theoretical.”

“And if we’re going to educate our children instead of just indoctrinate them to one way of thinking, we have to be able to allow them to explore all types of areas,” she said.

So does Douglas believe there’s any scientific basis behind intelligent design?

“Maybe there will be someday,” she responded.

“Once upon a time people said the Earth was flat and it couldn’t possibly be round,” Douglas said. “I don’t know.”

Tory Roberg, lobbyist for the Secular Coalition for Arizona, said her concerns are not assuaged by the fact that Douglas is not proposing to add intelligent design to the standards. She said Douglas clearly realizes she can’t do that, citing federal court rulings that have slapped down schools that have attempted to require the teaching of intelligent design as an unconstitutional effort to put a religious belief into a classroom.

Still, Roberg, who has children in the Washington Elementary School District, said what Douglas is proposing is still wrong.

But author Ed Reitz had a different take on it when he spoke at a hearing last month.

“The teaching of evolution is something that concerns me because it’s a theory and it’s not science,” he said.

Reitz said his new book, “America’s Last Chance: Where Hope Lives,” with a picture of a boy on the cover praying next to a cross and U.S. flag, devotes an entire chapter to the issue of evolution and humans descending from previously existing vertebrates.

“In the first place, it is illogical,” Reitz testified. “When we observe nature, our natural instincts tell us there was design and planning somewhere.”

And Reitz said if schools would teach creationism, there would not be the need for vouchers that let parents use taxpayer dollars to send their children to private and parochial schools which do not have to follow the standards for teaching science that govern public schools.

“We want creation taught in schools and God brought back in,” he said.

“We support the teaching of the scientific theory of evolution in the schools,” he said.

“Scientific standards should be based on scientific research and nothing else.”

And Thomas said this is more than a question of standards.

“It risks Arizona students falling behind the rest of the nation and world if we start watering down our education standards,” he said.

Thomas also said he was skeptical about Douglas’ claim that there are other valid theories that should be taught in schools.

“If there are other theories that exist, the science that has escaped the science community, the superintendent should bring those to the forefront,” he said.

Any changes to the science standards ultimately have to be approved by the Arizona State Board of Education.

The new standards, including the changes proposed by Douglas in green, are at: tinyurl.com/azsciencestandards

Public comments on the proposal are being accepted through May 28 at tinyurl.com/azstandardsfeedback

At TUSD, teachers won't get the whole 9% raise #RedForEd got in Arizona budget

Tucson Unified School District Superintendent Gabriel Trujillo says he expects to spread that money around to all “educators” who touch the lives of children — even the janitors.

Gov. Ducey disses TUSD plan to spread raises for teachers to other staffers

The governor says raises sought by #RedForEd and approved by state lawmakers were intended for teachers, not support staff.

The effort by State Superintendent of Public Instruction Diane Douglas is attempting to blur the line between science and religion in what Arizona students are taught in public schools.

Alvernon Park will remain name but with dedication to Officer Jeffrey H. Ross.

I look from outside at Arizona now, having lived there a number of years. I'm sad that the drive for power and control has grown more evident …

Three of five candidates want theory taught in school, but not necessarily in science classes.

Four Republicans are challenging Diane Douglas in the Aug. 28 primary.

The two contenders for state schools chief found one key agreement in a debate Thursday: Both oppose Proposition 305.

The board rebuffed a bid by schools chief Diane Douglas to adopt standards for public schools crafted by a Christian college for Arizona. 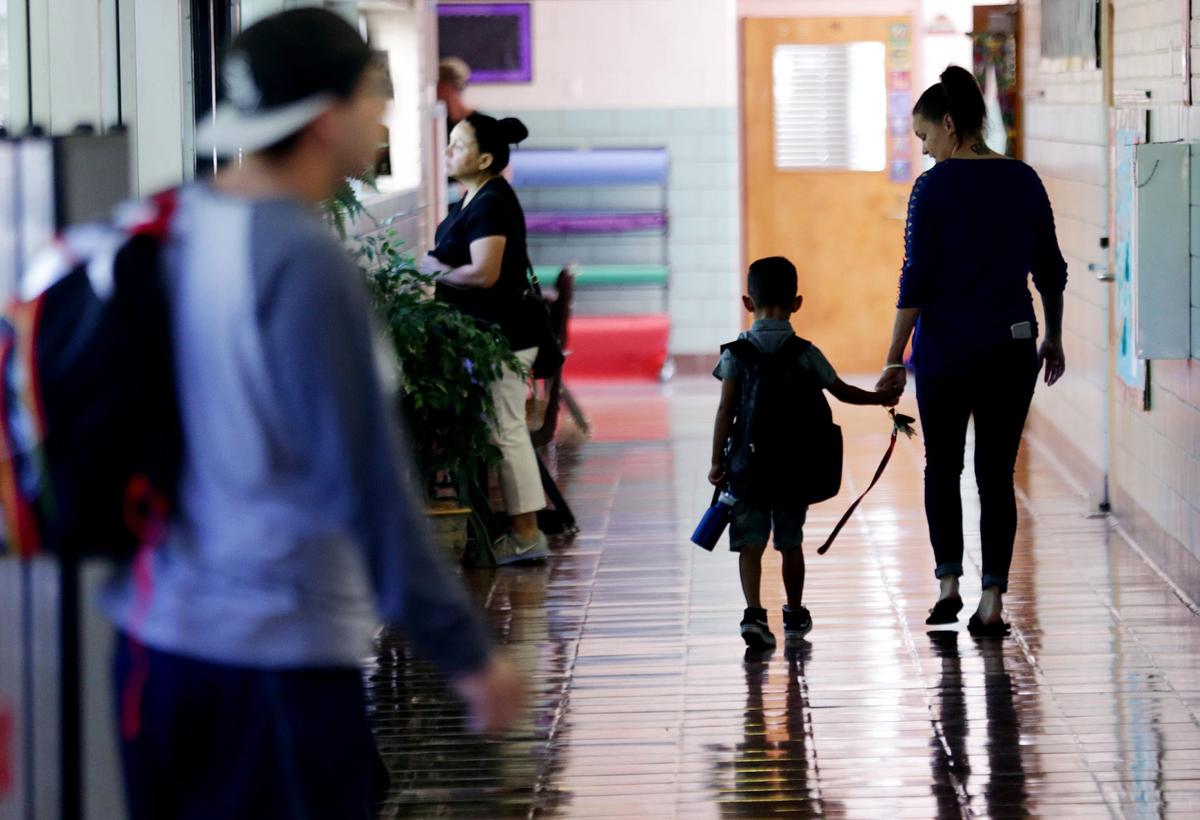 A student is walked to class on the first day back to school for students in the Tucson Unified School District at Peter Howell Elementary School, 401 N. Irving Ave., on Aug. 3, 2017, in Tucson, Ariz. Around 350 students enrolled for the school year at Peter Howell. 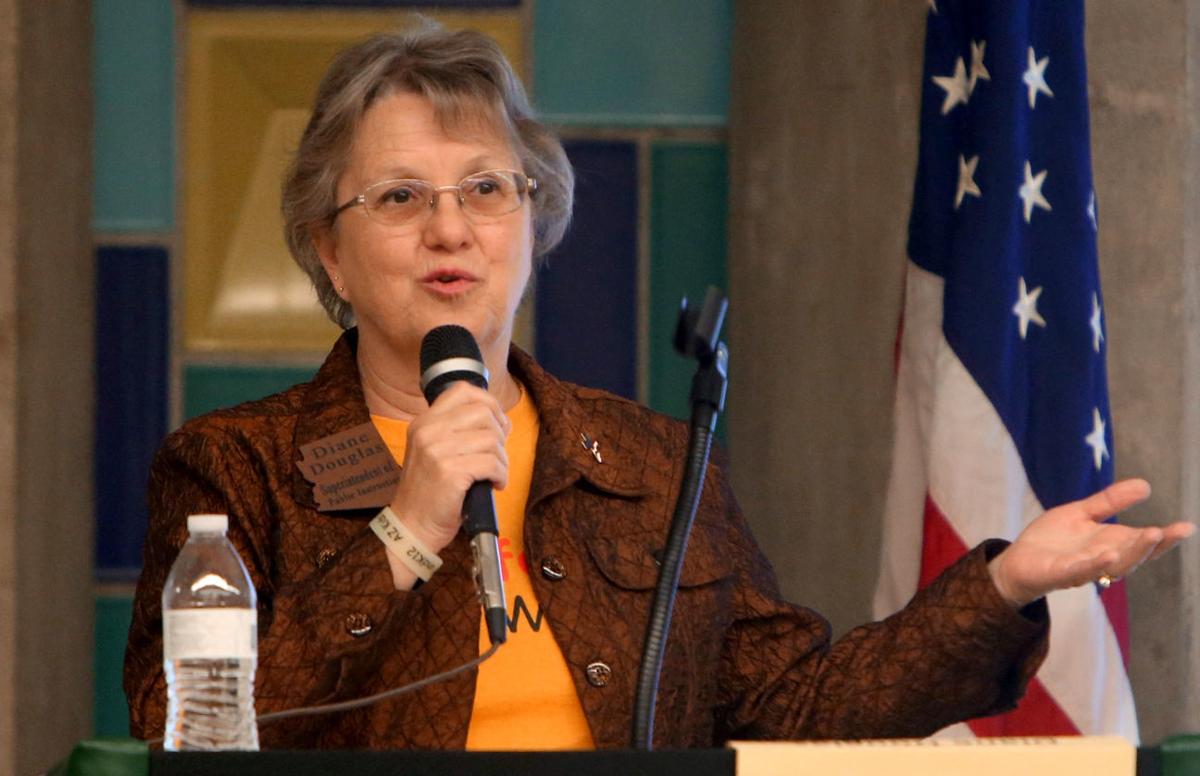