Arizona sees increase of aggressive bees
Share this
1 of 2 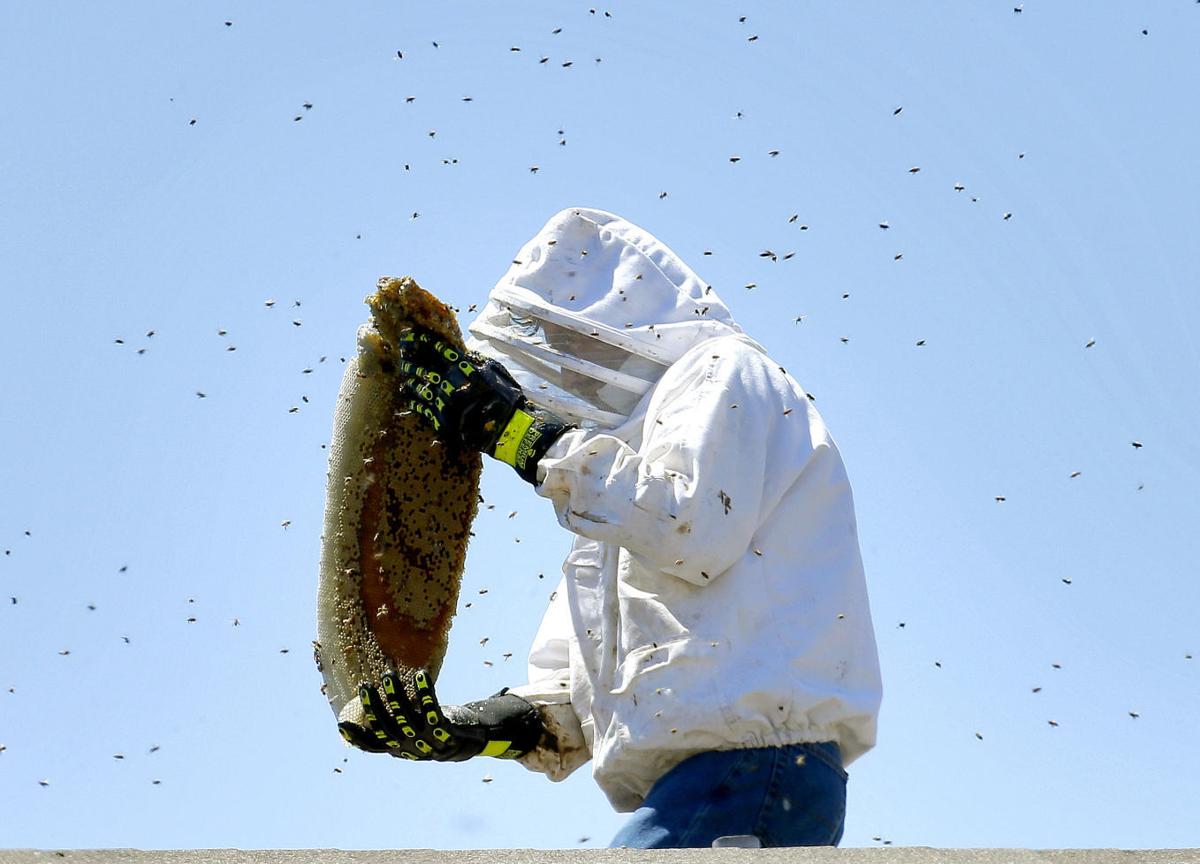 Bee removal expert Jeff Stacey holds a hive taken from a chimney Friday in Phoenix. Bee swarms have killed three dogs in Arizona in the past week. 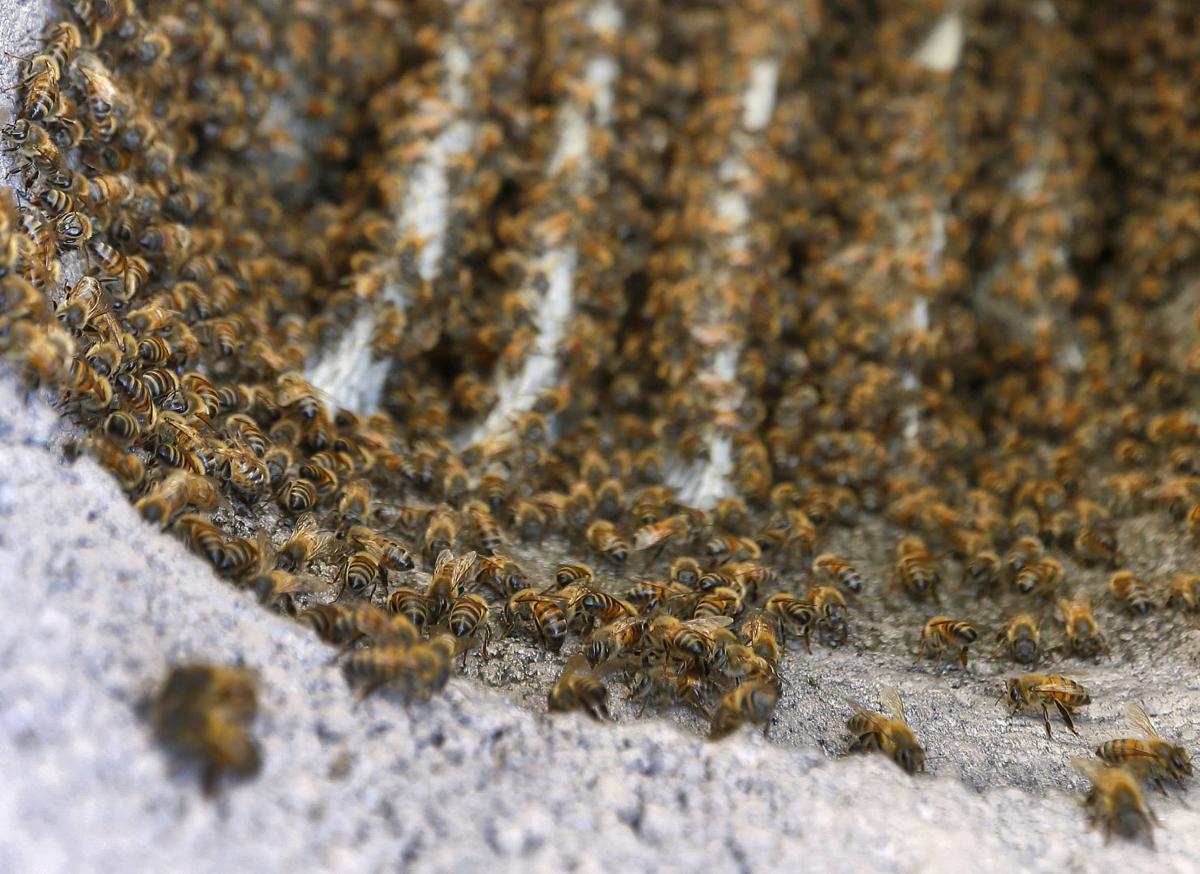 By Yara Bishara The Associated Press

PHOENIX — A particularly aggressive strain of honeybee has been menacing parts of Arizona in recent weeks, with some people getting stung so many times that they’ve been hospitalized.

In the past week alone, an 84-year-old man from Oro Valley was stung more than 2,000 times in his backyard. Three dogs have been killed. And beekeepers report an increase in calls to remove hives and bee swarms.

Some answers to common questions about the bee attacks:

WHAT KIND OF BEES ARE ATTACKING?

Experts point to the Africanized honeybee, also known as the killer bee, which is a cross-breed between the European honeybee and the African honeybee, according to Reed Booth, who runs a bee-removal business in Bisbee.

The killer bee is the result of experiments in Brazil decades ago, and the insects migrated to the U.S. The bees are more prevalent in warm Southwestern states such as Arizona, New Mexico and Texas. If their hives are disrupted, they become especially aggressive.

WHAT IS A NORMAL BEE SEASON?

In a normal year, bee season runs from mid-March through late October, but it often depends on the weather.

The Phoenix Fire Department has responded to 58 bee calls in the metropolitan area since the start of 2014, including 17 this year, Capt. Aaron Ernsberger said.

Elaine Stacey, who co-owns a bee-removal service in Phoenix, has also noticed an increase in Africanized honeybees in Arizona, especially in the spring.

Booth could not pinpoint an exact reason for the increase, but he believes the change is due to the wet, warm winter Arizona experienced this year.

WHAT CAUSES THEM TO ATTACK?

The bees are constantly on guard for possible threats to the hive. They could perceive the color of a shirt or the scent of cologne as threatening, Booth said. It doesn’t take much to provoke them.

“They hate any movement, noise, or vibration,” Booth said. “They hate everything.”

Booth said he has also witnessed a behavioral shift in the Africanized honeybee, with their aggressiveness going “through the roof.”

HOW FEROCIOUS ARE THE BEES?

An 84-year-old Oro Valley man survived after being stung by more than 2,000 bees in his backyard. Booth said 500 stings are the equivalent of one rattlesnake bite.

In Arizona, signs along popular hiking trails warn about the dangers of bee hives. Spring training baseball games are sometimes disrupted by swarms of bees, and pets sometimes fall victim to the attacks.

A woman driving through the Phoenix suburb of Peoria this week was swarmed by bees that were disturbed by a landscaping crew. Her dog was killed. A swarm also attacked a person in the Prescott area and killed two other dogs this week.

WHAT CAN PEOPLE DO?

Phoenix fire officials recommend that anyone who encounters bees leave the area, call 911 and notify a beekeeper.

Additionally, people who are allergic to bees should be sure to carry medicine with them, Ernsberger said.

Health officials also advise people who disrupt a beehive to cover their heads, run away and take shelter and not to flail their arms.

No local statistics for bee incidents were available Friday, but Capt. Adam Goldberg, spokesman for the Northwest Fire District, said it’s been a very active bee season for the district's firefighters in terms of how many patients they’ve had to respond to for stings, how many swarms they’ve responded to and the number of hives they’ve had to physically remove because they pose a danger.

Are animals using social distancing to protect themselves from infections?

Fauci: US to spend $3.2B for COVID antiviral pills

Fauci: US to spend $3.2B for COVID antiviral pills

When a bee colony is too close for comfort

A daring Tucson beekeeper shows us how to remove a feral hive — without harming these important pollinators.

Bee removal expert Jeff Stacey holds a hive taken from a chimney Friday in Phoenix. Bee swarms have killed three dogs in Arizona in the past week.