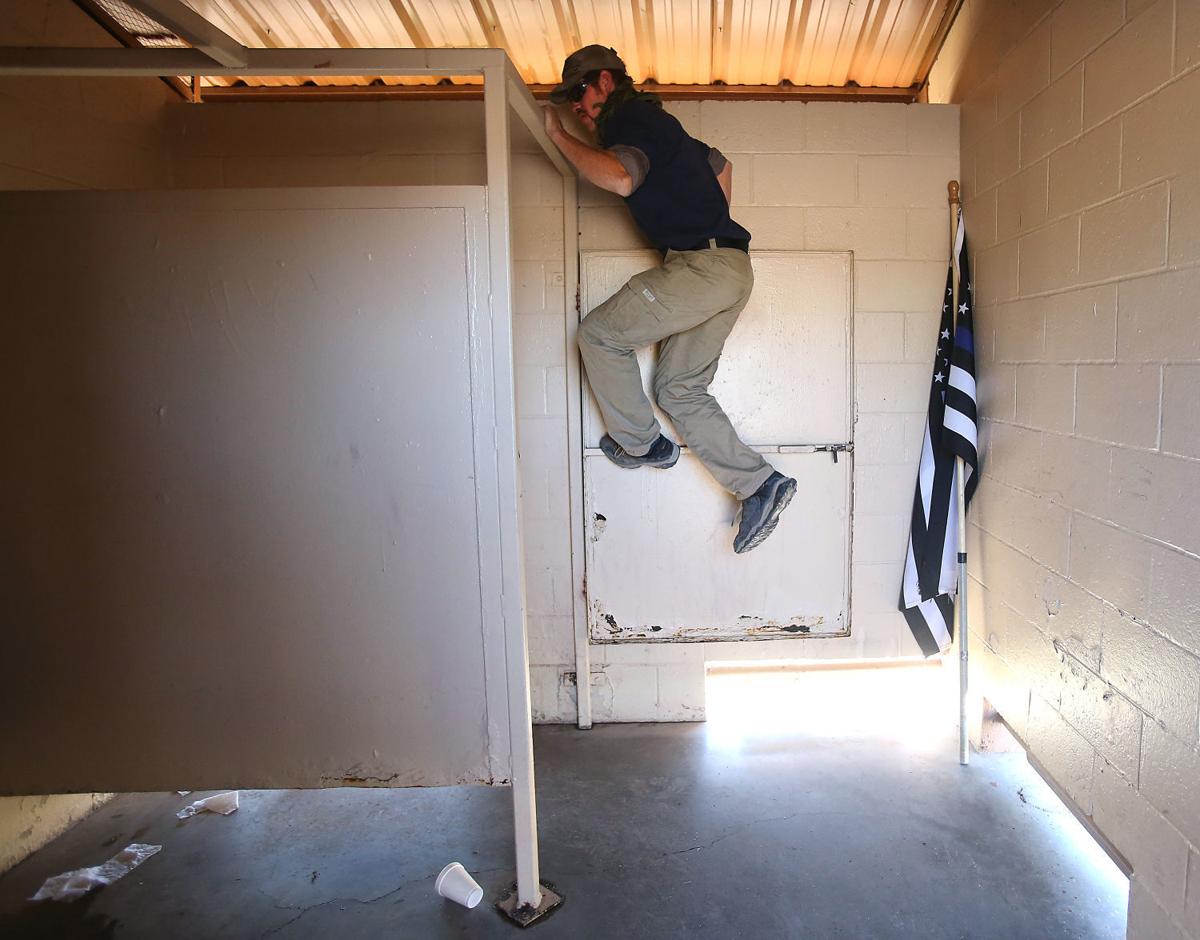 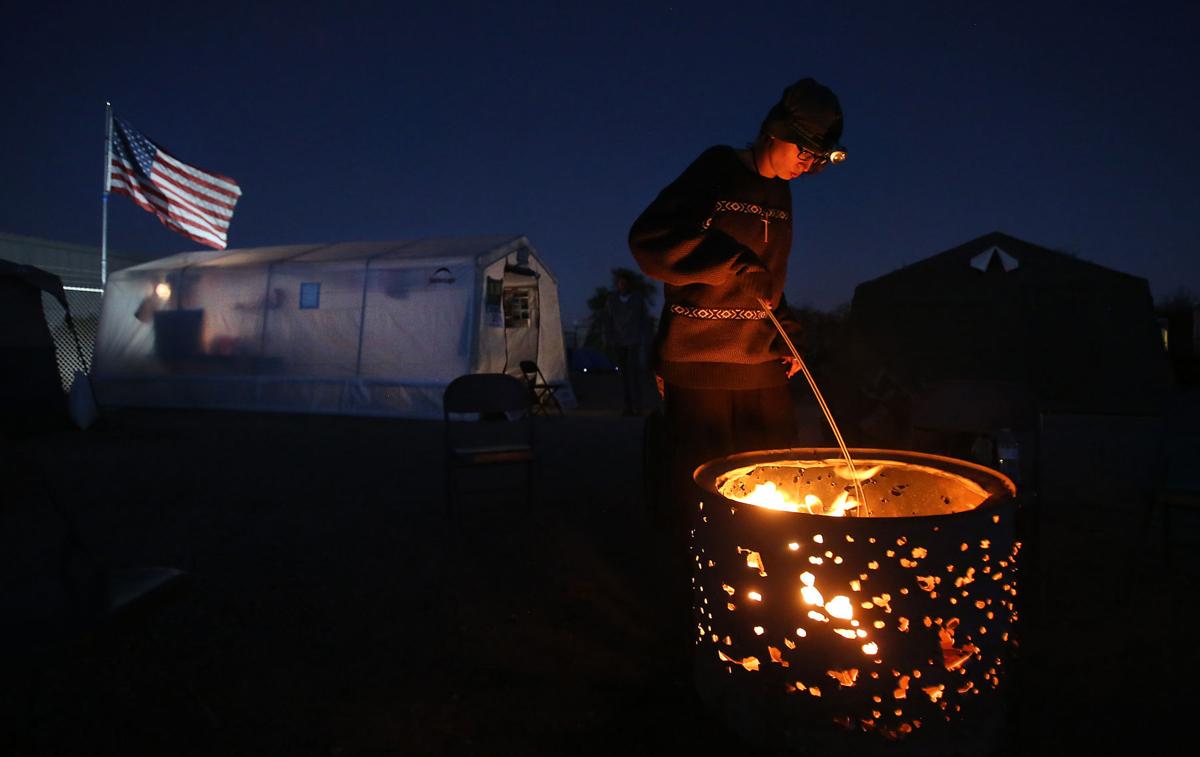 Fae Starling stokes a fire while living at Camp Bravo. Homeless women and veterans at the camp have regular access to free meals, tents and 24-hour security. 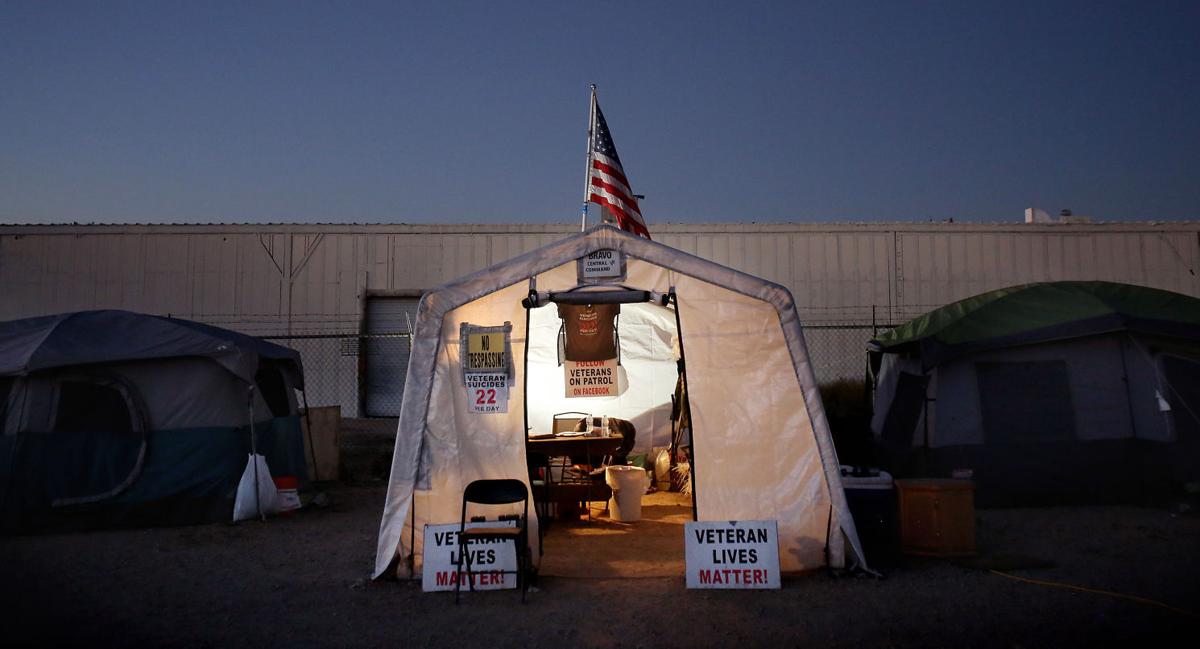 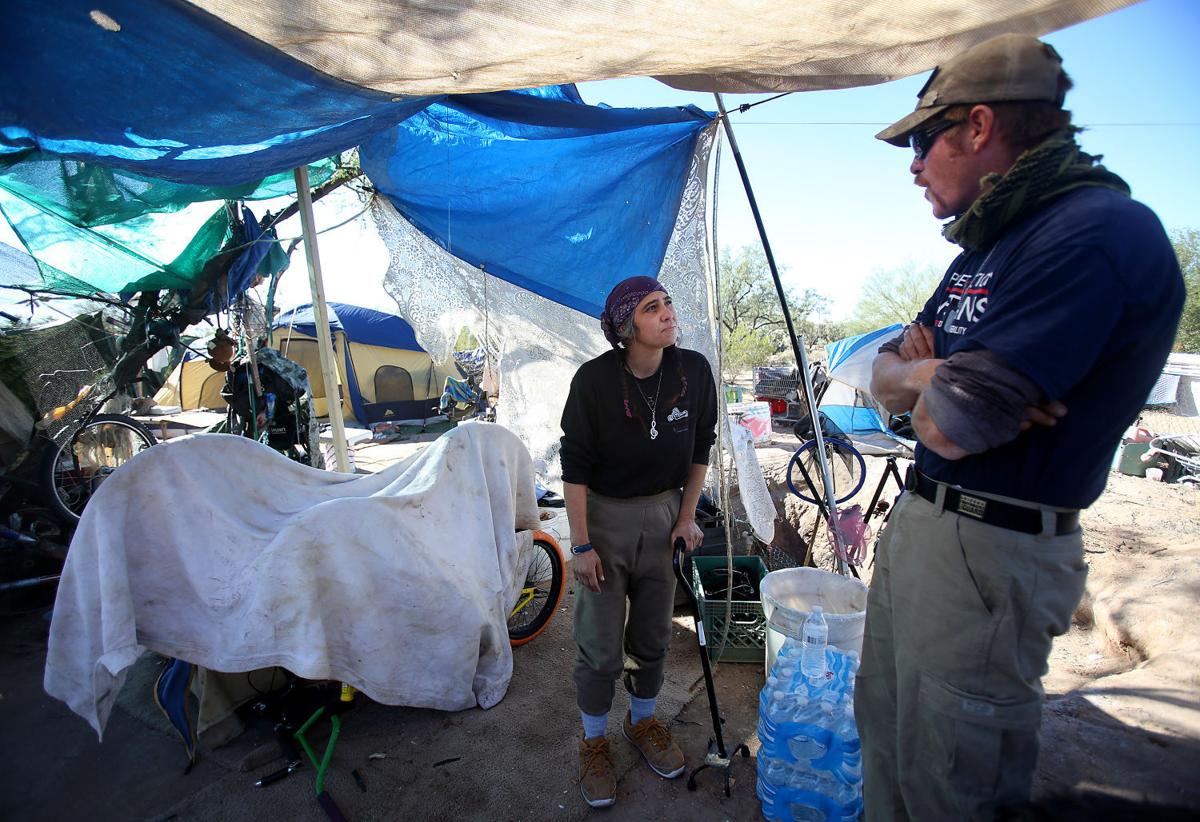 As part of his daily routine, Michael Lewis Arthur Meyer checks in with April Polansky to see if she needs anything for her camp near Davis-Monthan Air Force Base. The visit is part of VOP’s expanded efforts to help Tucson’s homeless.

Michael Lewis Arthur Meyer strode across Santa Rita Park carrying a U.S. flag, a signal to park-goers that he was part of the Veterans on Patrol group that recently set up camp across the street.

Moments later, Meyer balanced himself on a bathroom stall door as he searched for drugs stashed near a window, a favorite hiding spot for drug users.

Thursday morning’s search yielded little, but Veterans on Patrol members say they found 29 syringes in the park in the previous week, including two in the playground.

Those discoveries prompted the group to launch Operation Park Sweep on Nov. 3. Undercover members wear body cameras and post fliers announcing that drug dealing and violence will result in calls to the police.

“We’re not out here trying to arrest anybody. We don’t want anybody to go to jail,” Meyer said.

His purpose is to help people in need — but he wouldn’t hesitate to detain anyone who became violent in the park until police arrived, he said.

Detaining someone is “borderline vigilante,” he conceded, “but it never has to happen.”

Operation Park Sweep is just one of Veterans on Patrol’s efforts around the park on East 22nd Street and South Fourth Avenue.

Veterans and homeless women can sleep in the military-style tents at the camp just across East 20th Street from the park and enjoy free meals, a fire in the evening, and 24-hour security for as long as they like.

Non-veteran men can stay for three days, but then they have to cut wood, clean the camp, or help in some other way.

Meyer, who is known in the camp by his middle names Lewis Arthur, estimates the group has helped more than 300 homeless people since setting up camp about six weeks ago.

In the past month, seven veterans, nine women, and five non-veteran men have slept there, alongside the three-person staff. Another 70 people show up for a hot meal each time the camp hosts a get-together, camp staffer Brandon “Wolfgang” Mack said.

Rebecca DeLauer had no place else to go after she lost her job at a local restaurant and her ex-boyfriend harassed anyone who helped her.

“He can’t intimidate them,” DeLauer said of Veterans on Patrol members, several of whom openly wear guns on their hips. “I can go to sleep without worrying.”

Jeff Larson served in the Navy from 1986 to 1989 in San Diego and came to the camp earlier this week.

Although he had been without a house before, he could always sleep in his car. This time, he did not have a vehicle and was looking for a place to stay.

The high rate of suicide among veterans is an issue close to Meyer’s heart and the sign referencing it is posted prominently at the camp. Meyer is not a veteran, but he said he comes from a military family.

This summer, he held a protest atop a tower in Surprise to draw attention to the cause and went on a 22-day “walkabout.” Veterans on Patrol grew out of those efforts and a realization that people should “build each other up,” he said.

Veterans on Patrol set up its first camp, Camp Alpha, in Phoenix three months ago. Camp Charlie was established recently in Nogales.

No alcohol or drugs are allowed in Tucson’s Camp Bravo and staff discourage discussions of politics or race, Meyer said.

As was the case in Phoenix, Camp Bravo has had to move to stay in line with city zoning rules. Even now, organizers are trying to find a solution to a possible zoning code violation for the current location.

The property owner, HMS Fasteners, has given its blessing to the camp.

“If they get 10 people off the street, that’s 10 people that survived,” said Victor Lujan, sales manager at HMS Fasteners.

“I’ve been there,” said Lujan, a combat veteran of Operation Desert Storm.

He praised the group for cleaning up the lot and surrounding area, as well as taking care of homeless women.

A Tucson police officer meets weekly with Veterans on Patrol and the department has a “good working relationship” with the group, said Sgt. Pete Dugan.

“It really does appear they are out there helping the community and veterans,” Dugan said.

Danny Barry, a homeless man who has stayed at Santa Rita Park for the past four months, disagreed.

Veterans on Patrol members walk around the park with a flag, sometimes armed with guns, Barry said. They show up around dusk and threaten to call the police.

“It seemed like it only belonged to homeless people,” Walsh said. With Veterans on Patrol, “it belongs to the entire community,” including women who now take their children to play in the park.

For the most part, the group is quiet, said Ted Parks, who lives across the street from the camp. If Meyer starts a community garden, as he said he wants to do, Parks said he would help build it.

“They seem to be good neighbors,” he said.

For the time being, Veterans on Patrol is here to stay, Meyer said. Thursday morning started out with six tents, but several more popped up as the day unfolded.

The camp operates completely through donations, including 2,000 cords of firewood from a local resident, tents from active military personnel, a portable bathroom from Ace Portables, and a pickup truck from a member of Patriotic Warriors, an activist organization that describes itself as being dedicated to protecting the U.S. Constitution.

Security is provided by the 3% United Patriots, a militia group with 12,000 members across the country, said the head of camp security who would only identify himself as “Driver.”

Meyer teamed up with the militia group during his 22-day walk, Driver said. The group has 30 people watching the camp in Phoenix and another 10 doing the same in Tucson.

If extra protection is needed, Meyer said he has phone numbers for motorcycle groups America’s Overwatch and the Christian Motorcyclists Association on speed dial.

The efforts of Veterans on Patrol are expanding beyond the park, with Mercer and Mack regularly visiting homeless camps throughout the Tucson area.

Oro Valley police are looking for a man who stole 14 bottles of Tide detergent.

The annual count is used to win federal funds for services and to track progress.

Several Arizonans fought at a federal building in Oregon occupied by armed militia.

Dozens are courted by potential employers.

Veterans On Patrol have set up Camp Bravo near Santa Rita Park. Veterans and homeless women can sleep in the military-style tents at the camp.

He faces up to 20 years in prison.

Community Health Center marks final stages of its three-story building next to the Manning House.

A walk through #SafePark in Downtown Tucson

See the "dream pods" and tents at the protest sites along Broadway, Church Avenue and Congress Street

Hyun Joung, known as Pastor Amos, speaks to a group of homeless and needy people at Santa Rita Park on Sept. 25, 2015. He has been offering co…

In Arivaca, residents have made it clear new new armed border militia groups not welcome.

Fae Starling stokes a fire while living at Camp Bravo. Homeless women and veterans at the camp have regular access to free meals, tents and 24-hour security.

As part of his daily routine, Michael Lewis Arthur Meyer checks in with April Polansky to see if she needs anything for her camp near Davis-Monthan Air Force Base. The visit is part of VOP’s expanded efforts to help Tucson’s homeless.