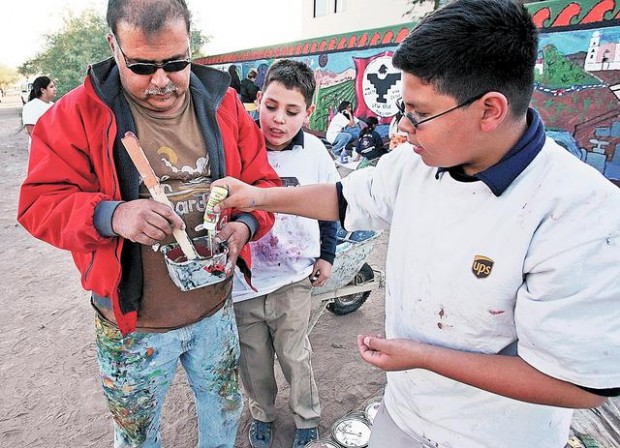 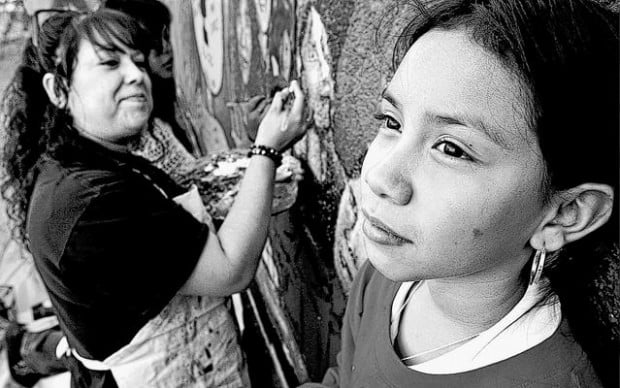 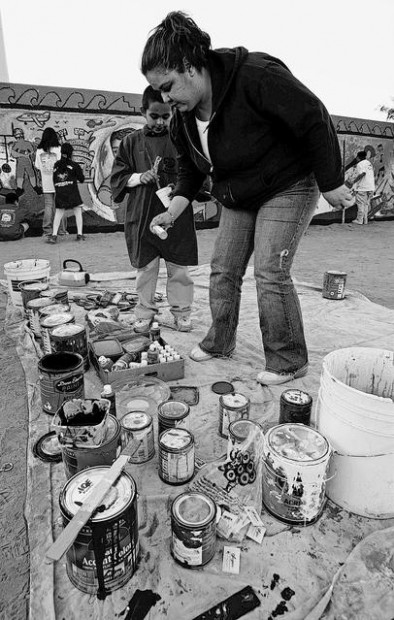 Nearly two years after he lost most of his central vision, his optic nerve still relays peripheral images of light and shadow, color and tone. His brain melds those with memory, and his hand brushes them onto canvases in the small studio behind the house he shares with his mother in Menlo Park, west of Downtown.

Memory is the important component of Tineo's work. He has always painted his life.

The mural he recently supervised for the Linda Avenue Project of the Menlo Park Neighborhood Association contains many familiar scenes, including one of three generations of Mexican women making tamales around the kitchen table.

It could be his own home in Barrio Anita, north of Downtown Tucson, where his grandmother, mother and sister shared one bedroom, and the six Tineo boys in three sets of bunkbeds shared the other.

Tamales, in addition to being a holiday tradition for the family, were also a way for his mom, Ernestina, to make some extra money. She sold tamales, cleaned homes and took in ironing to raise her seven children on her own after their father left.

"We didn't know we were poor."

Big brother Tony Tineo's Christmas memories begin in church where he and his younger brothers and sister would sing songs and perform skits before a backdrop painted by little brother David, who did his first set-designing at age 6. Iglesia Metodista Libre was run by a German pastor, and the kids sang in German, as well as in Spanish and English.

The Christmas highlight, Tony remembers, was a visit to the clothing bank, organized by local charities.

There were no shiny, new bikes under the tree. No tree, many years.

"We were no different from the other families in the neighborhood," said David.

Tony, in addition to becoming the man of the house at age 12, was also the family inventor. "If we wanted any toys, I would make them," he said.

Inspired by Lloyd Bridges' "Sea Hunt" TV show, he made wooden submarines that would float until the rubber hoses he attached to the sides filled with water and dragged the submarine into a smooth dive. He made clothes-pin guns that would light and fire wooden matches. They worked so well, he nearly set his neighbor's yard on fire.

One of the neighbor kids, wealthy enough to afford store-bought presents, coveted the Tineo toys. He once traded a BB gun for one, Tony said.

"La lucha es permitida." (It is permissible to struggle)

The Tineo household spoke Spanish, and the children entered school in English-immersion programs.

Tony remembers his knuckles being rapped for speaking Spanish.

His grandmother, with no formal education, and his mother, who completed six grades of schooling in Mexico, pushed hard for the next generation to get as much education as possible. The outcome didn't matter, their grandmother would tell them; the struggle itself would pay off.

Their mother simply expected them to do well, said David, "and we saw how hard things were for her."

The family succeeded. Tony, who designs water systems for Tucson Water, and brother Steve are civil engineers. David has his bachelor's of fine arts from the University of Arizona. Three of the others have junior college degrees.

Tony, who led the way, was near the top of his class at Tucson High, where he also starred in track.

He spent a summer in Washington, D.C., in a program sponsored by the League of United Latin American Citizens. He dined with Rep. Mo Udall, D-Ariz., and his family.

He considered MIT and Stanford, was assured a commission to West Point by the congressman, but accepted a scholarship to the UA. "I felt obligated to stay and be kind of a father figure to the family."

His wife says it still shows, Tony said. "I'm a little too serious."

"The younger brothers had more opportunities," said David Tineo. "It was harder on Tony."

Tony, three years older, didn't have to be David's physical protector. He remembers when one neighborhood kid, older and bigger than David, picked a fight with him. Next thing he knew, David was atop the kid in the middle of the street, wailing away.

David would charge into anything, Tony said. "He's always been the action guy."

He continues to charge into painting and paints as quickly as he ever did, though he takes more time to stretch a canvas or select a color, holding the tubes of paint off to the side to determine color.

One year after declaring that he could no longer paint the large murals that made him, arguably, the most recognized artist in Tucson, he has completed one of his largest — the first Tineo mural in the neighborhood where he lives.

He did not select the images on the block wall behind the Menlo Park Neighborhood's Linda Avenue Project, but he guided the process in which neighborhood boys and girls chose what they wanted to paint, then spent weeks transferring those choices to the wall in an after-school program run by Chicanos por la Causa.

Tineo suggested themes and provided the broad outline of the 200-foot-long mural. He persuaded other local artists to contribute some intricate portions. The kids and neighborhood volunteers did the rest.

It would have been an easier task if the mural had stayed within the confines of the original design, "but we just had a lot of people who wanted to contribute. It just went on and on," Tineo said. "It's really tested my eyesight."

The mural wall sits behind a 1930s bungalow on Linda Avenue that Pima County is restoring and donating to the neighborhood as a community center. It is just north of the area where the city of Tucson will build the heritage park of its Rio Nuevo Origins project — a complex of re-created buildings and gardens that will celebrate the area's original settlers.

You might call "Nuestro Pueblo — Tucson" the first completed Rio Nuevo project. It, too, is populated with the images that built the city.

On the wall, the Santa Cruz River flows from a decorated pot, beneath the Tucson Mountains, alongside farm fields like those that once lined the river. It ends in a series of pipes and valves that represent our modern solution to the desert's water scarcities.

The mural is flanked by sections of professional artistry. At the south end, Fernando Gonzalez depicts a padded Mayan ballcourt player, a fantastical eagle, ancient observatory and constellations.

On the north, an Aztec calendar outlined by Tineo has been filled with color by artist Ruben Moreno.

In between, the mural depicts a Yaqui deer dance, a Tohono O'odham maze, children playing, reading, going to the University of Arizona. Artist Tanya Alvarez filled a center panel with recognizable images of neighborhood icons, including her friend and mentor, David Tineo.

Tineo said he had to put his foot down, the day before the mural's dedication, when his artist friends tried to perfect it. "I said 'This is a children's mural, not an adult mural, not a fine-line, everything-has-to-be-perfect mural.' "

"This is the end of my chapter, as far as public art work in Tucson."

He says this is his last mural.

During the project, he found himself talking to the wall and to one of the mesquite trees nearby. He thought someone was there. He tripped a couple of times.

His eyesight over the past year hasn't gotten any better. It's not expected to. The eye doctors say the damage is irreversible.

He doesn't think it's gotten worse. "Or maybe I'm just getting used to it."

He has stopped going to the eye doctor and has tried and abandoned the many herbal and natural cures offered him. He declined an offer from the VA to attend classes that would help him adapt to his disability. He sees enough to walk around, jokes that he likes being chauffeured by friends and family.

And he can still paint. He is, in fact, trying new techniques, using caulk on his canvases to add texture. "What I like about what I'm doing now is that I'm building up a tactile surface. If I'm having a bad eyesight day, I can touch and feel. You adapt and if you love to do something, you find a way to do it."

Professionally, it's been a good year. In April, he won the governor's arts award. In October, he was given a lifetime achievement award by the League of United Latin American Citizens. The one thing it didn't bring is riches. "I'm broke at Christmas. What's new?"

He is preparing for a one-man show at Galeria Mistica in South Tucson early next year. Gallery owner and curator Gene Edwards said David's art easily fit his gallery's dual mission of providing a space for art exhibitions that tell a story and a forum for discussion of spiritual topics.

"I met David. I looked at his work. It has a spiritual quality."

Read the rest of the series about the artist and view a slide show at go.azstarnet.com/tineo

Arizona Gov. Doug Ducey pointed out the new law won't take away anyone's right to vote. GOP lawmakers said it will prevent voter fraud; some Democrats accused them of not wanting people of color to vote.

A plan by California's grid operator to limit power exports to other states could jeopardize Arizona's ability to get emergency power.