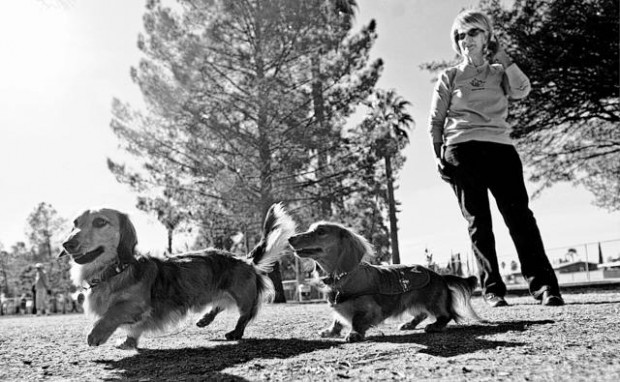 By Matt Lewis for the Arizona Daily Star

The smart money for the winner of the upcoming Wienerschnitzel Wiener Nationals this year is on a feisty little Tucson dachshund named Poppy.

Poppy, who is 13 inches long, 6 inches tall and weighs in at 9 pounds, is owned by Nancy LaVigne. The diminutive dog is an English cream, red long-haired dachshund and despite genetic setbacks, she has already proved she can win.

On a 50-foot track, Poppy was the big winner of the Tucson wiener dog race. She beat more than 48 other competitors in the regional Oct. 11 race to advance to the nationals in San Diego.

"I couldn't believe it, I was shocked," LaVigne said about Poppy's victory and the all-expenses-paid trip to the national race. But the dog enjoys the exercise. "Since she was a puppy, she's loved running," LaVigne said.

Poppy is headed to the Golden State on Dec. 29. She will compete against eight other dachshunds before a crowd of nearly 500 people prior to the Holiday Bowl Parade.

If Poppy wins, she'll get to be front and center on the Wienerschnitzel float. But even if she's not crowned champion, she and the other dogs will get to be a part of the float.

The winner will receive $1,000 and will be featured during a timeout of the Holiday Bowl the next day. LaVigne plans on giving a percentage of the proceeds to the Sahuaro Dachshund Rescue and World Vision (an anti-poverty organization), should Poppy be victorious.

The winner's name will also be imprinted on a cup similar to the Stanley Cup, according to Justin Tetley, a promotions manager for Adville/USA, an advertising agency in Pasadena, Calif., that sponsors the Wienerschnitzel Wiener Nationals.

Poppy can do it all, and she doesn't even need to train. LaVigne says Poppy plays instead of trains. "Even though they were not really bred for racing, I just call her name and she runs," LaVigne said.

When you're as big as Poppy, you have a personal photographer, and in the dog's case, that person is Lou Liebau. Liebau works for Focus On Events, a Tucson photography studio. She also does freelance photography.

"Nancy deserves to go. Nancy and I organized the wiener dog race here," Liebau said, "Poppy definitely loves Nancy, and that's what it takes — the dog has to love the owner."

Poppy will shine on and off the racetrack in her University of Arizona outfit made by a friend of LaVigne's, Cindi Cooper. Cooper does work for Sahuaro Dachshund Rescue, which is how she met LaVigne.

LaVigne also told a Home Depot carpenter, James Willhite, about Poppy and asked what he could do. He offered to build a training apparatus for free. The device is designed to be like the starting box at the nationals.

Poppy also engages in philanthropic work when she's not racing. She goes to Devon Gables, an assisted-living retirement home, on Fridays to cheer residents up.

"The elderly thoroughly enjoy both her and her brother Murphy," LaVigne said.

Dachshunds "are very comical, like clowns. They get into everything," she said.

● Matt Lewis is a University of Arizona journalism student and an apprentice at the Star.

For Star subscribers: To critics, Glen Canyon Dam was one of the U.S.'s biggest environmental mistakes. But it generates electricity for about 5 million people in seven states.

Jim Kolbe, who represented Southern Arizona in Congress for 22 years, died Saturday, Dec. 3, of a stroke at the age of 80.

For Star subscribers: Reclamation is for the first time legally signaling its intent to make major cutbacks in water deliveries to the Lower River Basin state, including Arizona.

For Star subscribers: Maricopa County wants a judge to toss out Republican Kari Lake's bid to immediately be given election records so she can challenge her loss in the governor's race.

For Star subscribers: The midtown Tucson building was bought by an affiliate of Summit Hut. No changes have been announced.

One of the men who showed up with zip-ties to confront the principal of a Vail Elementary School over COVID-19 protocols was sentenced to serve 30 days in jail on Wednesday.

For Star subscribers: Tucson Unified School District wants to add sixth grade to six elementary schools for the 2023-2024 school year. Other schools might follow if the plan succeeds.

For Star subscribers: She outlines for prosecutors the laws she thinks two GOP Cochise County supervisors broke by refusing to certify election results by the legally required deadline.