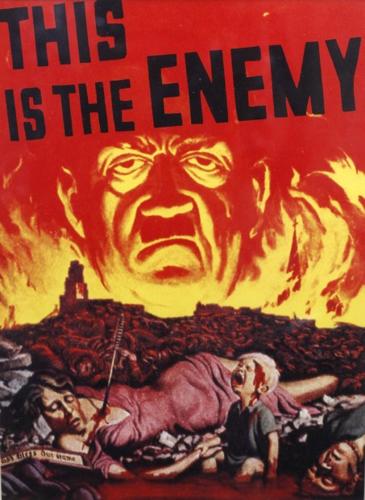 Bryers took the top prize in the 1942 National War Poster Competition at the New York Museum of Modern Art. This image is a copy of an enlarged reproduction from an article in Life magazine. 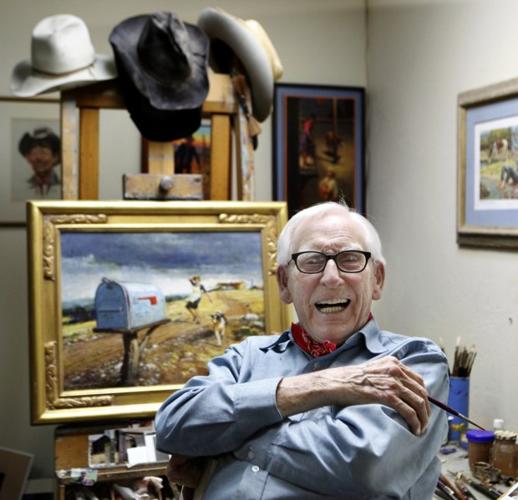 "I've had an absolutely fascinating life," Duane Bryers once told the Star. That life was as varied as it was compelling: He was a farm boy, sawmill worker, ditch digger and ice sculptor, among other occupations.

Duane Bryers was not a man easily labeled.

A Minnesota farm boy, who at times worked in a sawmill and dug ditches, swung from a trapeze in the circus, painted murals, drew comic strips and sculpted historical figures in ice, found success as a commercial artist and well-known painter of Americana.

The prolific artist - Dick to his friends - died at his Tucson home Wednesday just a month shy of his 101st birthday. No plans for a memorial have been announced.

"He was a terrific artist. He had varied interests in art from the very modern to the Masters. He was very knowledgeable in all facets of art," said Tucsonan Stuart Johnson, owner of Settlers West Galleries. He began showing Bryers' work in 1977.

"Most of the paintings had a tinge of humor with them. They always kind of made you smile when you looked at the painting," Johnson said.

That quality was most evident with the artist's happy-go-lucky calendar girls. Bryers was the Norman Rockwell of pinup art, with his zaftig beauty, the oft-bikini-clad "Hilda," taking center canvas. He began producing his Hilda collection in the mid-1950s.

"I got the idea for a plumpy gal pinup and thought I'd like to make it into a calendar series," Bryers said. "But how was I going to sell a plump girl?"

He took his series to Brown & Bigelow, then the country's top calendar maker, and "they reluctantly put it in the line and figured it would last a short time," he said. "It went on for 36 years."

After moving to Tucson in 1959, Bryers began painting scenes from what he considered Americana - "I started doing Western paintings just for my own amusement," he said - but the self-educated artist's innate abilities emerged decades earlier in an eclectic series of projects.

In 1936, he carved three large ice sculptures of American historical figures. He followed that feat with a second-place finish in Procter & Gamble's National Soap Sculpture competition. He was awarded $150 for his carving of "Scrubwoman," made from a single cake of Ivory soap. A year later he was commissioned by his local school board to paint a mural depicting the iron-mining industry of northern Minnesota. The $3,000 he made on that job financed his move to New York City, where he intended to "astound the art world."

"I spent hundreds of hours in those galleries and got my intellectual art education there," Bryers said.

When he was inducted into the Army Air Forces and sent to aviation mechanics school in Texas, Bryers made a few extra bucks on the side by painting girlie art on the fuselages of aircraft for the flight crews. His artistic abilities led him to be reclassified and allowed to do poster art and a comic strip for the base newspaper.

By the time Bryers left the military and took a job as a commercial artist in Chicago, he was a married father of three. Eventually he ended up in New York City working for top ad agencies. It was in the Big Apple that Hilda was born.

A few years later the family moved to Tucson. While the marriage didn't stick, the move did. Bryers, who remarried, spent most of the rest of his years living in Southern Arizona.

It was in the Old Pueblo that Bryers cultivated a unique group of artist friends which he dubbed the "Tucson Seven." In 2005, the Tucson Museum of Art staged a show and called the group of friends "some of the biggest names in Western art."

Harley Brown, a member of the Tucson Seven, met Bryers in the 1970s and was as impressed with his artistic abilities as he was with his attitude.

"There was nothing he couldn't paint. He was supremely gifted. A lot of what he learned, he learned on his own. He picked it up so brilliantly. Some people just get it, and he got it early in his career," said Brown, who saw Bryers a month before his death.

"He was like a bottle of champagne. You open it and it's bubbly. I'd never seen him down.

"We were those lucky people who made art our lives," Brown said. "There's a little less of me now that he's gone."

To suggest someone for Life Stories, contact reporter Kimberly Matas at kmatas@azstarnet.com or at 573-4191.

Duane Bryers — Dick to his friends — was not a man easily labeled. A Minnesota farm boy, who at times worked in a saw mill and dug ditches, s…

Bryers took the top prize in the 1942 National War Poster Competition at the New York Museum of Modern Art. This image is a copy of an enlarged reproduction from an article in Life magazine.

"I've had an absolutely fascinating life," Duane Bryers once told the Star. That life was as varied as it was compelling: He was a farm boy, sawmill worker, ditch digger and ice sculptor, among other occupations.