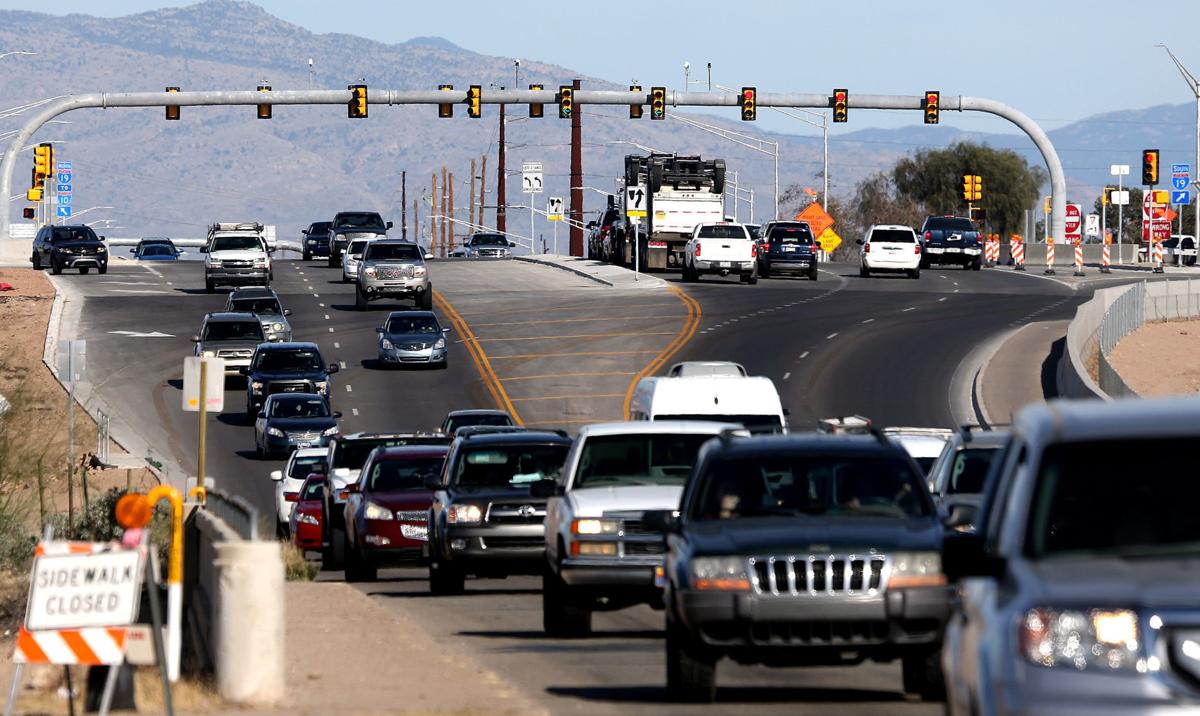 A view looking east along West Ajo Way at the new intersection with Interstate 19 as first phase construction nears completion at the intersection on March, 23, 2018, in Tucson, Ariz.

A view from Interstate 19 in 1964 shows the Ajo Way intersection. The current work on the intersection will include new traffic signals and access roads for the new bridge

The Arizona Department of Transportation is putting the finishing touches on the new Ajo Way-Interstate 19 interchange this month, putting an end to the two-year, $40 million first phase.

Among other features, the new interchange includes a single-point urban interchange (SPUI), which the Road Runner drove Friday morning. It sounds confusing, but it was actually pretty straightforward (if you have a different experience, please reach out).

Unlike some other interchange designs, SPUIs sport a single controlled intersection, as opposed to the two that were there previously. For reference, there are two others in the Tucson area: one at Valencia Road and I-19 and another at South Kino Parkway and East Aviation Parkway.

The other features of the first phase include a widened Ajo Way east of I-19, noise walls on both sides of the interstate from Ajo south to Michigan Avenue and a wider southbound off-ramp at Irvington.

The first phase also came with regular delays and lane and ramp closures. Nearby residents are no doubt looking forward to respite after the lengthy project, as well as the improved traffic flow the new interchange promises, but the second phase of the project is likely only several months off.

The Road Runner checked in with ADOT spokesman Tom Herrmann to get a sense of what remains with the first phase and what to expect for the second.

Nearly $36 million has been budgeted for phase 2, according to ADOT’s advertisement for bids. The bid opens on April 27 and, whoever the winning contractor is will have 560 days to complete it, according to the same document. Herrmann said current estimates are around $29 million. Work is expected to start in late summer.

Among the major elements will be a so-called “braided” ramp alignment with the southbound Ajo on-ramp and southbound Irvington Road off-ramp. That means the Ajo ramp will go over the Irvington ramp, thus reducing conflict between entering and exiting vehicles, according to Herrmann.

A new Ajo bridge over the Santa Cruz River will also be built, as will an auxiliary lane on northbound I-19 between Irvington and Ajo. The Michigan Avenue pedestrian bridge will also be replaced.

But what will all this mean for motorists during the construction period?

While conceding that there will be periodic delays and closures for the new bridge, braided ramps and other pieces, Herrmann said their impact will be less dramatic than that of the first phase.

“The hardest part is done,” he said.

More information on the project can be found at tucne.ws/ajointerchange

There will be county fog-seal work this week at three locations. Here are the details:

Lane restrictions and reduced speeds will be in effect during the work. Sheriff’s deputies and flaggers will be on hand.

The northbound Interstate 19 off-ramp at Pima Mine Road will be closed overnight from 10 p.m. Tuesday through 5 a.m. the following morning. The southbound ramp will not be affected. Nogales Highway can be used as an alternate route.

Tucson Citizen photographer Preston Yeager took a drive to Nogales, Sonora, in July, 1956 on Old Nogales Highway, U.S. 89. Why did he make the…

A company spokesperson said he has likely driven over 1 million miles in his career.

The owner is "exploring alternatives" for the site, and city officials hope it doesn't remain a vacant lot.

A bypass over the city will eliminate commercial trucks on surface roads.

A view looking east along West Ajo Way at the new intersection with Interstate 19 as first phase construction nears completion at the intersection on March, 23, 2018, in Tucson, Ariz.

A view from Interstate 19 in 1964 shows the Ajo Way intersection. The current work on the intersection will include new traffic signals and access roads for the new bridge