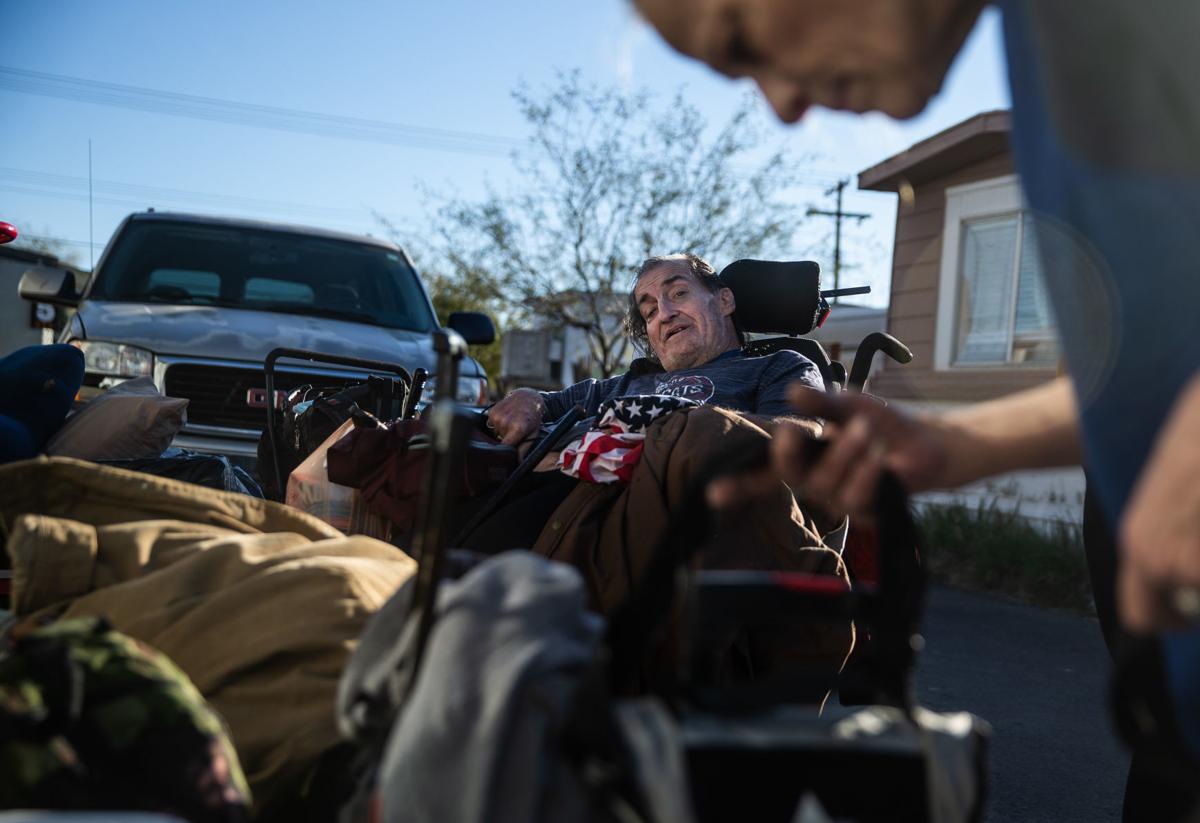 Tucson resident Chuck Laya, 56, lost the use of his legs and arms 15 years ago after being assaulted at the Pima County jail, where he was being held for a driving offense. 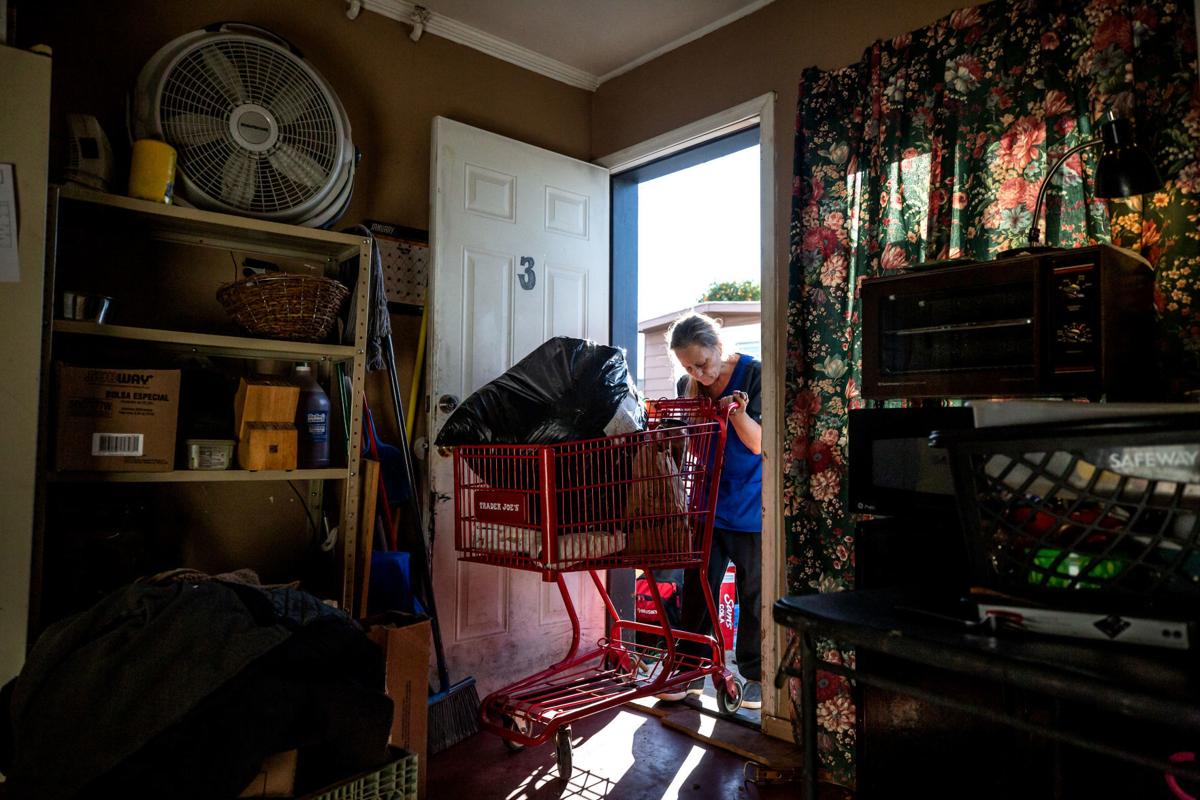 Laya’s friend Darlene Stevens packs up belongings from his apartment after he was evicted. Laya had paid only $200 in January, but for a year he had paid in full and on time. 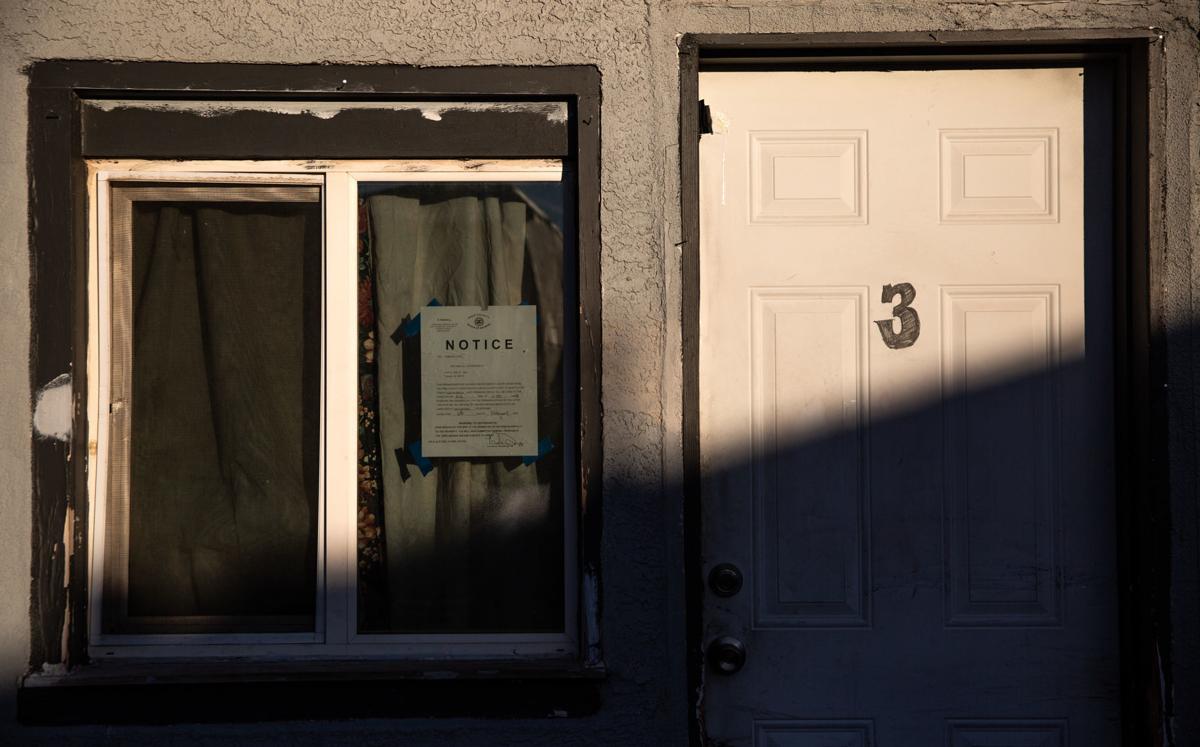 An eviction notice hangs from the window outside Chuck Laya’s former apartment, on Feb. 6, 2020. 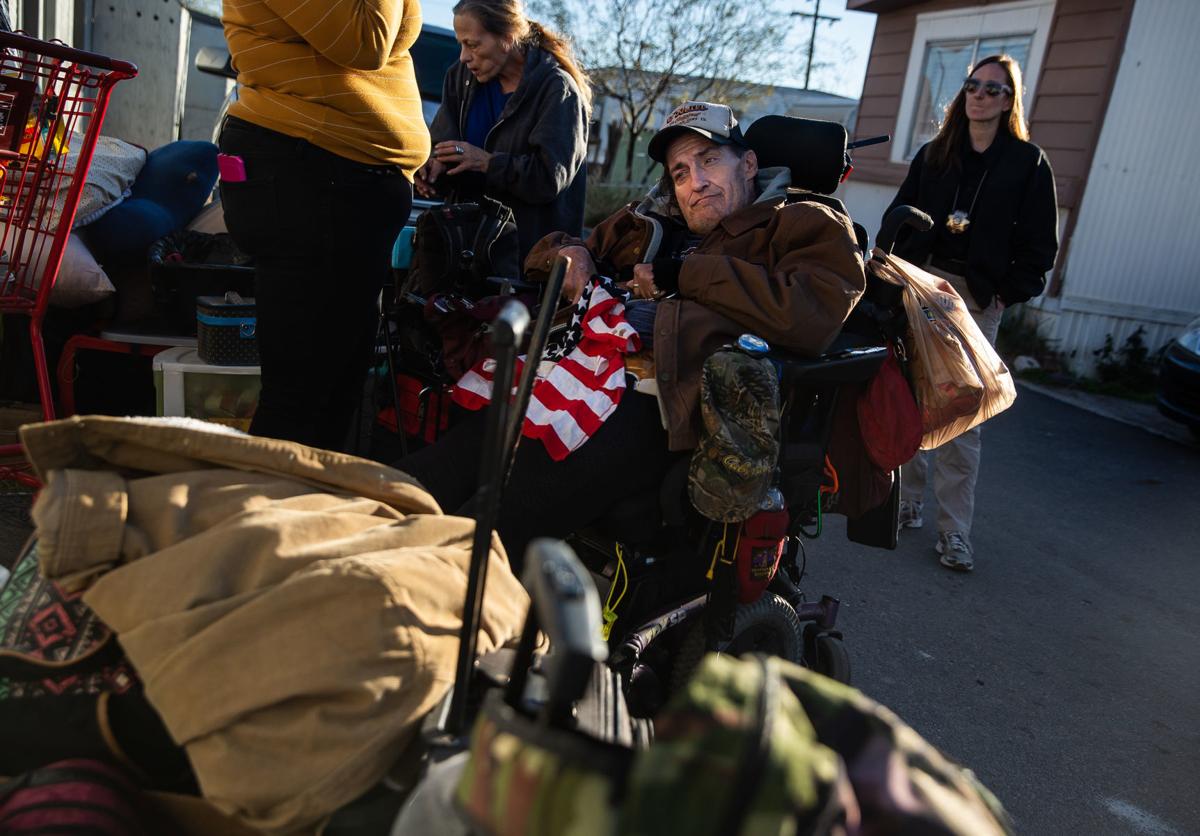 Chuck Laya sits among his belongings outside his former apartment as he is evicted, on Feb. 6, 2020.

Tucson has over 700 unused Section 8 housing vouchers and a waiting list of 8,543 applicants, as rents here continue to climb and an increasing number of people struggle to afford places to live. No one new has been added to the waiting list since 2016, when the city last stopped taking names for the federal assistance. At the same time, vouchers that became available because people here left the program were not being quickly reassigned.

This is what led to the hundreds of unused vouchers.

The city is working as quickly as possible to address the problem, says Liz Morales, the city’s housing director.

Her department has pulled 600 names from the old waiting list since Morales became director in October. If they can find the person with the old contact information, and the person is eligible, it takes 60 to 90 days to have the voucher issued.

“We’re doing everything we can to get those vouchers into the hands of people who need them,” she said. “I think during the next year, we will be able to demonstrate a lot of progress.”

The U.S. Department of Housing and Urban Development, or HUD, wants to see cities and municipalities use all of the federal housing vouchers that are made available.

There are currently 5,534 vouchers allocated from HUD for the city of Tucson. Of those, 4,759 are being used, which is about 86% capacity.

Compounding Tucson’s housing problem: over the last year, the cost for a rental unit in Tucson increased an average of $53 per month, with some rent increases in the hundreds. Some property owners who were taking Section 8 have stopped doing so.

Prices have been going up for a while. In 2014, for example, the average monthly rent in Tucson was just under $640. By the first quarter of 2019, it had jumped to just below $800. By the third quarter of last year, according to Picor Commercial Real Estate Services’ data, it was up to $820.

Nationwide, about 1 in 3 people who use a Section 8 voucher are challenged by a disability. That often compounds the difficulty in finding a place to live.

Tucson resident Chuck Laya hasn’t used the federal assistance before, but that could change in upcoming weeks.

Laya, 56, is determined to remain independent, even in the face of homelessness on what were some of Tucson’s coldest nights this year.

Laya lost the use of his legs and arms 15 years ago after being assaulted at the Pima County jail, where he was being held for a driving offense. He sued, and lost, and has since scrambled to get by on less than $1,000 per month.

When he was facing eviction during a cold spell last week, Laya had nowhere to move to and no one offering temporary respite. Tucson’s Operation Deep Freeze — a network of local organizations that house homeless people overnight when temperatures drop — could not accommodate his disability.

Because of the weather, Pima County Constable Kristen Randall refused to evict Laya and so he remained in his apartment within a midtown trailer park. During that time, Randall found him a placement in an assisted-living facility but Laya, afraid he’d never live independently again, refused to go.

By Friday, when his eviction could no longer be stalled and he was facing time on the streets, his luck changed.

Laya and friend Darlene Stevens, who has been living with him and helping him, were temporarily welcomed into the home of a stranger found by his home-health caseworker, Natalie Hammond.

This break was coupled with Laya receiving expedited services from the city.

If there’s no housing spots available that will work, Morales said, he might be eligible for a Section 8 voucher, which would offset his housing costs.

Hammond, Laya’s caseworker, said it’s a tremendous relief to have help, especially since she’s been trying for weeks to find him a place to live. Laya gets by on $800 per month in disability income but little else.

“It’s been so frustrating,” said Hammond.

“I have never seen, until I worked in this field, how people with disabilities struggle to find housing.”

“Hard to get back out”

If Laya had agreed to go into assisted living, all of his disability income from Social Security would go to the facility, and he’d get $30 per month in spending money.

This would not enable him to save for a new place to live, he said, and that was too much to bear.

Robert Peschke owns the midtown trailer park where Laya had been living. He said he gave Laya notice in early November that his lease was going to end at the end of January.

The reason, Peschke said, was that Laya had people coming by at all hours and it disturbed the other tenants. Laya says those visitors were mostly home-health workers as well as friends.

Laya, who was struggling to figure out where to go, paid only $200 in January but for a year had paid in full and on time.

When he was still there in early February, Peschke sought an eviction.

“I tried to give him time,” he said. “We don’t make these decisions lightly.”

What did shock her was how quickly he was able to get some help.

Hansen, the executive director with Southern Arizona Adaptive Sports, has been voluntarily helping people with disabilities find housing for more than seven years. She also offers them assistance, when needed, with learning the life skills that can help them navigate complicated systems. Some of the people she’s assisted are refugees with physical disabilities.

During fiscal year 2019, the Arizona Center for Disability Law received 120 requests for housing assistance from people living with disabilities statewide.

That’s more than 8% of the organization’s total requests for help that year.

Hansen became an advocate for people with disabilities after her brother lost his mobility 42 years ago in a diving accident.

She said it can be “incredibly difficult” for people to get help.

She watches for affordable, wheelchair-accessible apartments but says many of the places she’s come across are “no place for any human being, much less a person with a disability.”

“I knew this was coming”

Hammond said she wishes she could do more to help Laya as well as other clients she has whose needs are great and resources lacking.

“I knew this was coming and I was trying to help him,” she said of Laya’s eviction. “He’s on such a fixed income.”

At one point in January, they thought they had found him a place to live, but Laya did not have enough money.

Hammond said she marveled at Laya’s ability to problem-solve. She said he rigged his apartment to have a pulley so he could move himself around in some rooms without assistance.

“He may not have his mobility, but he certainly has his mind,” she said.

For now, she’s trying to help another one of her clients, a woman who had two legs amputated and who is now being priced out of her apartment.

Randall, like Hammond, hears the stories and wishes they could help more people more quickly.

“We pulled together for this man and that’s amazing,” she said, “but what about all the others?”

The ticket was sold at a Fast Lane Shell store.

Picture Rocks woman is charged with felony in trapping, killing of neighbors' dog

Records show Marilyn Hendrickson called Pima Animal Care Center at least five times after more than a dozen of her chickens were killed and her goats were attacked, which she blamed on neighbor's dogs.

Tucson resident Chuck Laya, 56, lost the use of his legs and arms 15 years ago after being assaulted at the Pima County jail, where he was being held for a driving offense.

Laya’s friend Darlene Stevens packs up belongings from his apartment after he was evicted. Laya had paid only $200 in January, but for a year he had paid in full and on time.

An eviction notice hangs from the window outside Chuck Laya’s former apartment, on Feb. 6, 2020.

Chuck Laya sits among his belongings outside his former apartment as he is evicted, on Feb. 6, 2020.