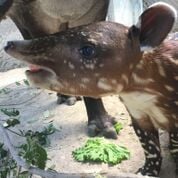 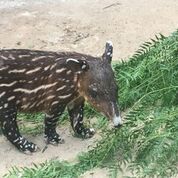 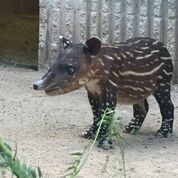 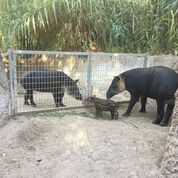 "Contessa has previously been an attentive mother and we expect she will be the same with her new calf," said Sue Tygielski, a zoo curator.

"It is great to see how responsive Contessa is to the whistling and squeaking noises of her calf as he explores his surroundings," Tygielski said.

Contessa, 15, and Tupi, 11, are breeding as part of a species survival plan. The zoo works in partnership with other facilities accredited by the Association of Zoos and Aquariums to cooperatively manage threatened and endangered species, officials said.

The baby calf does not have a name, but the Tucson community will be able to vote on this little one's name in the coming weeks.

Zoo visitors also may get a peek at the calf while he explores his habitat. When not on exhibit, Contessa and her calf will remain behind-the-scenes to ensure an environment with minimal stress as the calf continues gaining strength, said zoo officials.

Prior to this calf, Contessa and Tupi had Toliver who was born two years ago. Toliver was transferred to the Africam Safari in Puebla, Mexico as a breeding recommendation from the Association of Zoos and Aquariums.

Baird's tapir, also known as the Central American tapir, is native to Mexico, Central America and northwestern South America. It is classified as endangered by the International Union for Conservation of Nature.

A year with Nandi.

From baths to balls, Tucson's baby elephant learns about life.

A polar bear that received media attention after she and her brother were abandoned by their mother is now living at the Reid Park Zoo.

Tamanduas at the Reid Park Zoo, also known as lesser anteaters because of their size, have lived for years in the shadow of the zoo's three giant anteaters. Now, with the birth of one of the unusual creatures, the tamanduas are getting recognition.

Watch: Everything you need to know for Saturday's El Tour de Tucson

CSU Bakersfield (1-1) comes to McKale Center to take on the No. 3 Arizona Wildcats (2-0) on Thursday night. The Wildcats beat the Roadrunners …

He faces up to more than eight years in prison, or probation possibly for life.

Detectives are asking the public for help in identifying the assailant.