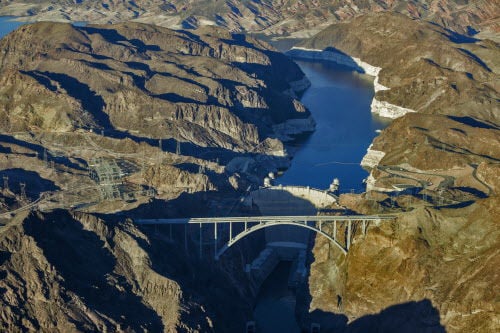 The water level behind Hoover Dam was low in 2015, with a “bathtub ring” showing previous water levels clearly visible. Runoff from heavy snows is expected to refill the reservoir. 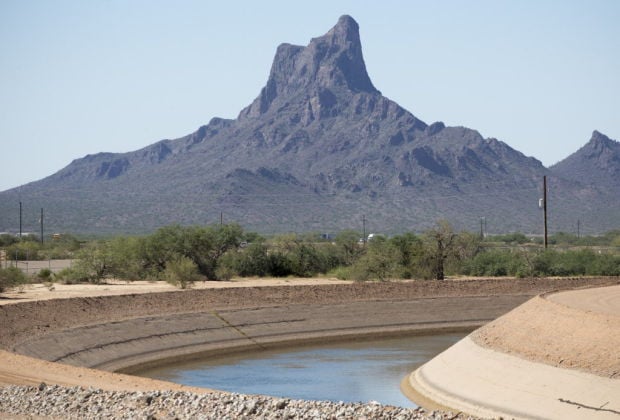 An unusually snowy winter in the northern Rockies has for now helped put the kibosh on a statewide plan to conserve Colorado River water to stop Lake Mead from falling too low. Future conservation efforts are highly uncertain.

For many months, water agencies including Tucson Water have discussed a plan to save 1.2 million acre-feet of river water over three years to delay the threat of shortages to the Central Arizona Project, which brings drinking water to Tucson and Phoenix and irrigation water to Central Arizona farmers.

But the snowy winter appears to mean that the river and lake will be flush enough this year to significantly reduce the odds of short-term water cuts even without a conservation plan. The abrupt weather shift has intensified an already major split among water officials about what to do next.

CAP officials say the earlier proposal is “no longer viable” and that it’s time for a new approach.

“The improved hydrology has changed the landscape and given us a reprieve,” said Suzanne Ticknor, CAP’s water-policy director. “We have the opportunity to get it right, to sit back and find out what we want to do to find consensus in the state. We don’t need to do huge volumes of conservation right now.”

Other water users disagree with this position, including the Arizona Department of Water Resources (DWR), the Tucson and Phoenix water utilities and the Gila River Indian Community, which controls the largest share of CAP water.

“I do not believe one year of good hydrology is enough to stop us from seeking to conserve water in the lake,” Arizona DWR Director Tom Buschatzke said, referring to Lake Mead, a reservoir of Colorado River water.

He and other officials said recent weather doesn’t substitute for a long-term policy during a 17-year drought, the longest in the historical record dating to 1906.

At stake is an Arizona version of the Drought Contingency Plan, an effort by this state, California and Nevada to negotiate a long-term, water-use reduction agreement. The goal is to reduce the risks of Lake Mead dropping below 1,025 feet, compared to the 1,070s to 1,080s it has been at recently.

At the lower lake level, water deliveries to Tucson and Phoenix would be jeopardized and Hoover Dam’s power output would be dramatically curtailed. The risk is due to what authorities say is a structural deficit, in which people in the Lower Colorado River Basin use more water each year than the over-allocated river provides, even when it’s not in a drought.

The Arizona plan, called DCP Plus, seeks to delay for three years or longer the first CAP shortage, which would happen if the lake drops below 1,075 feet at year’s end. Last December, the U.S. Bureau of Reclamation predicted that the chance of a shortage for 2018 through 2020 was around 50 percent and warned the river was “on the brink”.

But at a March 2 CAP board meeting, project officials were rejoicing over the heavy snowfalls that had fallen in the river’s Upper Basin, which supplies crucial spring runoff to Lake Powell, another Colorado River reservoir.

“The Green River has a tremendous snowpack situation. Flooding will occur in that watershed this spring. Not that we’re wishing it on our Wyoming friends, but quite frankly I’m for it,” said CAP Colorado River program manager Chuck Cullom.

There’s so much snow that a major Wyoming cloud-seeding program has been suspended to reduce the risk of flood damage, Cullom added.

As of March 1, Upper Basin snowpack was 154 percent of normal. Annual spring runoff into Powell was predicted to be 10.4 million acre-feet, or 145 percent of average, said Brenda Alcorn, a federal Colorado Basin River Forecast Center hydrologist.

The reclamation agency now sees a greater chance of above-average water releases from Powell to Mead for three years than it does of shortages.

So instead of a fixed, three-year conservation plan, CAP official Ticknor said that while the agency remains committed to reducing the river’s structural deficit over the long term, the best solution now is to plan annually.

“It has to be more of an adaptive approach and look at things in real time and understand the hydrology, what the inflow to Powell is and what Mead’s elevation is each year,” she said.

That’s possible due to the complex, seven-state guidelines covering management of Lake Mead at the Arizona-Nevada border and Lake Powell at the Arizona-Utah border, she said. Worrying about “overconserving” is a shift in emphasis among CAP officials, who have a “Protect Lake Mead” message on their home page and produced videos and other material saying the same.

While remaining concerned about Mead’s long-term risks, CAP officials say that under certain circumstances, the guidelines mean that too much conservation can reduce how much water Powell releases to Mead. That deprives the three Lower Colorado River Basin states, including Arizona, of additional water.

Phoenix Water Director Kathryn Sorensen counters, “The ‘risk’ of overconserving is a Colorado River that is less vulnerable to shortages and more resilient over the long run, a river that is more protective of our economy and our quality of life.”

Under guidelines approved in 2007 by the seven basin states, Lake Mead gets an extra surge of water from Powell in a year in which forecasters predict that Powell will stay above 3,575 feet while Mead falls below 1,075 feet on a given date.

This year, conditions are good enough that the lake is expected to get at least 9 million acre-feet, nearly 700,000 acre-feet above average. But if conservation pushes Mead’s forecast above 1,075 at the end of 2017, that extra water goes away.

“You could have an unintended consequence,” Ticknor said. “You have a narrow band of operating space with the reservoirs. You have to be careful about what you do.”

“Not a game of poker”

Phoenix’s Sorensen replied that playing the probabilities of shortage year-by-year is a short-sighted strategy that fosters uncertainty and keeps Arizona’s economy closer to the razor’s edge.

“This is not a game of poker. Arizona has weathered the last 17 years of drought precisely because generations ago, we planned methodically for the long run. We must continue this legacy,” Sorensen said.

State Water Resources Director Buschatzke said he prefers the risk of overconserving “because if you underconserve there isn’t much you can do about it” if a shortage occurs. Tucson Water Director Tim Thomure said authorities should err on the side of conservation and focus on the longer term.

“We have to be nimble enough to manage year by year, but decisions need to be made with the long-term in mind,” Thomure said.

The April runoff forecast is still expected to be high enough for an above-average release from Powell. But if the region experiences the flip side of the “Miracle May” rains that pounded the Rockies in May 2015 — saving the river from an almost certain shortage — that wouldn’t leave authorities much time to forestall a 2018 shortage, Buschatzke said.

“These are hard issues — harsh decisions. I want to err on the side of more certainty,” he said.

The bottom line is that the water agency now can’t meet its goal of getting a water-saving plan to this year’s legislative session for approval, he said.

Photos: Glen Canyon Dam dedicated in 1966 after years of construction

Photos: Snow on Mt. Lemmon and the Catalina Mountains

Storm dumps up to 30 inches of snow.

Heavy rains over many days in January, 1993, resulted in flooding throughout Tucson and Southern Arizona.

That's because the Central Arizona Project would see a big savings in its energy costs to pump water.

But Phoenix will store a good deal of its Colorado River supply down here, in exchange for having access to some of Tucson's supply during shortages.

Lake Powell could dry up in as little as six years, study says

The worst could happen if Colorado River flows fall as low as they were from 2000 to 2005.

Cities, at the top of the Central Arizona Project priority list, are less concerned about the prospect of water-delivery reductions.

Cuts would reduce the unused water cities can store for a drier future. Farms would be hit, too.

The lake is now due to be 20 feet lower on Jan. 1, 2019 than the feds forecast a month ago, due to lower runoff this year than predicted.

The water level behind Hoover Dam was low in 2015, with a “bathtub ring” showing previous water levels clearly visible. Runoff from heavy snows is expected to refill the reservoir.