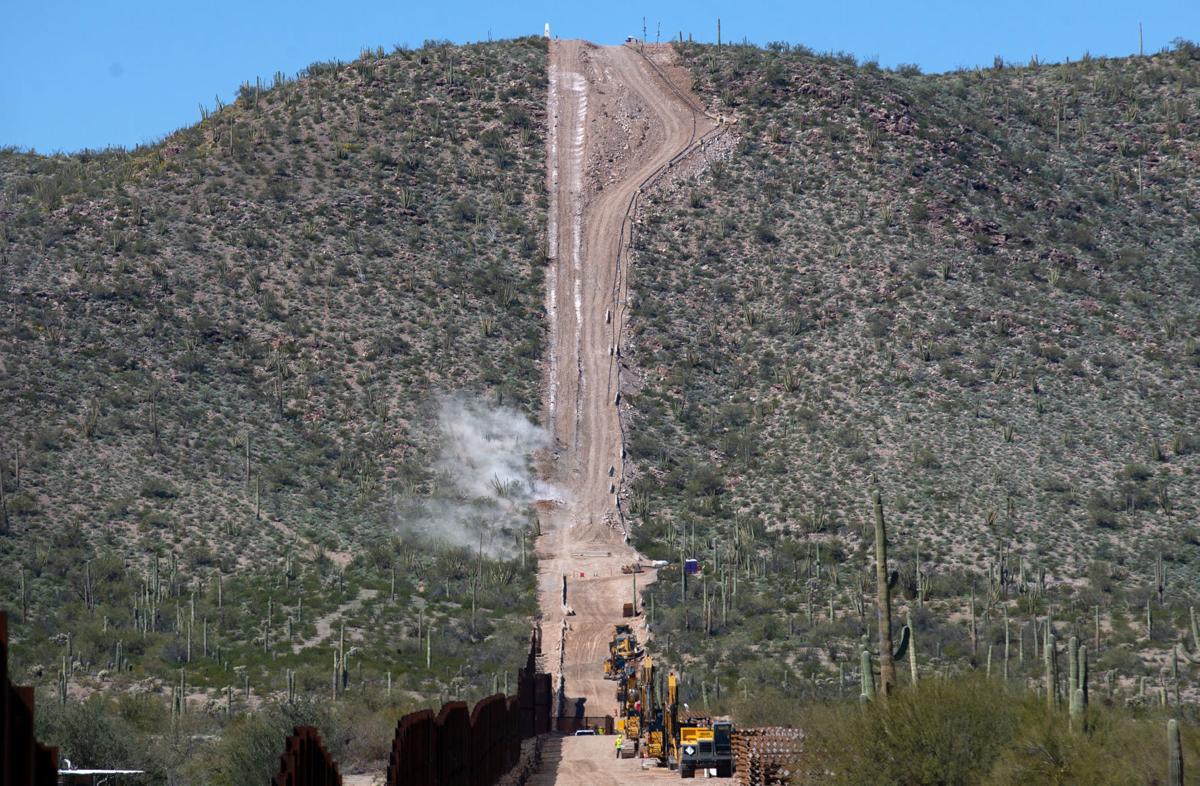 A construction crew performs a controlled detonation at the base of Monument Hill in Organ Pipe Cactus National Monument. 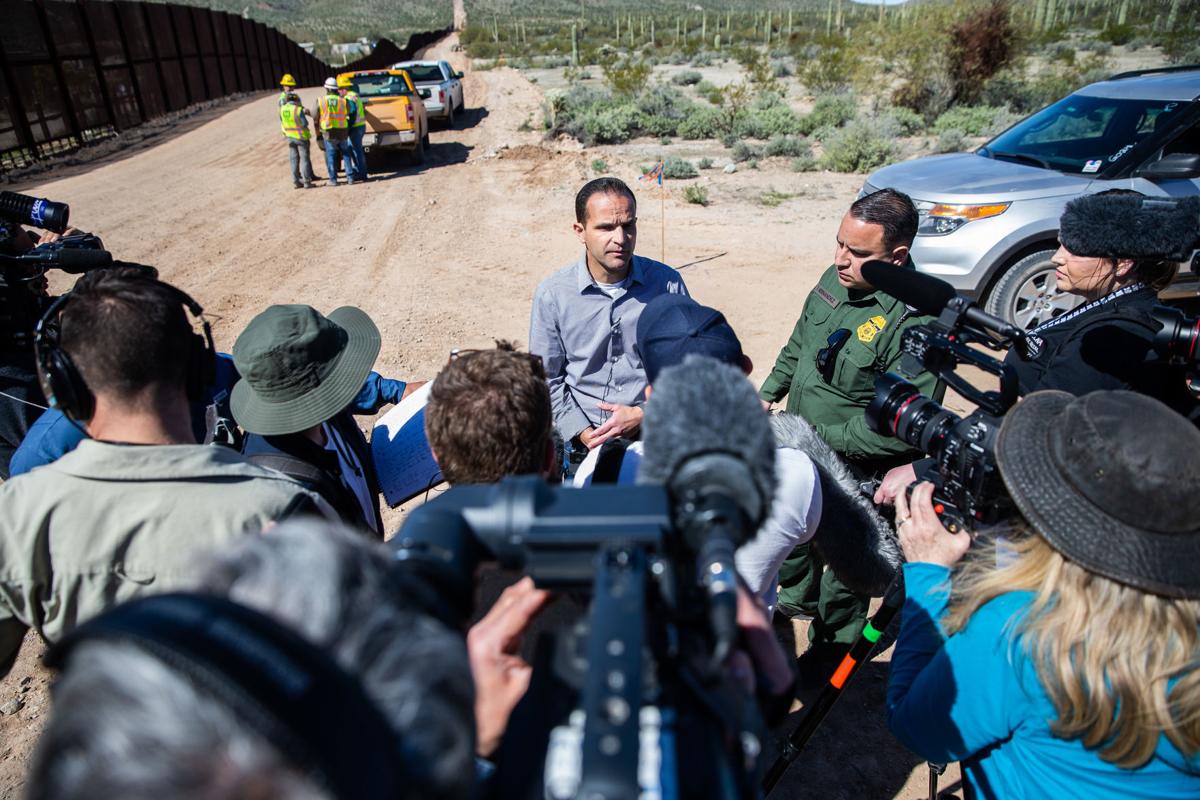 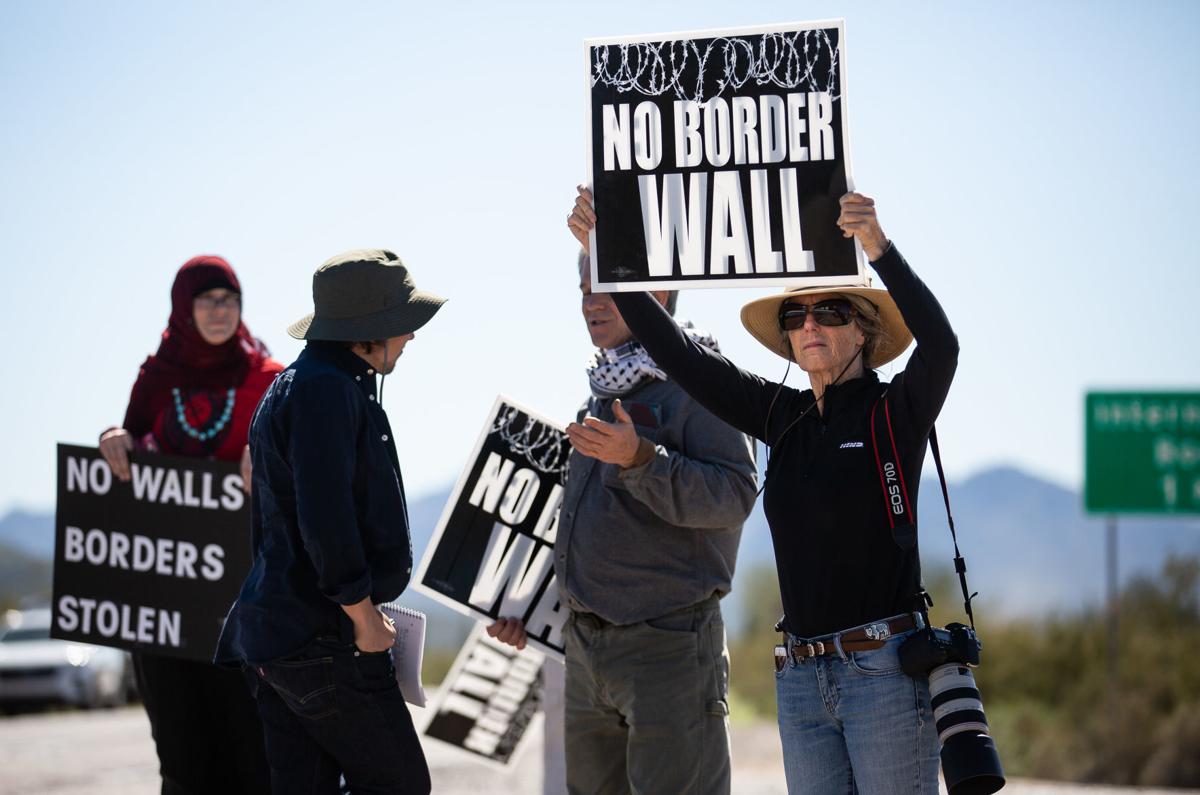 Activists protesting the border wall stand at the entrance of South Puerto Blanco Drive after the Border Patrol’s blasting demonstration on Monument Hill.

Weeks after controversy erupted over contractors blasting a hill considered sacred by the Tohono O’odham Nation to make way for the border wall, federal officials invited reporters to witness the explosions Wednesday.

Reporters could see the explosions from about 1,500 feet away Wednesday. A series of 86 holes, each filled with 5 pounds of ammonium nitrate explosives buried 10 feet underground were detonated along 250 feet of the borderline that runs over Monument Hill. A small plume of smoke briefly hung over the area, and the sound of the explosions reverberated for several seconds.

The explosions are meant to break up rock and allow contractors to erect a 30-foot-tall wall on the hill, which Tohono O’odham officials said was a burial site after Apache raids. These were the fifth detonations so far in the wall project on Organ Pipe Cactus National Monument.

Customs and Border Protection officials said no human remains or other artifacts were found in the area where explosives are used. The area is in the Roosevelt Easement, a 60-foot-wide strip of land controlled by the federal government that runs along the border in Arizona. The area on Monument Hill was previously disturbed a decade ago when a 15-foot-tall metal mesh fence was installed.

The blasting came just as Tohono O’odham Nation Chairman Ned Norris, Jr. spoke to members of Congress in Washington about the desecration of tribal land as a result of wall construction (see related story).

“No one reveres our military veterans more than the O’odham, however, dynamiting these sacred sites and burial grounds is the same as bulldozing Arlington National Cemetery or any other cemetery,” Norris said in a news release Wednesday.

“Our history as a people is being obliterated, and our ancestors’ remains are being desecrated,” Norris said. “Congress must act to restrict or remove DHS’s dangerously broad authority to waive cultural preservation laws and compel them to consult with tribes on these issues. Preserving these sites is important not only to the O’odham, but to the history and culture of the United States.”

The Trump administration has waived dozens of laws that protect the environment and historical artifacts to speed up the wall construction.

CBP puts “as much as emphasis as we can” on protecting cultural and historical resources, Jim O’Loughlin, senior project manager for CBP, told reporters Wednesday.

Surveyors found three sets of human remains near Quitobaquito Springs last fall, about 10 miles west of Monument Hill, said Paul Enriquez, a director of the CBP office overseeing wall construction. The remains were in the form of “very, very small fragments” of bone that officials believe were washed into the construction area by rain.

A few miles north of Lukeville on Arizona 85, a dozen protesters gathered to show their opposition to the border wall.

“These people want to destroy what is sacred,” said Victor Garcia, a member of the Tohono O’odham Nation.

By planning a blasting demonstration for reporters, CBP was making a “spectacle” of the “desecration” of Tohono O’odham land, Garcia said.

He said he hoped that Norris was “giving words to what is happening” before Congress.

Dan Millis, an organizer with the Sierra Club, helped hold a banner reading “No wall of hate.”

Millis called the border wall a “campaign prop for a hateful campaign” that was built on a “rhetoric of racism and xenophobia.”

Rather than spend money on addressing the root cause of migration or creating a path to citizenship, billions of dollars were spent on the wall, he said.

“That’s the message the wall sends: ‘We have the power; you don’t,’” Millis said.

Moments later, a woman in a van drove by and called out to the protesters, “I want the wall.”

So far, nearly 9 miles of wall have been built on Organ Pipe, O’Loughlin said. Eventually, the two wall projects in the area will extend along 43 miles of the border in Organ Pipe and the adjacent Cabeza Prieta National Wildlife Refuge.

O’Loughlin said CBP is looking at building 20 to 30 more miles of wall in Arizona, beyond the already announced projects in Organ Pipe, Cabeza Prieta, Cochise County, and near Yuma. He said he did not know where the new miles would go up.

CBP does not plan to put spikes on top of the wall or paint the wall black, O’Loughlin said. Lights will go up after the wall and new roads are built.

The Tucson branch of the Confucius Institute teaches Mandarin and provides Chinese cultural education. It is set to close this summer.

Scott Warren, a teacher with a doctorate in geography and a No More Deaths border aid worker, was among people charged with misdemeanors related to their humanitarian aid efforts along the border.

Border Patrol agents tracked down two F-250 pickup trucks bearing logos of the contractor building the border wall that they say were used to smuggle people.

A construction crew performs a controlled detonation at the base of Monument Hill in Organ Pipe Cactus National Monument.

Activists protesting the border wall stand at the entrance of South Puerto Blanco Drive after the Border Patrol’s blasting demonstration on Monument Hill.