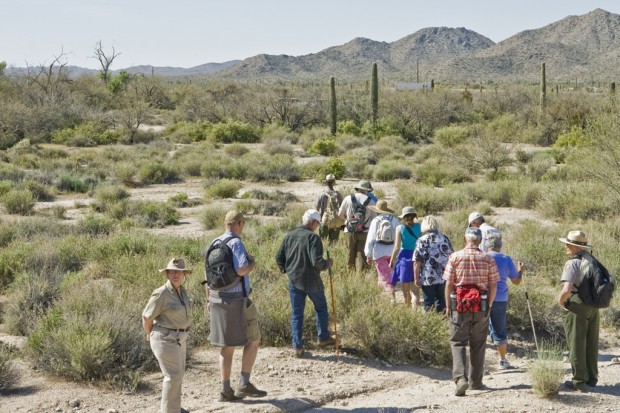 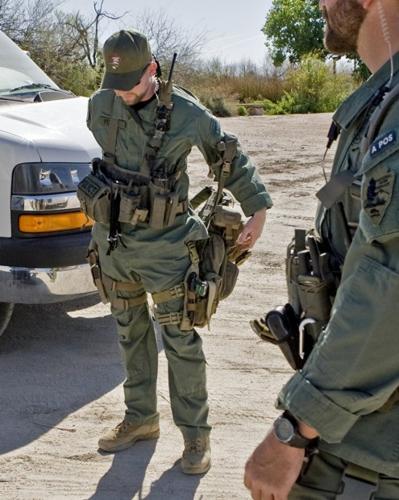 Park rangers stand down after providing security for the tour on March 13. 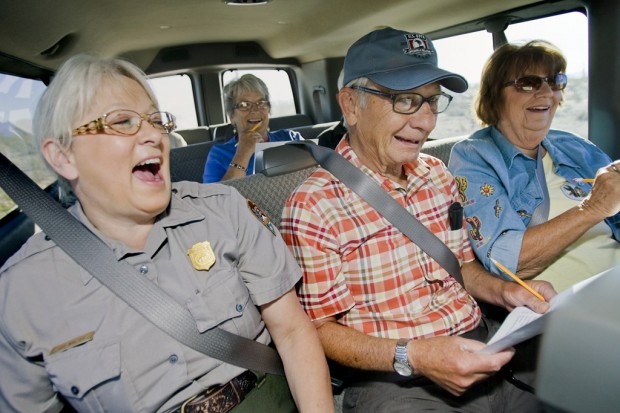 From left, chief of interpretation Sue Walter, Marilyn Wall, Carl Schorzman and Mona Schorzman listen to the tour guide's comments during their trip. 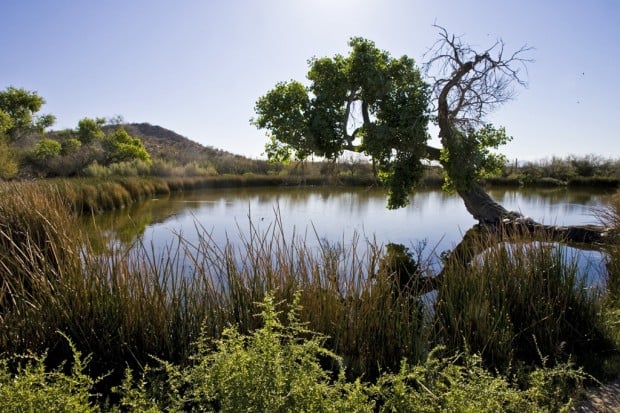 The pond at Quitobaquito Spring in Organ Pipe Cactus National Monument is a natural desert oasis fed by a spring. 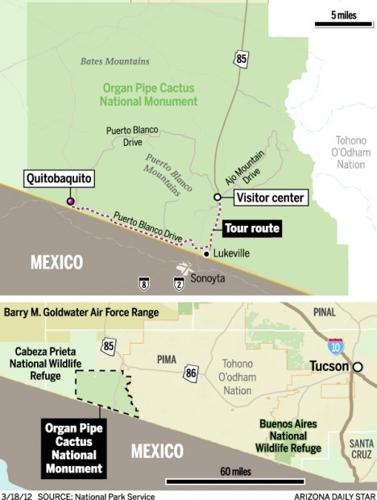 QUITOBAQUITO - It was a tour of public lands with splendid scenery, a glib guide - and lethal firepower on hand just in case.

The tour last week - to Quitobaquito Spring at Organ Pipe Cactus National Monument south of Ajo - was guarded by federal officers armed with assault rifles and other weapons.

"It's because of the perception that exposure to human and narcotics smugglers is a bad thing for the visiting public," said Matthew Vandzura, chief ranger at the monument on the Mexican border.

Sardius Stalker, a seasonal park ranger who led last week's tour, put it another way: "It's like going into a bad neighborhood" where protection by "armed escorts" is essential.

A quick glance back in time can help explain the need for armed protection on a public park tour.

The Quitobaquito site - a natural oasis in the desert fed by a gushing spring - and many other parts of the 330,689-acre monument have been closed to the public without escorts for much of the past decade.

Smuggling of people and drugs across monument lands had been increasing for years when a single event slammed home the hard fact of deadly danger in the area.

"Now, 33.32 percent (of the monument) is open to the public without escort - for daytime use only," Vandzura said.

The remaining two-thirds of the preserve is closed to the public without an escort - mainly because of the danger of encounters with smugglers.

The escorted tours to Quitobaquito, which began several years ago, amount to an effort to reclaim turf from smugglers while protecting tour participants from excessive risk.

So far, Vandzura said, no tour groups have encountered smugglers. But he said some tours have been canceled before getting under way because rangers got information that smugglers might be in the area.

The road mostly parallels the border, which is lined on the U.S. side with vehicle barriers designed to thwart smugglers. Passengers in the vans could see traffic whizzing by just across the international line on Mexican Highway 2.

Just ahead of the vans was a park service vehicle with some of the escorts, who are park service law enforcement specialists.

Stalker, an animated guide serving up a wealth of nature and history lore during the drive, said people taking part in a hike around the spring site probably wouldn't even see the armed guards.

They "kind of lurk in the bushes" out of sight while keeping a close watch on the touring party, he said. "They try to be inconspicuous, but they're close - within earshot."

Indeed, the guards remained mostly out of sight as tourists - flanked by Stalker and monument volunteers - walked around the Quitobaquito lagoon and learned about plants and wildlife in the area.

Sue Walter, the monument's chief of interpretation who accompanied the tour, provided some specifics on the guard detail, which rangers prefer to refer to as escorts.

"Four of them are out here," Walter said. "They sweep the area ahead of time" and then observe the tour group from watching posts on hillsides and in the brush.

"It's an insurance policy," she said. "You don't expect anything to happen - but just in case."

Patrick O'Driscoll, a public affairs officer for the National Park Service, said the guards are in place "because it's a closed area, and we have to take basic precautions when we go in. It's maybe a little like a detail protecting the president."

Near the end of the tour, a reporter spoke briefly with one of the guards.

"The goal for us is to maintain visitor safety and stay out of sight," he said.

Participants in last week's tour were asked for their reaction to the presence of armed guards. Here are some of their responses.

•Yvette Magee from British Columbia in Canada: "The guards? They don't bother me."

• Rolf Doebbelin, a native of Germany who lives in Egypt: "It's great to see this place has been reopened (for escorted tours). But it's a bit of a challenge because of the border situation. They (the guards) are in hiding, so we don't see them."

• Brad Schrotenboer of Chicago: "I don't even notice it. I feel completely safe, and it's great to get to come to an area that's not usually open."

• Marilyn Wall of Idaho: "I like being out here in the desert, so I can live with it. But it's just sad that it's needed."

TAKING BACK THE LAND

Officials say they are re-evaluating closed areas in hopes of opening more of the monument to the public without mandatory escorts.

"We're looking at the possibility of opening up 10 percent more of the monument to the public," said chief ranger Vandzura. "My gut feeling is that (smuggling) traffic is consistent or maybe at a slight downward angle."

Vandzura said park rangers, working closely with agents from the U.S. Border Patrol, might identify some areas that could be reopened.

He emphasized that no decisions have been made on the matter.

On StarNet: See more photos related to this story at azstar net.com/gallery

• The tours are free, but visitors to the monument pay an $8 per vehicle entrance fee.

Organ Pipe Cactus National Monument, set aside as a federal preserve in 1937, is home to 28 cactus species and a diverse population of other desert plants and animals.

"We're looking at the possibility of opening up 10 percent more of the monument to the public. My gut feeling is that (smuggling) traffic is consistent or maybe at a slight downward angle."

A tour of Quitobaquito Springs in Organ Pipe Cactus National Monument south of Ajo is unlike any other in the country.

A tour of Quitobaquito Springs in Organ Pipe Cactus National Monument south of Ajo is unlike any other in the country. The tour to the scenic …

Park rangers stand down after providing security for the tour on March 13.

From left, chief of interpretation Sue Walter, Marilyn Wall, Carl Schorzman and Mona Schorzman listen to the tour guide's comments during their trip.

The pond at Quitobaquito Spring in Organ Pipe Cactus National Monument is a natural desert oasis fed by a spring.