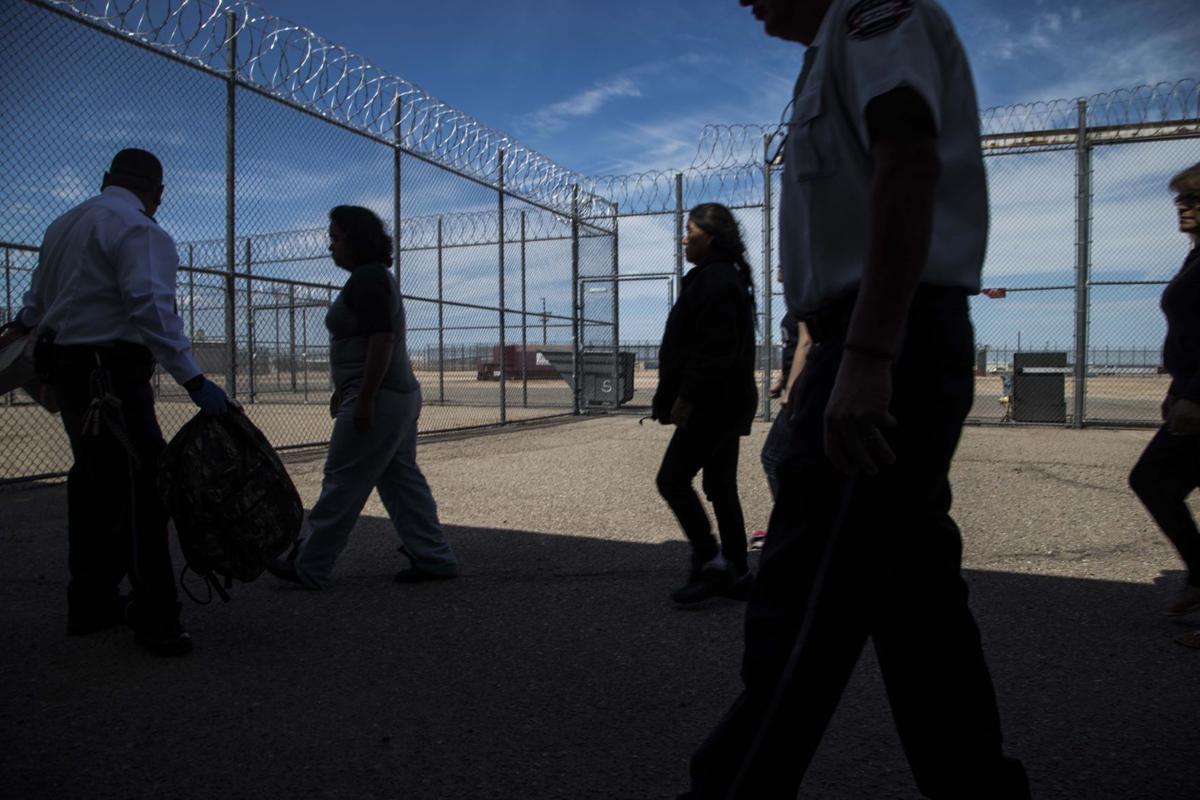 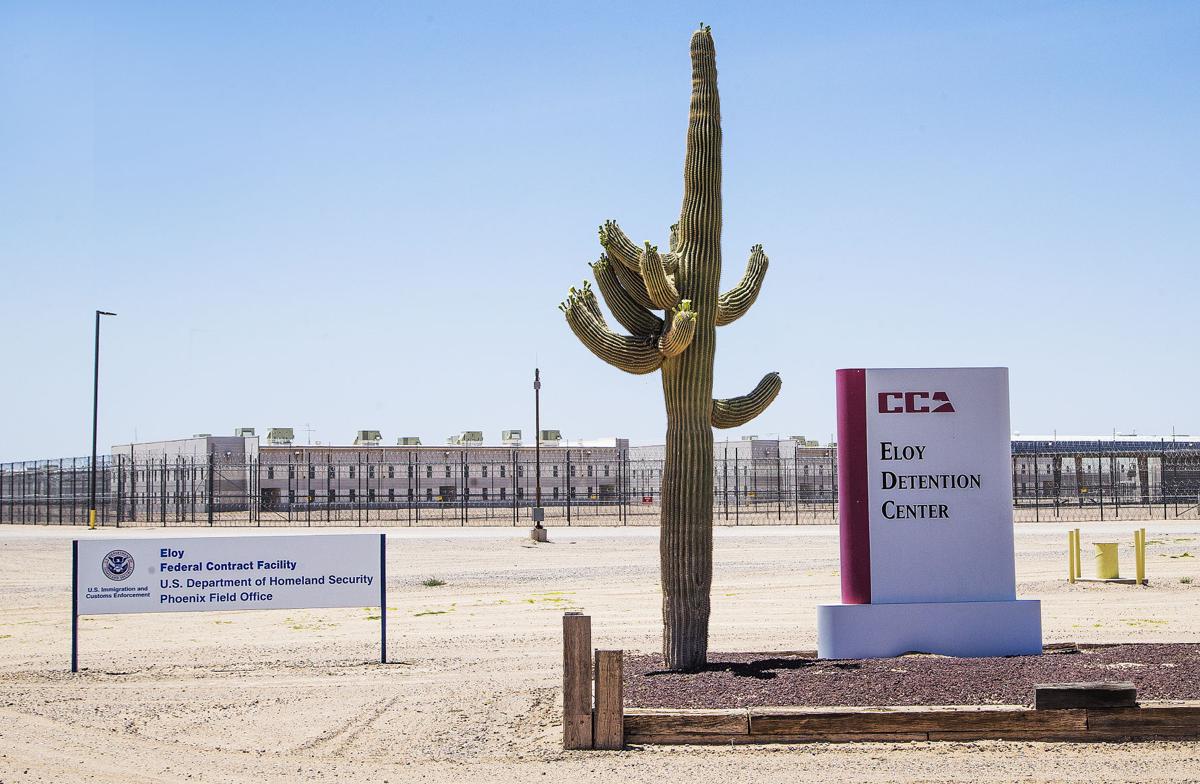 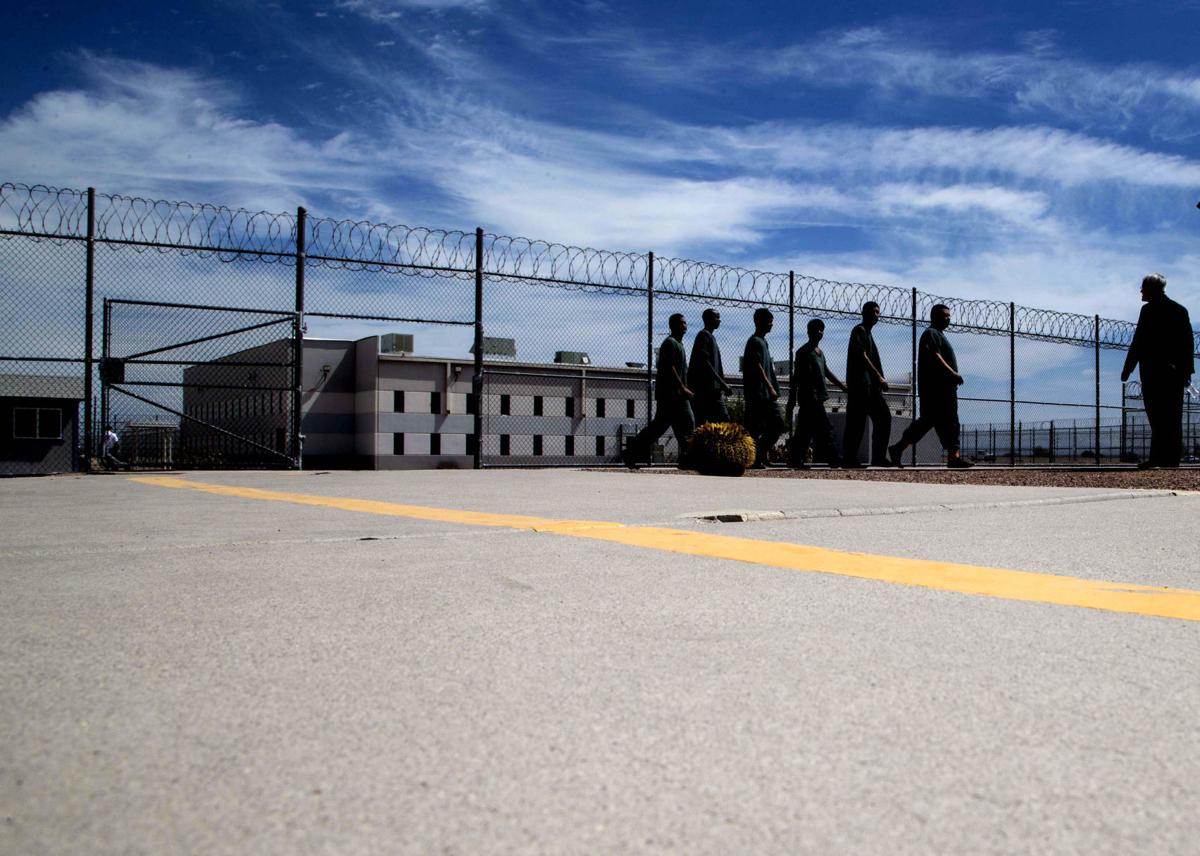 Detainees step out for lunch at the Eloy Detention Center. There have been 15 in-custody deaths at the center since 2003. 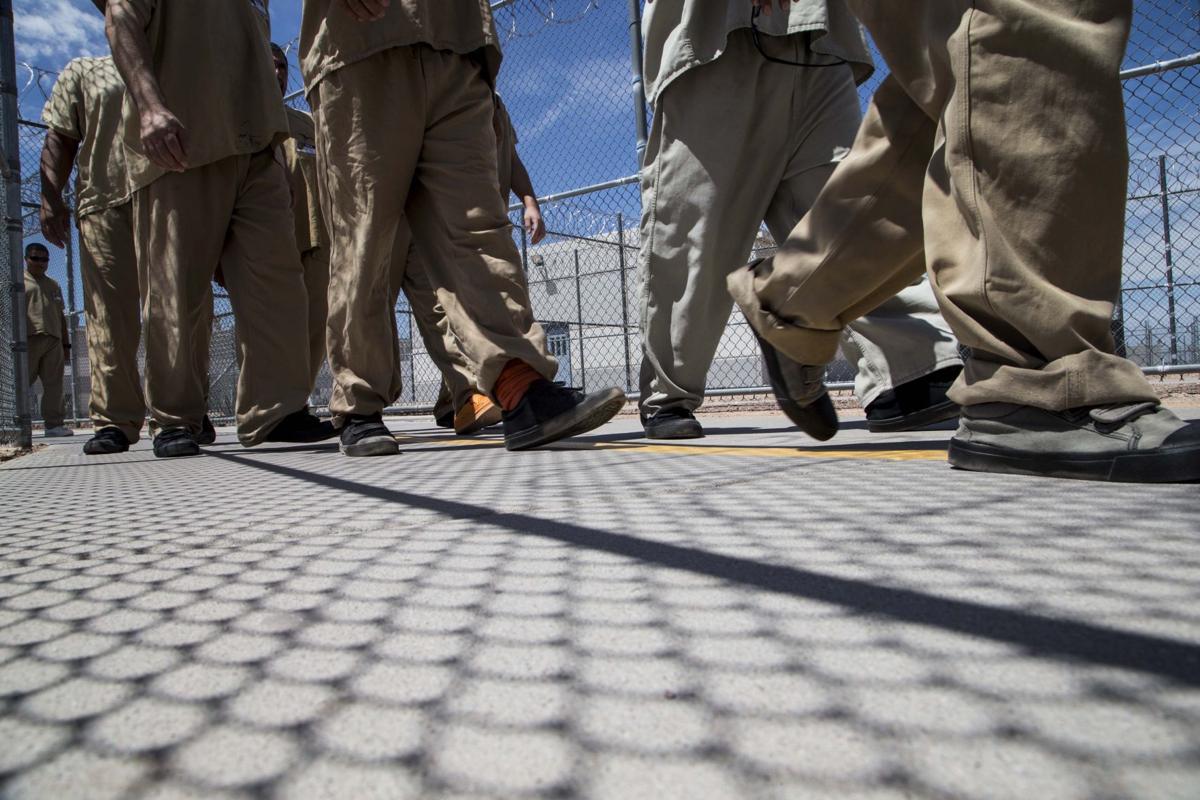 Conditions inside immigration detention centers during the pandemic are widely criticized by advocates, immigration lawyers, and immigrants held in the facilities. 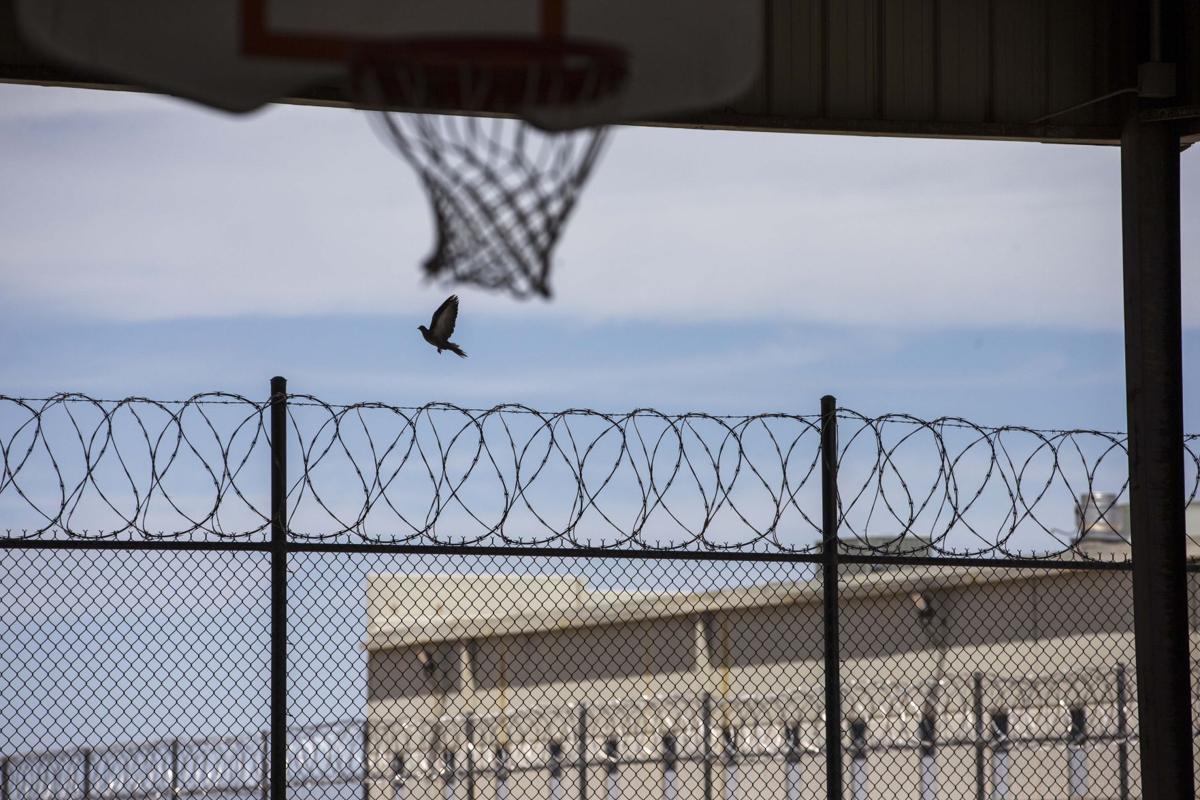 Recreational facility at The Eloy Detention Center on July 28, 2015.

Taxpayers started footing the bill for housing Ivan Moreno Miranda shortly after a Border Patrol agent caught him on Jan. 14.

Moreno Miranda crossed the border illegally near Douglas after being deported in 2013, federal court records show. The U.S. Attorney’s Office filed criminal charges against him and on Jan. 17 he was placed in the custody of the U.S. Marshals Service while his case unfolded, at a daily detention cost of about $80.

Those expenses can escalate quickly.

A similar, but longer and costlier, story played out with David Borrayo Fajardo, who was also sentenced Thursday. He was caught in October near Ajo, crossing the border illegally a month after being deported. He had a series of criminal convictions from the early 1990s, including aggravated assault when he was 19 years old, according to a sentencing memorandum.

In the last decade, housing people on immigration-related charges in Southern Arizona cost taxpayers more than $1.8 billion, according to statistics obtained by the Arizona Daily Star through public-records requests.

The Marshals Service spent about $1.1 billion in Southern Arizona housing people on similar charges in fiscal years 2007-15, according to agency records obtained through a Freedom of Information Act request.

More than 90 percent of those funds, or about $1 billion, went to the Central Arizona Detention Center in Florence owned by CoreCivic, formerly known as Corrections Corporation of America.

In all, detaining illegal immigrants in Southern Arizona cost taxpayers well over $2 billion in the past decade, not including the costs of the Border Patrol’s holding facilities, where illegal immigrants are held for hours or days after an agent catches them near the border.

Those costs could continue to rise as federal agencies put in motion the Feb. 20 directive from Department of Homeland Security Secretary John Kelly to end the policy of “catch-and-release” of illegal immigrants, in which authorities issue notices to appear at removal hearings, rather than take them into custody.

To keep pace with the expected rise in detainees, Kelly directed ICE and U.S. Customs and Border Protection to “allocate all available resources to expand their detention capabilities and capacities at or near the border with Mexico to the greatest extent possible.”

In an April 11 memo, U.S. Attorney General Jeff Sessions directed federal prosecutors in border states to prioritize a variety of immigration-related crimes and to develop guidelines for prosecutions “to accomplish the goal of deterring first-time improper entrants.”

A memo from the U.S. Attorney’s Office describing new plea agreement policies indicates the federal court in Tucson will see more felony prosecutions of immigration-related crimes, such as crossing the border illegally after deportation.

“These are the ‘bad hombres’?” Carrillo continued. For many of his clients, “their criminal history is a bunch of immigration violations.”

What we don’t know

Despite spending $760 million of taxpayer money, ICE declined to allow the Star to tour detention facilities, provide the number of ICE detainees in Southern Arizona, or provide the daily cost to house a detainee.

The Border Patrol did not respond to requests for information about the use of various enforcement tools; where illegal immigrants are sent after leaving Border Patrol custody; or statistics on the agency’s prosecution programs.

The U.S. Attorney’s Office did not respond to a request for information about how prosecutors decide to file criminal charges in immigration-related cases, how those decisions evolved in the last decade, and how new policies affect those decisions.

Without information from official sources other than the Marshals Service, the Star used interviews with defense lawyers, agency reports, and court records to sketch the outlines of how the immigration detention system works in Southern Arizona.

Illegal immigrants take a myriad of paths through the detention system, but they can be divided roughly into two basic paths: criminal and administrative.

On the path that involves criminal charges, a federal prosecutor decides whether to charge a detainee at a Border Patrol station with illegal re-entry, the legal term for crossing the border illegally after being deported, or another immigration-related crime.

If criminal charges are filed, defendants are taken into custody by the Marshals Service — which Fidencio Rivera, chief deputy U.S. marshal in Arizona, described as the “federal sheriff’s office” — while their cases are prosecuted.

About one-third of the people apprehended by the Border Patrol in the Tucson Sector are charged criminally. For fiscal years 2011-16, about 580,000 apprehensions resulted in about 205,000 prosecutions, according to the Border Patrol’s annual sector profiles.

While Moreno Miranda and Borrayo Fajardo went through a monthslong process of prosecution, thousands more immigration-related cases are handled through fast-track prosecution programs, such as Operation Streamline, and usually are resolved in a matter of days.

After Borrayo Fajardo’s sentencing Thursday to one year in prison, with credit for time served, the Marshals Service will take him to a Federal Bureau of Prisons facility, court records show. The judge recommended he be placed in an institution in or near Arizona.

On the administrative path, Moreno Miranda was sentenced to time served and will not be taken to federal prison. Instead, ICE likely will place him in a detention center while he is processed for deportation.

ICE also takes custody of illegal immigrants when they are released from county jails or after federal prosecutors decline to file criminal charges.

During fiscal years 2007-15, ICE handled 110,000 administrative arrests in Arizona, according to the Department of Homeland Security’s Office of Immigration Statistics.

Detainees can remain in ICE custody for a few days or for many months, depending on whether they choose to appeal their removal order, apply for asylum, or if their country of origin delays in issuing travel documents.

In a separate administrative path, Border Patrol agents use expedited removal, which allows for deportation without involving an immigration court.

A recent report by the Migration Policy Institute on the Border Patrol’s “consequence delivery system” showed about half of the Tucson Sector apprehensions researchers could track in fiscal year 2014 resulted in expedited removal, 26 percent were prosecuted and 12 percent led to voluntary returns and notices to appear.

Where the money went

Statistics provided by ICE showed where detention dollars were spent in Southern Arizona for fiscal years 2013-16, but for previous years the agency provided only annual spending totals.

The Marshals Service guarantees payment for 3,420 beds at CoreCivic facilities, Rivera said. The agency also uses 293 beds at the Federal Correctional Institution-Tucson, but does not pay for those beds.

Rivera declined to provide the daily bed rate charged by CoreCivic, citing concerns about competition for the government contract.

The daily cost at the Federal Bureau of Prisons facilities comes to $88, according to calculations included in presentence reports in immigration-related cases.

CoreCivic has come under fire for 15 in-custody deaths at the Eloy Detention Center since 2003 and immigrant-rights activists decry a profit-making motive behind incarceration.

CoreCivic did not respond to a request for comment. But Rivera said the company’s facilities are the only places that can handle the volume of detainees handled by the Marshals Service.

“We couldn’t do our jobs without them,” Rivera said.

The company also saved the agency money by building a medical facility, Rivera said, which helped avoid the costly practice of sending deputy marshals to guard inmates at local hospitals.

U.S. District Court Judge David Bury in Tucson said it is a violation of the rights not to have clean bedding and other amenities for detainees.

Agency said enforcement there is normal, but lawyer says timing was unusual.

The 39-year-old Mexican man was being held at the Florence Detention Center.

Several new efforts aim to prevent families from being separated

The 39-year-old was outside the medical unit at the Florence Detention Center.

Priorities clash: New arrivals are a priority to be detained, but pregnant women are supposed to be released.

They continue to pour into Tucson's Greyhound station.

After wandering the streets of Nogales, Sonora, for a week — alone, with $30 in her pocket and limited Spanish — Sandra Lopez said she did the…

Agencies keep details under wraps regarding $2B in illegal-immigration detention

Three federal agencies declined to provide public information for a story dealing with more than $2 billion in taxpayer funds.

Three young girls were visiting their grandparents in 2012 when man entered bedroom and attacked them, officials said.

Under plan, Mountain Vista would be absorbed by Golder Ranch.

Shackles no longer required on all federal defendants in Tucson

Chains taken off only while defendants are in courtroom.

Border Patrol arrests on the entire U.S.-Mexico border fell to the lowest total since fiscal 1971.

The judges rejected arguments that having to provide the mats would be a hardship for the federal agency.

This is improper for two reasons, the Office of Inspector General said in a recent report

Detainees step out for lunch at the Eloy Detention Center. There have been 15 in-custody deaths at the center since 2003.

Conditions inside immigration detention centers during the pandemic are widely criticized by advocates, immigration lawyers, and immigrants held in the facilities.

Recreational facility at The Eloy Detention Center on July 28, 2015.