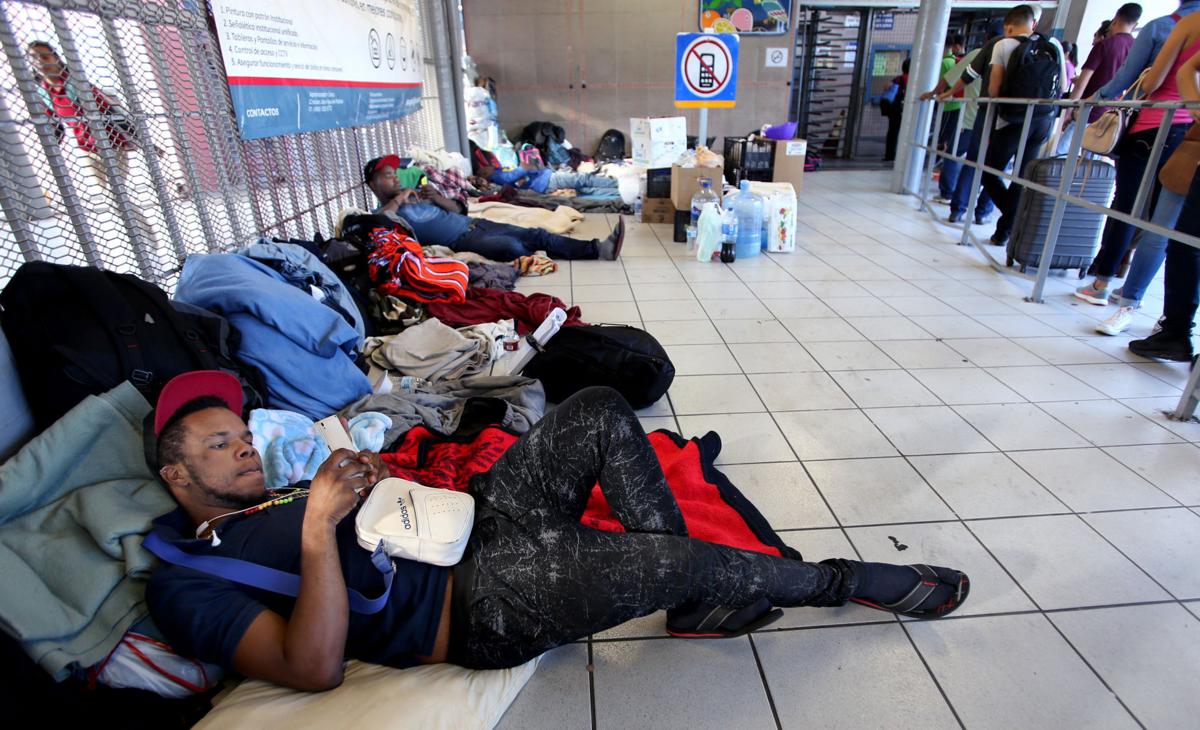 Lamitie Maxime uses his cellphone while holding his place in a line of Haitian refugees at the port of entry in Nogales, Sonora. Maxime, who traveled overland from Brazil, and dozens of other Haitians have chosen Nogales because it is a less congested port.

Refugees huddle around one of the few available electric outlets to charge their phones at the port of entry in Nogales, Sonora.

Dozens of Haitian migrants are camped out at the Nogales, Sonora, port of entry awaiting a chance to speak with U.S. immigration officials.

They are just a few of the roughly 5,000 Haitians who have arrived at the U.S.-Mexico border in recent months. The head of U.S. Immigration and Customs Enforcement said another 40,000 are on their way to the border.

Since May, the influx of Haitians without immigration documents was centered in Tijuana, where more than 4,300 Haitians have arrived since October 2015, up from 339 the previous year, U.S. Customs and Border Protection records show. But in recent weeks, Haitians started trying to cross in Mexicali and San Luis Rio Colorado, just across the border from San Luis, Arizona.

On Tuesday, Haitian migrants milled around the pedestrian entrance to the Nogales port, napped on top of backpacks and bundles of clothes, or hunched over their phones next to a public electrical outlet.

Many had traveled for months with hopes of finding work or reuniting with relatives living in Florida, New York, and other states. Along the way they walked for days at a time, rode buses and trains, and paid guides to get them through Peru, Colombia, Panama, Costa Rica, Nicaragua, Honduras, Guatemala and Mexico.

On his doctor’s advice, Lamitie Maxime, 28, left Tijuana and headed to Nogales, Sonora.

Hundreds of his fellow Haitians were waiting to cross into the United States through the Tijuana port of entry, which meant he wouldn’t speak with a U.S. immigration official until December.

Maxime suffers from a painful condition and the precarious existence of being a migrant didn’t bode well for getting access to medical care, much-needed after two months of traveling overland from Brazil.

So he decided to try his luck at a less congested port, as did Leaureant James, 31, who headed directly to Nogales on a friend’s suggestion as soon as he entered Mexico.

“We’re here looking for a better life,” James said, noting the dangerous conditions his family faces in Haiti and a lack of jobs in Brazil, where he spent eight months trying to find work.

Fonsner Saintil, 27, plans to wait as long as it takes for him to get into the United States.

“If you have a chance of getting in, you’ve got to try,” the native French speaker said in Portuguese, a language he picked up while living in Brazil.

Many of the migrants waiting in Nogales left Haiti several years ago and headed to Brazil in search of work, Saintil said. He spent two years working as a cook before the Brazilian economy soured earlier this year and he decided to head north.

“The moment came in the economic crisis where I had gone seven months without work,” Saintil said, adding, “It’s even harder to find work in Haiti.”

The first of about 60 Haitians — the number changes daily — arrived in Nogales, Sonora, last Wednesday, said the Rev. Sean Carroll, executive director of the Kino Border Initiative, a Jesuit ministry that aids migrants in Nogales, Sonora.

In the meantime, the migrants are sleeping in the covered walkway leading up to the port and guarding their spot in line, which will determine the order in which they can petition U.S. officials to cross the border. So far, the pace is about five each day.

Pancho Olachea, a Mexican man who was deported from Phoenix eight years ago and now runs an informal ambulance service in Nogales, Sonora, shuttles the Haitian migrants to a shelter where they can eat breakfast and shower.

As Olachea chatted with the Haitian migrants on Tuesday afternoon, he also picked up a Guatemalan woman and her three children — four of the 20,000 Guatemalan citizens traveling as families who have arrived at the U.S.-Mexico border in the last year without immigration documents — and took them to the shelter.

CBP said in a statement Tuesday the agency is “accustomed to dynamic changes at our local border crossings, and are able to flex resources to accommodate those changes.”

For the Haitian migrants in Nogales, Sonora, going back to Haiti would be returning to a life of poverty and hardship.

James said the best he could hope for in Haiti was a job paying $6 a day.

“That’s not even enough for food,” James said. “If you have a family, how do you pay for school?”

Beyond the lack of decent jobs, the migrants in Nogales, Sonora, pointed to larger problems.

Elections in Haiti are seen as corrupt and for many years have not been held regularly, they said. The current president has held office for a year past the end of his term. In addition, access to basic services, such as water, is inconsistent and dangerous at times. Nearly all of Haiti’s schools are private, which adds to the daily economic burden.

Still, the migrants said they help their families in Haiti as much as possible and haven’t forgotten their homeland.

Their future after they speak with an immigration official is uncertain.

After a 2010 earthquake in Haiti, the U.S. government stopped sending Haitians back to their country. The following year, the policy changed, and Haitians convicted of a serious crime or posed a national security threat were removed to Haiti.

On Sept. 22, Department of Homeland Security Secretary Jeh Johnson said in a statement the “situation in Haiti has improved sufficiently to permit the U.S. government to remove Haitian nationals on a more regular basis,” as is done with other countries.

However, Johnson said the agency would screen Haitians who express a fear of returning to Haiti and refer those with credible fears to immigration court, where they can apply for asylum or other relief.

For Haitians who have lived in the United States since 2011, the temporary protected status granted after the 2010 earthquake was extended to July 2017, Johnson said.

The arrivals are processed on a case-by-case basis, CBP said this week. Individuals without immigration documents are placed in ICE custody while their removal proceedings unfold.

More than 2,800 Haitians were in ICE custody as of Oct. 20, ICE said in response to questions from the Star.

Plant-based chIcken nuggets come to the US market

Plant-based chIcken nuggets come to the US market

What Trump might do: Can he build a border wall?

One of President-elect Donald Trump’s signature campaign promises was building an impenetrable wall on the U.S.-Mexico border — and making Mex…

A viral video classic. This Haitian weatherman should be there at your next comedy open-mic night.

Lamitie Maxime uses his cellphone while holding his place in a line of Haitian refugees at the port of entry in Nogales, Sonora. Maxime, who traveled overland from Brazil, and dozens of other Haitians have chosen Nogales because it is a less congested port.

Refugees huddle around one of the few available electric outlets to charge their phones at the port of entry in Nogales, Sonora.